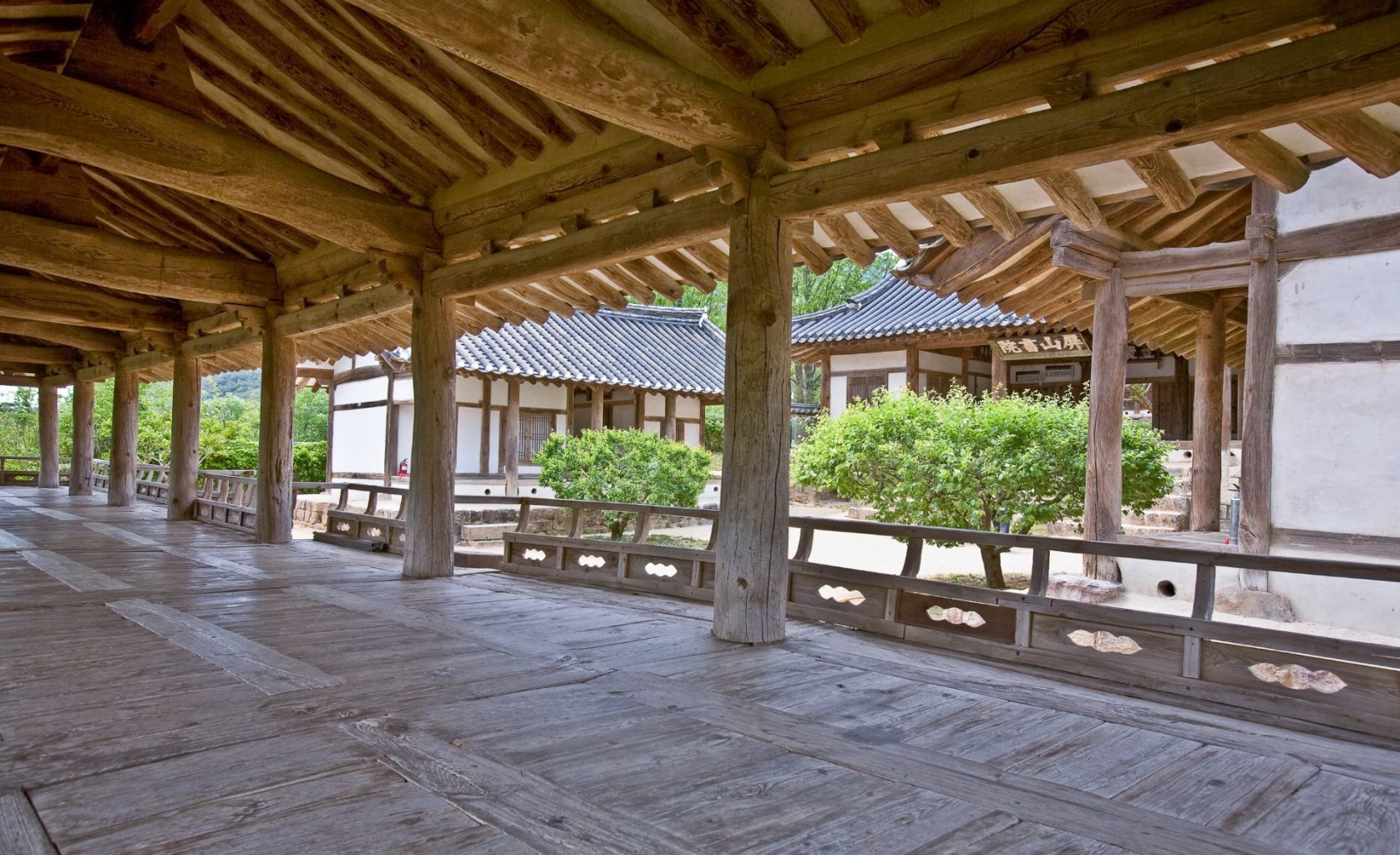 As an architecture student here in South Korea, I have had the unique opportunity to get the inside scoop on how Hanoks are made and restored. Here are a few unique features that make traditional Korean buildings so special.

Table of Contents
A Brief History of Hanoks
Characteristics of Hanoks
The Ideal Hanok Location: Pungsu
Hanoks: Rooms and Configurations
The Restoration of Hanoks

A Brief History of Hanoks

In the expedited process of modernization in South Korea, people’s lifestyles changed at a rapid rate. Naturally, what homes look like also changed rapidly to match modern living standards. Hanok (한옥), which was a typical Korean dwelling, failed to meet the new needs of a rapidly industrializing world. Traditional buildings were demolished and high rises were built. In the space where just one family lived in a single Hanok building, you could build an apartment that housed 100.

That is why by the middle of the 20th century most Hanoks had been demolished. But in the late 20th century to the beginning of the 21st, there was started a conservation movement began. During this time, we have seen the restoration and rebuilding of the remaining Hanoks. These buildings represent a valuable architectural heritage. The buildings have a unique combination of natural, cultural, and social aspects of architecture. Before the modern age, the test of time, with the same architectural style lasting hundreds of years.

Hanoks are known today as the traditional buildings of South Korea. However, only around 20 to 30 percent of buildings during Joseon’s collapse were Hanok-style buildings. Average Korean families lived in ChogaJib (초가집). These were homes that had straw roofs and were generally made using clay, stones, and wood. 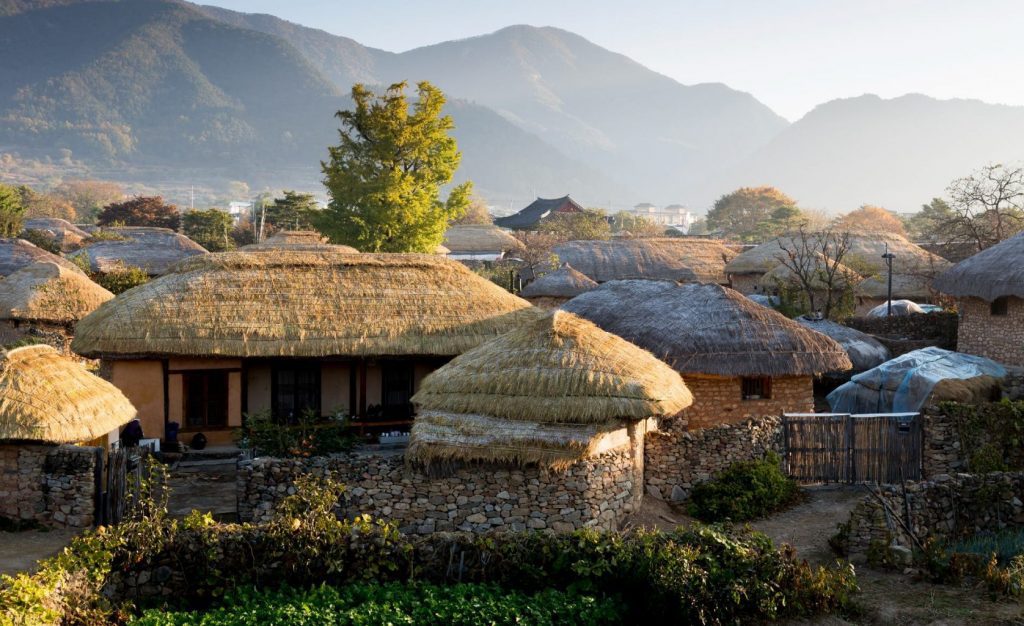 Hanok homes were generally reserved for the upper class. They are characterized by tile roofs, ondol heating systems, wooden frames, and paper planning.

One of the most important things before the construction of a Hanok was to select a conductive site according to geomancy or pungsu – a Korean type of feng-shui.  According to this method, the main gate of Hanok is placed in the South. In addition, there should be a mountain to the North, and a river flows in front of the site. If this site is chosen correctly, wealth and fortune will await the owner.

In general, you can find these same basic components throughout the country.

If you look at the image above, you can see the Hanok layout typical for each region in the Korean peninsula. In the north and east, you will see square configurations. In Seoul, you will find U-shaped Hanoks. Then, in Busan, L-shaped Hanoks are the most common. Finally, in Southern regions, such as Jeju, linear Hanoks are common.

The Restoration of Hanoks

Today, thanks to the government’s work on Hanok conservation, we have a chance to see and fully feel the ethnic culture of traditional dwellings in modern Korea. There are lots of Hanok-style cafés, museums, hotels, guest houses, and even offices you can visit.

These places are very popular not only among tourists but locals too. Such experience lets you dip into the long-forgotten atmosphere of living alone with nature. Moreover, thanks to the feeling of comfort that Hanok gives, cafes and tea houses are in high demand for meetings with friends and acquaintances. They have become a main attraction for relaxation. 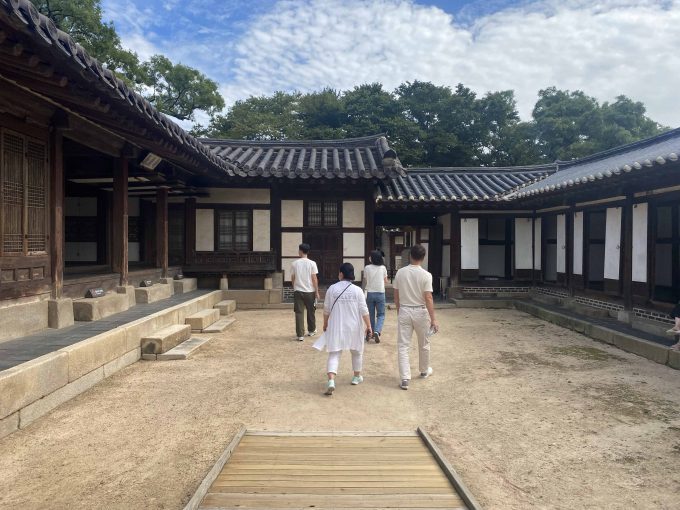 The first place to see Hanok if you are currently in Seoul is Bukchon Hanok Village. It was the first project focused on the conservation of Hanok buildings led by the Seoul Metropolitan Government. The Bukchon Conservation Project was a 10-year-long effort that started in 2001 to protect the area and improve the living conditions of residents.

The Bukchon area was a residential quarter for high-ranking Joseon officials and nobility (yangban). It had an advantageous position between Gyeongbokgung and Changdeokgung palaces. Additionally, the entire neighborhood was favorable in terms of pungsu. On the north, the site is surrounded by mountains, on the south, a river flows.

The traditional village is made up of lanes of houses that have been preserved to showcase 600 years of the city’s history. Many of these hanoks operate as cultural centers, guest houses, restaurants, and tea houses providing visitors with the opportunity to experience, explore, and immerse themselves in traditional Korean culture.

However, there is currently a problem with tourists disturbing local residents. Each weekend, people flock to the alleys, speak loudly in all languages, and taking pictures of their homes. So, if you visit, please be quiet and respectful this place while your visit.

Are you interested in learning more about unique Korean architecture? Click Here to read about Door Designs of Korean Buddhist Temples. This is an inside look at a rare book, documenting the designs of doors on temples before the modernization of Korea.

I am an architect who is studying Korean at Kyungbok University. Architecture and the city are like a book to me: each one has its own story that I want to read and explore. And I invite you to join this amazing journey!