Stories about Korean mythical creatures date back thousands of years. Many of the folktales I will share with you today have their roots in ancient religions. Korea’s mythical creatures share similarities with epic tales found in Shamanism, Hinduism, Buddhism, and Taoism. Are you ready to dive into Korea’s ancient oral traditions? let’s get started with the terrifying Dokkaebi!

The Most Popular Korean Mythical Creatures

The most famous Korean mythical creature of all is the dokkaebi. It is often translated as a goblin however, they are a bit different from what people from western countries might imagine.

Korean goblins differ from western ones in that they are far less dim witted and vicious. In fact, the traditional dokkaebi is often depicted as a local god-like creature. Historical reports say that they were worshipped and idolized by local communities. Others say they had a reputation for enchanting women. which, often resulted in demi-god children with supernatural abilities.

Unfortunately, the essence of the ddokaebi has been watered down and many young Koreans are unfamiliar with the traditional version of the creature. This is because Korean dramas often depict them incorrectly.

Historical dokkaebis are terrifying creatures to look at. They have a horn or two, fangs, brightly colored skin, and often only a single eye. Dokkaebis are extremely varied creatures when it comes to looks, but one thing is certain. They don’t look human, and they especially don’t look like the handsome actor Gong Yu. They are terrifying creatures, born from cursed objects stained with human blood.

The Most Vengeful Korean Mythical Creatures

The depiction of the Gwishin is similar to that of ghosts all over Asia. They are women dressed in a long white underdress with long black hair and a decaying face. These ghosts stick around until they complete unresolved issues or get revenge. Out of all the mythical creatures on our list, this is the one people claim to see the most in modern times. 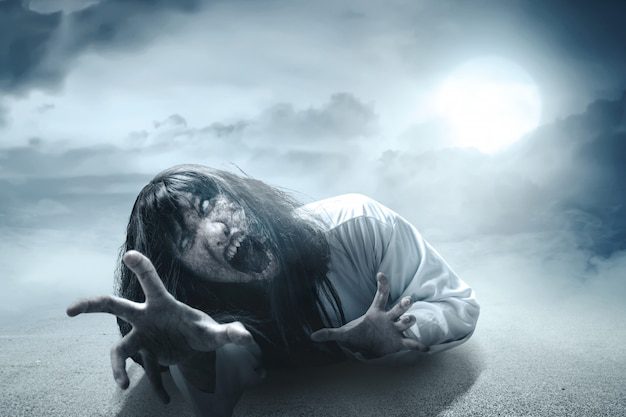 Two versions of the gwishin are popular in Korean folktales, virgin ghosts (cheonyeo) and water ghosts (mul gwishin) although many others exist.

People believe that cheonyeo are the cursed spirits of women who died before losing their virginity. Many now believe that tales of this type of gwishin were created to scare young women and girls into marriage.

Child marriage and early motherhood were historically an important part of life for Korean women.  Cheonyeo legends became highly popularized during Joseon as Korea adopted Confucianism, which placed huge importance on early marriage. Nowadays, marriage and having children isn’t so important in Korean society. In fact, it has one of the oldest average marriage ages and the lowest birthrate in the world. However, many people still believe in cheonyeo and claim to see them along countryside roads.

Next is mul gwishin. These are the ghosts of people who drowned alone and whose bodies were never recovered. Or, the spirits of those who were violently murdered and disposed of in large bodies of water.

The first type of mul gwishin, those who died alone, want a companion. They grab those who walk along the water’s edge, pull them in, and drown them.

The second type of mul gwishin normally wants either revenge, help, or both. They often drag people into the water who resemble their killers. But sometimes, they come to those in positions of power or with great physical strength to ask for help. Anyone who refuses their request suffers a mysterious death.

To read one mul gwishin’s tale of vengeance, Click Here!

The Most Majestic Korean Mythical Creatures

This mythological creature is so popular to this day, that it is often featured in Korean dramas and literature.

Legend has it that if a fox lives for one thousand years, it evolves into a nine-tailed creature that can shapeshift. Although, in folktales, some cursed children are born with the spirit of the fox. They often end up shapeshifting and brutally murdering their family.

Although the nin-tailed fox can become anything it wishes, its favorite form is that of a beautiful young woman. In order to maintain its immortality, the fox lures men with its beauty to eat their livers.

While the traditional monster is absolutely terrifying, modern portrayals have taken a much softer tone. Many modern Gumihos are male, misunderstood monsters who just want to become human.

The Most Human Korean Mythical Creatures

Jeoseung Saja is the Korean version of grim reapers. They escort souls to the afterlife. However, with reincarnation playing such a huge role in traditional Korean beliefs the scope of what a jeoseung saja does is a bit different than that of a western grim reaper.

Similar to the western version, the jeoseung saja represents death. The Korean version of this mythical creature resembles a human but is extraordinarily pale, tall, with sharp eyes, and black lips, and wears a black hat and black hanbok.

The Great King of the Underworld directs the creatures to fetch runaway souls and bring them back to the afterlife. Unlike western depictions, Korean grim reapers often display humanity and sympathy. In many folktales, they help souls resolve unfinished business, allow grace periods before capturing them, and even take bribes in exchange for extending souls’ lives.

Some of the most common stories of jeoseung saja involve tricking death. Once a jeoseung saja calls your name three times, you die and your soul is transported to the underworld. However, if one claims a false identity, the underworld may welcome the wrong soul.

The Most Adorable Korean Mythical Creatures

Firstly, there is a native dog breed in Korea with the same name. However, today we will be discussing the mythical creature the breed is named after.

The story of the Bul Gae, or fire dog is an ancient Korean fairytale used to explain solar and lunar eclipses, According to Korean Myths, fire dogs come from the kingdom of darkness. The King of the Land of Darkness sends the dogs to bring him the son and the moon.

The heat of the sun and the cold of the moon cause them to fail each time. However, the fire dogs never give up. Once in a while, they return, attempting to take the sun and the moon from our realm. When this happens, we find the sun and moon blocked from our view. And so, next time you see a lunar eclipse, just imagine a pack of fire puppies frolicking on the moon.

The Most Worshiped Korean Mythical Creatures 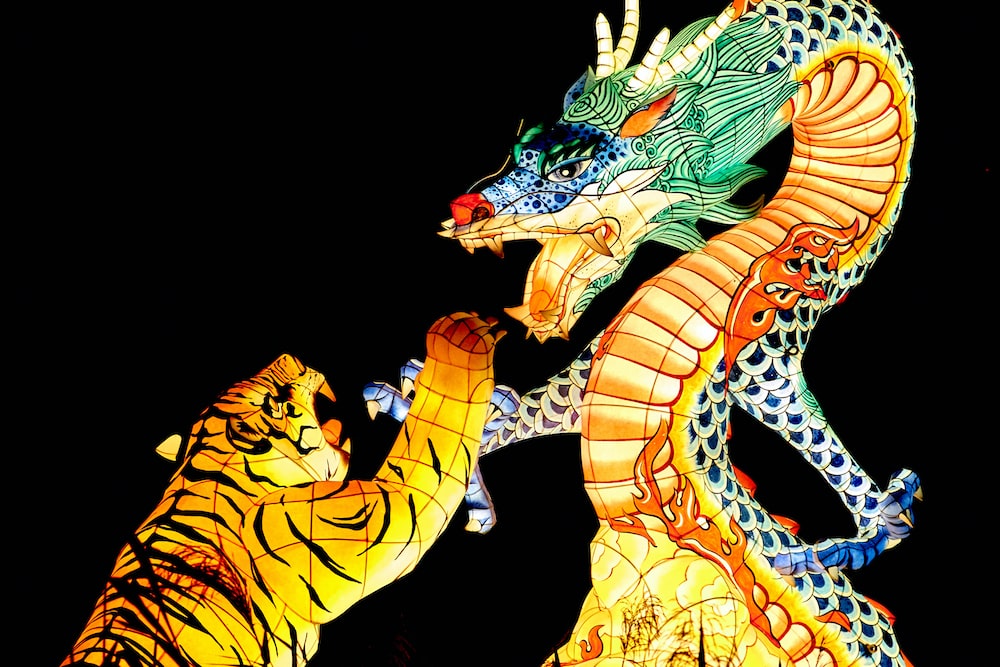 The Yond, Ryong, or Mireu is the Korean version of a dragon. The name of these Korean mythical creatures varies according to region and time period.

Unlike Chinese or western dragons, Korean dragons have a very specific appearance. Starting with their head; they have the horns of a deer, a camel’s hair, the eyes of a rabbit, a pig nose, a goat’s beard, and the ears of a cow. For its body; it has the neck and scales of a snake, tiger paws with falcon talons, and a carp’s tail.

Korean dragons also have nothing to do with fire, they are exclusively a water diety. I say diety because dragons are the spirit of large bodies of water. Historically, nearly every village in Korea had a dragon. Villages in Korea relied heavily on lakes, streams, and the ocean for sustenance. And so, a happy community dragon meant prosperity.

Undoubtedly, the dragon is the most beloved Korean mythical creature of all time. The royal families of Korea often drew on dragon myths to increase public support. Many kings have claimed to be the child of a dragon while taking the thrown. Furthermore, on the official Joseon dynasty kings’ robes, you can see a dragon depicted front and center.

The Most Royal Korean Mythical Creatures

Haechi legends originated in northern China. The Chinese Haechi exclusively eats mulberry leaves, which are said to be the food of the gods. It is a lion-like creature with a pig nose, scales, and a mane like a cloud. It has a single horn on its head it uses to impale evildoers. 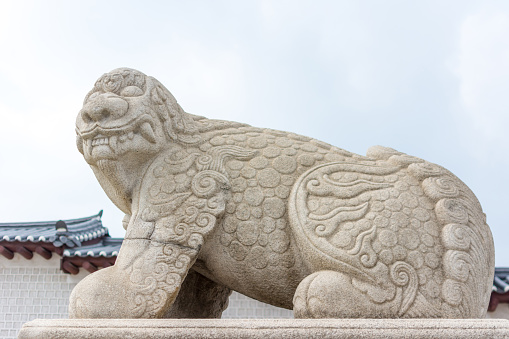 However, the Korean version of the mythical creatures have no horn. Legend has it that only the king can command the Haechi and so it has no reason to display the horn of justice unless the king commands it to do so.

Throughout Korean history, the Haechi was used as a mascot for armies and law enforcement. Even in modern times, the Haechi represents justice and the power of Korea itself. In fact, in 2008 a super adorable version of the Haechi became Seoul’s official mascot.

The Most Naughty Korean Mythical Creatures 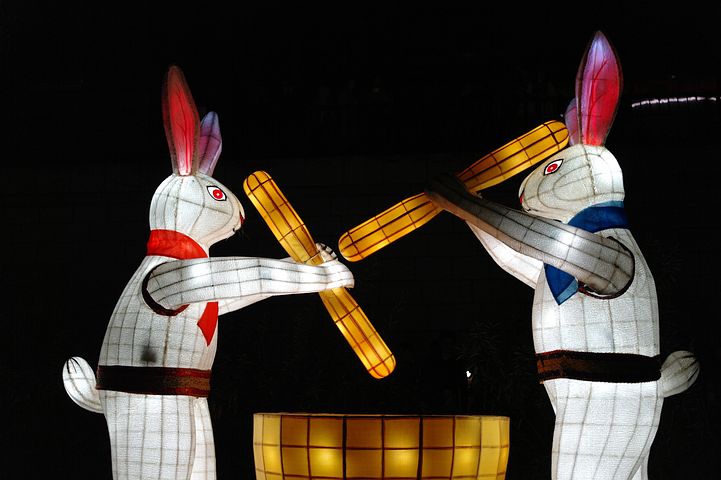 The last on our list of Korean mythical creatures is the dal ttoki. Throughout the world, cultures have taken note that the craters on the moon create shadows that look like a bunny. And so, Korea has its own folktales of mythological creatures resembling rabbits that live on the moon called dal tokki or moon bunnies.

Moon bunnies represent wealth, success, strength, and fertility. They were actually widely used as a symbol of the Korean people until the 1988 Olympics when Korea sought to take on a symbol of strength that could be more easily understood by the Western world. And so, the traditionally evil and bloodthirsty tiger replaced moon bunnies.

The most popular moon bunny folktale involves two bunnies meeting under the full harvest moon on Chuseok to pound some rice cake. If your mind is in the gutter, you are correct! The moon bunny folktale is a euphemism for intercourse. For hundreds of years, Koreans have been discreetly discussing the deed by referring to moon bunnies and rice cakes.

If you enjoyed this article and would like to know a little bit more about traditional Korean beliefs, Click Here to read an introduction to Korean Shamanism.