The legendary love story between King Jeongjo and Uibin Seong recently made its way onto our screens through the K-Drama Red Sleeve Cuff. Interestingly, the drama was an adaptation of a novel with the same title. However, the characters were real people who lived in the 18th century. The tragic love story between King Jeongjo and his concubine has captivated the hearts of Koreans for over 300 years.

In this article, I will retell the story presented in the drama and the real historical events of this tragic love story. For the historical sources, I relied on my knowledge and my friend’s re-telling. Her name is Lolita and she’s studying Korean heritage at university. She recently visited historic sites related to King Jeongjo where she gathered information related to his life and his love story.

The title refers to the court lady’s uniform, as Seong Deok-Im (the female lead, played by Lee Se-Young) was a court lady in the Crown Prince’s palace. She spent years of training as a court lady and was undyingly loyal to her ‘master.’ As the drama progressed, she grew closer and closer to Yi-San, the Crown Prince, until she became his Royal Concubine.

Meanwhile, Lee Junho played Yi-San/King Jeongjo, the ambitious Crown Prince and later King of Joseon, who developed an affection for Seong Deok-Im. At first, Seong Deok-Im rejected his love and advances several times, because she wanted to maintain her ‘independence’ and ‘freedom’ as a court lady. But a certain accident made him ‘force’ Seong Deok-Im to be his concubine to protect her from the palace’s politics and schemes.

The drama’s rating peaked at 17% viewership and reached an average of 11%, indicating its popularity among the audience. Even though it is not entirely historically accurate, it managed to capture the tragic love story pretty well. When I visited Lady Seong’s tomb with Lolita, the staff told us that there has been an increase in visitors to the site, thanks to the drama.

There were no records of how Seong Deok-Im met the Crown Prince in official documents. However, King Jeongjo himself retold their love story. The court maiden met King Jeongjo when she was still one of the staff at Lady Hyegyeong’s residence (the King’s mother). Her father also worked as a steward for the maternal grandfather of King Jeongjo.

When Lady Hyegyeong and the young Yi San (Jeongjo’s birth name) left the palace after the death of Prince Sado (Jeongjo’s father), they moved to Lady Hyegyeong’s maternal home. They brought along Queen Hyoui with whom Yi San married when he was 9 years old. I know, child marriage is horrible, but it was the tradition within the royal family of Joseon. However, they normally didn’t consummate their marriage until they were older.

Anyway, Yi San and Seong Deok-Im met and got closer during their tween years. Deok-Im even developed a close relationship with Queen Hyoui, which later became one of the reasons why Deok-Im rejected King Jeongjo at first.

The Proposal and Rejection

Yi San first proposed to Deok-Im when he was 15 years old. Deok-Im rejected him, reasoning that Queen Hyoui was still childless and it would create problems related to the queen’s standing if Deok-Im were to conceive a child first.

In Joseon’s era, rejecting a king’s or crown prince’s proposal or request could mean death. Plus, court ladies are the property of the king, Yi San’s grandfather. Yi San, was overstepping his rank. Both could have been punished, if not executed as a result of this proposal.

Yi San’s father, Prince Sado, knew his grandfather was not a merciful king. His grandfather had ended Prince Sado’s life in an extremely cruel way. The precursor? Prince Sado had his way with many of his father’s court ladies and murdered a few of them too. Yet, he braved proposing to Deok-Im. Moreover, Deok-Im who was only a court lady rejected Yi San. It was either Yi San’s benevolence (or love), or Deok-Im’s trust in him that perhaps emboldened Deok-Im to reject him.

The second proposal occurred 15 years later when they were 30. At that time, Yi San had already become the accomplished King Jeongjo and had two royal concubines: Lady Hong Wonbin and Lady Yoon Hwabin. In fact, King Jeongjo proposed to Seong Deok-Im for the second time in 1780, after Lady Yoon had entered the palace as a concubine.

Deok-Im rejected the King again. Her reason remained the same: Queen Hyoui was still childless and there were two younger concubines. Perhaps, for her, there was no reason for King Jeongjo to get involved with a ‘lowly’ court maid when there were two noble ladies who were young enough to bear him children. However, I don’t think King Jeongjo proposed to the same woman twice only for the possibility of an heir, the only plausible reason was love.

Nevertheless, Deok-Im finally accepted the King’s proposal not long after. There were no records or accounts (even in Lady Hyegyeong’s Memoir) of why and when she finally accepted him and became ‘special court lady’ under the title of Lady Seong.

The official records of Lady Seong only appeared after she gave birth to King Jeongjo’s first child, Crown Prince Munhyo in 1782. Nevertheless, there were unofficial records that she was pregnant two times before Munhyo, yet she had miscarriages.

During their blissful years, King Jeongjo visited her in Yeonhwadang (her residence) often. He even relocated the building near Seongjeongjeong, his office. Unfortunately, Yeonhwadang is no longer exists in the current Changdeok Palace.

We have to note that his previous concubines have the ‘bin’ ranks because they were from noble families and were chosen for the sole purpose of bearing a royal heir. Even if a court lady became a concubine, her rank would not raise to ‘bin.’ It implied that Royal Concubine Ui-bin Seong got her title because of King Jeongjo’s immense love for her.

The royal heir was a huge issue during Jeongjo’s reign. He still had no successor until he was in his 30s which was very unusual for his time. Despite having two concubines from political marriage, there were no records of Jeongjo’s children. One concubine passed away a year after she entered the palace, while Lady Hwabin only appeared in records for her fake pregnancy and her death. Meanwhile, Lady Seong got pregnant every year between 1780 and 1786. Perhaps he had been saving himself for her. In fact, she was 9-months pregnant when she passed away.

The birth of Munhyo in the imin year (1782) brought great joy, but the King suffered two terrible losses in pyongo (1786).

The Memoir of Lady Hyegyeong 1982

Crown Prince Munhyo passed away in May 1786 after contracting measles. Then, in September, Uibin Seong passed away (with a baby in her womb) as a result of an illness that modern doctors now suspect was cancer. King Jeongjo took care of her personally for the last few months of her life, including feeding her medicine himself.

He handwrote the inscription on Seong’s tombstone and continued to write love letters to her years after she had passed. He was the only King of Joseon who documented his personal love story and used the word ‘LOVE’ (sarang) in his letters.

After her death, Jeongjo seemed to lose his will to live. Moreover, he aged faster and his hair turned white at the end of his 30s.

The Tragedy of the Tombs

King Jeongjo continued to honor her by paying the utmost respect to Uibin Seong years after her death. He included her in the memorial service for his biological father (Prince Sado) and grandmother (Lady Yi Youngbin).

Defying court rules and Joseon tradition, he buried her 100 steps away from Prince Munhyo. A concubine (tomb rank: myo) was not allowed to be buried in the same place with a crown prince (who has the second-highest tomb rank: won). The complex holding their tombs became known as Hyochangmyo.

The king even put their spirit tables in the same shrine and placed the tablet near Changdeok Palace so he could visit both his son and Seong often. He visited them often and it is even documented that he spent a night at Seong’s tomb. The tomb was originally located in Hyochang Park, Seoul.

Unfortunately, this tragic love story just gets sader. The Japanese colonial government decided to move Prince Munhyo and Seong’s tombs. In a public display of disdain for Joseon, they even separated the mother and son. 3 kilometers away from each other, she now lies in her current location in Goyang city.

If you liked this story, you’re definitely going to want to read about the absolutely insane story of King Jeongjo’s father. What a family! Click Here to read the dreadful history of Suwon Hwaseong fortress.

From Hearts Coffee in Seoul 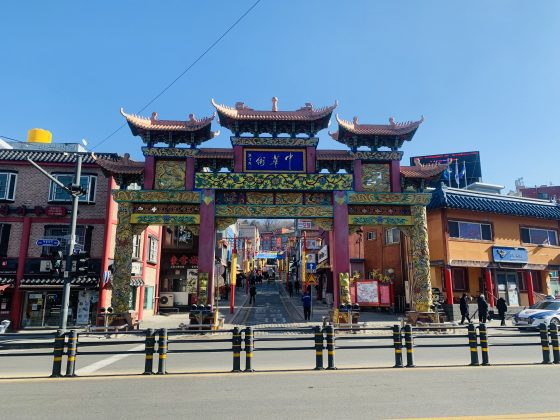