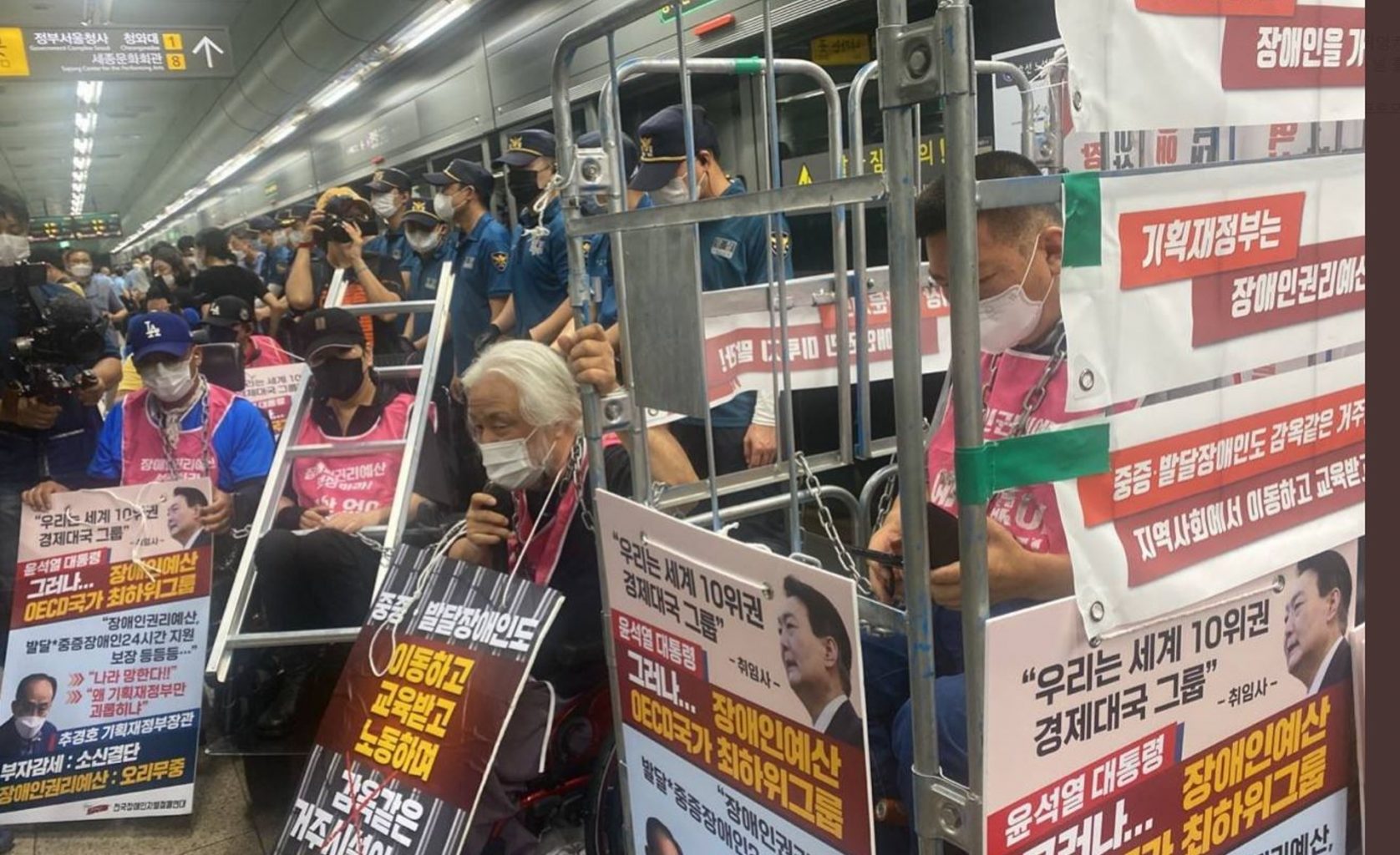 On Wednesday, October 19, 2022, Seoul’s subway stopped along lines 2 and 9 for over two hours during the morning rush hour. However, while this is probably the biggest disruption so far, it was definitely not the first. Disabled citizens of Seoul have been seeking accessibility to transportation and equal rights since the 1980s.

Table of Contents
Recent Protests
Who is Protesting and Why
So Why Disrupt My Commute?
Future Protests

On October 19, 2022, Seoul subway lines 2 and 9 came to a stop beginning at 8 AM. Protestors took over Seoul National University Station on line two, and Dangsan Station on line nine. It took around 2 hours to clear the protestors. And, as of writing this article at noon, the lines are still not fully operational. 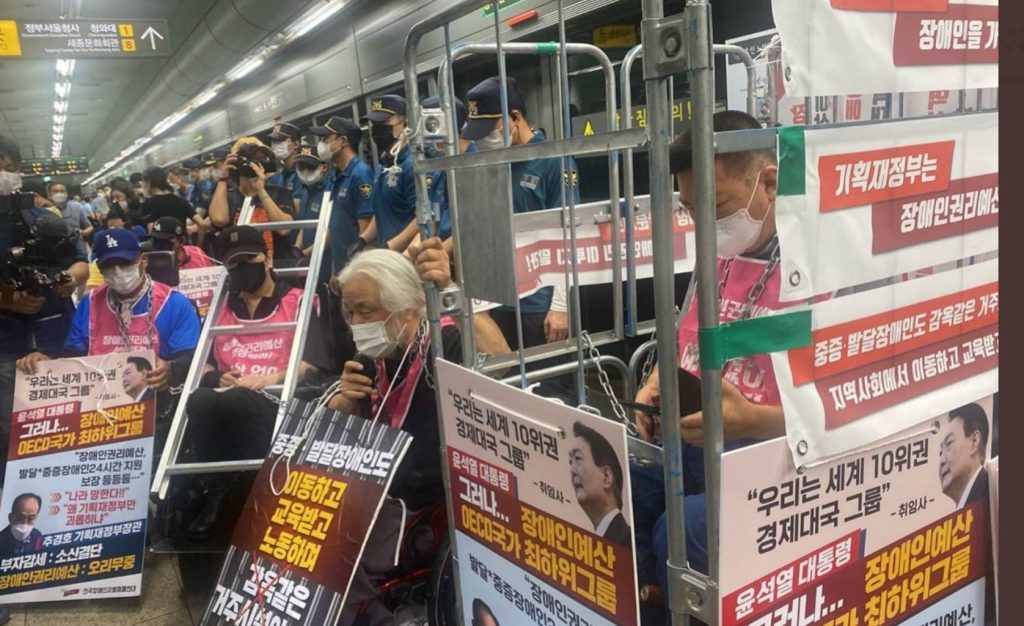 Our college was on line 2 when her train stopped at around 8:05 at Shindorim station. Although the train was stopped, people continued to enter the subway car making it impossible to leave the train. Finally, at around 9:30 she was able to leave the subway. However, she found that all of the buses that approached were overpacked with passengers and unable to open their doors. It wasn’t until 11 that she was finally able to catch a bus.

This is the first time that these stations have been a target of the protests. However, other stations are frequented by anti-discrimination protests.

I used to live on line 4 and pass by Dongdaemun station every day on my way to work. One of the main reasons I decided to move was the frequency of anti-discrimination protests against disabled citizens. I had to come to work over an hour early to avoid getting stuck in the subway several times a week.

The few times I left late, or they began early, it was a nightmare. Once, I was stuck in the subway between two stations for 45 minutes. There were so many people on the train, I couldn’t even move my hands to use my phone.

Who is Protesting and Why

Currently, in South Korea, there are no anti-discrimination laws. This includes discrimination based on gender, race, ethnicity, sexual orientation, or ableness.

In 2007, the activist group Solidarity Against Disability Discrimination (전국장애인차별철폐연대 or 장애인) was formed with the aim of enacting legislation that protected those with disabilities. The group has three main issues they have prioritized as the first steps.

Reform the Rating System for Welfare

First, is the national disability rating system (장애등급제). In order to qualify for disability assistance in Korea, the office of disability classifies and ranks individuals. There are 10 classifications of disabilities, that are then ranked by severity on a scale of 1-6. Individuals’ rankings determine their access to assistance. However, the group argues that this does not encompass all disabilities or account for the way disabilities progress over time. As a result, they would like the system to be reformed.

The second is a system that has roots in Confucianism that is similar to conservatorship in western countries (부양의 무제). Those with disabilities in Korea are placed under the guardianship of relatives. They are limited in making legal and medical decisions by themselves. This group would like to see the system abolished.

Lastly, is the disabled group home system (장애인 수용시설). In Korea, you may have noticed the absence of disabled people in public life. This is because most disabled people are housed in group homes. Most do not choose to be there, and many of the homes have been known to have substandard living conditions. The group would like to see the conditions of group homes improve, and for the disabled to have a choice in living there.

Overall, the group wants to make it possible for those with disabilities to lead as normal of a life as possible. They want to be integrated into society, rather than hidden away in rural group homes.

So Why Disrupt My Commute?

There are two main reasons why the anti-discrimination protests are disrupting your commute. One, able-bodied people rely on the subway to get to work, but it’s inaccessible for many people with disabilities which prevents them from leading a normal life. And two, it’s very visible. 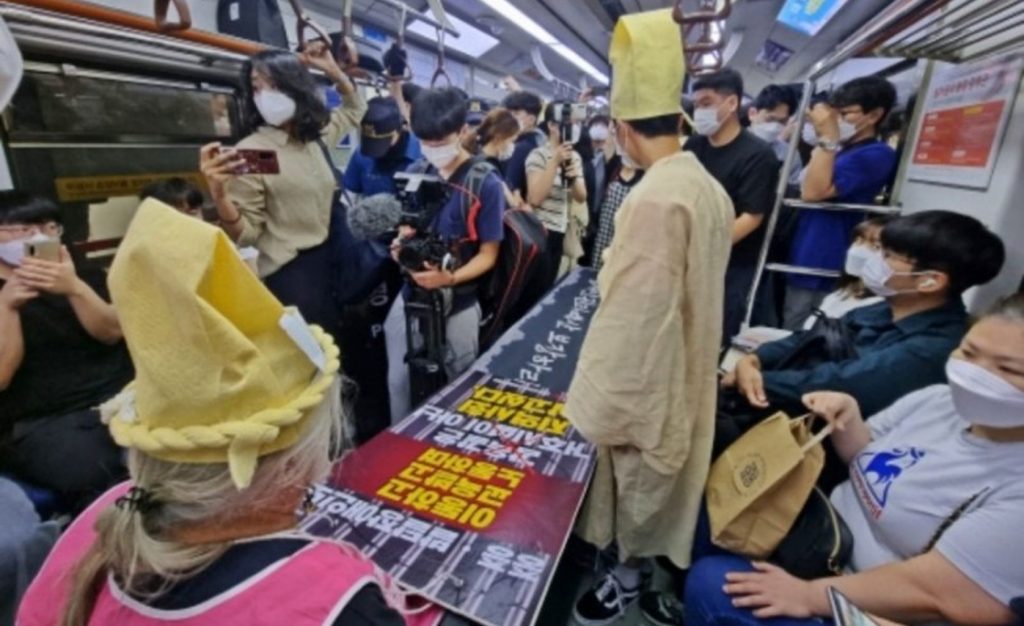 If you have ever traveled through the Seoul subway with a suitcase or heavy bag, you know how inaccessible it is. Now, imagine being in a wheelchair. There is a lack of elevators, the ramps are too steep, and the gap between the platform and the subway car is too wide. People in wheelchairs can’t rely on the subway system.

But, that is not all. This subway system which is considered to be one of the best in the world did not take people with disabilities into account at all. There is no braille on signs for the blind. There are no visual emergency sirens for the deaf. The list goes on.

Able-bodied people take the subway every day without a second thought. But, for the disabled, it is a symbol of how they are isolated from society.

Solidarity Against Disability Discrimination was formed in 2007. Since they were created, they have been petitioning the government, proposing laws, engaging the community, and appealing to international human rights groups. Nothing worked.

At least if the subway stopped, you might look up why you encountered an inconvenience during your morning commute.

Still, even after the subway has stopped due to the same protest 40 times, the Seoul government is not moving toward negotiations. And so, the chances that you will encounter more disruptions to your commute are quite high. Thankfully the group does give advance warnings of protests.

In particular, I recommend checking their Twitter for the next month or so if you were affected by today’s protest. Their handle is @sadd420.