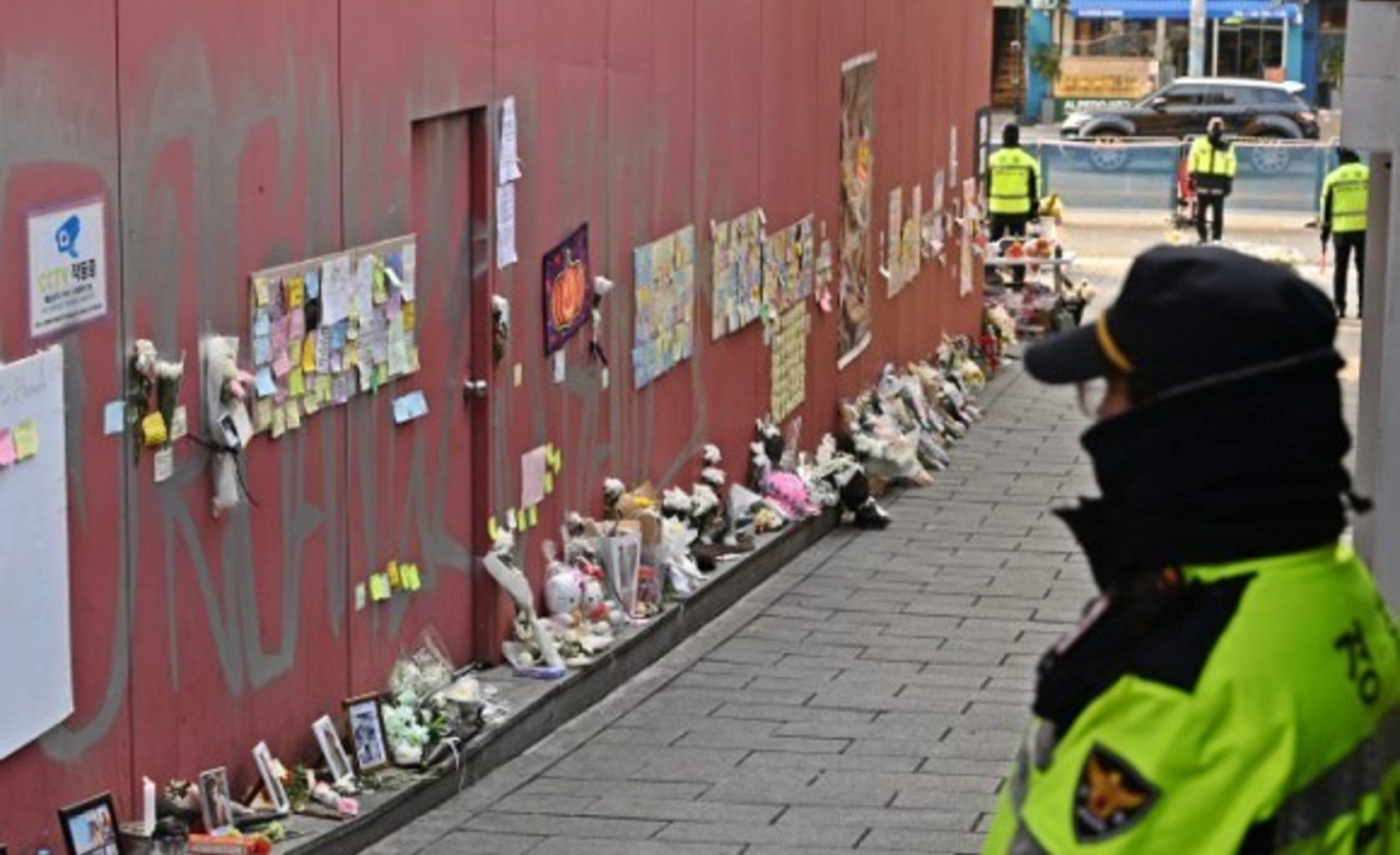 What Happened in Itaewon on Halloween Weekend?

It has been a month since the Itaewon tragedy occurred. This article was drafted immediately following the tragedy. However, out of respect for the mourning period, its publication was delayed. We understand that many within the KoreabyMe community were personally affected by this event, and some witnessed it unfolding firsthand. Please do not continue reading if you are still processing the disaster that occurred on the weekend before Halloween in Itaewon.

Table of Contents
Itaewon disaster
Who is at fault?
Was It a Stampede or a Crowd Crush?
My Biggest Condolences to the Victims and the Victim’s Families

On the night of 29th October, a disaster occurred in Itaewon. As of Monday, 153 of the 154 dead have been identified, including 26 foreign nationals (the number of deaths has increased to 158). The deceased include five Iranians, four Chinese, four Russians, two Americans, two Japanese, and one each from France, Australia, Norway, Austria, Vietnam, Thailand, Kazakhstan, Uzbekistan, and Sri Lanka. (Korea Times)

Who is at fault? 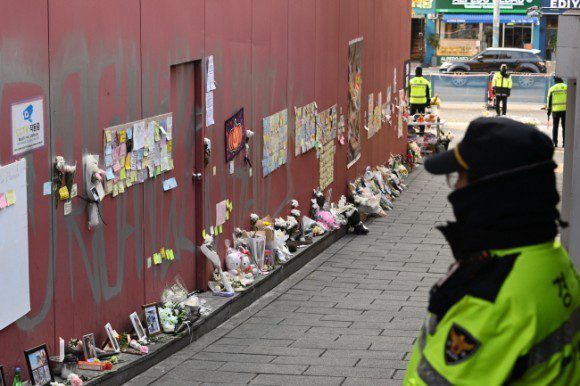 There are so many conspiracy theories about this topic and one of the most believable theory was that there was not enough police and a lack of crowd control from the authority’s side. On Monday 31st of October, Korea Times released an article with the headline “Role of administrative authorities questioned in Itaewon disaster”.

According to the articles, a crowd of nearly 100,000 people was expected to flock to the nightlife district Saturday to celebrate the first Halloween event without social distancing restrictions, including outdoor mask-wearing rules, in three years. Critics are asking questions about why and how the administrative authorities and police had failed to prepare in advance against crowd-related accidents.

According to the ward office, about 150 civil servants in 28 teams were deployed to Itaewon from Thursday to Saturday. However, there are people on Twitter who were questioning why the number of police went down from 800 police in 2020 to less than 200 in 2022. Knowing that the Halloween event in 2022 in Korea only has around 100 thousand people, less than 200 thousand people in 2017, a TikToker shared his concern regarding the problem.

Regarding the lack of police this year, one possible explanation is that the new president of Korea Yoon Seok-ryul moved his working office from the Blue House to Yongsan-gu. Therefore, a lot of police were redeployed to protect the president and the Yongsan police station was understaffed. One alarming side note is that the decision of moving his office was heavily influenced by the president’s advisor who is a shaman. This triggered the Tiktok communities after watching this video.

Since this article was first drafted other factors have also come to light. According to the Korea Times “The first calls from the public to the 112 emergency call center asking the police to control the crowd in Itaewon started coming in at 6:34 p.m., amounting eventually to 11 in total.”

“The first emergency call reporting that people were dying in the crowd crush was placed to 119 at 10:15 p.m. A full 86 minutes after that call, the first call was made via the inter-government agency communication network at 11:41 p.m.”

People at the scene reported that emergency responders arrived late to the scene. After they arrived, those in cardiac arrest were prioritized over those with a greater chance of survival. Additionally, there was miscommunication between first responders and local hospitals.

According to another Korea Times article, Doctors arrived at the scene at 11:41 PM but were unable to approach due to police blockades. Then, at 1:39 AM, the fire department attempted to transfer deceased patients to the hospital ahead of those in critical condition. After the hospital refused to admit deceased patients before those who were still alive, the fire department attempted to send them again only 16 minutes later. The following are translated messages between first responders and hospital staff: 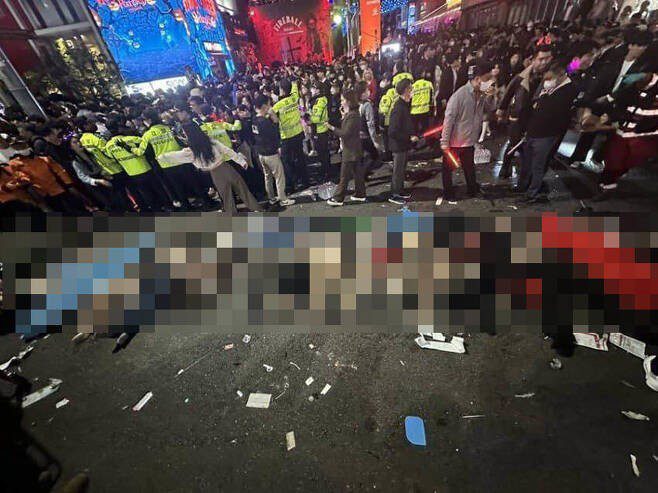 “We will transfer some 30 dead patients to Soon Chun Hyang University Hospital. Please check on the hospital’s capacity.”

“Don’t do that. Do not transfer the dead patients now. We are going to take some 40 patients who are still alive to the hospital first, including those who are critically injured.”

“Again, we are not doing that. Please send the patients who are alive to the hospitals first.”

Deaths Due to Delayed Treatment

According to initial reports and those who were present at the scene, 48 people we deceased when first responders arrived at the scene. The remaining 110 passed away while waiting to receive care or while in the hospital.

It is impossible to know how many could have been saved if rescue efforts had been more organized. However, according to the New York Times, “this was absolutely avoidable”. In previous years, the crowd was even denser than it was this year. However, unlike in past years, there were no officers directed to oversee crowd control.

Was It a Stampede or a Crowd Crush?

A very common expression that was used in every article regarding this disaster is that it was a “stampede”. However, it was not. There was no triggering event that resulted in panic. People did not fall only to be trampled by those fleeing the scene.

This was a crowd crush. A “crowd crush ” is a human disaster that often occurs in a small localized area such as a doorway, stairway, or alleyway. There doesn’t need to be an overwhelmingly large crowd for a crowd crush to occur. In fact, many past crowd crushes have occurred in areas where only a couple hundred to a few thousand people were present, far less than the crowds in Itaewon. Instead, what matters is the density of the crowd – the number of individuals compared to the space.

In crowd crushes, people are pressed up against each other in a confined space. They experience a combination of horizontal pushing and vertical stacking often against a closed exit or route of egress. As a result, their lungs do not have room to expand, and the cause of death is suffocation (asphyxiation).

For more information on the differences between a crowd crush and a stampede, Click Here.

My Biggest Condolences to the Victims and the Victim’s Families

It broke my heart to read the news on Sunday (30th October) morning. I had goosebumps and instantly feel scared. People’s lives can be taken so unexpectedly and easily. It broke my heart knowing that the victims are mostly in my age (20 plus) and also 2/3 of the deaths were among women. We went to the festival, happy, and excited, just to come back home with terror and trauma. It is every more painful knowing that this incident was totally avoidable if only the government had proper action like they did every year before.

In the end, I want to show you an article on how to protect yourself from a crowd crush. I hope that no more of those unfortunate incidents happen in the future. And I hope that this incident is an alarm for the mayor and the Korean authorities to put more preventive action to protect their innocent citizens in the future.