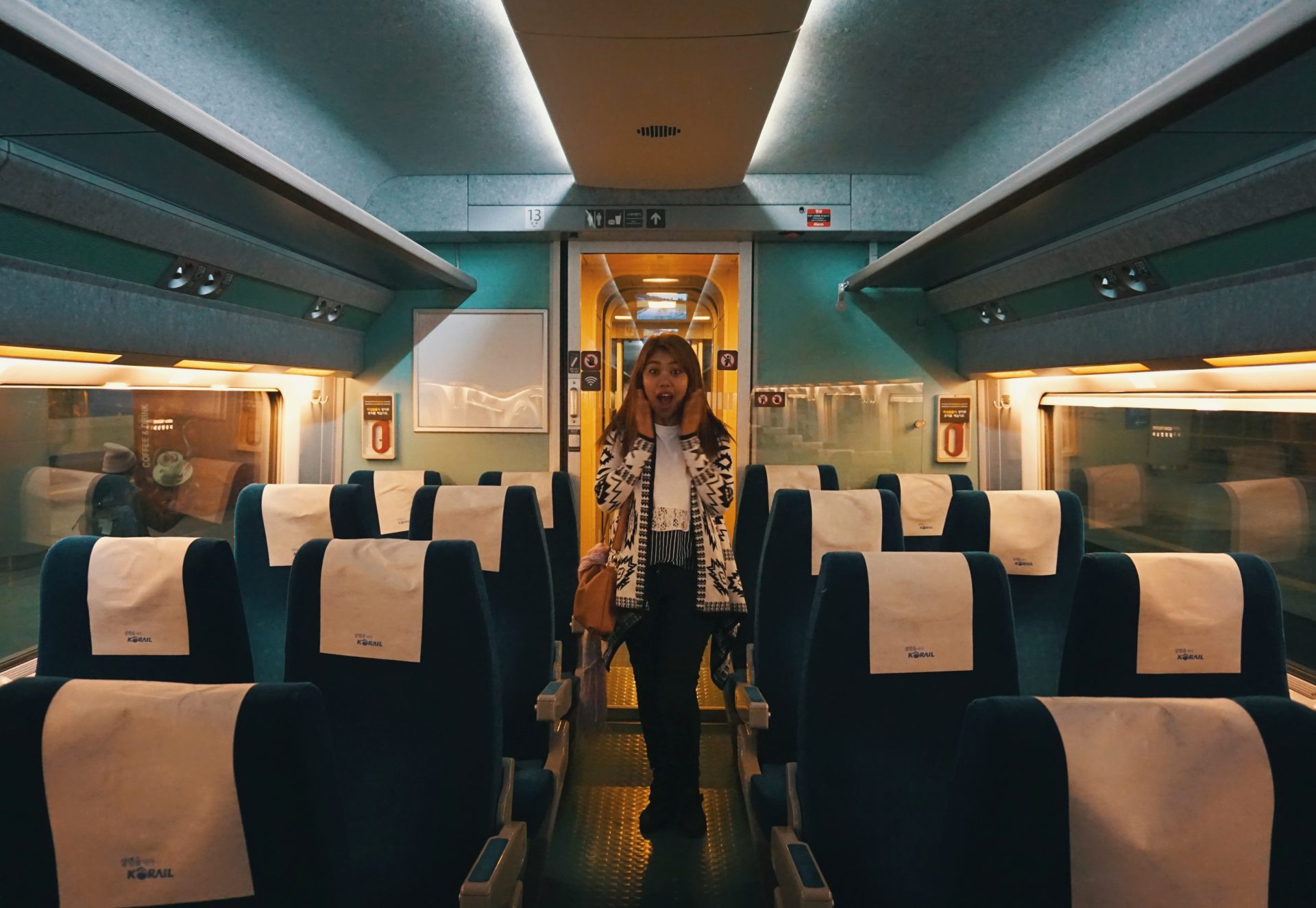 The good thing about traveling within Korea is that you will never run out of good places to visit, whether in big cities or in the countryside. South Korea consists of 9 provinces and 7 metropolitan cities and traveling within the country is that that difficult. Of course, if you have a car or if you can rent a car, that will make our travel more convenient. But visiting provinces and cities outside Seoul using public transportation is quite easy too. With thorough research, good navigation and patience, you can commute your way to beautiful places in Korea. So here are some ways on how you can do it:

Table of Contents
By Train
By Bus
By Plane

Riding a train is probably the most efficient and fastest way of going to your desired destination from anywhere in Korea, especially from Seoul and other big cities. There are enough number of trains that service thousands of people that travel using it.

The fastest is the bullet train, KTX (Korea Train Express). From its name, you can really be at ease that you will have an express travel to your destination. Though it is also the most expensive among all other trains. There are also regular trains like the ITX-Saemaeul and Mugunghwa. If KTX is the most expensive and fastest, the cheapest and the slowest is the Mugunghwa. It stops in a number of towns and villages, and operates over a number of lines that are not served by other trains. And lastly, are the KORAIL tourist trains which offer its passengers an amazing ride while seeing the beautiful nature of Korea. The two main railway lines are Gyeongbu Line and Honam Line but other railway lines also include Jeolla and Gyeongjeon Lines, which reach as far as Yeosu and Changwon on the southern coast.

If you are planning an extensive travel within the country by riding the trains, then you might want to purchase a voucher for a KR Pass that you can use for specific days with unlimited number of use. Travel Booking Apps like Klook offer a KR Pass on a discounted rate.

Also, what a better way to travel to Busan if not via Train to Busan? Here are some Busan itineraries that you can use in your travel there:

In addition to trains, yo ucan also commute using buses. Buses are great to use especially if want to visit smallest of towns and villages in Korea. Compare to trains, it is also less expensive so you can save some of your travel money. There are two types of bus system in Korea – the Express Bus and the Intercity Bus. Both express and intercity buses have extensive networks throughout the country and the buses operate on a timely schedule.

Express buses to the Gyeongnam area (Gyubu Line), Chungcheong area (Guma line), and Gangwon-do (Yeongdong Line) originate from the Seoul Express Bus Terminal. While the uses on the Honam Line that go to Jeolla-do to the south and the Namhaeseon (southern coastal line) start from the Central City Terminal. If you will go to north and east of Seoul, you can catch a bus from DongSeoul Bus Terminal. Then the Nambu Bus Terminal mostly provides ride to the southern region.

On the other hand, Intercity buses are usually located in the main cities of provinces in Korea and the make stopovers at smaller cities.

It is recommended to purchase your bus tickets in advance especially during holidays. You can do it though the apps: Express Bus T-Money and Intercity Bus T-Money. Note however that you have to be at the bus station on time so you will not miss your bus. Learn more about it here.

You can also try visiting provinces and cities outside Seoul by riding a plane. Well, techinically, planes are operated by private airline companies but the Korean government usually has a share in airpot operations. The majority of domestic flights are serviced from Gimpo Airport. This airport is easily reachable by Seoul subway and from Incheon Airport via the high-speed AREX train. Other international airports include Gimhae in Busan, Jeju International Airport, Daegu, Gwangju, Cheongju, and Yangyang in Gangwon-do. Domestic airports include those in Yeosu, Sacheon, Ulsan, Pohang, Gunan, and Wonju. You also do not have to worry about the cost of the plane ticket as it is not that expensive. For example, you can book a round-trip flight from Gimpo to Jeju for as low as 40,000 KRW. Who knows you may also end up seeing Kpop idols for free!

Here are other readings that may help you in managing your finances while you are in Korea:

Smart Ways to Find Cheap Yet Good Acc...
Theme Parks in Korea That Kdrama Fans...
Coat Thrifting in Seoul at Market in ...
Filing tax in Korea for foreigners
MBTI Craze in Korea
How to Register Marriage Between Fore...
Hiking in Korea: How to have the Best...
Guide to Utility Bills in Korea
Total
854
Shares
Share 854
Tweet 0