After seeing numerous ads pop up on Instagram for the newly launched cafe, SikMulSung. I finally paid a visit after finding myself in the Apgujeong area. The name, of the cafe, which translates directly to ‘plant-matter’, is a nod to their vegan beliefs and sustainable practices. Besides having such commendable principles, the cafe itself seemed very futuristic from the pictures. The place was decked out in shades of green and shiny chrome and featured a long conveyor belt. It ran through the bar table taking up one side of the cafe. Everything about the place intrigued me so much I could not wait to finally visit.

These two drinks aren’t the only unique things on the menu. Other offerings of note include the Reversed Salad and lettuce bouquets. Reportedly, made from salad leaves they grow themselves in-store, which can be proudly seen on display all around the seating area.

They also serve Basil Pine and Peach Rose Sorbets. Both are flavors that you’d be hard-pressed to find outside of this particular cafe.

They also have a selection of curious-sounding non-caffeinated drinks, like the Basil Lemonade and Basil Limeade. Then, they also have standard cafe fares like leaf teas and small baked goods like cookies and madeleines.

I decided to order the SikMulSung Black, which was surprisingly creamy for a soymilk-based latte. The chocolate flavor in it leaned a little to the bitter side, which complemented the coffee more nicely than if it was just sweet. I was surprised at how much I liked this drink.

The seating was quite haphazard – see-through tables pushed close together with clear barriers between them for added pandemic safety. Small booths tucked into corners with awkward side tables sticking out of the wall. And then the star of the space – the lengthy bar table constructed in a graceful curve. It had a conveyor belt in between the bar table and the salad leaves growing on display.

I also happened to stumble across a full-length mirror on the way to the bathroom. In a room that was dark and tinted completely green due to the only light source being a green fluorescent light. It appeared to be a very unique photo zone or powder room.

Did SikMulSung appear less put-together in real life than in the images I’d seen on their Instagram ads? Yes – but it was done with so much personality that I could not help but see a certain charm to the place. For those who prefer to be surrounded by the odd and extraordinary, perhaps SikMulSung would be your cafe of choice. 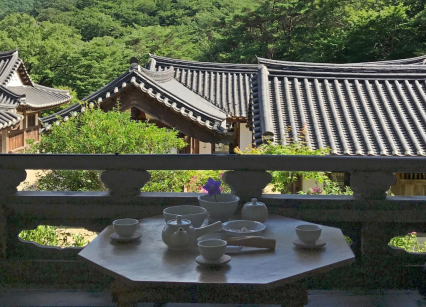 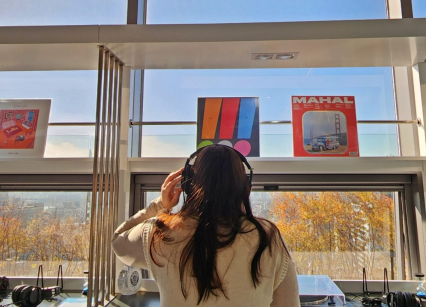