Gyeongju was the capital of the ancient kingdom of Silla. This city is full of historical sites, that designated as World Heritage Sites by UNESCO and the destination often called the ‘museum without walls’, that’s why Gyeongju is popular tourist destination. This place will give a great opportunity to explore Korean history and culture. So I strongly recommend to visit Gyeongju once and see incredible historical sites, such as royal tombs, Buddhist temples, pagodas, reliefs and hanok villages. I think two days’ Gyeongju trip is perfect to explore the incredible city. Let’s go!!!

The good start of trip will be from visiting one of the main highlights of Gyeongju is Bulguksa Temple (불국사), that has about 1,400 year of history.

The temple is a masterpiece of the Buddhist architecture, that was built after Buddhism was officially accepted by the Silla Dynasty. There are two stone pagodas on Bulguksa, Dabotap (다보탑) and Seokgatap (석가탑) are the twentieth and twenty-first Korean National Treasures. In summary, Bulguksa holds seven treasures. The twenty-second national treasure is Yeonhwagyo (연화교) and Chilbogyo (칠보교) bridge. The bridge leads to Anyangmun (안양문: Peace Enhancing Gate). The twenty-third treasure is Cheongungyo (청운교) and Baegungyo (백운교) bridges, that leads to the temple. Another treasures are gilt-bronze seated Vairocana Buddha statue  (No.26), gilt-bronze seated Amitabha Buddha statue (No.27) and the last is Sarira pagoda (No.61), which was taken to Japan in 1906, but was returned in 1933. In 1995, Bulguksa was added to the list of World Cultural Heritage sites by UNESCO.

Seokguram Grotto (석굴암) is a part of the Bulguksa temple complex, also was added to the UNESCO World Heritage List in 1995.

Seokguram is the twenty-fourth Korean National Treasure. The main Buddha of the grotto is a masterpiece of East Asian Buddhist art. The Buddha is realistic in form and probably represents the Seokgamoni Buddha. Seated on a lotus throne with legs crossed and looking out to sea, the Buddha has a serene expression of meditation. Must see of Buddhist architecture in Seokguram Grotto is large statues of the Four Heavenly Kings. The Four Heavenly Kings guard the corridor.

Gyeongju National Museum is a big museum where display lots of historical and cultural artifacts. At the museum you can check out five exhibitions. 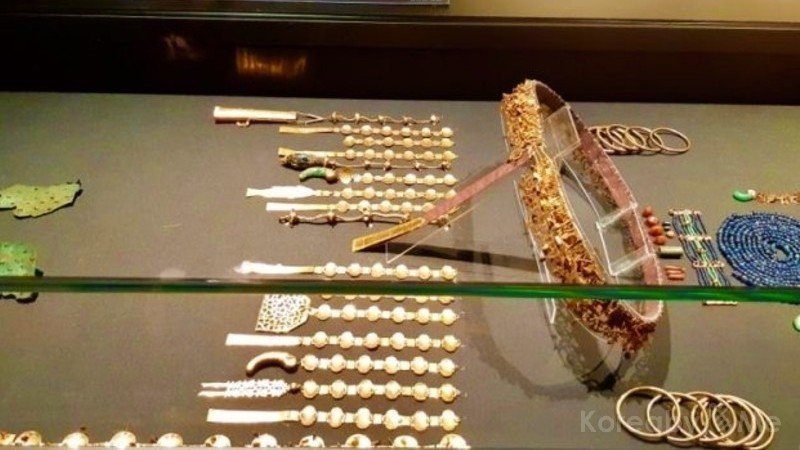 Another must visit place in Gyeongju is Donggung Palace and Wolji Pond (formerly known as Anapji), located in Gyeongju National Park.

According to the Samguk Sagi, it was constructed by order of King Munmu in 674 CE. Donggung was the royal palace where the princes of the Silla Kingdom lived. After the fall of Silla, the pond was abandoned and fell into disrepair for many centuries, but was rebuilt in 1974. Almost 33,000 pieces of historic relics were discovered there and now some of them are on display at the Anapji Exhibition Hall in the Gyeongju National Museum.

I recommend to watch the view of sunset there and after enjoy as the palace lights up. Be sure to prepare your camera or phone for amazing shots of the Donggung Palace and Wolji Pond ^^.

Day 2 of trip to Gyeongju will include some of the other interesting and incredible sites. In the next post I will tell about royal tombs, Cheomseongdae Observatory and amazing Gyeongju Yangnam Jusangjeolli Cliffs.

Don’t forget to comment if you have any more recommendations or tips related to this part of Gyeongju trip. Thanks for reading!