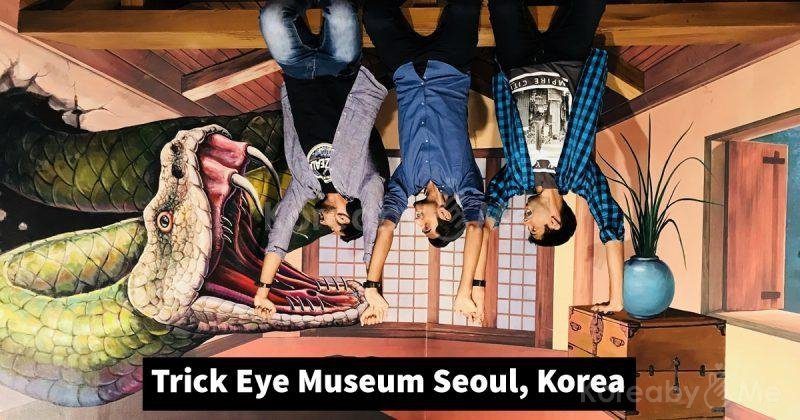 Trick Eye Museum – Must Thing to Do in Seoul

South Korea is famous for its all kinds of new and advanced technologies which can be seen all over the city of Seoul. From the world’s tallest skyscrappers to the street foods, this city has so much to offer for every kind of travellers and that too all around the year. If you are into museums, Seoul has some of the biggest museums in the Asia like National Museum of Korea, War Memorial of Korea.

But the museum that we are going to talk about today is so unique that it has become a hot spot for many foreigners coming to Seoul. Yes, we are talking about Trick Eye Museum – which one of the top museums in the world.

So the story behind the Trick Eye Museum of Seoul, South Korea isn’t that special. It opted out to be just like the rest of the museums in the world. In 2010, Seoul’s Trick Eye Museum had its first foundation. The same franchise opened in Singapore and Hong Kong too.

So the Trick Eye Museum in Seoul contains 65 artworks out of which 10 are present before the paid entrance and the rest of them, afterwards.

From those insides, 40 of them are of AR effect whereas 15 are artworks. Some of the artworks are either installed or are walled.  There’s also an entertainment zone inside the Trick Eye Museum in Seoul. It’s the VR Entertainment Zone. (The virtual reality). Not just this, but a Love Museum and an Ice Museum is also present in the same building giving people some more time to stay there and have fun.

Back in 2015, this was awarded as First in the attractions most loved by tourists and locals. Which was in the category of museums, of course.

To use this AR the new application Trickeye app has been used.

What to do in Trick Eye Museum

One of the coolest things while you have to take pictures or make videos is the coming into reality of these paintings where you can touch them and feel them on your own unlike other museums where you’re not allowed to touch.

The Ice Museum present inside the same museum basically has everything made out of ice. Kitchen, T.V, and ice slope etc. You just have to pay a little extra to see that as well. But it’s always worth it!

Outside the museum there’s a unique cafe that makes coffee art from taking your picture (any pic you want) and turning it into coffee art.

*For more information, you can call:

They can help you in different languages including English, Korean, Japanese and Chinese.*

Trick Eye Museum opens at sharp 9 a.m and doesn’t close until 21:00 pm. The entries stop one hour before closing, otherwise you’re free to enter anytime of the day.

It’s open all year round, never closes even on annual holidays or weekends. So you’ve got plenty of options being a magnet towards this museum for you to go visit it and experience the AR technology yourself.

Hope you loved this virtual tour to the place and get intrigued to visit it in real too.