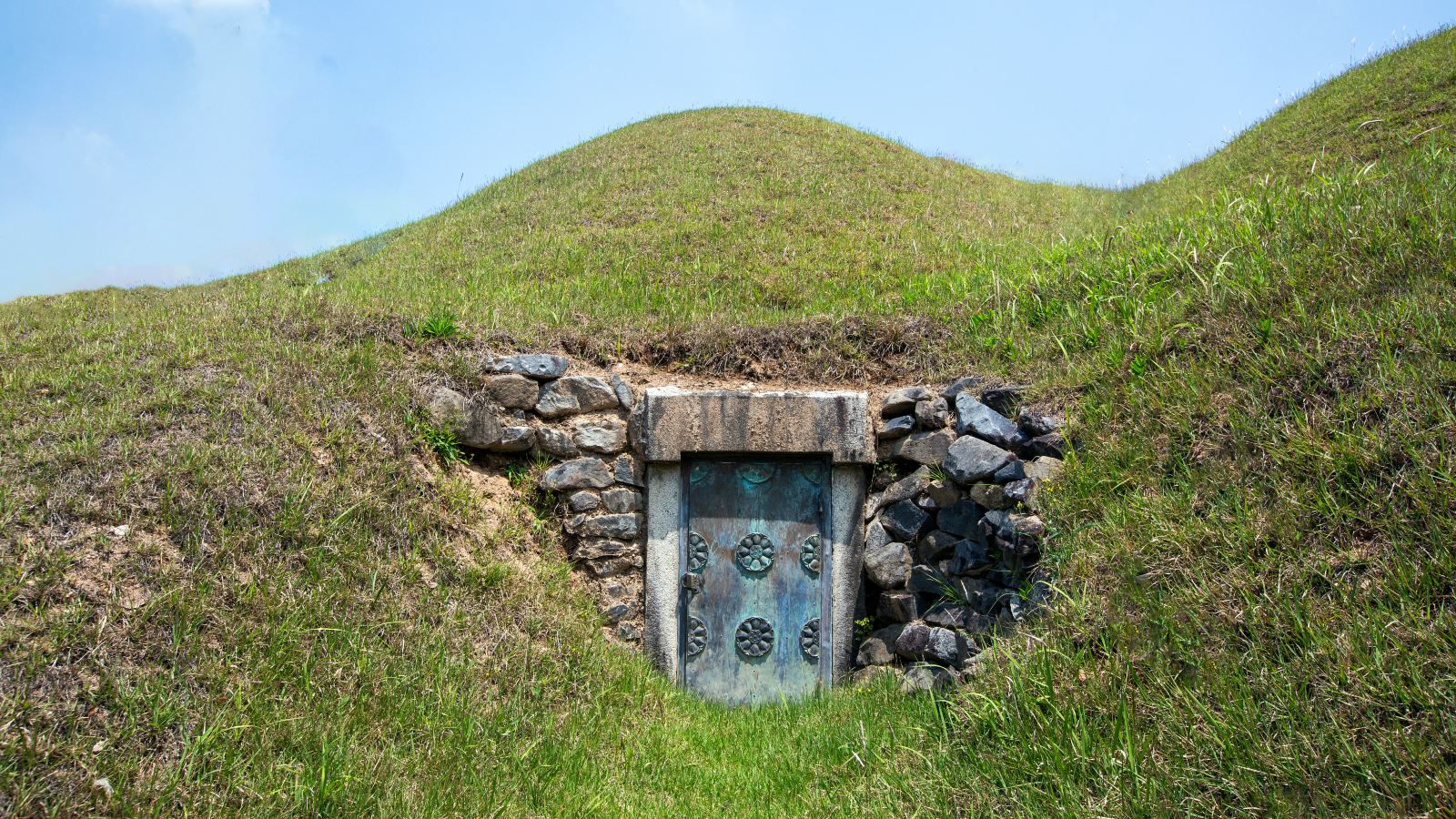 Traditional Korean funeral practice has its own unique features and history. In part 1, we discussed the theory, religion, and philosophy of Korean peninsula. However, today I want to tell you more about burial mounds themselves, their history, and their typology. 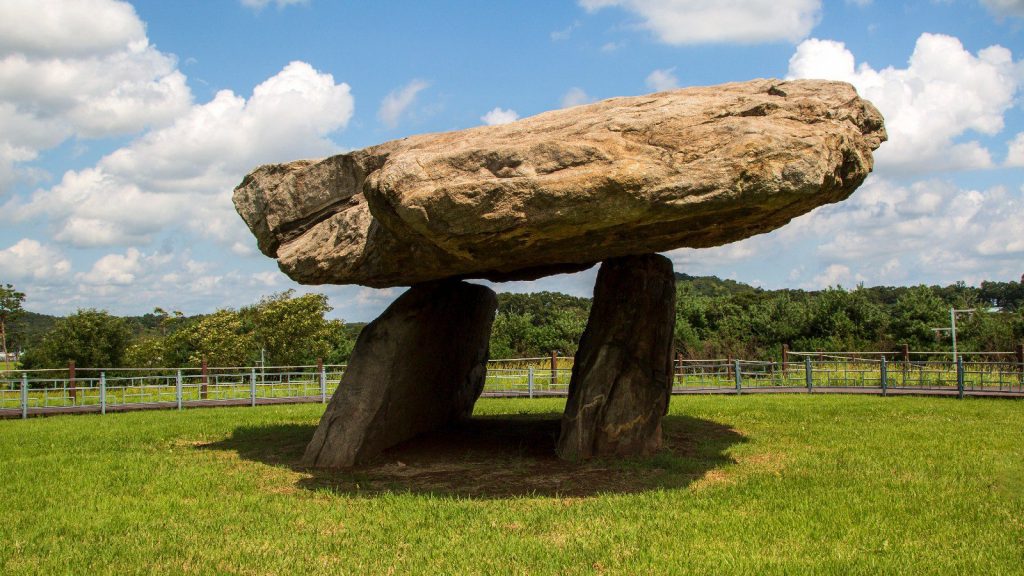 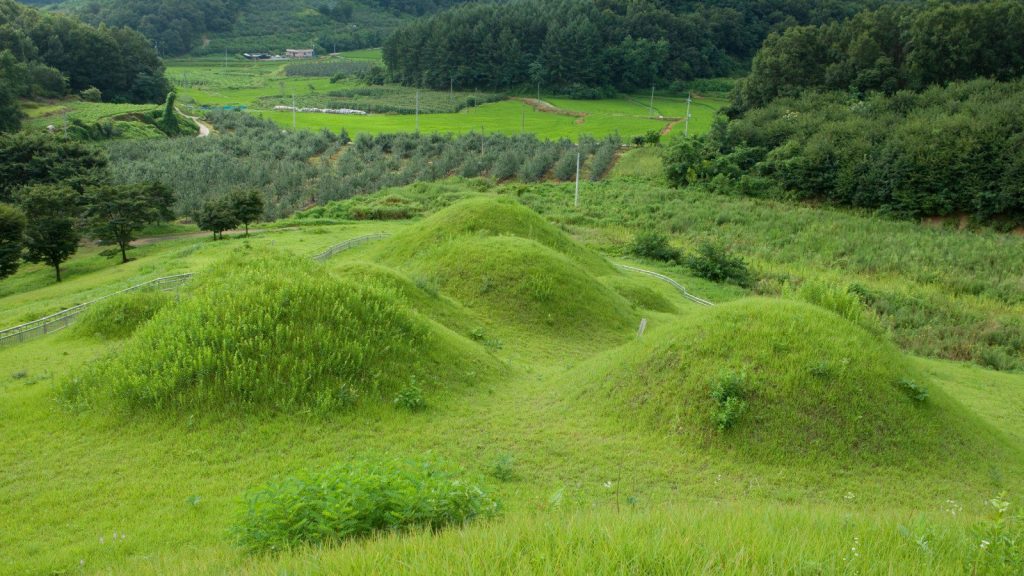 During the period of the Three Kingdoms (1st century BC – 7th century AD), it was replaced by a new system of burial mounds. After that, not only rulers but also ordinary noble people began to be buried in mounds. But the burials of nobles were built in a more simplified way. The development of the kurgan burial culture continued for more than two millennia.

Until now, a large number of burials from the state of Goguryeo near Tungou (modern Pyongyang) have been preserved, which, according to the research of Korean scientists, are divided into two types of structures:

Among the surface burials of the sokchungpun type, 40 tombs can be distinguished along with the remains of three cities of Ancient Goguryeo (277 BC – 668 AD). They are in Huanren County, Liaoning Province, and Jian, Jilin Province – all of them are located in modern-day China.

Wandu Mountain City, one of the capitals of the Goguryeo Kingdom, contains many ruins, including the Grand Palace and 37 tombs. The 12 imperial tombs located there have a stepped pyramidal shape built of stone.

Inside, the burial chambers were covered with clay tiles when archeologists unearthed them. In addition, the tombs of the nobility have stone chambers covered with mounds of earth and wall walls decorated with paintings. These paintings show scenes of everyday life, including sports, hunting, and nature, along with mythological images such as gods, fairies, and dragons.

Among the finds at this site is the Stele of King Haotaiwan, dated 414 BC. e. It tells about the founding of the kingdom of Goguryeo. Tomb paintings are a rare artistic expression in medieval Northeast Asia and together – the stele and inscriptions – show the influence of Chinese culture on Goguryeo.

The high position, isolation, and large area of the mausoleum are the characteristics of the imperial tombs of Goguryeo.

The underground tombs of the ponthobun type can be distinguished as another complex of Goguryeo dating back to the middle period of the kingdom. 80 tombs of this type have been located in North Korea.

The complex of tombs found there includes several groups and individual tombs which are located mainly at the foot of the mountains and some in the villages. Located in Pyongyang and surrounding provinces, these tombs are believed to have been made for the burial of kings, members of the royal family, and the aristocracy.

There are several types of tombs based on the number of burial chambers: single-chamber, two-chamber, and multi-chamber with side chambers.

The most significant are the Three Tombs (Sammyo), located in Goseong-gun. The main one is the Great Tomb (Temyo). According to historical chronicles, it is considered the burial place of the ruler Yangwon-wang (ruled 545-559) although archeologists have yet to prove the claim. What is known is that it was built in 565 and was previously called Daewangcheon.

At the entrance to the burial from the outside, there are two polished stone slabs whose side surfaces are decorated with ornaments. On the north side of the tomb, opposite to the entrance, there is a well-preserved image of the guardian of the North – a turtle wrapped in earth.

The entire composition was inherited from earlier sashindo compositions that decorated burials in Tungou and China, where they were preserved on stone pylons standing near the graves of the 1st-2nd centuries.

Burials in the southern part of the Korean peninsula from the same period differ significantly from the north. At the time, the peninsula was not united. So, while the Goguryeo kingdom dominated the north, reaching parts of Russia and China, the south was divided. There was Baekjae, Silla, and Gaya.

Burials of the Baekje kingdom do not have a pyramidal mound. For example, we have the grave mounds of Songsan-ri and the tomb of King Muryeong (462-523 years of reign) of the Baekje period.

The mound-style burial of King Muryeong is found only in the Gyeongju area. While Chinese-dominates customs placed the tombs in the north, this tomb was located in the south. However, the king was placed in the eastern part of the tomb and the queen in the western part, which is in line with Chinese practices.

Burials of the 7th century, which arose in Korea under the influence of Chinese complexes with alleys of spirits, are decorated with figures of warriors, officials, and animals, personifying the guard of honor near the grave. The earliest monument of this kind is a memorial structure in the form of a turtle on the grave of the first ruler of the Unified Silla, Kim Chunchhu (Taejon-Mureul-wang).

Near the tomb of an unknown ruler of Silla, presumably Munmu-wang (661-681) near Gyeongju, were erected four granite statues of military and dignitaries.

In terms of time and manner of execution (2nd half of the 7th century) these statues are close to the figures of the burial of the commander Kim Yusin (595-673). It is located on the western outskirts of Gyeongju.

Later in the 7th century in connection with the spread of Buddhism the burial structures changed dramatically. The bodies of the deceased are cremated and the remains are preserved in urns. Thus, the regular tradition of burial mounds faded into history.

The traditional elements of the complex begin to take shape by the beginning of the 10th century of the Goryeo Kingdom which we will talk about next time.

I am an architect who is studying Korean at Kyungbok University. Architecture and the city are like a book to me: each one has its own story that I want to read and explore. And I invite you to join this amazing journey!