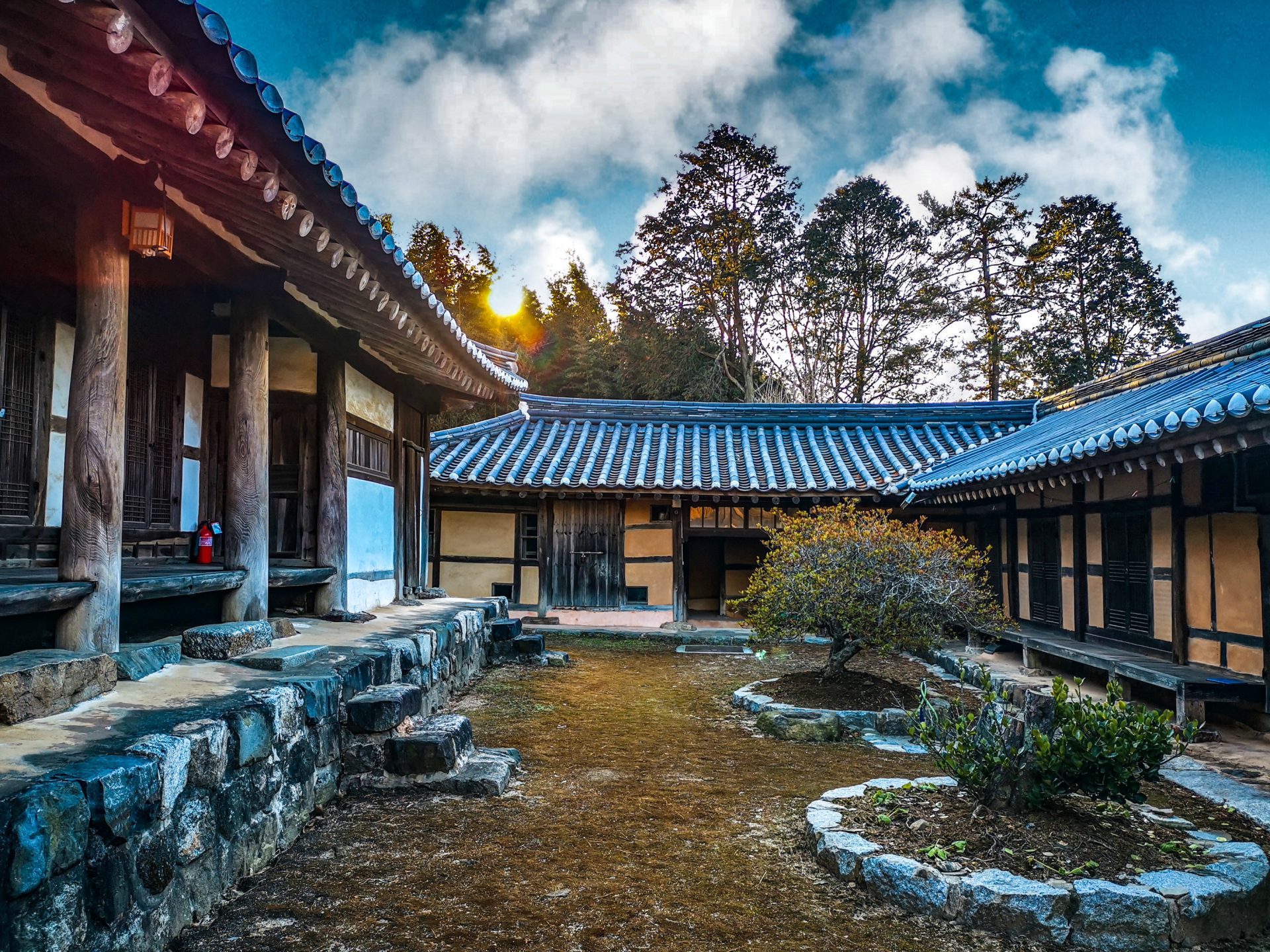 The Residence of Chae Won-Byeong in Gunsan

The residence of Chae Won-Byeong (채원병) has become a major attraction in Gunsan. As it gives us a glimpse of how upper-class hanok houses used to look like in the past. Since the owner, was part of a wealthy family.

Although it is located pretty far from the city, it is worth coming. As you get to see some of the most beautiful and traditional structures. Not for nothing it was designated as the Jeollabuk-do Folklore Cultural Heritage No. 24. On September 8, 1986.

Now, let us introduce this place thoroughly to you!

The location of this place is in a centipede-shaped site on Gobong Mountain. Due to this, it holds importance. Plus the house is facing the north. In accordance to the feng shui style.

Needless to say, it is harmonized with a breathtaking landscape. That once you see it, you will get to wish that you were living there, for sure.

In the past, the size of this house was very large. To match the owner’s wealth. However, many former buildings have disappeared. And now, you can only find a women’s quarters, a men’s quarters and a shrine. Despite that, the residence of Chae Won-byeong in Gunsan is still the best representation of rich people’s houses during the old times.

Now, let us take a deep look to it!

Numaru (누마루) is a wooden floor made like a pavilion. That is located on the edge of a men’s quarters. From the upper-class hanok houses (한옥).

The front and west sides of this numaru, have a three-year-old divisional gate, which is open. While on the east side, only a simple flat railing is installed. Without decorations. But allowing the visitors to see the courtyard in all seasons.

And in front of the east side, there is a senior stone (壽石). Which has a curved old pine tree next to it. So as a beautiful garden. That shows that this construction was thoroughly planned.

The view from this place, it is beautiful for sure. As it is located on the countryside. However, it used to look even better in the past. Since now, the new national highway blocks the view to the mountain. Due to its height.

The construction date of this site is unclear. But people think that it was built later than the main quarters. Despite that, it is the biggest structure of what it remains there. As it has 14 bays on the front space and 6 bays on the side space. Plus an entrance door at the center.

It consists of a room, kitchen, wooden floor and a numaru. And it is divided in to left and right around the Jungmun gate that is in front.

We can say, that this place has the best view of the garden.

The women’s quarters was constructed in 1860. And it consists of two kitchens from the west, two main rooms, two main halls, one crossing room, and a narrow space that faces to the outside. While only a wooden floor is placed on the rear.

It is said that this place had an attic in all rooms. Which was related to the family’s wealth. As it might have been necessary for them to have enough places to stock up with goods.

Despite being this old, it still is in a good shape. Actually, when I went, there were some construction workers. Which I assume that were renovating it.

Needless to say, it is a great spot to take a picture. Due to its traditional look.

There is a shrine in the south of women’s quarter. On a hill. Which is surrounded by a forest. And it has the typical shrine structure with three bays in the front space. So as two bays in the side space.

It appears to have been built in 1901. And now remains as one of the most beautiful constructions here.

A curious fact of this place, is that there is no air circulation. As the highway blocks it. Which means that this shrine is always moist and humid. But fortunately, the current landlord takes care of it. In order to prevent its deterioration.

It is for sure difficult to find this place without a map. But in case you are unable to use it, we have some rough instructions. First, you need to cross the street. Then, you must turn to your left on the first corner. From there, you just need to follow that path straight. When you are about to arrive, you will see some signs that will show you where to continue walking.

But take in mind that it is a 13 minute walk. If you are taking longer, it might mean that you took the wrong way!

The Residence of Chae Won-Byeong is a place you need to visit in Gunsan, of course. Since it is the perfect representation of how the rich people’s houses were like. In addition, it has a beautiful landscape. Because of its location. Which is on the countryside. Specifically, in Gobong mountain.

In case you had already gone, what it is your opinion? Let us know in the comments!