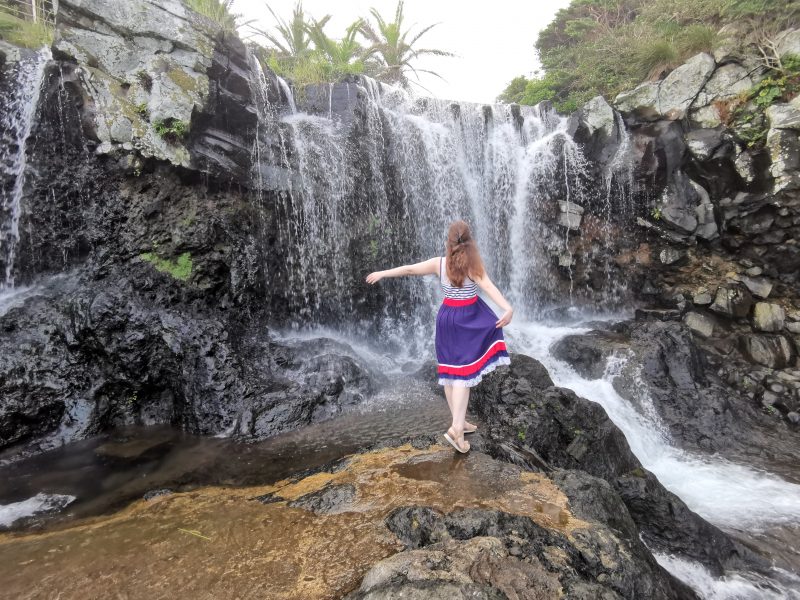 The Magnificent Waterfalls of Jeju island

Jeju island is the largest island of Korea located in South sea. Formed as a volcanic island with numerous volcanic cones, Jeju island has a unique nature for which it long has been regarded as the “Hawaii” of Korea. Its main and highest mountain is Halla mountain (or Hallasan / 한라산). With a peak of almost 2,000 meters amplitude, Hallasan is not only the highest mountain on the island, but also in Korea. Another name of the mountain is “Yeongjusan” (영주산) which means “mountain high enough to pull the galaxy”. Hallasan is also water-rich mountain, of which depths many waterfalls start its origin. 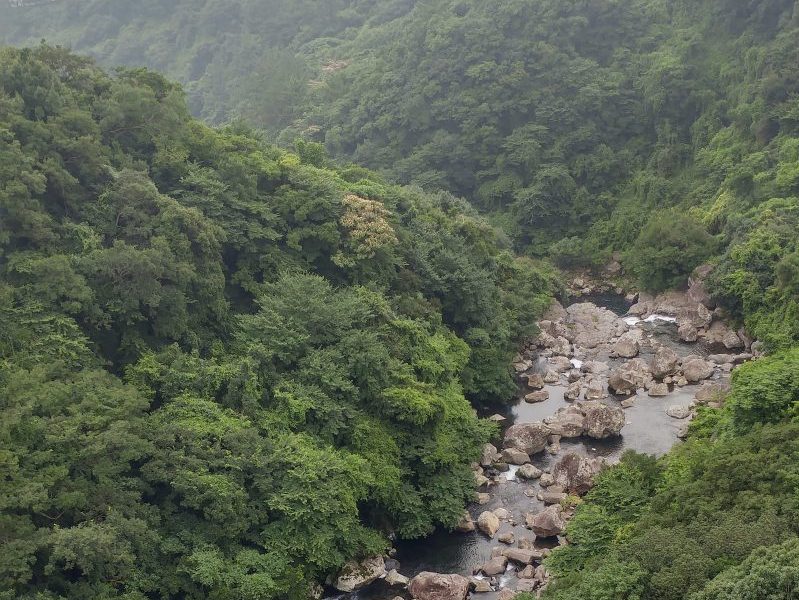 Cheonjeyeon falls are one of the most known waterfalls in Jeju island. It is a beautiful three-tiered waterfall surrounded by a Subtropical forest. The forest itself covers two sides of a valley and is a natural habitat for various plants.

“Cheonjeyeon” bears the meaning of “The pond of God”. According to a local legend every night seven fairies would descend from heaven to bathe here.

The Seonimgyo bridge goes over the river connecting the falls with the nearby Jungmum Tourist Complex. Seven nymphs, symbolizing the seven fairies from the legend, are depicted on both sides of the bridge.

Visiting all the three waterfalls takes around an hour. Reaching the first and second one is easy, but for the third one you will have to go through lots of stairs as it is located on the lower part of the valley, further from the rest.

Here the cliff is 22 m high and the water falls into Cheonjeyeon pond which is around 21 m deep.

Here the water falls from 30m cliff. In my opinion the second one the most beautiful from the three. In front of the tier there is a spacious platform for visitors to admire it and take pictures.

The third one is not as high as the previous two but is still beautiful. After the third one the river flows into the sea.

Cheonjiyeon is a 22m high waterfall located in the center of Seogwipo city. The name “Cheonjiyeon” (천지연폭포) has the meaning of “place where the sky connects with earth”. 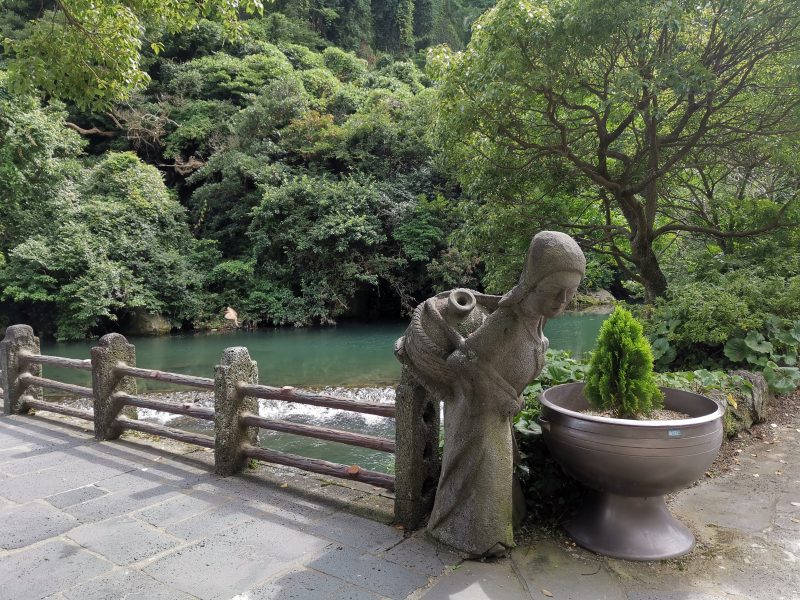 From the ticket booth to the waterfall is around 10 ~ 20 min walk, depending on how frequently you stop for pictures. The trail goes along the river and passes over it twice.

Near the entrance you can spot lots of Dol Hareubang stone sculptures. Dol Hareubang is the symbol of Jeju Island. The name “Dol Hareubang” or “돌 하르방” translates as “the stone grandfather”, “돌” is “stone” in Korean and “하르방” is “grandfather” in Jeju dialect. 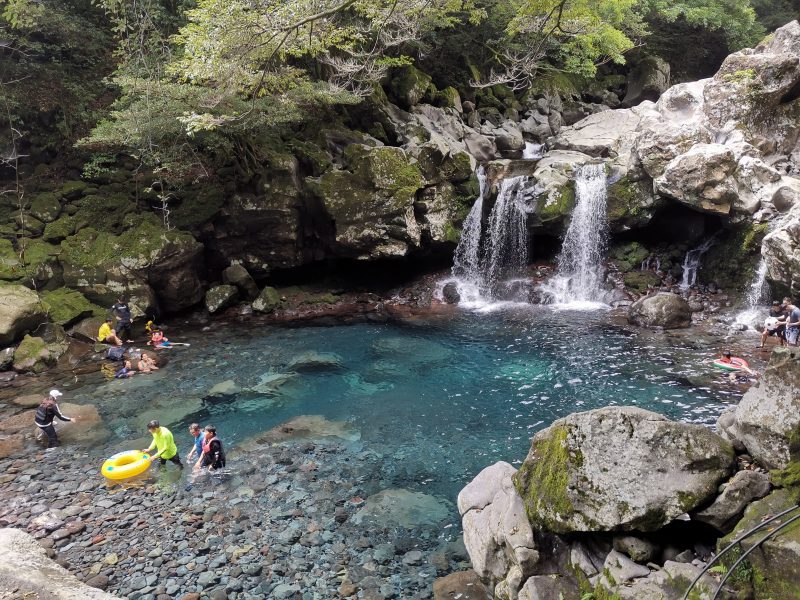 Wonang waterfall is a waterfall which never dries up. Its water comes directly from the depths of Halla mountain and thus is cold as ice. The water is extremely clean and pure with a mystic blue light. Swimming in it is allowed but because of the low temperature it’s hard to stay in for long. 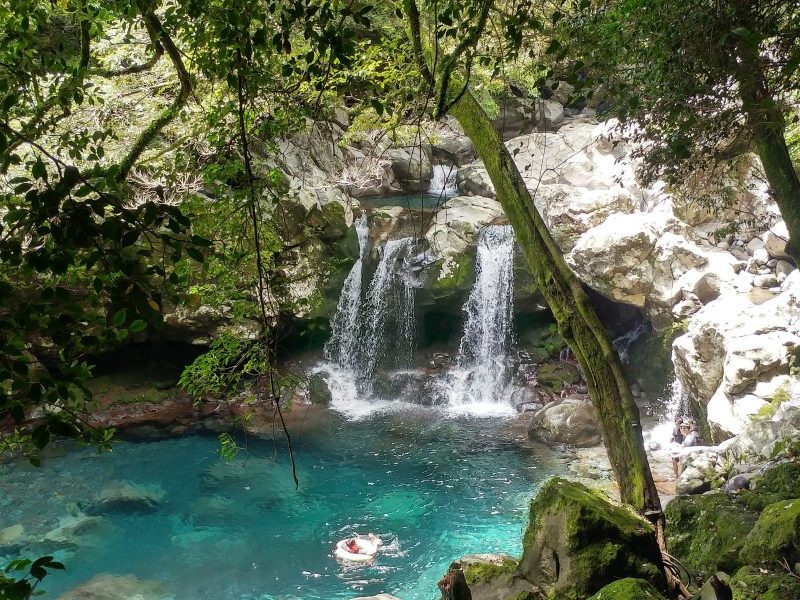 The trail going to the fall might be short but almost entirely covered with stairs. It takes around 5~10 minutes from the entrance to the fall.

Tip: The most convenient way to reach the fall is by car, but in case you are entirely dependant on the public transportation in Jeju, there is a bus stop just in front of the entrance. Also, you can combine visiting this fall with Cheonjiyeon fall as there is a bus that connects both falls.

Just like Jeongbang Fall, this one too falls directly into the ocean. Moreover, a stunning view of the Seogwipo coast is revealed from here. 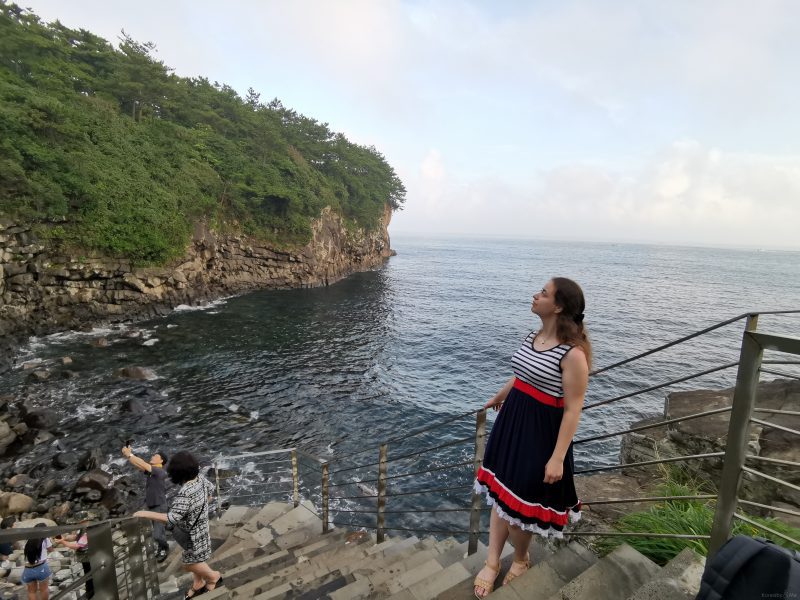 If you are in the area I highly recommend visiting both Jeongbang fall and Sojeongbang fall. Both are connected with an Olle path and is approxiately 10 min walk. 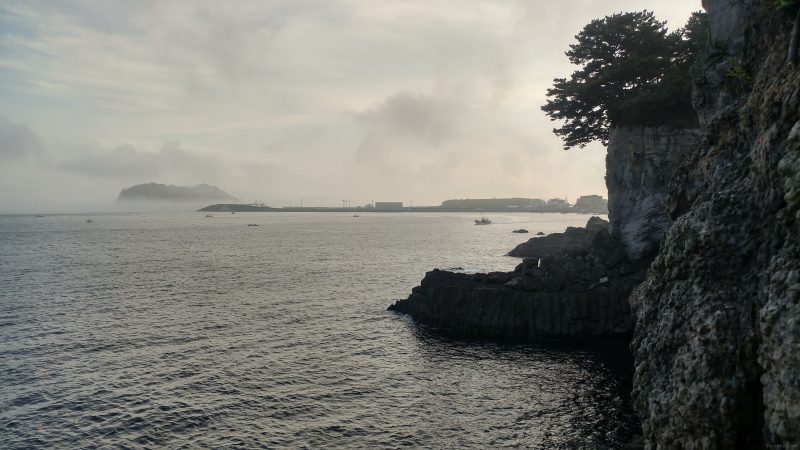 This waterfall is very interesting as it exists only during heavy rains, for the rest of the time you will be able to see only a rock. 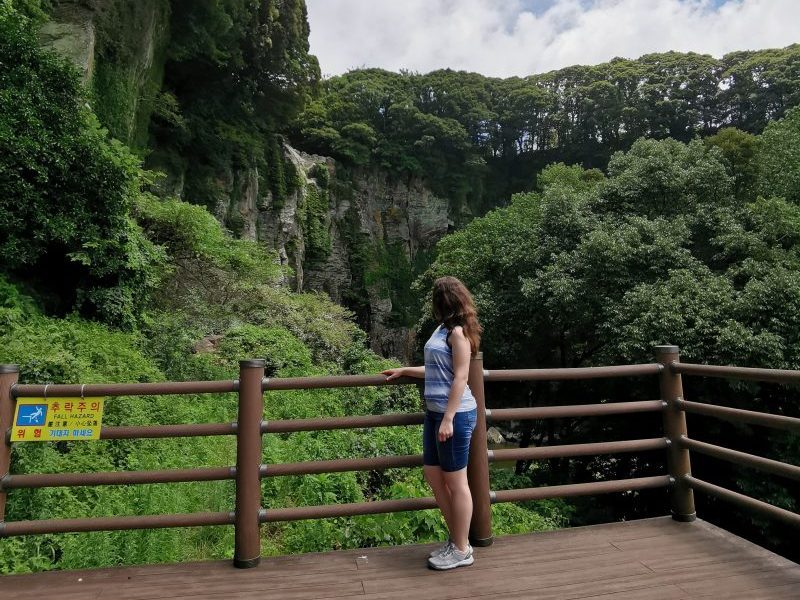 The name “Eungtto” refers to the entrance of an “eung”. In Jeju dialect “Eung” means a cave smaller than a small rock shade residence and “tto” – an entrance.

Tip: If you happen to visit Jeju island during the rainy season, this place worth a visit.

Read More: Seogwipo city – on the other side of Jeju island Sky Castle – Visit the filming site of this drama 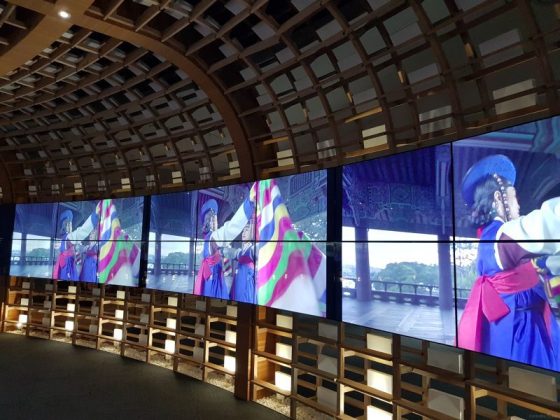