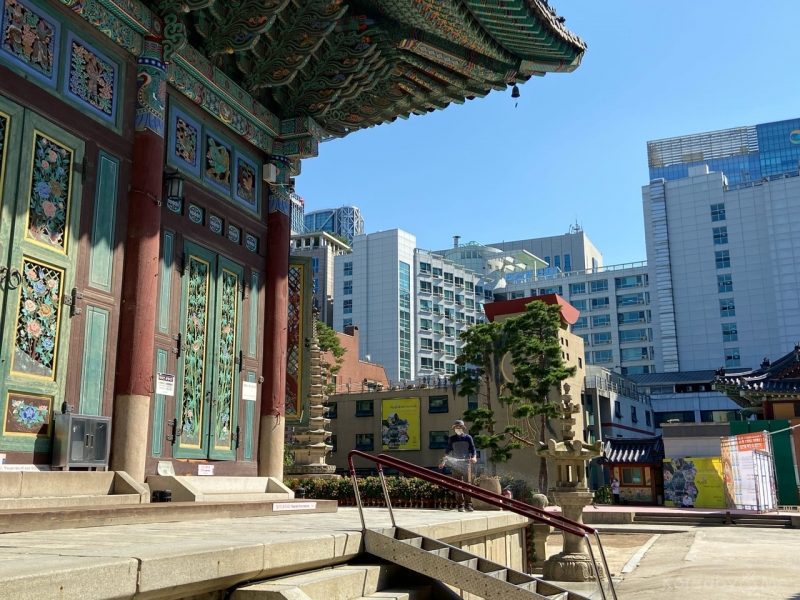 Korea has a wonderfully rich culture. You can see how the county is mixing its modern architecture with its heritage. And doing it perfectly! There are numerous numbers of temples at the territory of the country and I think that for sure the historical journey of Joguesa Temple worth your attention.

Table of Contents
The role of Buddhism in Korea
What should you know about the Joguesa temple?
Destination route
What else to visit near the temple?

The role of Buddhism in Korea

Buddhism was first adopted from China in the three kingdoms Goguryeo, Silla, and Baekje in the 4th century. First, it was introduced in Goguryeo and then gradually spread into the other two kingdoms. Buddhism came to Korea in the Chinese version, and its sacred language here is not Sanskrit and Pali, but ancient Chinese. During the reign of the United Silla and Koryo dynasties, Buddhism was the state religion of Korea. As a result of this millennium, a wonderful Buddhist culture was created: thousands of temples, statues, icons, a huge array of philosophical and theological literature.

In 1392, The Ultra-Confucian Li dynasty came to power and began limiting the influence of Buddhism. Buddhist monks were incorporated into the lower order “chongmin”, which also included serfs and prostitutes, and temple land tenure, which was particularly discontent at the end of the Kore dynasty.

In 1910 Korea became a colony of Japan, a country where the position of Buddhism in those days was much stronger. The colonial authorities tried to plant Japanese versions of Buddhism in Korea, but they did not take root in the country.

In the mid-seventies, Buddhists sharply intensified their missionary activities within the country and even attempted to enter the international arena, starting the propaganda of Korean Buddhism there as well. The number of churches began to grow rapidly and by 1989 reached 8,892. At present, it can be said that Buddhism in Korea is on a certain rise.

What should you know about the Joguesa temple?

Jogyesa Buddhist Temple is the most famous temple in South Korea located in central Seoul, which also serves as the headquarter temple of the largest school of Buddhism. Its peculiarity is that it is not surrounded by forests and mountains, like other Buddhist buildings. One of the most significant festive events held in this temple is the celebration of Buddha’s Birthday. A grandiose procession dedicated to this event ends in the temple – the Parade of lotus lanterns. The procession is usually held in May as Buddha’s birthday is the 8th day of the 4th month.

The temple erected in 1395, but the invasion of the Japanese almost destroyed it. It rebuilt back to its feet only in 1910, and based on the Jungdong Buddhist school. Original name of the temple is Gahwangsa, and during the Japanese occupation, it represented the strength of the Korean people and the Buddhist school. In 1937, the temple was moved to its present location and renamed again. The new name was “Taegosa”. It translates from Korean as “Great Old Temple”, which also did not last long. Subsequently, the modern name ” Jogyesa ” was given to the temple in 1954.

The first thing that greets visitors is One Pillar Gate with four heavenly guardians of Buddhism. They protect 4 points of the compass(east, west, north, and south) and also Buddhists. Unlikely ordinary temples are wooden ones, in here in Jogyesa you’ll see iron ones, which is very unique.

Going further there are magnificent over 450-year-old Chinese Scholar Tree and 500-year-old Lacebark Pine Tree. People believe that The Chinese Scholar Tree converts negative energy into positive energy and happiness, which especially beautiful in August during the flowering period. Whereas, Lacebark Pine tree lists as a Rare Natural Monument because these types of trees grow and reproduce slowly making them very rare.

The name of the main hall of the temple is Daeungjeon, inside which there are three golden statues of Buddha, which repeat its main stages of life. On the left sits Amitabha Buddha, at the center Shakyamuni Buddha, and on the right Bhaisaya Buddha. Inside the temple is covered in beautiful lanterns which symbolize wisdom because they bring light into this world.

In front of the Daeungjeon locates The Ten Story Buddha Relic Stupa which brought by the Sri Lankan monk Anagarika Dharmapala. But originally this relic kept by the royal court of Thailand and only then given to Dharmapala.

The next building is a colorful Brahma Bell Pavilion that keeps four instruments: Brahma Bell, Dharma Drum, Cloud Gong, and Wooden Fish. The music of these instruments represents the safety of all beings in the world.

In the Hall of Bodhisattva, you can find a big golden statue of Gwanseeum Bosal with 99 Bodhisattvas behind. These statues represent the next great 100 years of Jogyesa Temple.

To find Amitabha Buddha with judges statues you should go to Paradise Hall. According to believe these statues decide in 49 days after death who goes to heaven or hell.

Compared to most temples which are in deep mountains Jogyesa Temple is located between the buildings in the center of Seoul. Therefore, the location of the temple is very convenient for visitors. You can reach the temple by subway: Anguk Station (Line 3) Exit 6, Gwanghwamun Station (line 5) exit 2. And either way is by taxi and walking.

What else to visit near the temple?

There are many stores and shops near the temple where you can buy a monk’s costume, Buddhist souvenirs, wooden gongs, etc. Moreover, the temple is next to Insa-dong, which is popular with foreign tourists. Also, Gyeongbokgung Palace, Changdeok-gung Palace, Bukchon Hanok Village, and other famous sites are close by. So, do not hesitate to take a walk!

Check out: Four Essential Things to Include in Your Insadong Seoul Tour