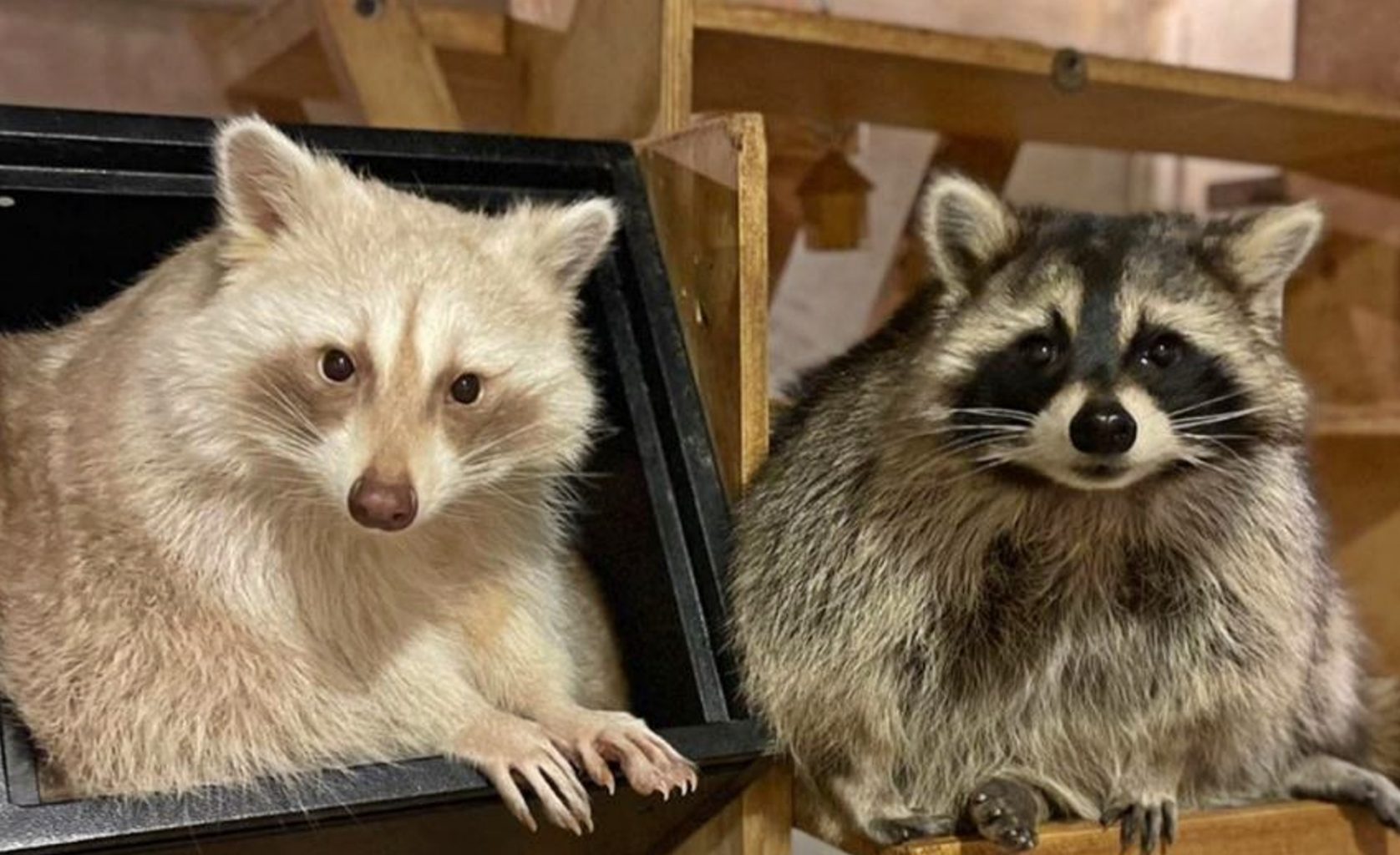 I love raccoons! They get a lot of flack for being dumpster-diving pests, but I think they’re lovable and cute. However, I had never seen one in real life, until I found out about Kkukkune. 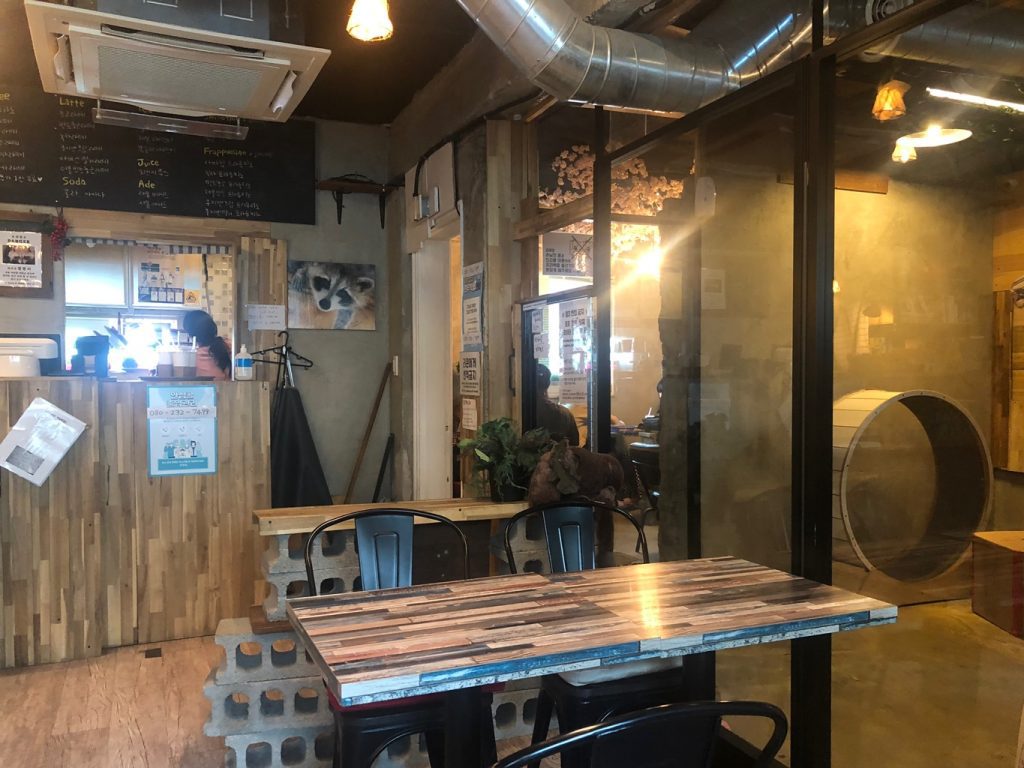 Located in the wonderful neighborhood of Hyehwa, Café Kkukkune is the home of five adorable raccoons. The café is an extremely popular spot for both locals and tourists alike. They have board games, psychological tests for couples and friends, as well as various beverages.

As you enter, you are greeted pleasantly by cozy vibes and friendly staff. There were two sections of the café that had seats. We settled on the seat next to the raccoons’ enclosure. We had something simple to drink while we played some games. In the middle of our game, I noticed a furry friend near the window. There was a cat amidst the family of raccoons, just basking in the sun.

The Raccoons of Café Kkukune 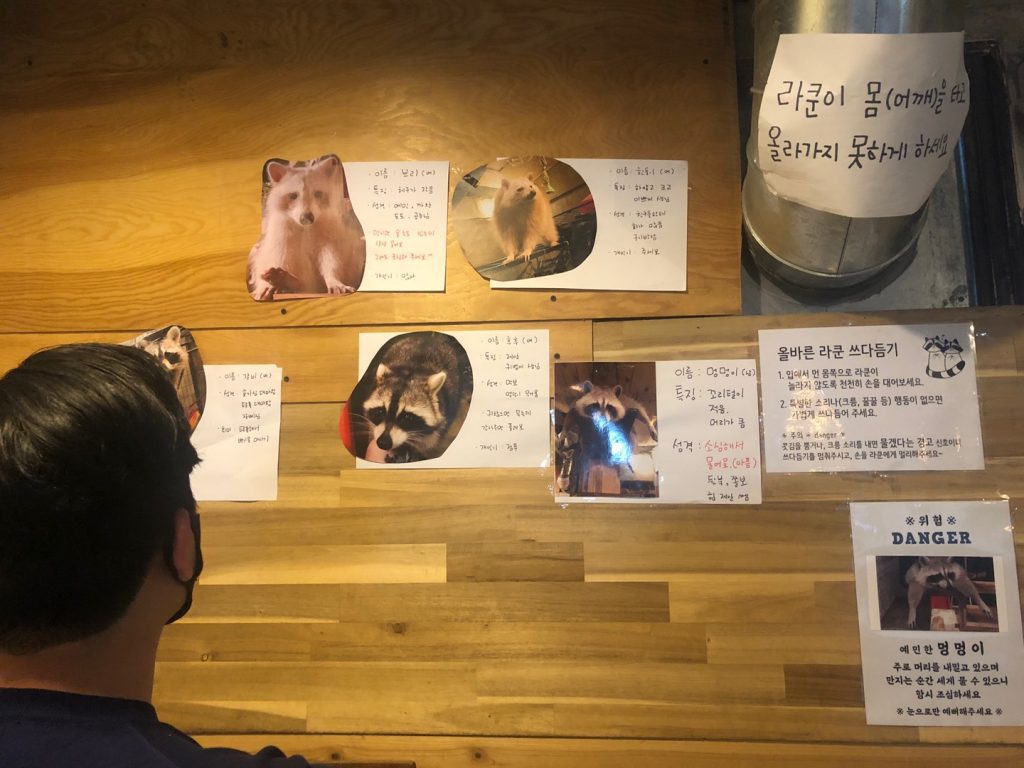 After we played some games, it was time to enter the raccoons’ enclosure. On the wall just across the entrance, there was information about each raccoon in Kkukkune. From the friendliest to the laziest, and even the most dangerous. The raccoons were just lazing about when we entered. As if, unbothered by our presence. However, that changed as soon as they noticed the treats in our hands. 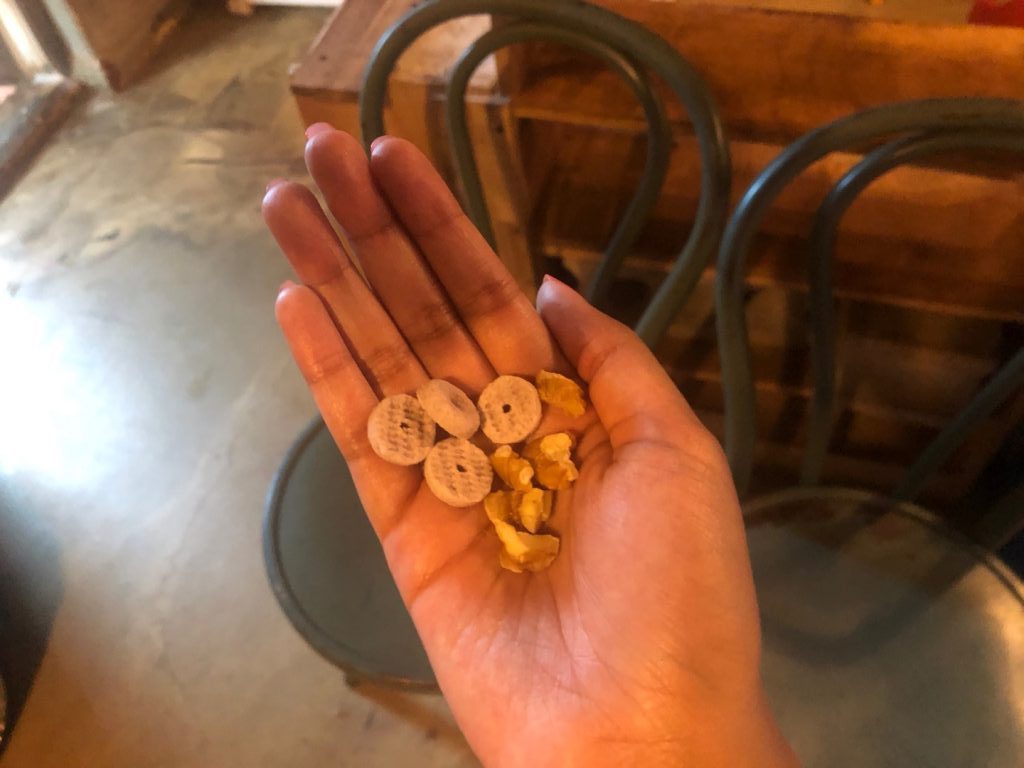 Two of the raccoons seemed really happy about the treats. Their eyes flew open, and their snouts twitched. They went from lazing about and were suddenly alert and curious. 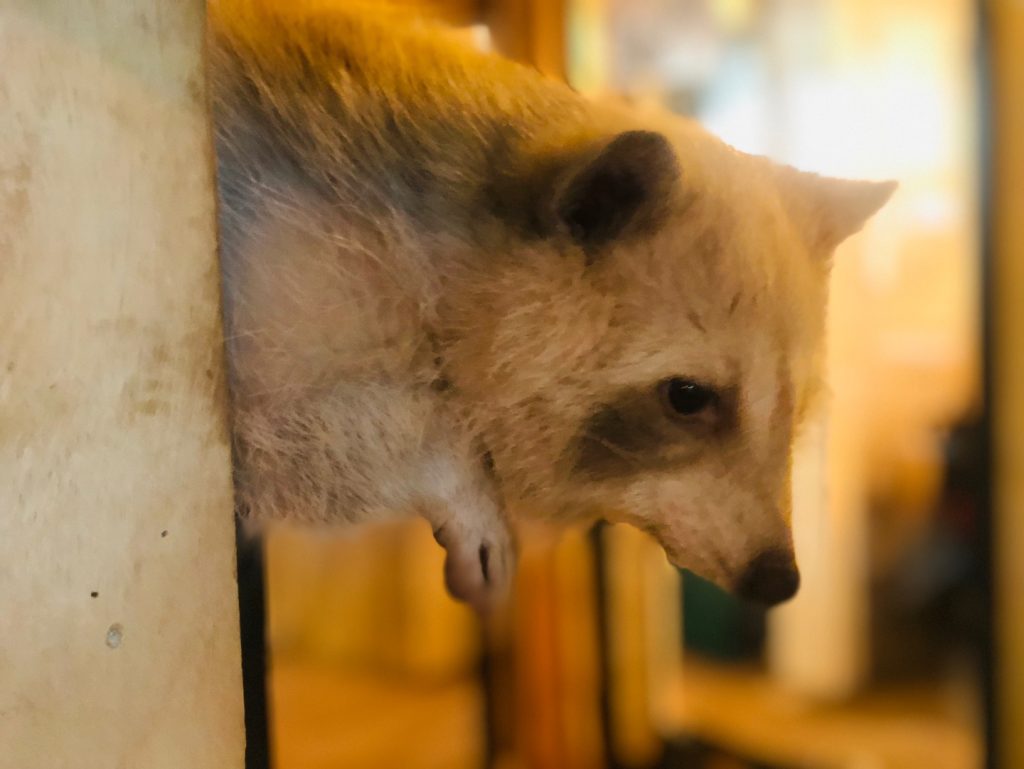 I was slightly afraid of feeding them at first. Seeing that I was nervous, my husband stuck his hand out and gave his first treat to Bori, the cream-colored raccoon. My husband then gestured for me to try as well. I gingerly reached my hand out and held the treat just a few inches from the raccoon. It was the most incredible experience ever! The way Bori carefully and gently grabbed hold of the treat was unexpectedly adorable. She had a really calm and sweet personality. 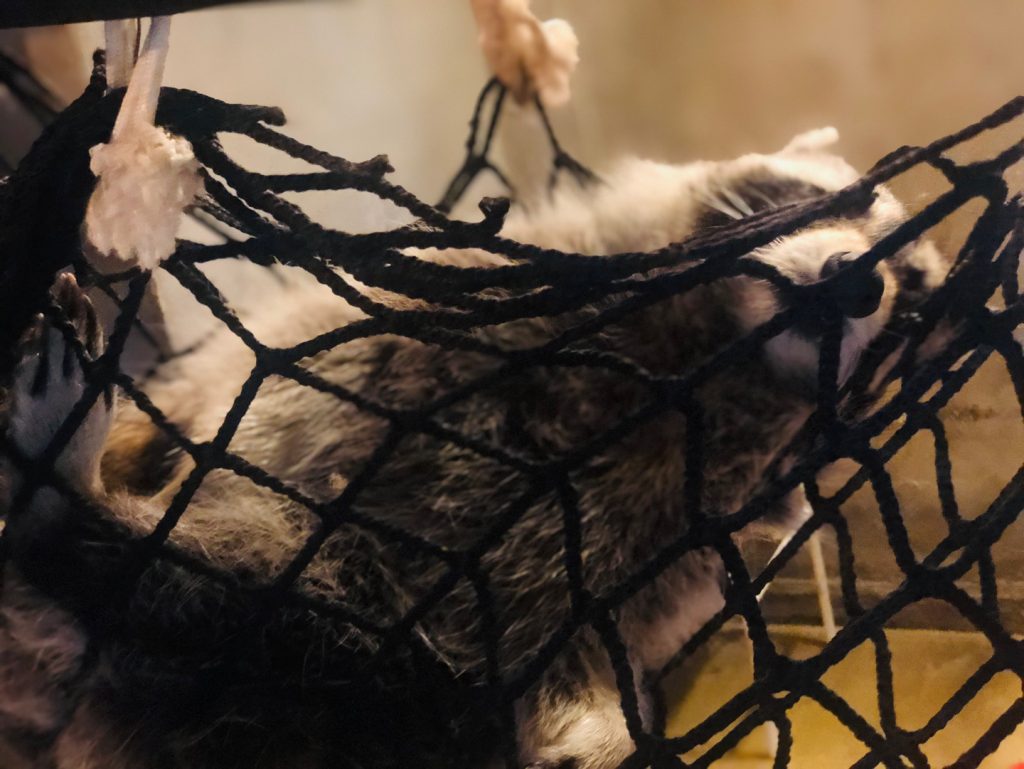 Next up, was the most adorable and laziest raccoon in the room. Her name was Galbi. According to the information given, her favorite thing to do is to chill in a net hammock. Even as we fed her, she refused to get up. She laid in her net whilst grabbing at the treats. I even said to my husband, “She’s my spirit animal,” jokingly. Even touching her fur slightly as she lay there did not seem to bother her. She was more interested in the nuts than even her friend Bori was.

After we were done feeding the raccoons, we exited the enclosure to let them enjoy their naps. I could not stop staring at them from my seat while they were sleeping afterward. I was entranced by those fluffy little balls of cuteness! After a few more games and psychological tests, we finally decided to depart from the café.

I would totally recommend this café to those who are looking for date ideas in Seoul or to friends who want to gain a new experience in South Korea. Raccoon Café: Kkukkune was definitely memorable. 10 out of10 stars!

To find out about other animal cafes in South Korea, Click Here to check out my article about Zoolung Zoolung! 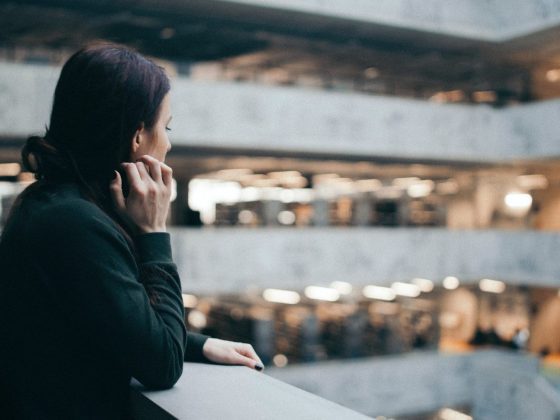 Loneliness of a Traveler: Finding Your Community in Daejeon 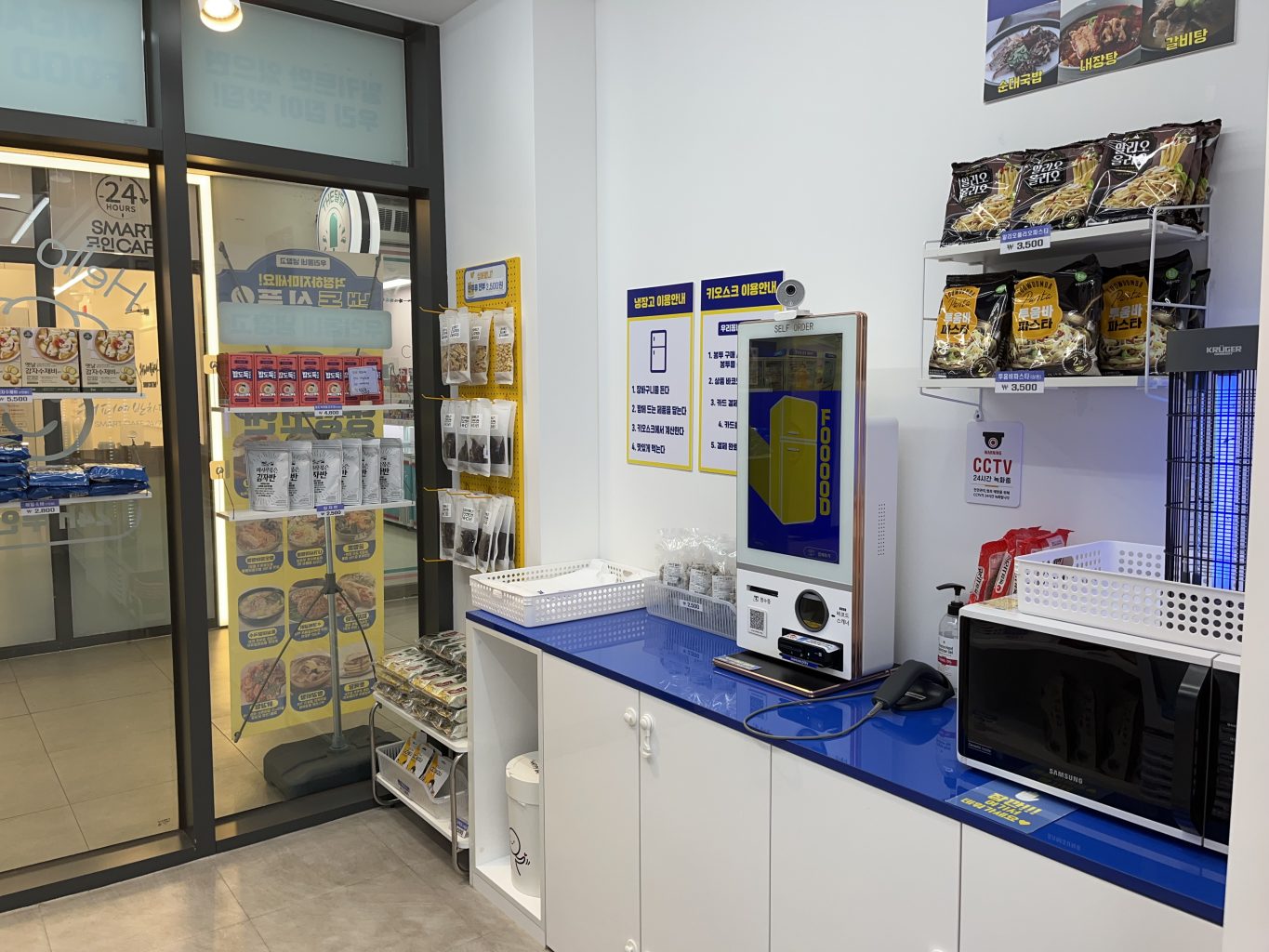