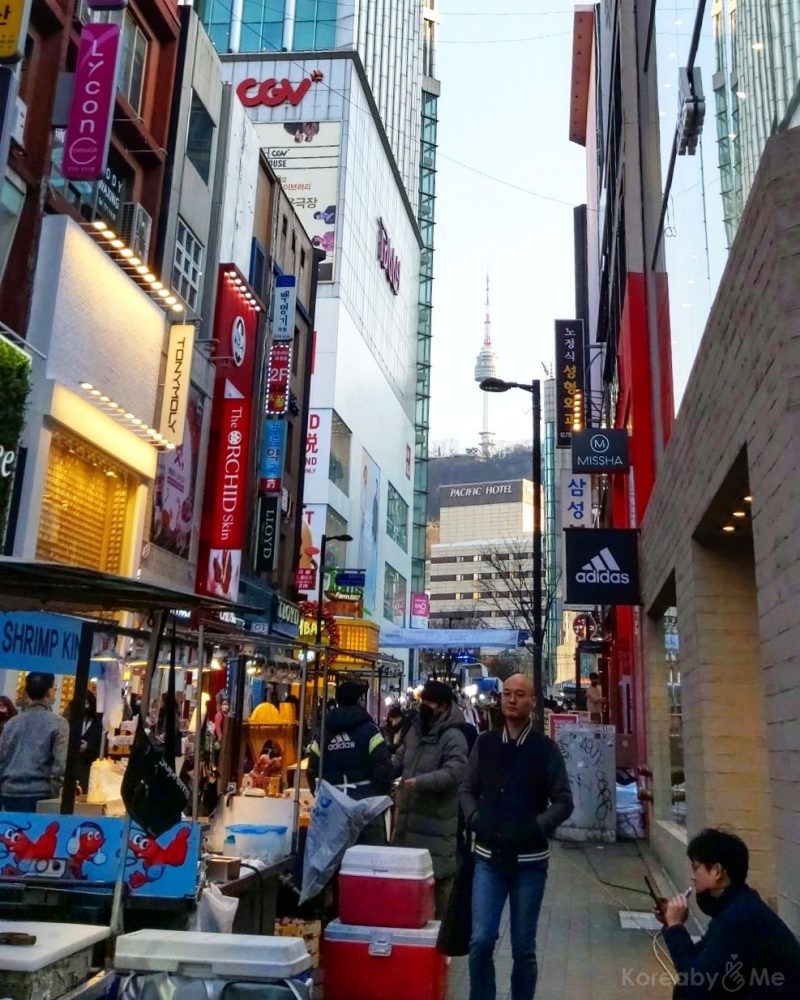 Spending one day at Myeongdong

I am quite sure that you have heard of Myeongdong. Myeondong is a neighborhood in Seoul, South Korea. It’s located between Chungmu-ro, Namdaemun-ro, and Eulji-ro. Although some people live there is mostly a commercial area. Actually, it is one of the biggest in Seoul, and therefore it became a huge tourist attraction in the city. You can find all kinds of stores and malls, and it’s also a parade route.

In 2011, 2012 and 2013, Myeongdong was listed as the ninth most expensive shopping street in the world. But you can also find cheap and worth buying items. Believe me when I say the number of stores will easily catch your attention and shopping spirit. The main goal when going there is obviously shopping, but there are also nice cafes to hang out.

Myeongdong sets its date back to the Joseon Dynasty. Back then, instead of being called Myeongdong, the place was called Myeongryebang, and it was mostly a residential area. During the Japanese invasion, its name changed again to ‘Myeongchijeong’. It was during that time that Myeongdong started becoming more of a commercial area instead of residential. The development of the neighboring area Chungmu-ro influenced this change. Myeongdong only became ‘Myeongdong’ officially after Korea’s independence in 1946.

Shortly after the Korean War in the 1960s, Korea’s economy grew, and alongside it, commercial areas also gained its own strength. Myeongdong started flourishing with the city renovations, such as the building of highrise buildings. A lot of commerce was opened then: department stores, shopping centers, restaurants, upscale shops, and many boutiques. All of this made Myeongdong really trendy among young people in the 1970s. A fun fact about Myeongdong is that despite it being a commercial area, it also became a popular location for political demonstrations and protests. As of March 2000, Myeongdong has been designated as a special Tourism Promotion Area and is one of the stops on the official Seoul City Bus tour’s main route.

Myeongdong is one of the best places in Seoul if you are looking for street food. Street food is something that has been trending a lot for the past few years, and South Korea is all about trends. But Korean street food has gained attention even before the trends! South Korea has a huge variety of street food for you to try and for pretty much everyone! Even if you are a picky eater you will be able to find something that you like. I am a picky eater myself and I was able to enjoy a lot of the street food in Myeongdong.

My favorite ones were definitely the gyeran-bbang (계란빵) and the corn dogs. The gyeran-bbang (계란빵) is exactly what the name suggests: bread with egg, and sometimes cheese. It’s ridiculously cheap – you can find it for around 1,500 won (around $1,30). The size is totally worth the price, and it’s fun to see how the sellers prepare it. Since it’s street food you can see the sellers preparing it right in front of you, which makes the experience even better! Another street food that is absolutely delicious is the corn dog! Corn dogs are nothing more than a soft dough filled with sausage or cheese – or both! The prices for corn dogs vary from 1,500 won to 3,000 won. There are a lot of options: half sausage half cheese, all cheese, all sausage and much more.

Myeongdong is the right place for you to find not only Korean brands but also worldwide famous brands. There are malls and street stores, wherever you feel more comfortable to buy. As I mentioned before, Myeongdong is an expensive place for shopping, but if you avoid going into the malls it will be way cheaper. For example, if you buy socks from street sellers you will pay around 900 won for a pair of socks, whilst it costs 5,000 won inside a shopping mall. Myeongdong is a great place to buy oversized clothes, lingerie, and makeup.

There are a lot of makeup stores. And most of the makeup stores in Myeongdong are always doing sales. Since it’s a very crowded place, stores are willing to sell their stuff for a cheaper price. Myeongdong has stores like Etude House and Sephora, but also stores that have a lot of different brands of make up for you to choose.

Not only makeup but also skincare! You must know that South Korea is the best place to start a consistent skincare routine. They have not only the best products but also the best prices. Myeongdong is the right place to go and find all kinds of skincare products.

Here are my tips for you to enjoy Myeongdong as its best! I hope you get to enjoy this amazing neighborhood as much as I do every time I go there. You can get there by either subway or bus depending on where you are departing from. The visit is definitely worth it.