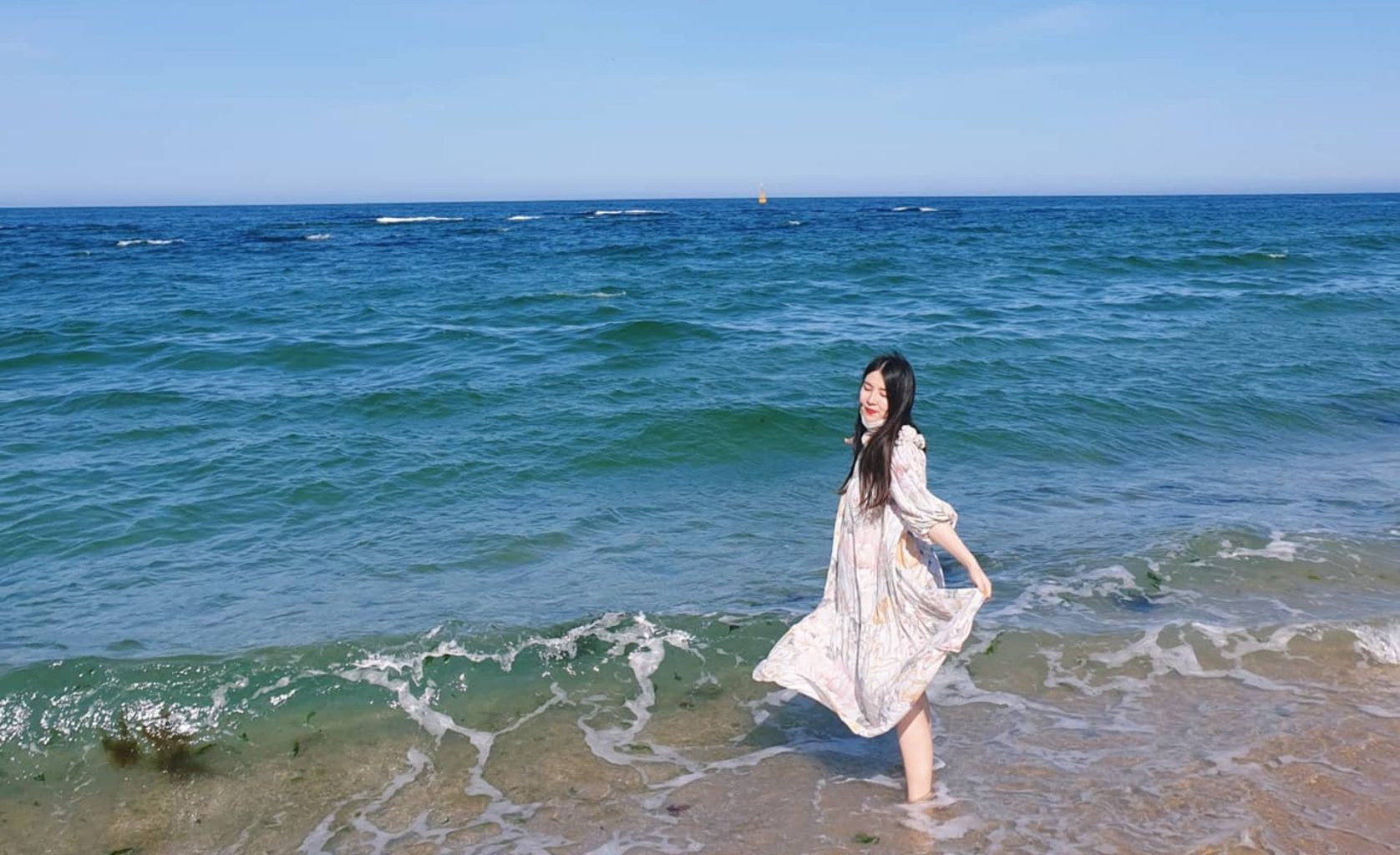 Sokcho: The Perfect Escape to Nature

Table of Contents
Sockcho’s Natural Beauty
My Trip to Sokcho

Every summer vacation there is only one option when it comes to enjoying your time to the fullest. That is a sunny beach, pleasant lukewarm water, and that feeling of freedom you get while lying on the hot sand. Apart from Haeundae Beach, one of the most famous beaches in the country, there is a place called Sokcho – a city in Gangwon-do province. 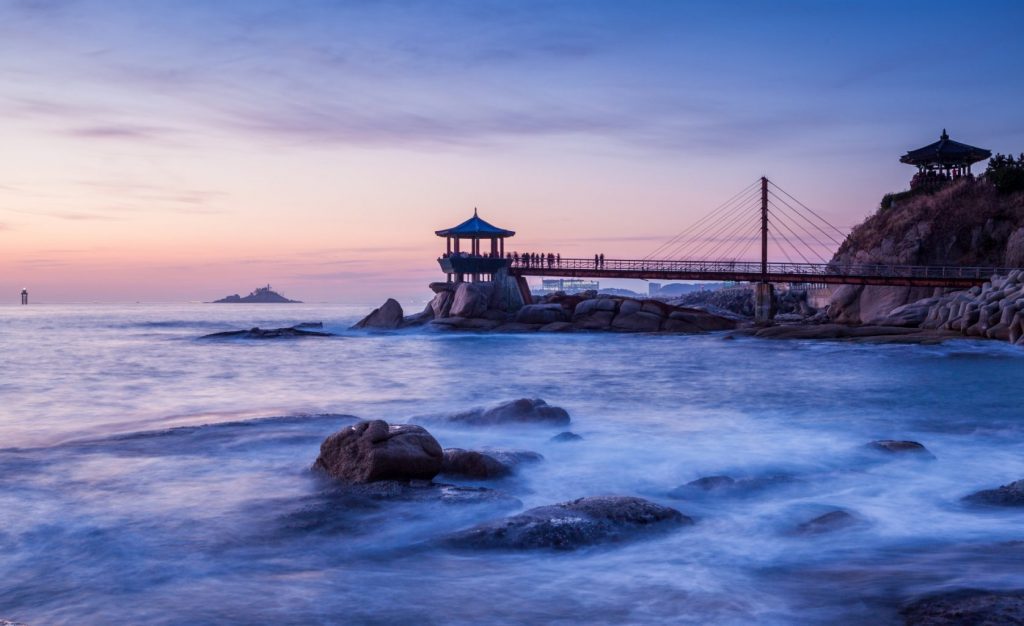 Sokcho is also very famous for its Seoraksan National Park, which UNESCO listed as one of Korea’s World Heritage sites. Seoraksan is the 3rd highest mountain in South Korea. The fact that Sokcho not only has the ocean but also a National Park just adds to the appeal of the place. Everybody can enjoy the beauty of the mountains and the sea, making it a very good destination for tourists, not only from within the country but also from all around the globe as well.

Sokcho is also famous for its beach and natural hot springs, along with seafood. Of course, all of the seafood is caught straight from the sea and is as fresh as can be.

My Trip to Sokcho

So as soon as the summer weather was good enough for swimming, my boyfriend and I decided to spend some time in Sokcho. We planned the trip beforehand for a couple of days. I am the kind of person that usually plans every stop and sightseeing destination beforehand. So, of course, I planned exactly what we were doing to do. I got down to the particulars, including a list of cafes to my liking. Not going to lie, it was pretty fun to make our to-do list in Sokcho. 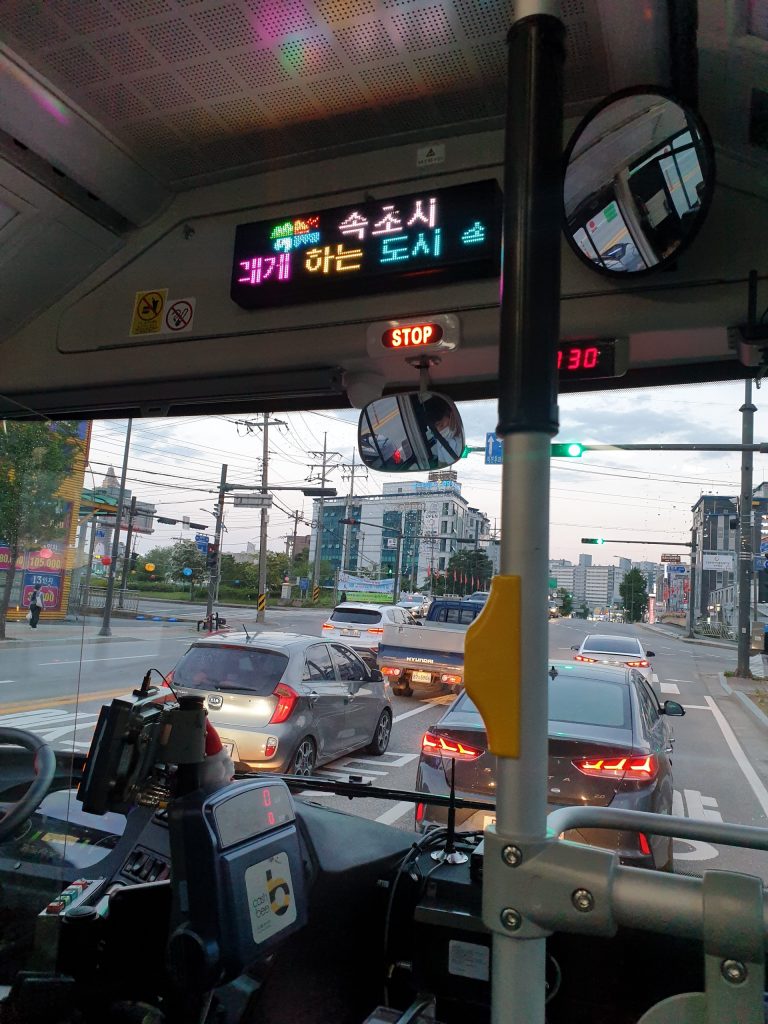 We took a bus to Sokcho and straight after arriving we checked into the hotel. Then, we made a dash to the beach, which was called SOKCHO bathing resort, but in short, people just call it Sokcho Beach. The beach is usually open from July 1st to August 31, but if you want to be sure whether or not it is open, you can always call this number: 033-639-2665

The beach is one of the most romantic places in Sokcho. There is a pine forest nearby therefore the air is very fresh and calming. In the evenings the lights of fishing boats are burning in the distance as sailors toil in catching fish. 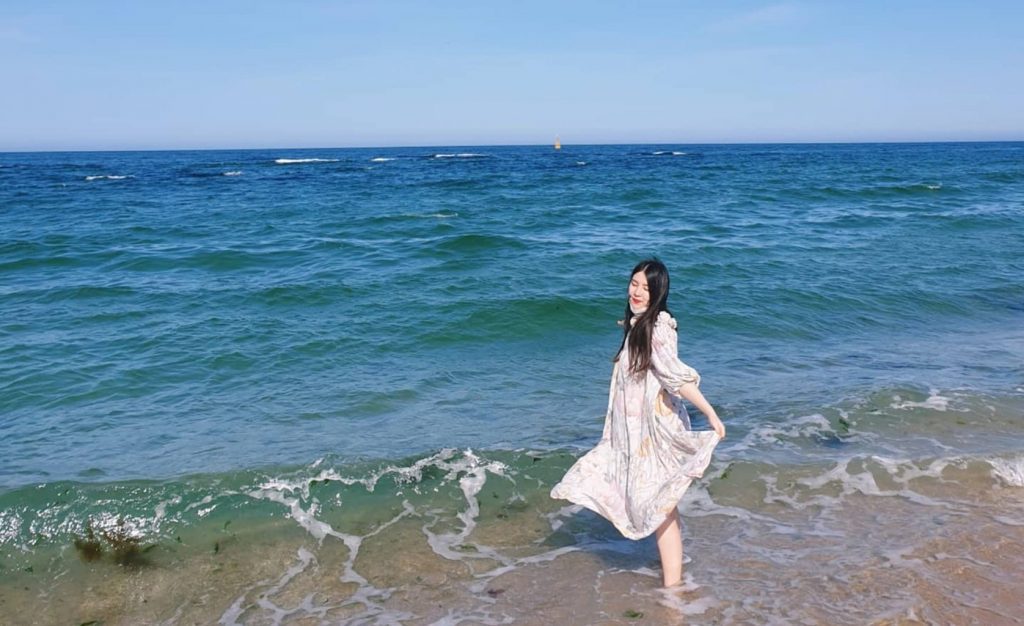 We spent some time on the shore. I took tons of photos both for preserving the memories of this trip with my boyfriend, and also for my Instagram profile. The pictures came out so colorful and full of life! 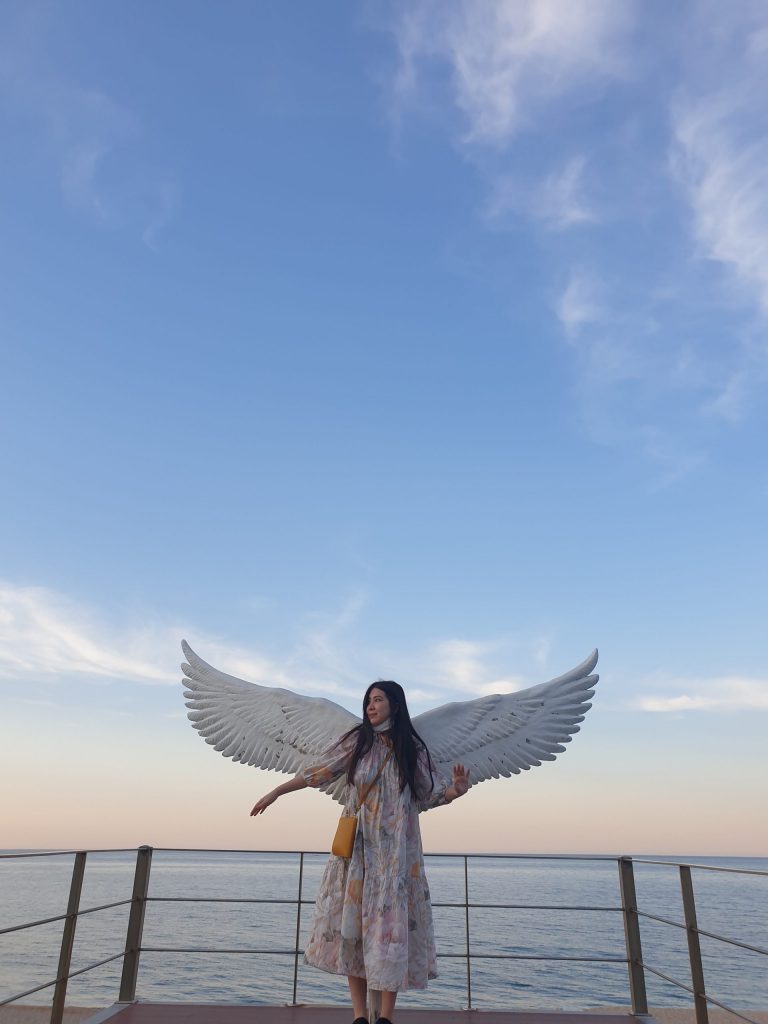 As soon as I posted them everybody kept on asking me where it was taken. Some people even decided to go to Sokcho as well after seeing my pictures and videos from this trip. And I say that it was a good decision on their part. I am sure they enjoyed their time just as much as I did.

After spending some time on the beach and enjoying the bluest sky and the feeling of the warmest water on our feet, we headed to the Abai Maeul. It was a very interesting place, full of a nostalgic atmosphere from Korea around the 70s. One of the reasons why this place is so famous is because of the unique Abai Sundae, which is the squid stuffed with meat and vegetables. The dish is very popular and only found in South Korea, but usually, it is the pig’s intestines that are stuffed with the same filling. 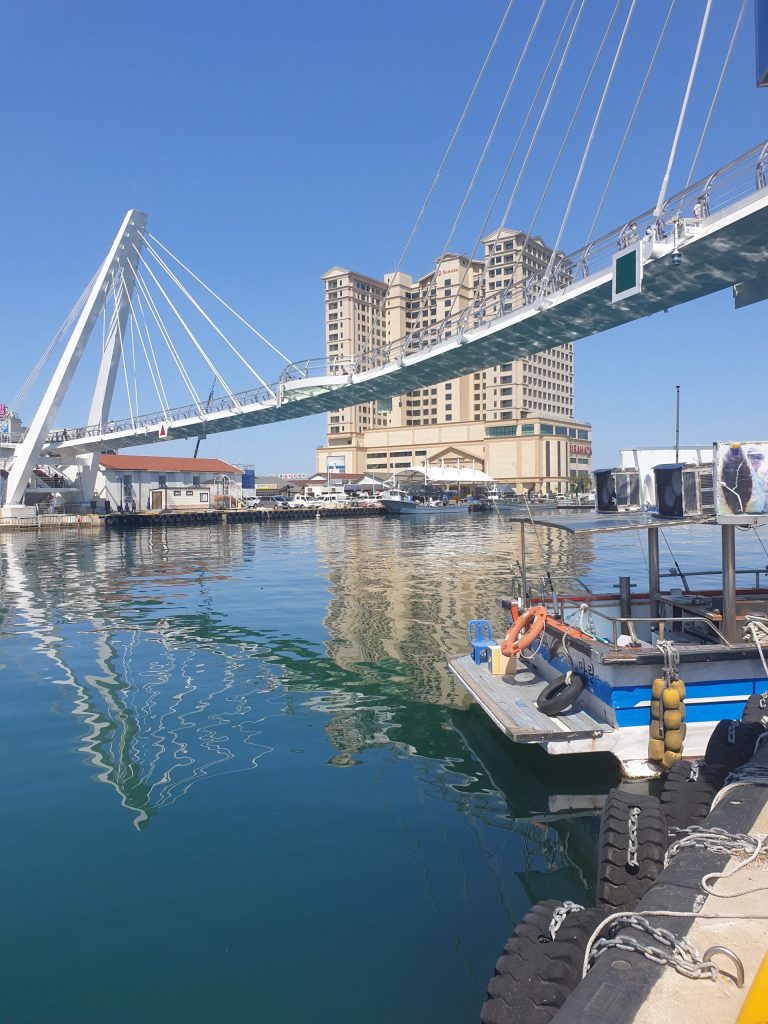 From there, we rode a boat called the Abai village Ferry. It took us to a village that is separate from the mainland. There we tasted all kinds of traditional food. I even found a Russian market! I have spent some years in Russia, so it was very pleasant for me to find familiar Russian words there. The transportation system is very interesting and the ride costs only 500 won. So, once you are there, you shouldn’t have too much of a problem getting around.

If you are not interested in traditional food, you can always spend some time in a beautiful cafe. There are tons of them throughout this village. We chose Cafe Oasis. The main feature of this cafe was that you can take a picnic set with beverages and some additional cute props to take nice pictures with 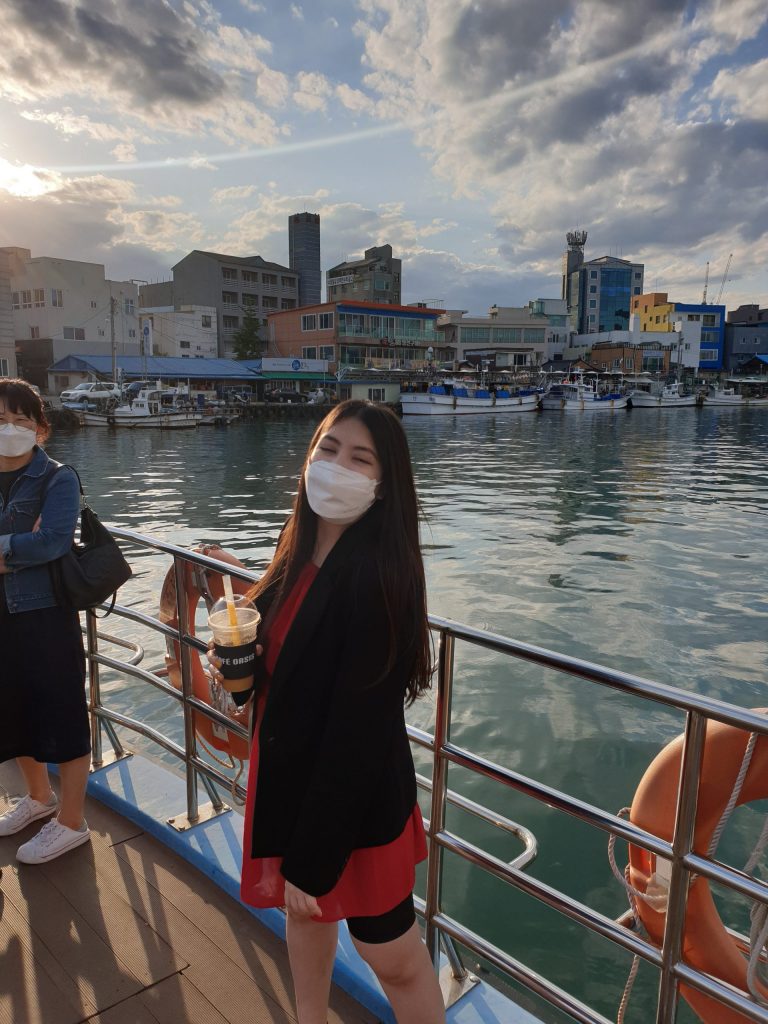 . You can either order a picnic set beforehand through Naver or just come straight to the cafe. Check out the pictures of each of the baskets, then decide which one suits you best. The base time for the picnic is two hours. For every 30 minutes after that, you ought to pay 5,000 Won. 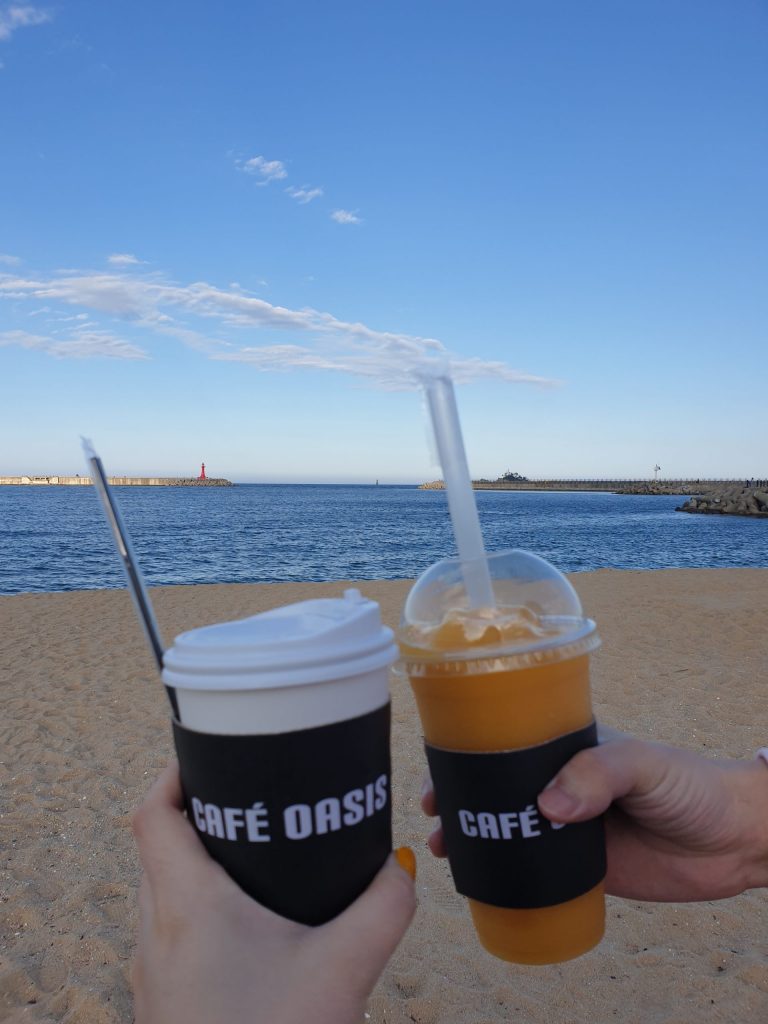 As for us, we just decided to take some tasty drinks. In my case that was Mango juice. Then, we sat on the shore of the sea, enjoying the relaxing atmosphere and nice sea breeze. During that time we just sat there talking about everything and nothing in particular.

That was the end of our first day in Sokcho. We decided to take a bus back to the hotel. The bus drivers were very nice, polite, and smiled a lot. They welcomed every person coming in and wished them a lovely day on the way out as well. That was really nice.

We could not wait for our second day in Sokcho.