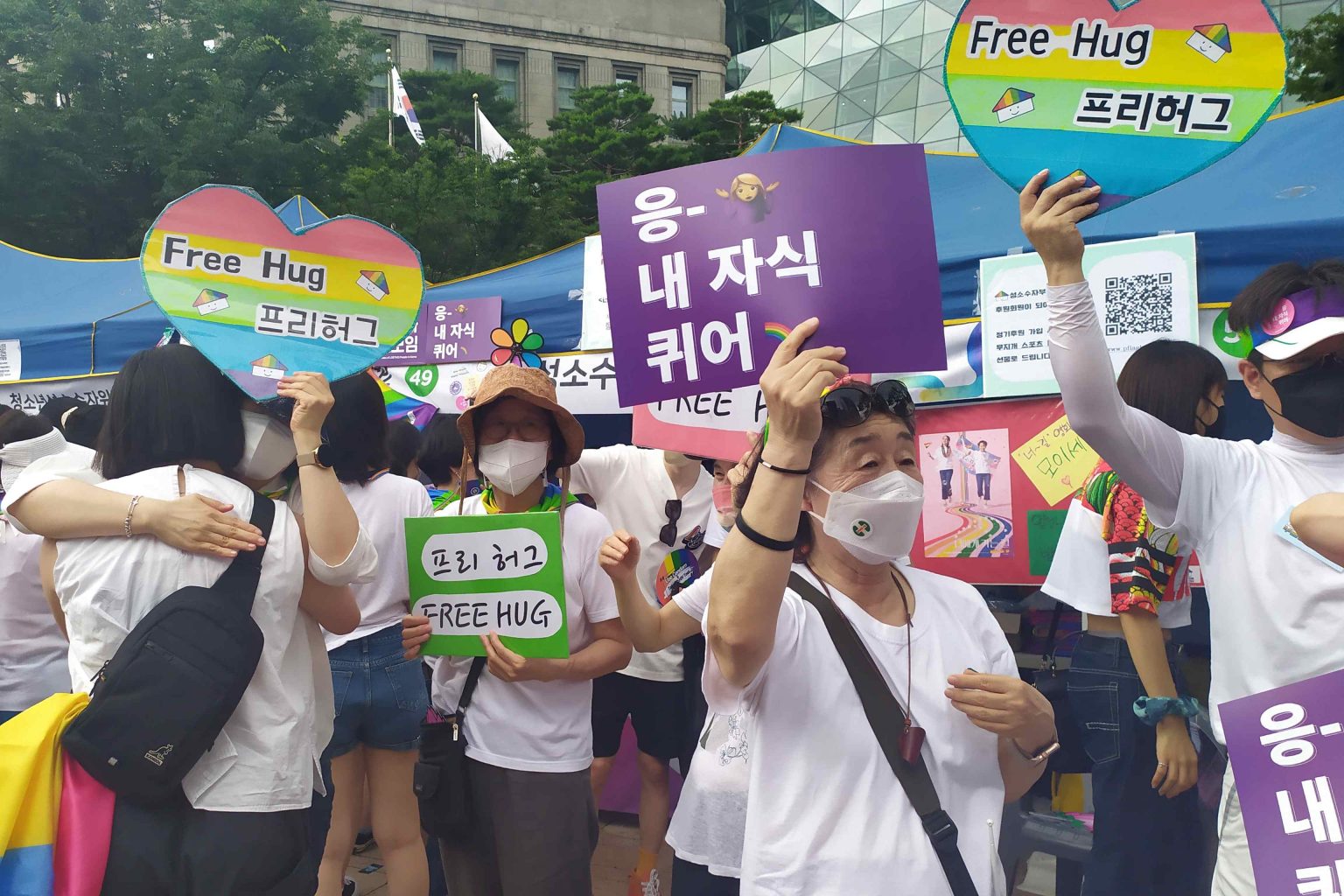 The Seoul Queer Culture Festival was organized to celebrate diversity and help people feel accepted. While this is the intention of pride festivals around the world, this was not the pride parades of the west. Everyone in attendance was courageous, full of love, and unapologetically showed the most authentic versions of themselves.

Before I begin, I feel that I should explain my own background and biases. In Korea, pride and the Seoul Queer Culture Festival is an extremely controversial event. And, no matter how much I tried to keep it neutral, my feelings took over as I was writing this article.

I am a cis-gendered straight white-presenting woman. I’m not a member of the LGBTQ+ community, but I was raised as an ally. There have always been openly queer people in my life. In fact, I knew so many gay and lesbian couples growing up that as a middle school student I was shocked when I heard the news gay marriage had become legal where I was living. I had just assumed it was a completely normal part of life. Before then, I didn’t even realize that there were people who opposed queer existence.

Fast forward to moving to Korea. I also didn’t realize the extent of hatred towards the LGBTQ+ community before I came. G Dragon wore a skirt and assumed Korea was open to queer identity. I couldn’t have been more wrong.

Reality of the Queer Experience in Korea 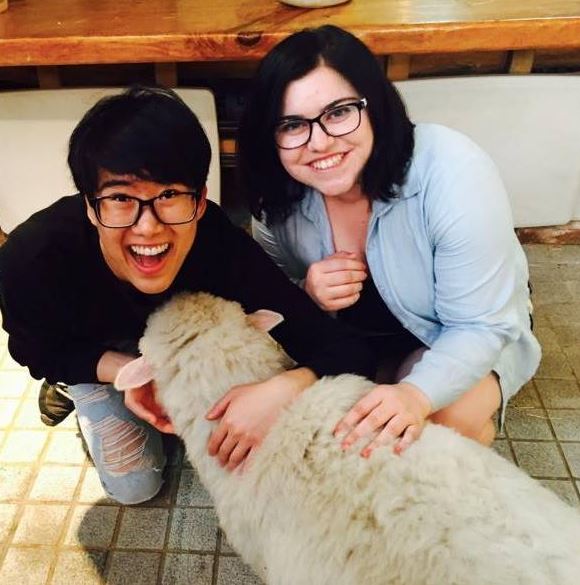 When I first came to Korea, my best friend was a queer person. Later, he became my partner. Then, in 2016, I lost him. He became one of the many queer people in Korea to leave this earth rather than face hatred and discrimination on a daily basis.

It was a devastating wake-up call to what queer people in Korea face. But still, as a foreign student, I was sheltered. I didn’t understand the extent of what my partner was facing before he passed, and I probably never will.

But, I got closer to understanding when I began working at a Korean company whose main overseas customers were POC and the LGBTQ+ community. There was blatant homophobia and racism throughout all levels of the company. But, they did everything they could to get as much money as possible from the communities they hated. The queerbaiting was extreme. Ultimately, I left as soon as possible and began working for KoreabyMe. 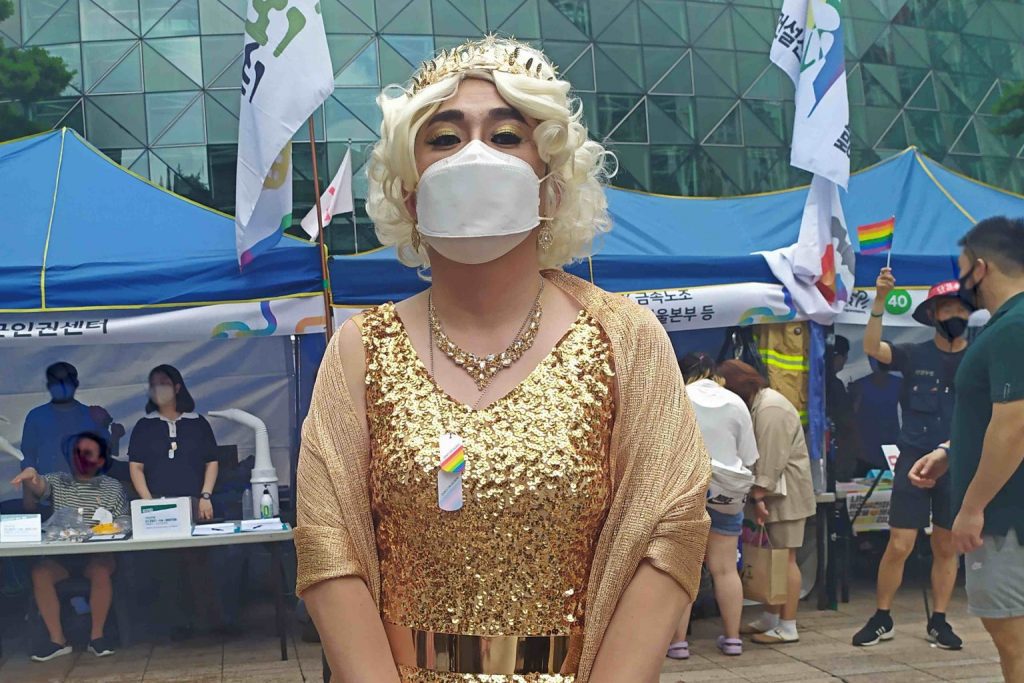 Now, working as the senior editor of KoreabyMe, I am able to publish articles like this. However, I am careful with the word choice of titles and cover images of articles to minimize controversy as much as possible. And of course, to protect writers from being targeted themselves. Still, I have only seen what homophobia is like in Korea as an outsider. This is just a taste of how extreme it can get.

When I arrived at the Seoul Queer Culture Festival, I saw the mass of hatred I have been trying to protect our queer writers from for the first time.

It became evident just how controversial of an event this was going to be from the moment I arrived at the Seoul City Hall subway station. As I headed towards the exit, both sides of the subway station were lined with police. I didn’t see a single rainbow until I made it to the escalator of exit 5. 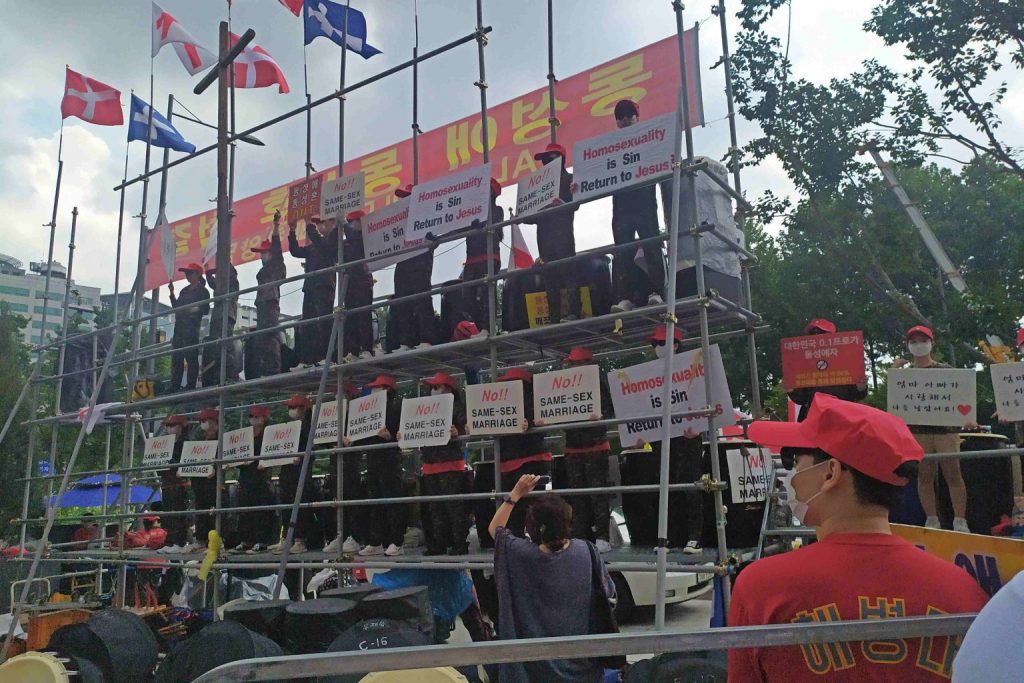 Nevertheless, I continued along a path lined with police on both sides. Finally, after a few minutes of walking, I came to the entrance of the Seoul Queer Culture Festival without any problems.

The Seoul Queer Culture Festival 2022 was held outside city hall, on a large open grass area. The entirety of which, was completely barricaded off and surrounded by police. Although the walk to the festival was chaotic, I felt completely at peace as soon as I reached the entrance.

Once I entered, the first thing I noticed was how much the festivals differed from the protestors outsides’ expectations.

As you may have noticed, Seoul’s  Queer pride festival occurred in July, despite pride month being June. This was because approval permits for the festival were delayed. Many government officials and powerful groups did not want a queer festival to occur in Korea. 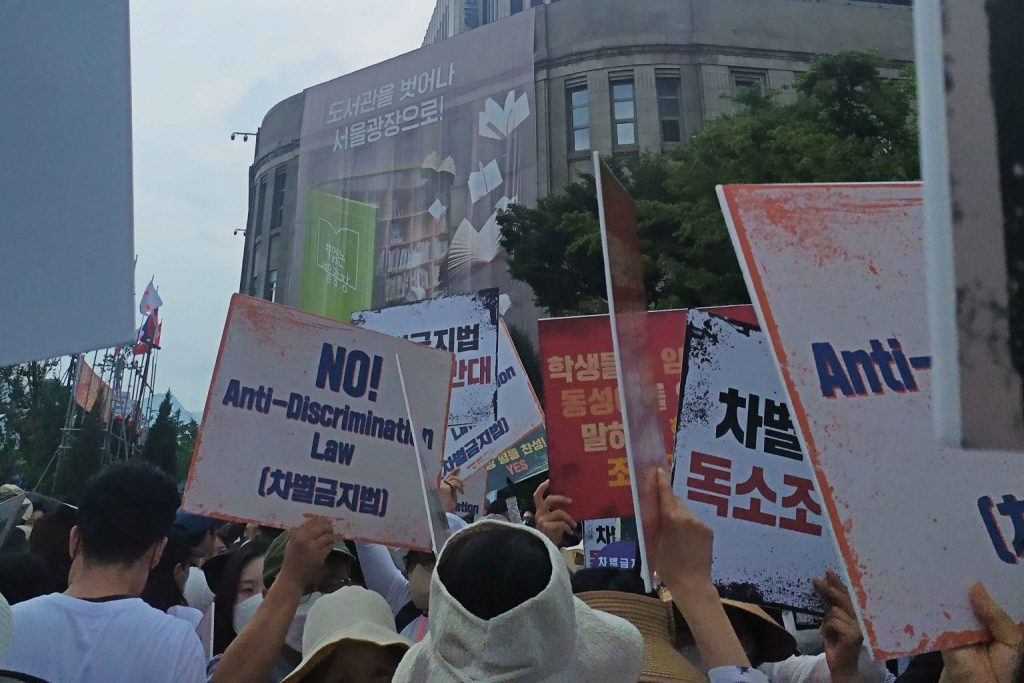 Surrounding this event, there were three major controversies. First, is the fact that it’s a gay event. Many Christian and Confucian groups oppose homosexual relations. Second, was the appointment of the allegedly gay Philip Goldberg, as the American ambassador to Korea. This led anti-American and anti-foreign groups to oppose the festival. And third, the proposal of an anti-discrimination law to protect women, queer people, foreigners, people with disabilities, etc. This led intersectional bigots to oppose the festival.

Naturally, a lot of misinformation became widespread about what pride is leading up to the event. In sum, I would say that more of the Korean public opposed pride occurring this year than supported it.

What Most Koreans Expected it to Be, and What Pride Was

However, in my opinion, the general public’s concerns were unfounded. There was no obscene content, or conversion occurring. I myself am straight, and didn’t feel any pressure to ‘become gay’. They welcomed straight allies at the festival. In fact, many people running booths at the festival did not gay themselves.

Additionally, this festival had less sexual behavior than any festival I’ve been to in Korea. I’ve been to multiple music festivals here, and have seen half-naked and making out. The most I saw was hand holding, and people wearing T-shirts with LGBTQ+ flags on them. For the most part, people were just dressed normally. They looked like any other person walking down the streets of Seoul. 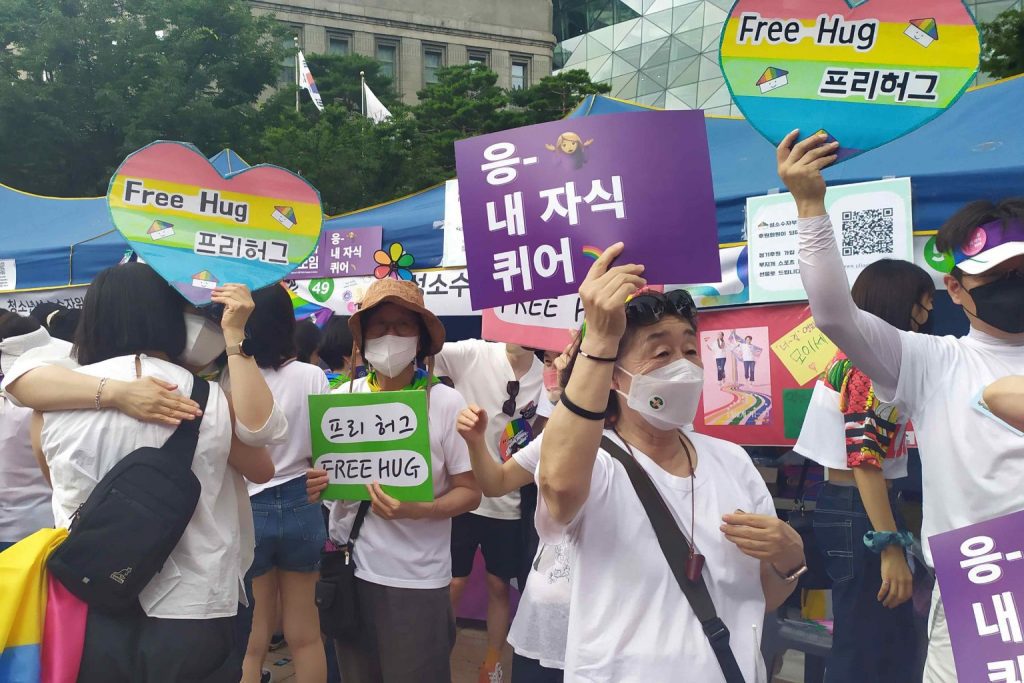 I believe that not only the festival itself but also the crowd it drew would surprise the average Korean. Most would expect a crowd of gay foreign men in their 20’s and 30’s, but that is not what I saw. There was an equal mix of masculine and feminine, people of all ages, and about a 70 to 80 percent Korean crowd. In fact, ajummas often get a bad rep among the foreign community, but they showed up in droves to show support.

Besides the festival going against opposer’s stereotypes, I also found my own stereotypes being broken.

In particular, I was pleasantly surprised by the presence of embassies, Korean political parties, religious organizations, and elderly Korean allies. Not only were they there, but they were also actually part of the queer culture festival and had official booths. 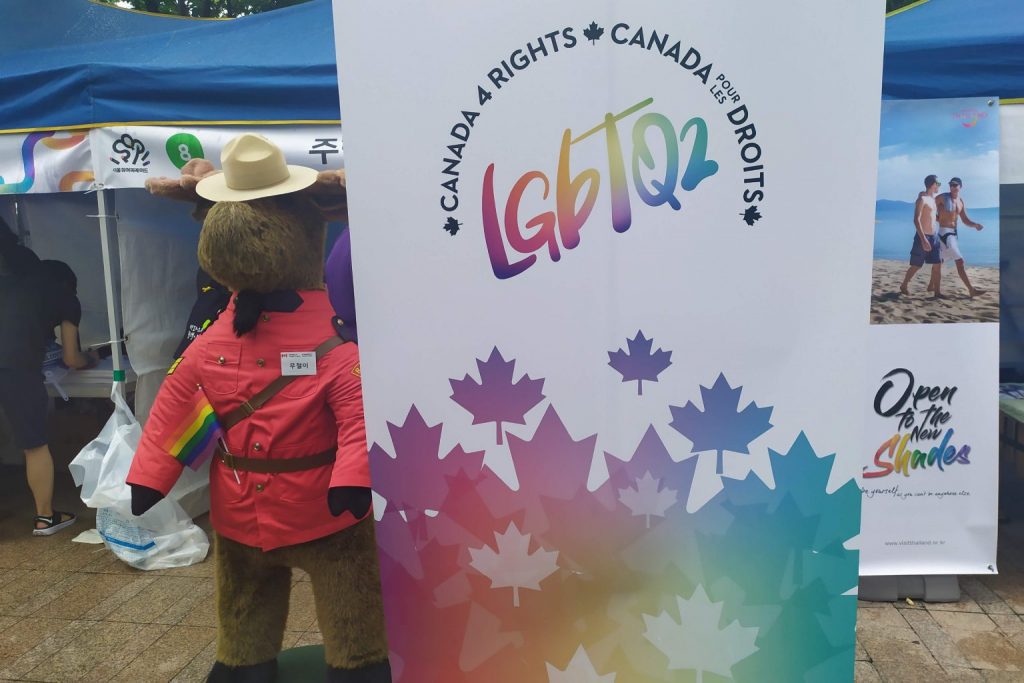 Many embassies from western countries. In particular, the Canadian and Australian embassies really went all out. Australia brought a giant pride Koala mascot. Canadia had a photo wall and a bunch of free merch. 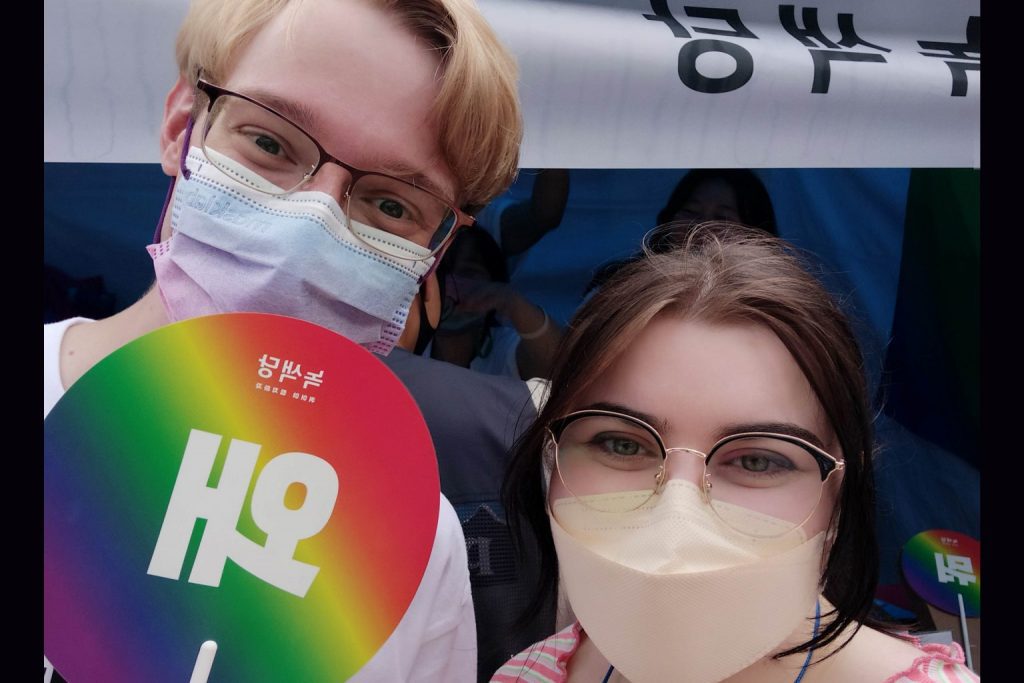 There were also a few Korean political parties that had booths at pride and a few politicians made appearances. I really enjoyed the Green Party’s booth. They gave out free temporary tattoos with catchy slogans such as ‘don’t melt the earth melt hate’. Plus, I finally got to meet Austin (bashore101) in person! He is a popular TikTocker in Korea, who makes political and legal content in English. 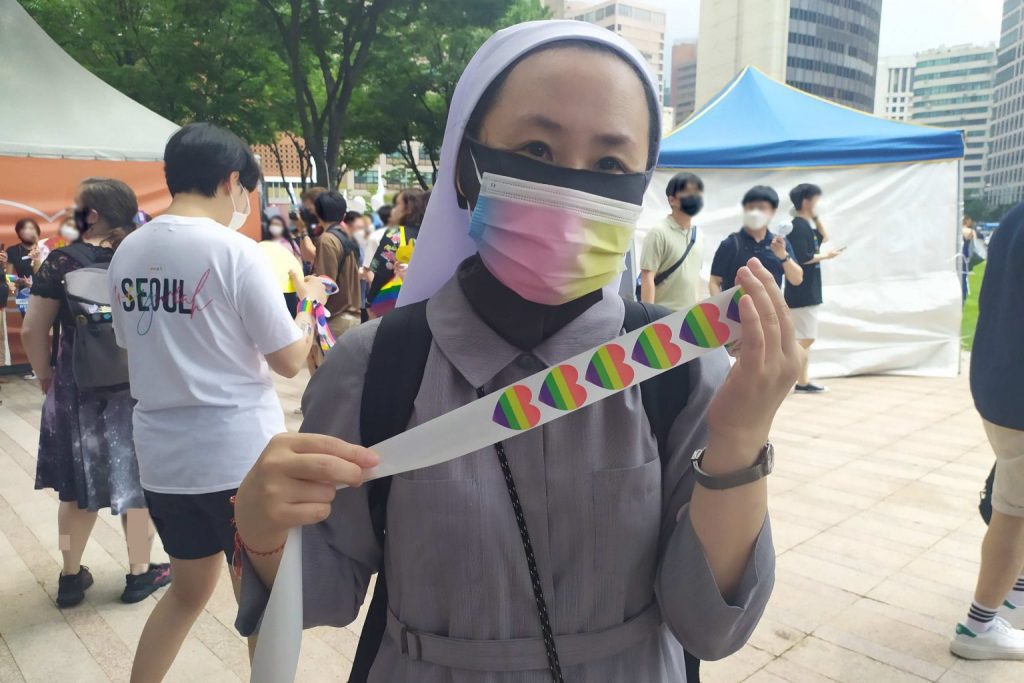 For religious groups, I was extremely surprised. Catholics, Protestants, and Buddhists had booths at the festival. I was given a rainbow heart sticker by a nun, and then immediately after a Buddhist monk tied a rainbow bracelet around my wrist, and a Christian wearing a rainbow T-shirt offered me a hug. 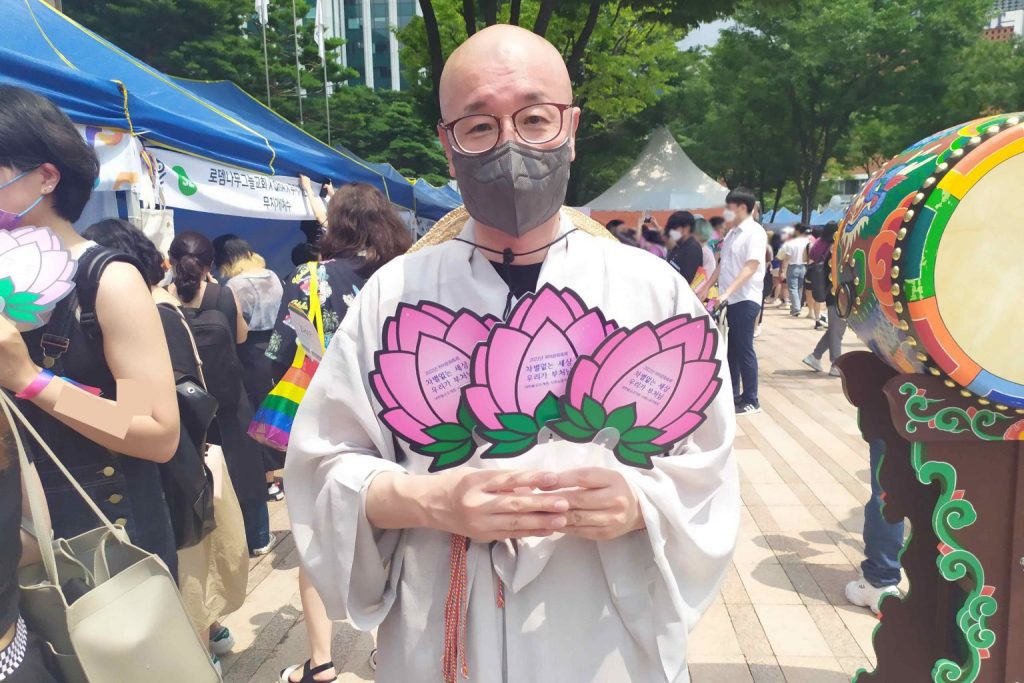 It was a touching experience, but nothing moved me as much as the group of middle-aged and elderly Korean allies at the Rainbow Mama Papa booth. They are an organization for parents and family members of queer people in Korea. So many people came with the organization to give out free hugs. I had to wait around 30 minutes before I had the opportunity to finally approach the booth and purchase a book.

Overall, the downpour that left me soaked as I went home was the perfect representation of how I felt about the festival. It was a refreshing cool down from the heat, but it was overwhelming. 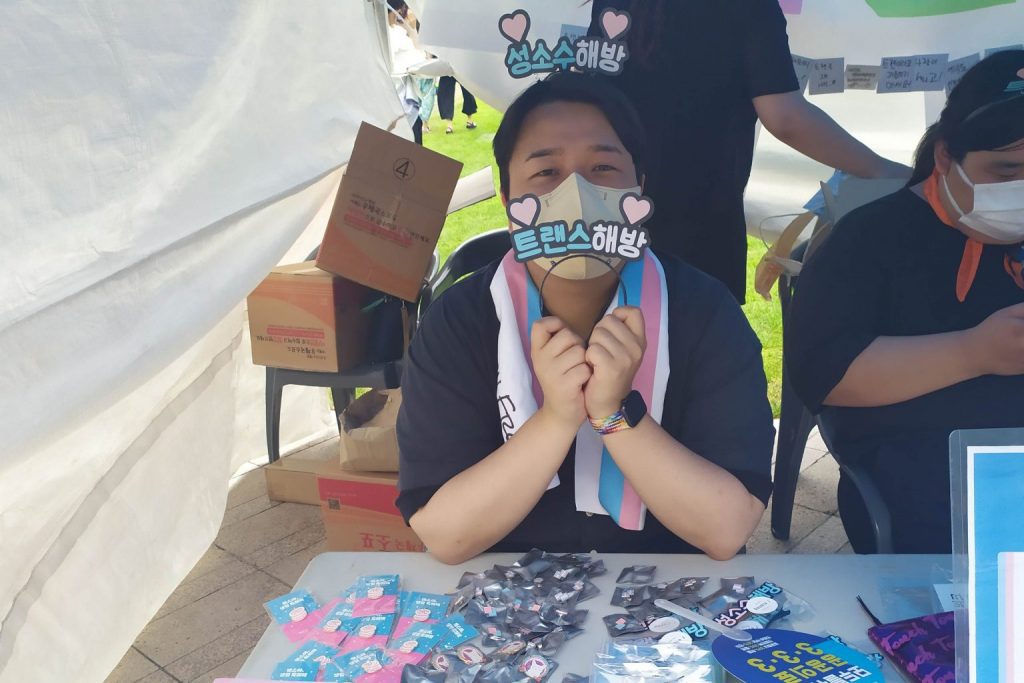 Most of the English reporting I’ve seen on Seoul Pride 2022 minimized the role of protesters. Instead, they showcased what a queer event in Korea meant for diversity and inclusion. However, I saw an island of love in an ocean of hate and was left with mixed feelings about how I should write this article.

On one hand, I feel like minimizing the reality of the level of protest I saw would be contributing to queerbaiting at the national level. Yes, Seoul has had pride festivals for years now. However, what I saw was an act of defiance, not a celebration of public acceptance. 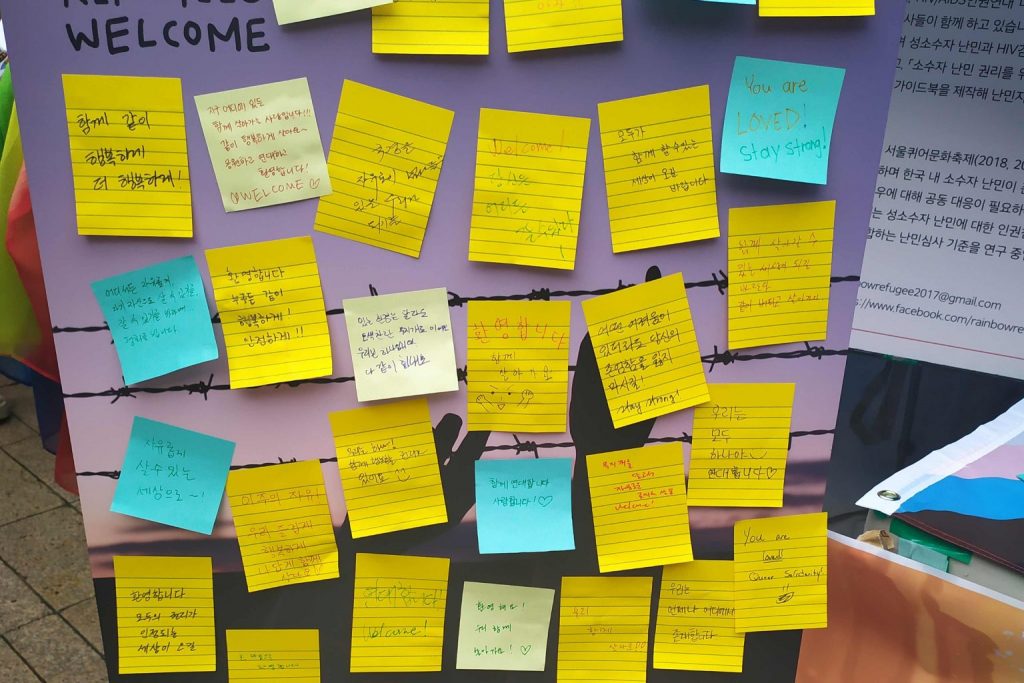 On the other hand, there really was so much love on that island and I wanted to show it. There are so many brave queer people and allies who are willing to go against the masses and show this community that they are loved.

I have faith that over time, the ocean will recede. One day, I hope that people in Korea can view queer relationships as I did when I was a child. Love shouldn’t be this controversial.

If you would like to know more about life in Korea as a member of the LGBTQ+ community, Click Here to read about life as a lesbian in Korea.