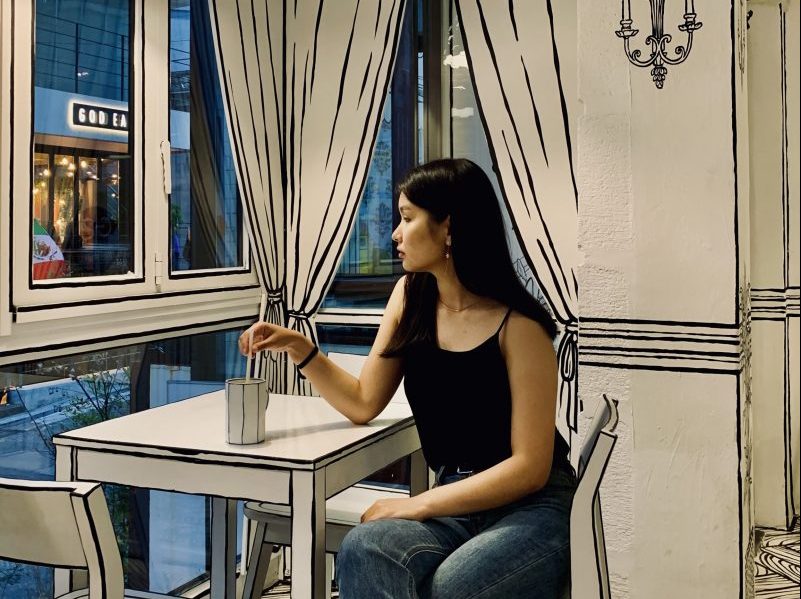 Hongdae can be interesting place to spend your weekend with friends. Because this place has a lot to offer for a fun weekend. If you are international student in Seoul who has been living here for almost 2-3 years and wondering where to spend weekend, then this blog can be helpful for you.

Check out: Things to do at Hongdae

Chicken with wine for lunch in Hongdae

While I arrived Hongdae with my friends, it was hard to choose a cafe for lunch among 100 cool dining restaurants. Some of them were overcrowded, some were expensive and some did not have the food we preferred. So, after walking around and searching about 20-30 minutes, we decided to go to the main Hongdae street. It is a street where you can usually enjoy live perform or have picnic. There we saw this interesting restaurant with simple name called Beef Pork Chicken Shrimp on the second floor. The big open windows of the restaurant made us feel more safe having food there, cause of the virus outbreak. Also we were very hungry and the obvious name that includes all delicious meat persuaded us easily.

We ordered chicken and fruit wine that cost 12,000 each person.

Originally chicken with beer or wine have become serious institutions in South Korea. Korean style fried chicken started showing up around 1970, when cooking oil became more affordable. In the 1980s and 1990s, chicken “hofs” that served deep fried chicken and beer popped up everywhere. This was likely due to early forced retirement for mid-level managers in Korea Inc.’s chaebol conglomerates. Chicken hofs were sold as turnkey business solutions. Since so many opened on every corner, Koreans started going to them because they were there. These days, there are more chicken franchise locations in Korea than there are McDonald’s in the entire world. 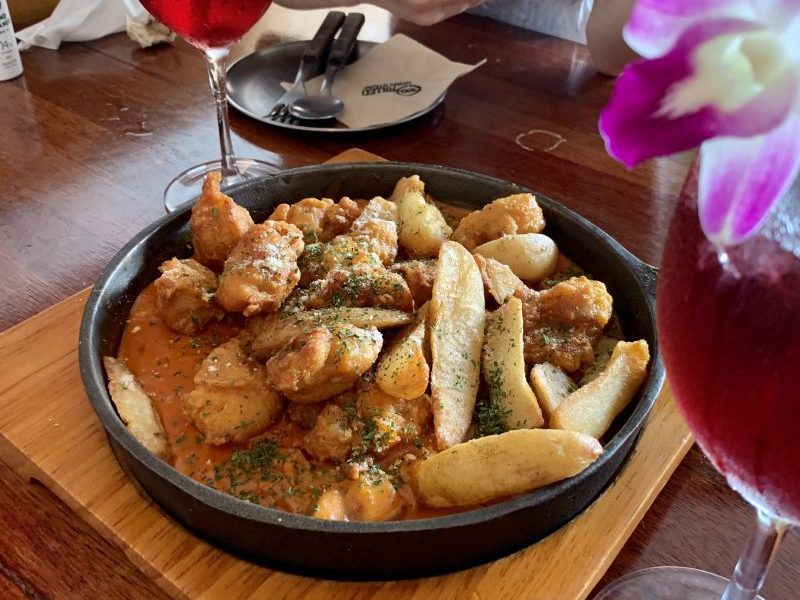 So, fried chicken, commonly known as just “치킨”  is one of the most popular dishes in South Korea. In fact, the popularity of Korean chicken is so widespread that fried chicken shops outnumber Subway and McDonald’s stores worldwide. KB Financial Group Economic Institute reports that there are around 87,000 chicken stores in Korea as of February 2019, while Subway has 43,000 and McDonalds 37,000 worldwide. 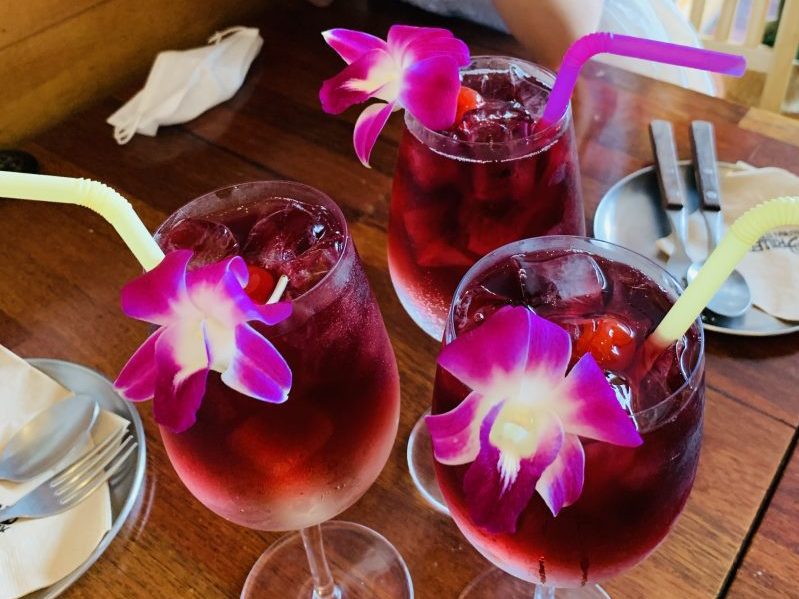 But there are a lot of versions of korean chicken except fried ones. Sweet, crispy, cheese snow or made in oven. We decided to order boneless chicken in curry souse with crispy potatoes. It went along very good with fruit cold wines.

Actually korean fried chicken or Chimaek has become a food phenomenal in South Korea. Chimaek 치맥 means 치 means chicken and 맥 means maekju, the Korean word for “beer”. Chicken and beer is considered a classic combination in Korea and one of the most popular choices when eating out. You can also get chimaek as take-out. However the combination of these two has become a culturally significant feature in South Korean drinking culture.While the consumption of the two has been around for decades, the term’s popularity soared during the 2010 World Cup when fans would enjoy chimaek as they watched games. 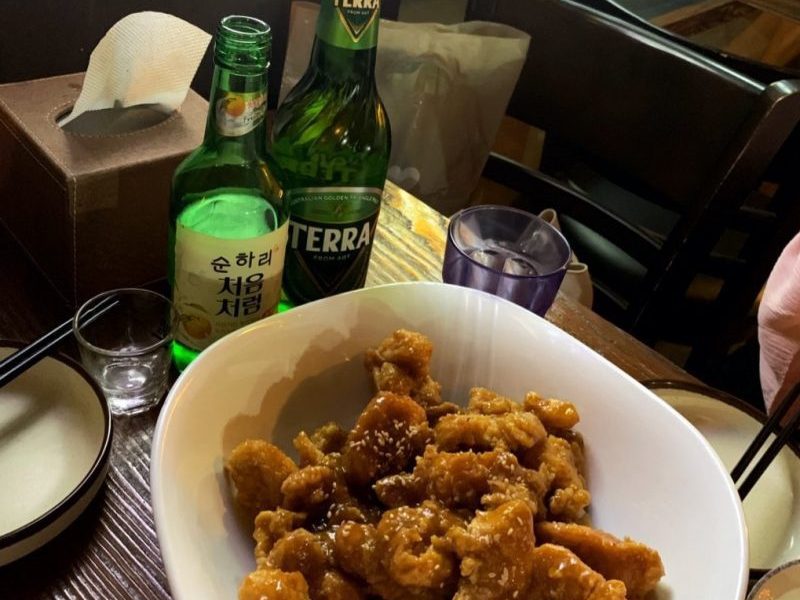 My favorite chimaek cafe is Kyochon Chicken 교촌치킨 on Hongdae. Kyochon is known as one of the best Korean Fried Chicken in South Korea. It is also famous cause actor Lee Min Ho was an ambassador of the brand.

The Kyochon Chicken chain is hugely famous in a lot of countries and there are a number of branches in Seoul. In Seoul Hongdae branch is popular among tourists and youths, also more convenient to get to.

The Kyochon Chicken restaurant has five types of fried chicken. They are honey, signature soy garlic, red, fried and salsal, which is salad with rice. Price is about 15,000 Won to 18,000 Won.

After delicious dinner the best thing to do is have a coffee. Hongdae offers numerous of unique and beautiful coffeeshops, so it will be easy to find one. We stopped by the coffeeshop called 연남동 223-14 or YEONNAM 239-20. 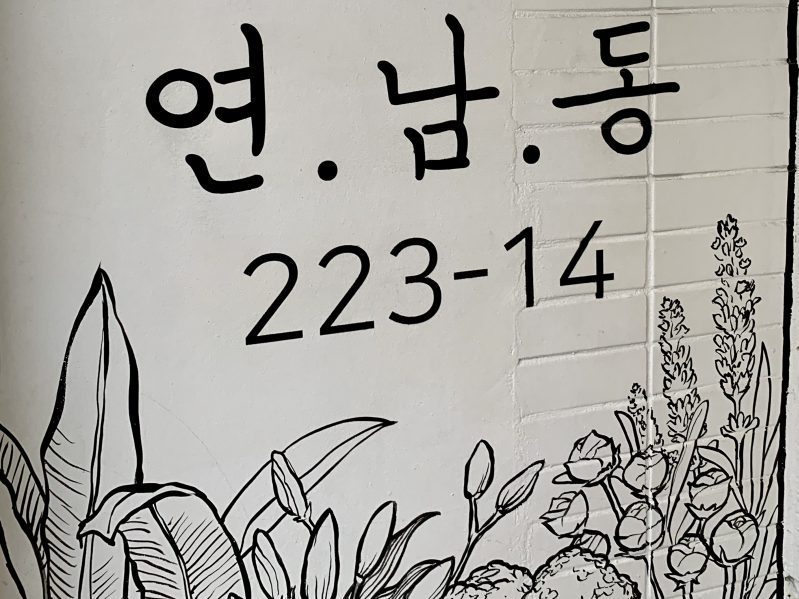 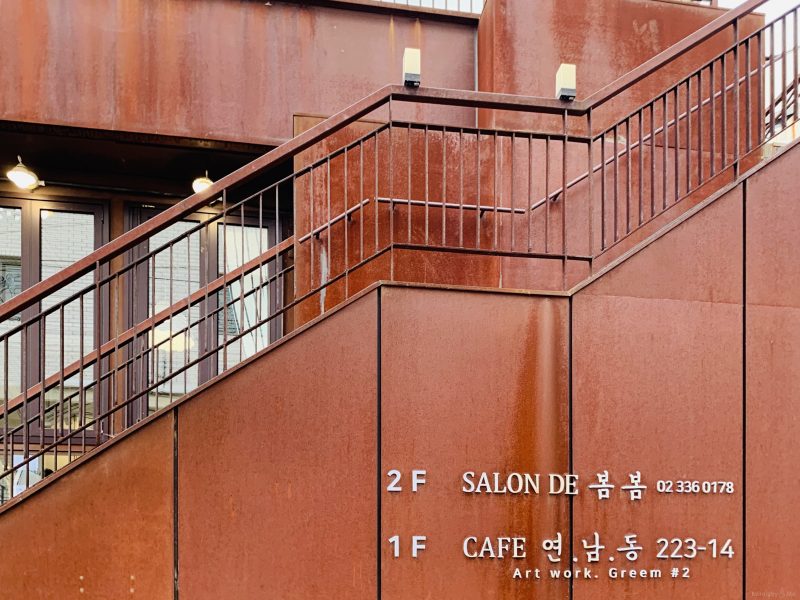 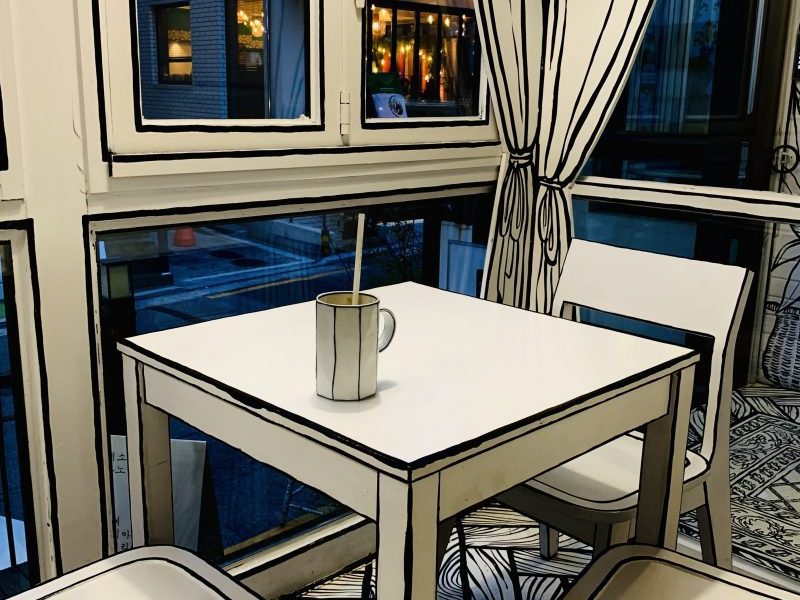 Cafe Yeonnam 233-20 is probably the most famous cafe in Seoul. It has become so popular it went viral everywhere. I remember first time I saw pictures of this cafe on russian social network platform VK many years ago. It seemed so unreal at that time cause of its black and white walls.This cafe is decorated to look like you are in a cartoon or illustration without color. It made me feel like I want to color every single things inside. 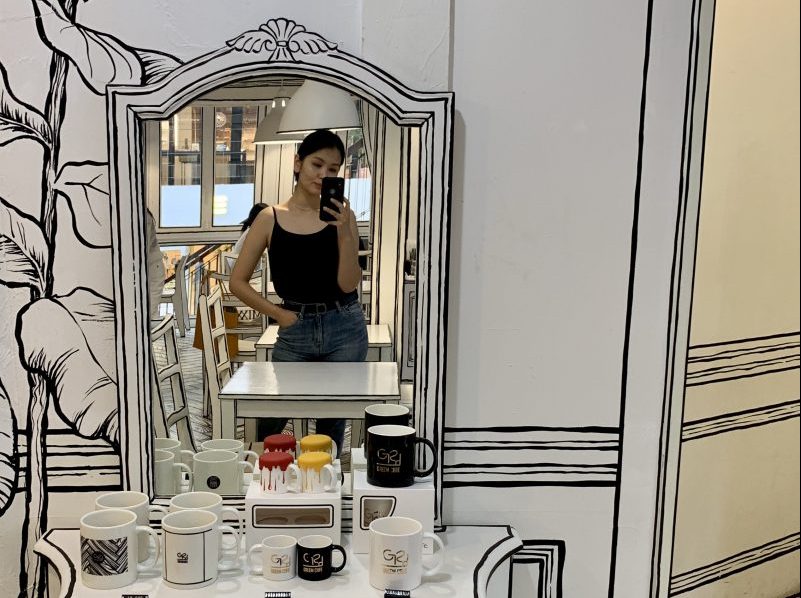 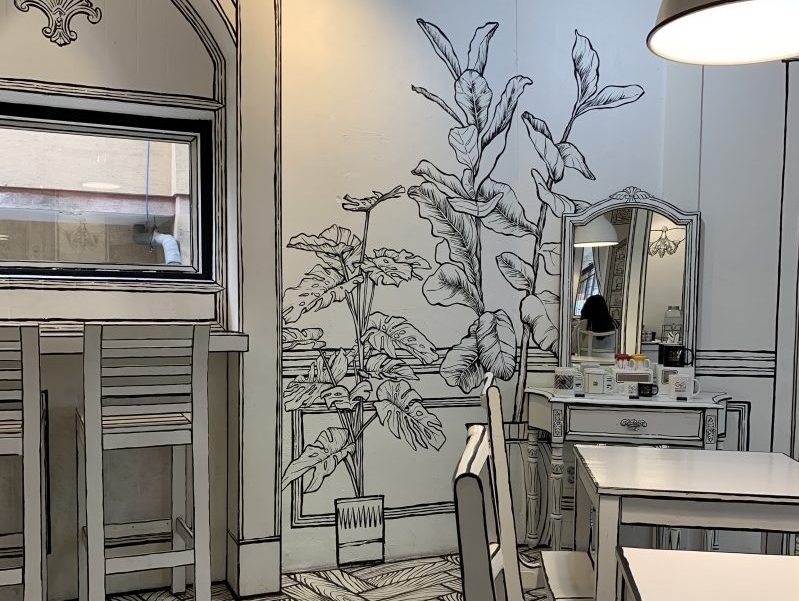 After finding a seat you can go to order a drink. There are a lot of  good beverages to choose from.The menu is Koran and in English. We ordered a Chocolate Latte, an Orange Latte and Toy Latte ( comes with sweet which looks like a little toy). All of them are are available hot or cold with ice and come served in the very pretty mug. My orange latte was delicious, it tasted like a sweet orange with some coffee in it. 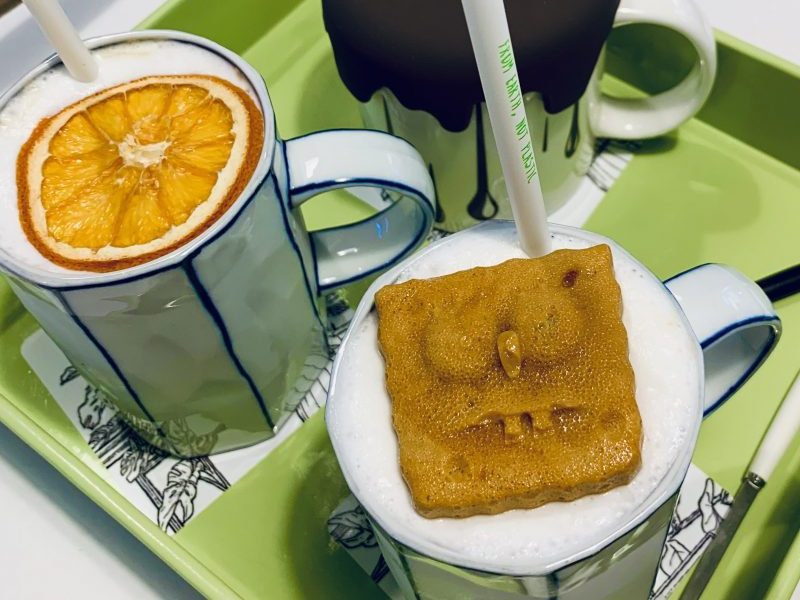 Discover North African Cuisine in Seo...
Hiking Trails in Daegu: 6 Mountains
Jazz up your home with these Indonesi...
Being a Spanish Teacher in Korea
For A Day Dining Cafe: True Bliss of ...
Korean Fall 2022 Trends: The Cardigan
6 FREE Ways to See Kpop Idols in Kore...
Where to Buy Crystals in Seoul: Cryst...
Total
844
Shares
Share 844
Tweet 0 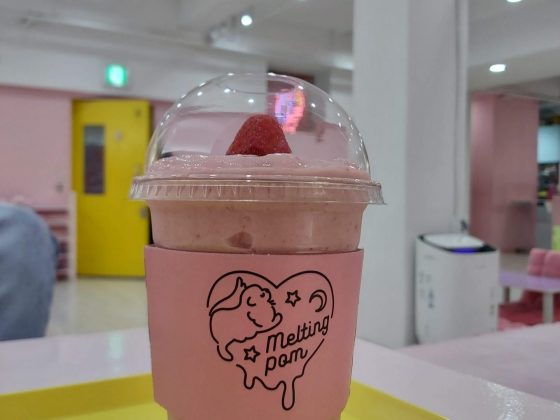 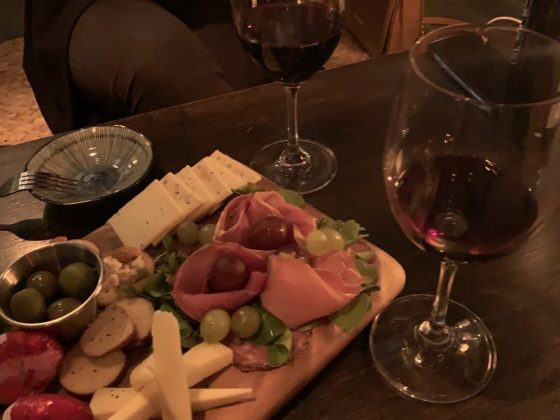