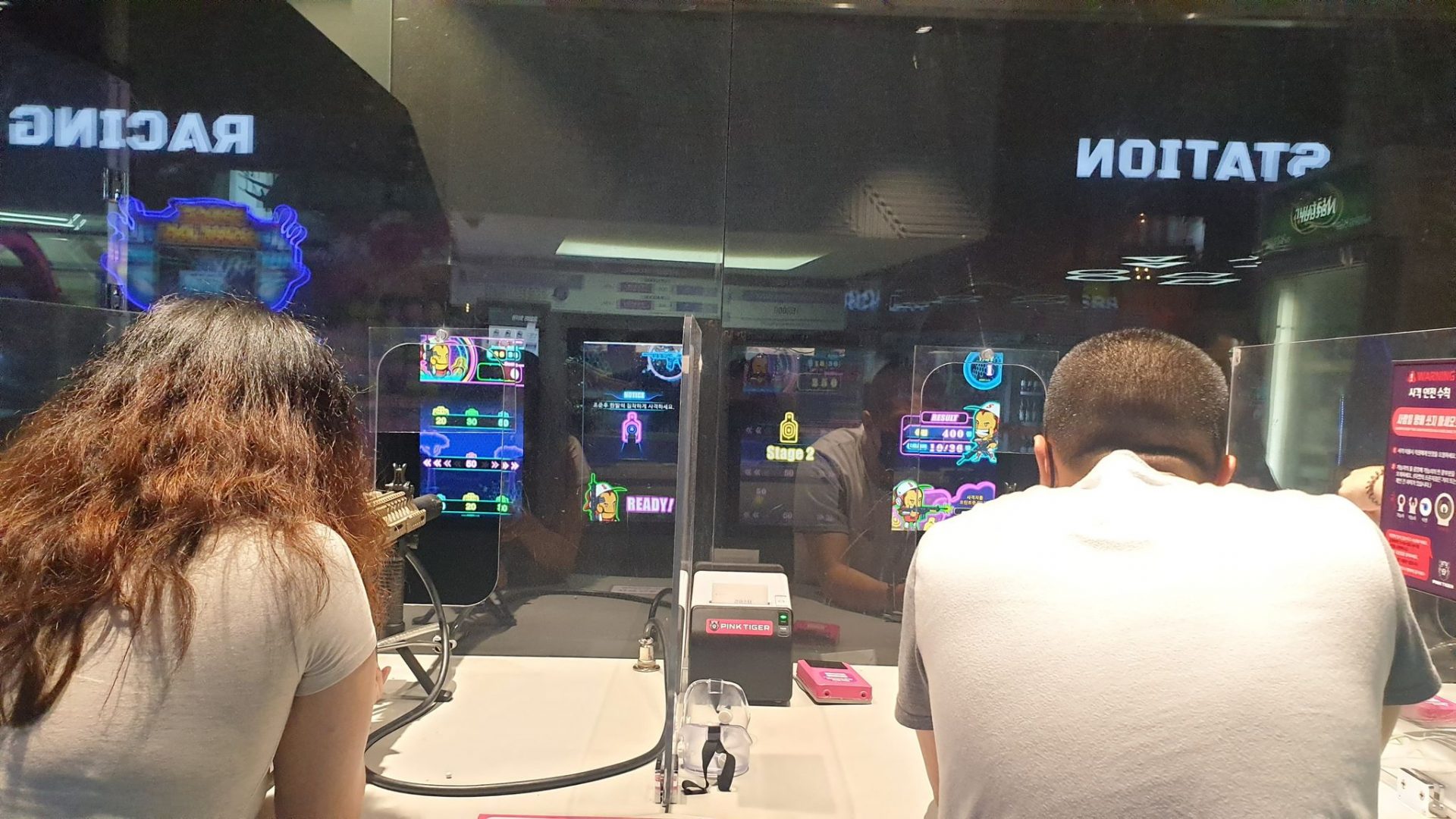 Have you ever been to a game arcade in South Korea? Game arcades are very common here. It is a favorite place of youngsters to hangout with friends or for families to spend some entertaining time together. It is even a popular choice for a date night. I had been to one, the Pink Tiger Game Arcade, and I totally enjoyed it. Pink Tiger is the hottest game zone in Pyeongtaek City. This multi-gaming facility has a wide variety of games including shooting, racing, basketball, screen football, screen baseball, bowling, darts, dance machine, VR and archery. They even have karaoke rooms. Furthermore, on the second floor are claw machines and numerous arcade games. Let me tell you about my amazing experience at Pink Tiger.

Pink Tiger is a multi-gaming facility located at Sosabeol Commercial District, Pyeongtaek. It is popular among families, young locals and foreign residents. The establishment has two floors. On the first floor they have the shooting range, archery, baseball, football, bowling, darts, VR and racing games. The second floor consists of basketball, claw machines and arcade machines. The karaoke rooms are also located on the upper floor. You can buy a pass that lets you play any game for a time period. You may also pay for individual games if you don’t want to get the unlimited pass. The best part is you can win prizes such as drinks, ice cream or a doll when you do well on certain games.

My Experience at Pink Tiger

I went to Seosabeol to have dinner together with two friends one Sunday night. After having our meal, we decided to hangout at Pink Tiger. It was my first time, however, my friends had been there before. The place had many costumers that night, yet, it was not crowded and there was quite a number of foreigners in sight. We decided to buy the 2 hour pass. One of my friends didn’t want to play so we only bought for two people.

The arcade had a cool vibe filled with bright neon lights from the game machines. I could hear various sounds from the machines and from excited players as well. They also have a bar inside where you can buy snacks, beer or non-alcoholic drinks. Their staff were very friendly too. On top of that, they can speak very good English so we never had difficulty communicating. What’s more, they allowed my friend who did not buy the pass to play a few games with us.

We played almost every game on the first floor like shooting, baseball, archery, bowling, VR and racing. I personally enjoyed the racing and shooting games. Luckily, we won some ice cream for getting good scores in shooting. Everyone also had a good laugh watching my friend play the standing virtual reality game. After trying the games on the first floor, we headed to the second floor where we played basketball and a lot of arcade machine games.

To sum it up, I and my friends had a blast at Pink Tiger. Children and adults alike will surely have a wonderful time here.

The pass lets you play unlimited games for 1 or 2 hours. This includes bowling, archery, VR, baseball, basketball, racing, shooting, karaoke and most of the arcade machine games. However, it does not include prize games, hummer racing, dart, photo box and fishing game. Still, you can win prizes from archery, baseball and shooting when you get high scores.

I highly recommend you get the 2 hour pass instead of the 1 hour. A couple of hours playing will be more worth your money since there is plenty of games you can play. Trying out each game is more fun too. Time passes by so quickly when you are immersed in the games that you don’t even notice it.

If you do not want to get the unlimited pass, you may pay separately for each game.

From Pyeongtaek Station (AK Plaza) take bus no. 5, 6-1 – Get off at Central Dome bus stop (about 15 minutes ride) – walk towards Pink Tiger

From Pyeongtaek Station (AK Plaza) take bus no. 888A – Get off at Sosabeol Jungsim Sangga (CGV Pyeongtaek) bus stop (about 25 minutes ride) – walk toward Pink Tiger

From Pyeongtaek Bus Terminal take bus no. 888B – Get off at Central Dome bus stop (about 24 minutes ride) – walk towards Pink Tiger