Pre-pandemic, Myeongdong Shopping Street was a shopping and food paradise. It was recognized as the ultimate shopping destination for visitors to Korea. However, going into the third year of the pandemic, Myeongdong is dead. Its once-bustling streets are quiet. Shops have either been transformed or abandoned completely. 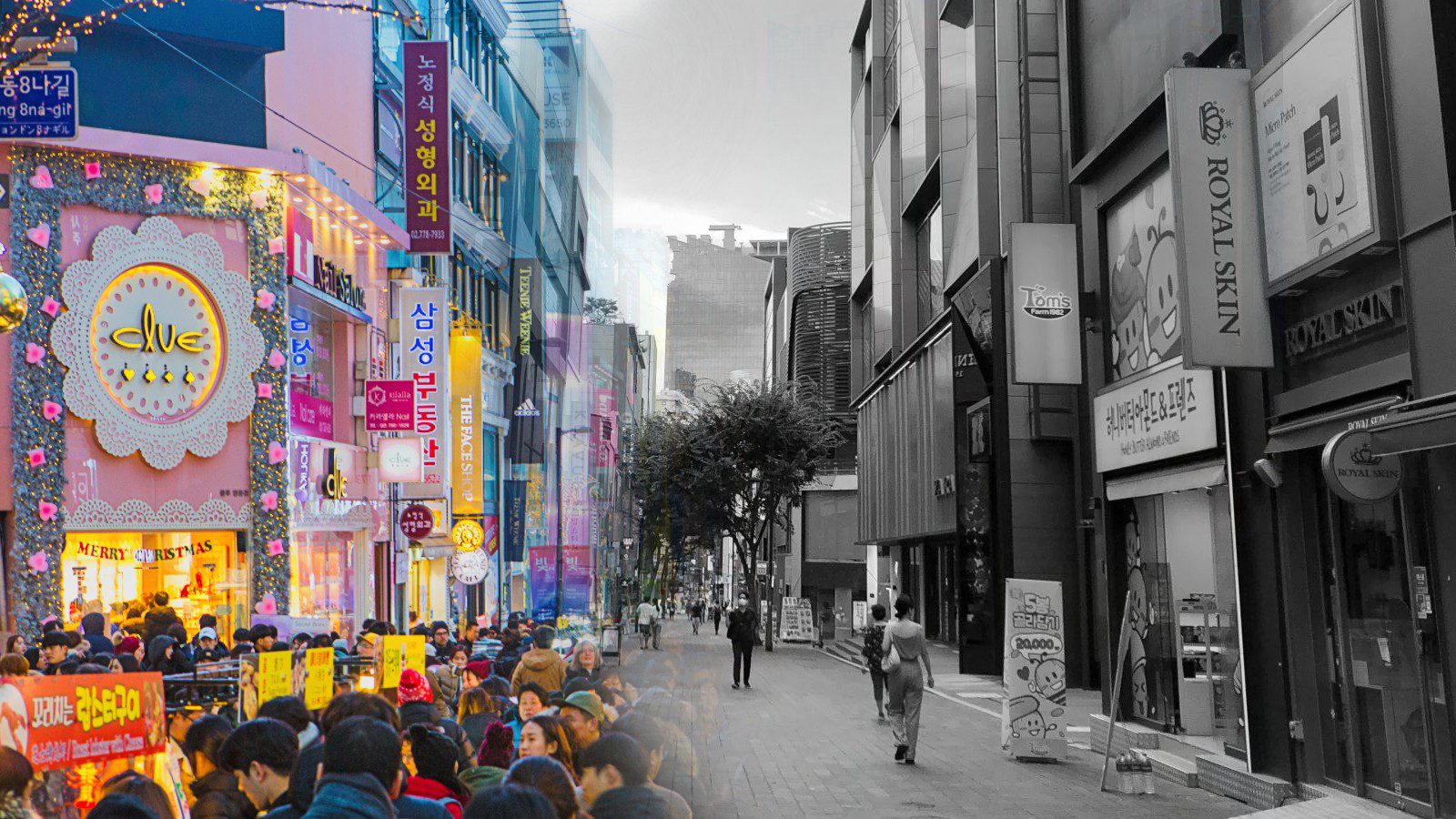 Walking along the main street, I could see stores overflowing with merchandise. Both Korean and domestic brands lined the streets on either side – Bean Pole, SPAO, Stylenanda, UNIQLO, Adidas, Nike, H&M, New Balance, and FILA were all present. While the official stores had storefronts on the main street, knock-offs of virtually any brand imaginable could be found in Myeongdong’s back alleyways and basements.

I still distinctly remember the underground shopping center, full of shops. Most of which were selling K-pop merch and collectibles such as albums, socks, stickers, lightsticks, and posters. Day or night, Myeongdong was full of people.

Myeongdong was a place where you could go and shop 24Hrs a day. It was always very crowded, especially in stores selling Korean beauty products. Brands such as Innisfree, Missha, Nature Republic, Etude House, Laneige, The Face Shop, Mamonde, Tony Moly,  and The Saem opened multiple shops all right next to each other. Even though the same brand had three or four shops on the same street, each one was so crowded and you’d have to fight your way through crowds to get to the checkout.

Then there was the night market. The street used to be full of push-carts selling different kinds of Korean street foods. Myeongdong has been a destination for foodies since at least the 1930s. Many of Korea’s iconic street foods, such as Korean-style dumplings (mandu) and Hotteok are said to have originated and been popularized in the district. For nearly 100 years, people used to have fun and safely enjoy food along Myeongdong’s main streets.

We are now going on three years since the pandemic started. Many establishments – stores, restaurants, and other small businesses stop their operations off-and-on throughout the past few years. However, nowhere in Korea has suffered quite like Myeongdong. Pre-pandemic, Myeongdong gained a reputation for both being overcrowded and hosting mostly Chinese immigrants.

As a result, even before Korea reported its first case, Myeongdong was dead. In the early days of the pandemic, Myeongdong was number-one on everyone’s list of places to avoid. Ironically, it was one of the last districts in Seoul to report any cases. 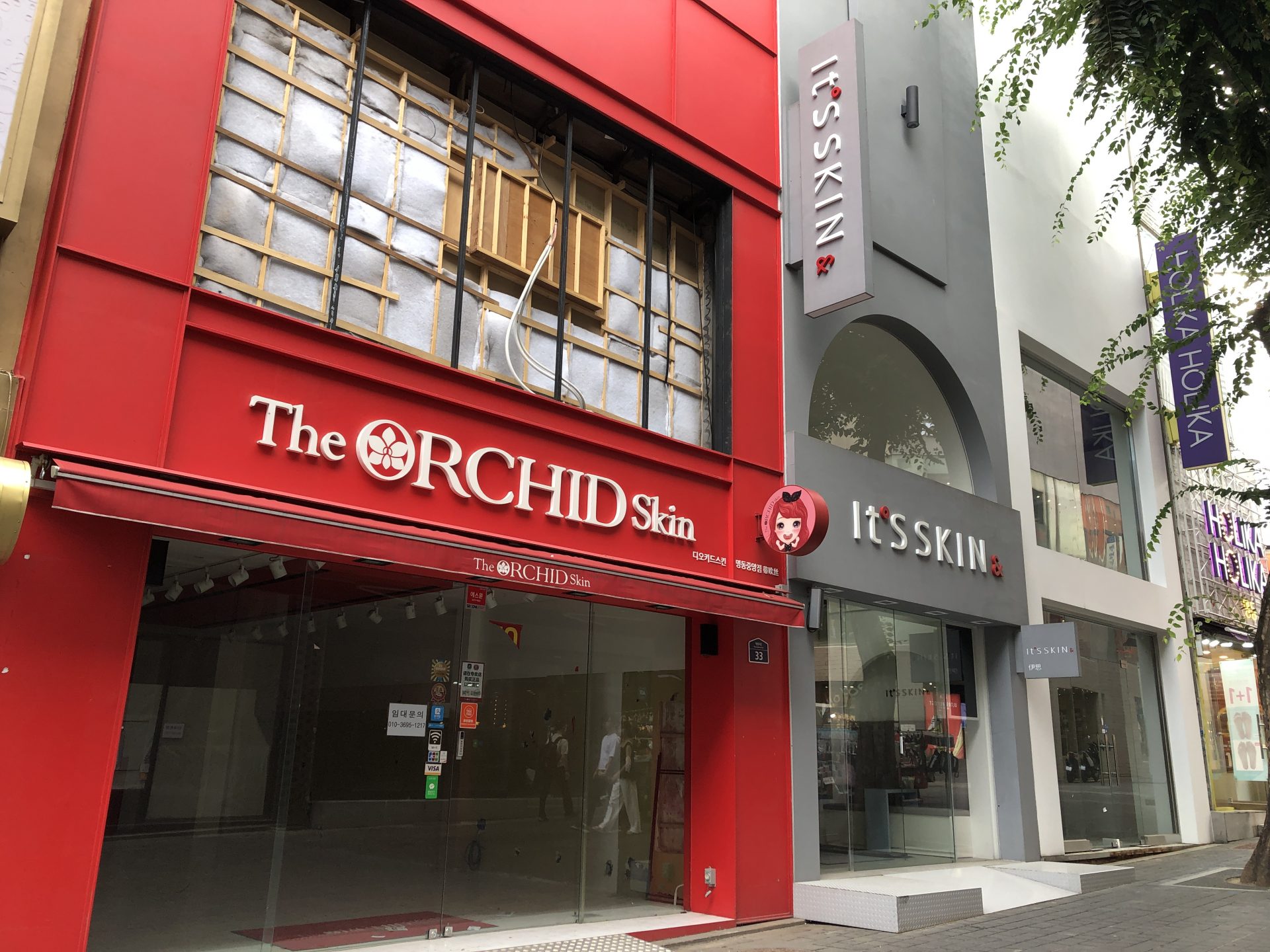 Unfortunately, the avoidance of Myeongdong continued. Without revenue from tourists, most of the district’s fashion and cosmetics stores are now closed and many buildings stand abandoned. When I visited the area, I felt sad and disappointed. But, the street was also peaceful and beautiful in a haunting sort of way.

The same goes for the underground shopping center. The once-bustling K-pop merch shops, clothing, and beauty stores are all closed now. Also, I am sad to say that there was only one lone street-food cart. The street-food market is not a nightly occurrence anymore. Honestly, I miss the old Myeongdong Shopping Street where I could shop freely and safely, disappearing into the crowd.

I’m not sure if Myeongdong will ever return to what it was before. However, one thing is for sure, Myeongdong has survived worse. 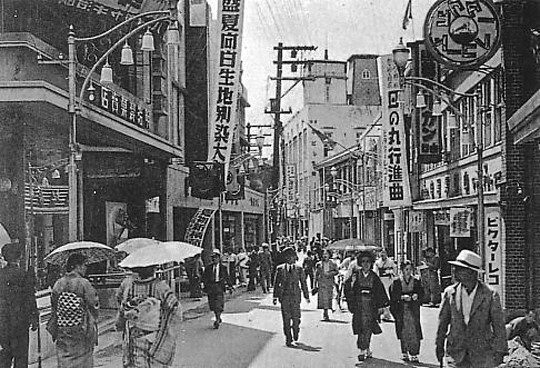 Myeongdong was once a residential district, but with the Japanese invasion, occupants were forced to leave their homes and it was converted into a shopping district. As a symbol of Japanese wealth at the center of Seoul, Myeongdong was completely destroyed after Korea’s liberation and the Korean war that followed.

Despite its history, Myeongdong was one of Seoul’s most profitable and developed districts in 2019. Given time, it will undoubtedly transform again into an epicenter of Korean culture and tourism. This transformation may have already begun.

Now that tourists are gone and a new atmosphere is taking hold, new businesses have begun to emerge. Many of the clothing and cosmetic stores have converted into cafes. Street food and department stores have been replaced by restaurants. It is still difficult to say exactly which industries Myeongdong will be known for next. Its easy to come to the conclusion – Myeongdong is dead. However, I don’t think its dead yet, it’s just changing into something new.

One place in Myeongdong that has survived is Stylenanda’s Pink Hotel and Cafe! To read more about it >>Click Here<<