If you’ve found yourself hanging out with Korean friends recently, there is one question that’s bound to make its way into the conversation. What is your MBTI? The psychological assessment designed by Meyers Briggs has become THE single most talked about thing in Korea. The MBTI is now at the core of everyday social life in South Korea.

Korea is a country that is all about saving time. And so, the MBTI has become the most efficient way to get to know someone. The MBTI is simple. After taking an online assessment, people are classified into one of 16 personality types.

There are 4 basic aspects of personality that are assessed. Each with two options. The first personality aspect that is measured is ‘Favorite World’. You can either test as dominantly introverted (I) or Extroverted (E). The second category is ‘information. You can test as Sensing (S) or Intuitive (I). Then, there is how you make decisions, which can be classified as Thinking (T) or Feeling (F). Finally, ‘Structure’ results are classified as Judging (J) or Perceiving (P).

After taking a lengthy online assessment, (Click Here to try it for yourself) you will be assigned a 4 letter personality. Each personality has relationship styles, personality traits, and workplace habits.

This is not the first personality type trend to hit Korea. For many years, since Japanese colonialism, blood type was huge in Korea. Before the MBTI, it was common for people to openly talk about blood type in relation to personality.

Just like the MBTI, each blood type was associated with personality traits. These traits affected your relationships and workplace habits. However, unlike MBTI, blood type is was genetic and far more pre-determined.

For the most part, MBTI is replacing Korea’s fascination with blood types.

MBTI is now the first thing you learn about someone along with their name. It is not uncommon to see Koreans have their MBTIs included in their Instagram profiles. This goes for everyone – from influencers to your classmates.

From a foreigner’s point of view, having your MBTI so closely tied to identity seemed a little strange at first. However, when I considered my own country’s fascination with zodiac signs, it seemed less alien. Whether its blood type, zodiac signs, or, MBTI – most cultures have some equivalent. It’s an easy way to break some ice and begin feeling comfortable around strangers.

Korea is a country where it can be hard to get to know new people. Traditionally, people were separated into different social classes by age and rank. However, a lot of that is starting to change. By using personality types, people are able to feel like they already know someone moments after meeting them. Additionally, meeting people with the same MBTI creates an instant connection. Immediately, people can feel as if they’ve met someone who understands them.

If you use dating apps in Korea, you might see that most people have mentioned their personality types in their profiles. The purpose of this is to find partners with similar values. And, often people will have a personality or two blacklisted.

There are even a few Korean dating apps, which are entirely based on MBTI or have MBTI features. On these apps, only those who have a compatible personality will be available as matches.

While some companies have you take personality tests as part of the application process to ensure you will fit with their team, some advertise positions exclusively for those personality traits. 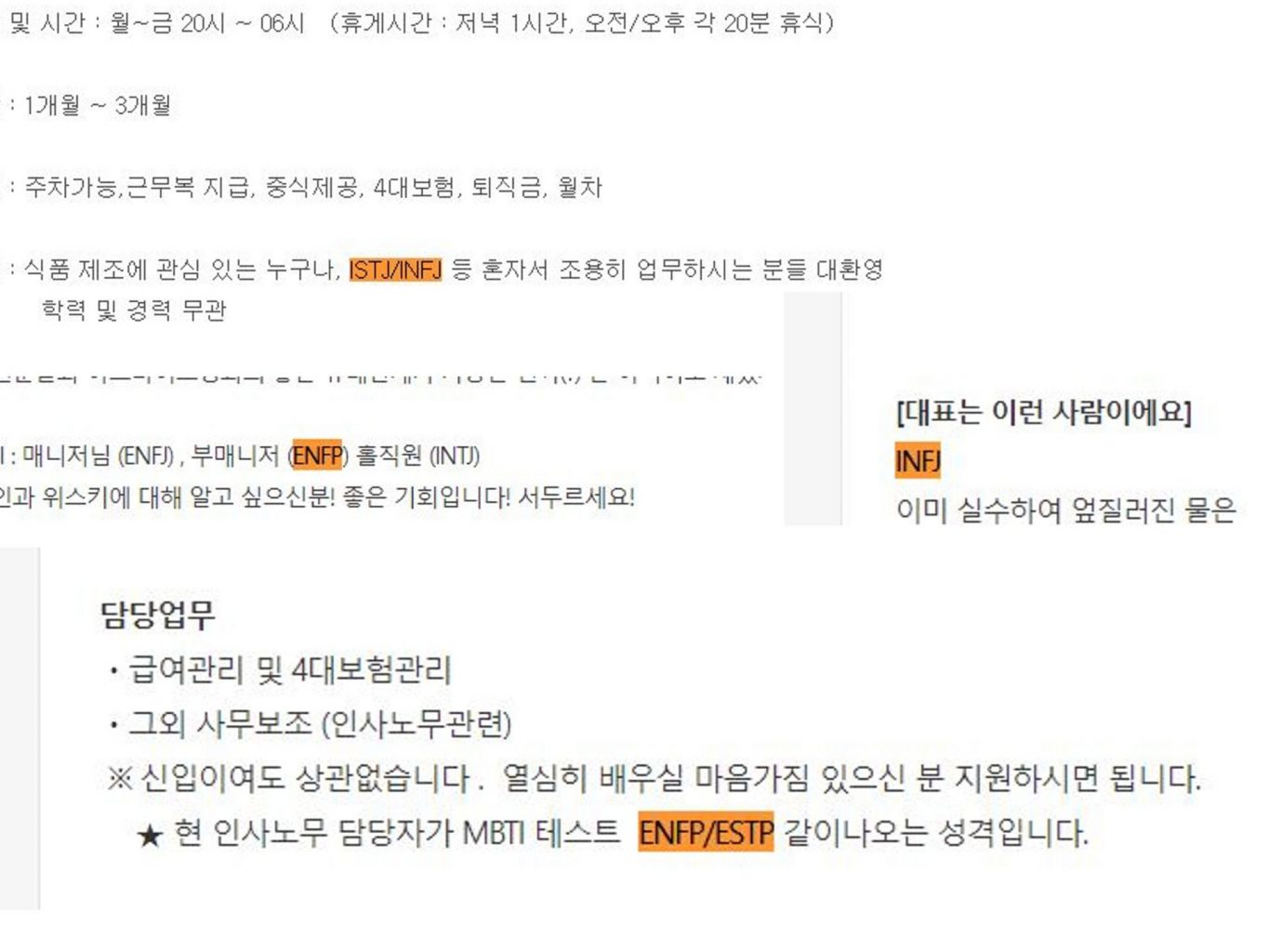 I’m not kidding – there are job applications that list an MBTI type under the job requirements. Some even go so far as to ask that you attach a screenshot of recent MBTI test results in your application to prove you fulfill the personality requirements.

In my option, while personality types are fun, they may be taken too far in Korea. When you are asked about your personality in interviews and on job applications it can turn into a form of discrimination. While you can use the MBTI to get to know someone, you are also judging that person with a small amount of information that may not be very accurate.

The Meyer’s Briggs test was created as a psychological assessment tool. Even Katherine Briggs and Isabel Meyers, the inventors of the test, did not believe it was totally accurate. Plus, the MBTI is not administered by a psychologist. We just take the test online.

Remember that people are complex. It’s important to judge people as a whole and not just by a few letters.