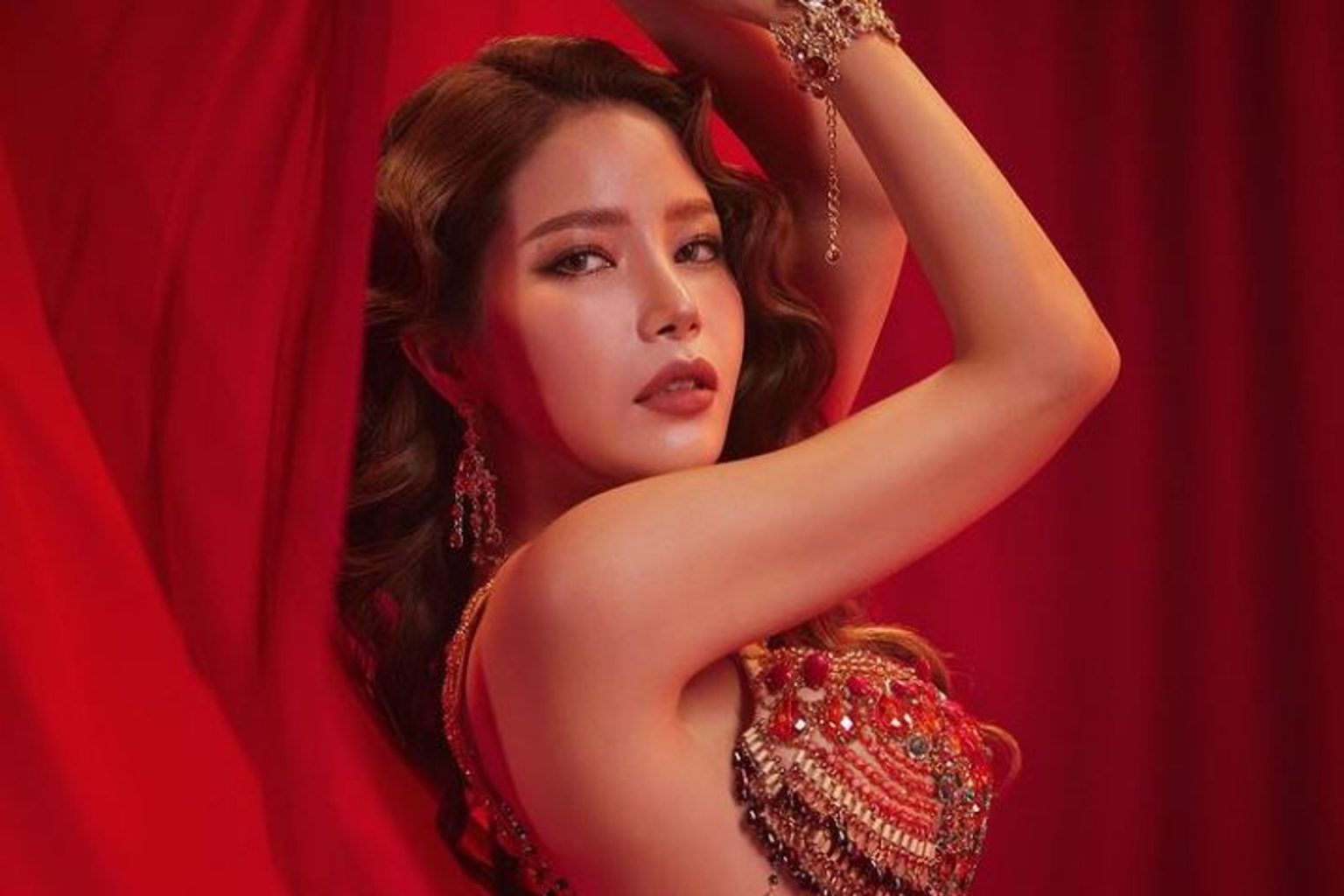 Mata Hari is a fantastic musical. However, in Seoul, you not only get the chance to see the world-famous musical in person, but you may also get the chance to see your favorite idol perform. Among the A-list cast, Mamamoo’s Solar plays the lead role of Mata Hari while Lee Hong-gi (F.T. Island) and Lee Chang-sub (BtoB) play Armand on alternating nights.

I usually like musicals, and this one was no different. The musical Mata Hari gave me goosebumps all the way until the end. The duration of the musical, the cast, the story, and the songs all made the price of the ticket completely worth it. This was one of my best experiences in Korea, and I found it out about it through being a fan of the main actress.

Being a fan of Mamamoo, I decided to go watch Mata Hari for the chance to see Solar perform (playing Mata Hari). But the whole cast was incredible. I would highly recommend this musical even if you aren’t a fan of the idols performing in it.

Mata Hari is based on a true story of a woman who was executed in 1917, as a German Spy even though she was innocent. In 1954 her decapitated head was to be part of the morbid collection at the Musée d’Anatomie de Paris. A final insult to a woman who was still the world’s most notorious femme fatale even decades after her death. But before the museum could unveil the head of Mata Hari, it was stolen from its display case.

The musical begins with an old man remains alone in the museum. He stands in front of the display case that was to hold the head of the only woman he ever loved.

His memory of Mata takes us back to 1905, when she first arrived in Paris, after fleeing from an abusive husband. With the help of Anna, a seamstress, Mata introduces the dances she learned in the Dutch East Indies (Indonesia) to Parisian society. She soon becomes an international sensation as both performer and courtesan.

One evening, while walking along the Seine, Mata hears a young man calling out for help. She rescues Armand, a pilot who jumped into the river when his plane caught fire. The two embark on a fairytale romance until George Ladoux, head of the French intelligence agency, becomes obsessed with Mata.

He recruits her as a spy for France and sends Armand off on a dangerous mission in the hope he won’t return. When Mata learns that Armand’s plane was shot down and he’s been taken prisoner by the Germans, she defies Ladoux’s orders and travels to Berlin under her original name; Margaret Zelle.

Ladoux is enraged when he discovers her betrayal. When the Germans learn she entered the country under an assumed identity, they conclude that Mata is a spy for France. They decide to name her as a German spy so the French will think she’s a double agent. Ladoux buys into the German’s accusations and the penalty is death by firing squad.

Armand makes his way back to Paris from the hospital in Berlin to try to rescue Mata. But, in the end, Mata Hari could not be saved.

They have a group of two casts. So if you are like me, and are going to see one specific actor or actress, be sure to check the casting schedule before buying a ticket. You can check the cast for each night on the Casting Information (캐스팅정보) tab on the website where you purchase your tickets.

The characters revolve around Mata Hari (real name being Margaret), the main woman, and a sensual dancer from Indonesia. Armand, a plane pilot of the French Army, who falls in love with the protagonist. Ladoux, a colonel of the French Intelligence Agency, who struggles between his ambitions and his desire for Mata Hari. And Anna, a mother figure to Mata Hari.

Throughout the play, we also have the constant presence of two more characters. The singer satirizes society, and the dancing figure, Margaretha, represents Margaret’s ego.

The musical started in mid-June and has been going on about 8 times a week. They have shows on most days except Mondays. You can check the dates at the Interpark website (here). The last day of the play is August 15th.

Note: Throughout the duration of the musical, the Angel-In-Us in front of the theater and inside the venue is also selling a set with Americano and Ham Sandwich for 7,500 Won, and a combo of strawberry smoothie and ade for 10,000 Won.

There are a couple of ways in which you can buy the tickets. Either through the Interpark website (both Korean and English websites are available), or Melon (also the English and the Korean websites are possible for purchase). 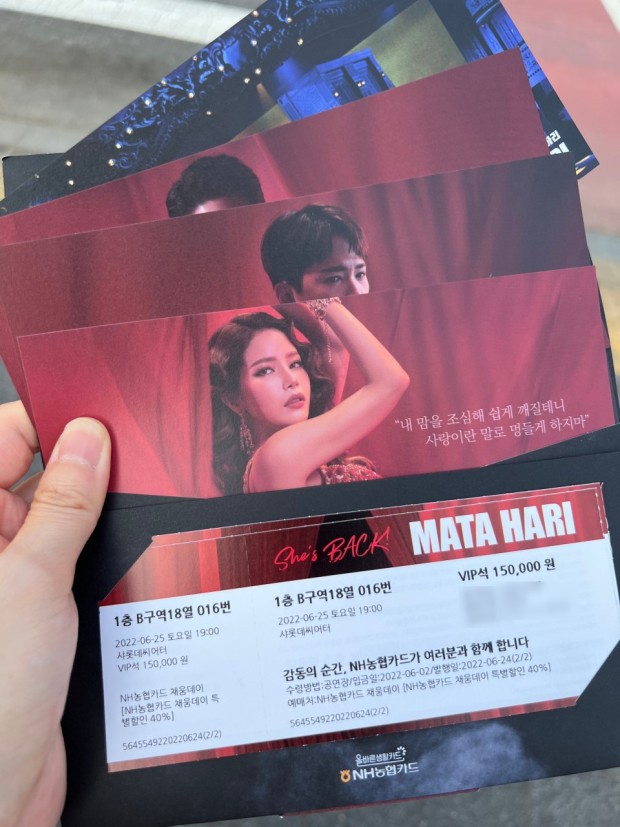 Here are the websites where you can purchase your tickets:

Once bought, you can easily collect your ticket in person at the ticket booth in front of the theatre.

The Musical Mata Hari is happening at Charlotte Theater, by Lotte World, in Seoul.

At the theatre, they also have a small gift store where they sell merch from the musical. I bought a program book for 12,000 Won. You can also find miscellaneous items, lyrics books, and pins. 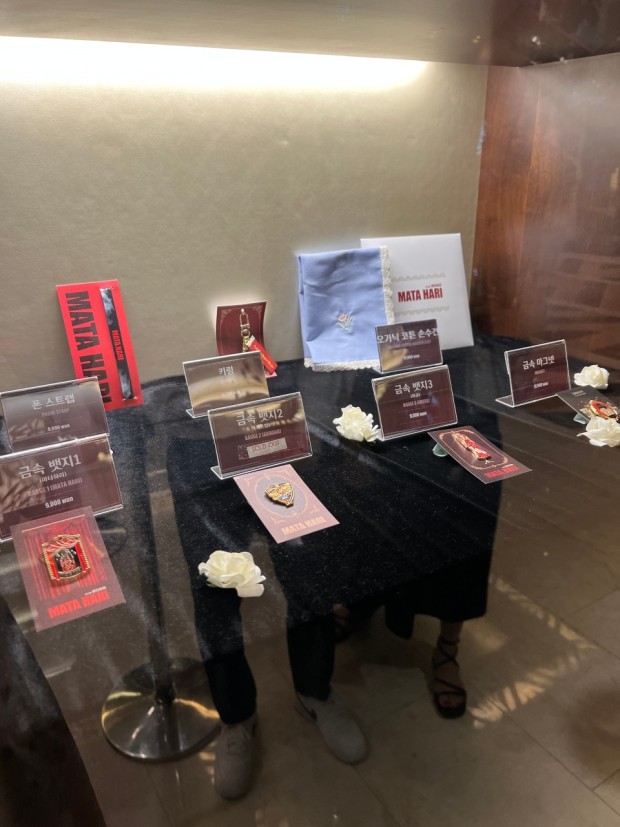 I could not be happier with watching the musical. I do believe it was a great way to see one of my favorite singers. Normally she is part of a group, but in this performance I got to see her center stage, using her talents to the fullest. Plus, I really enjoyed the stories and was introduced to so many other equally amazing talents.

The Musical Mata Hari became one of my favorite musicals, and while there is still time, you should definitely watch it too.

Check out other activities to do in South Korea at KoreaByMe. 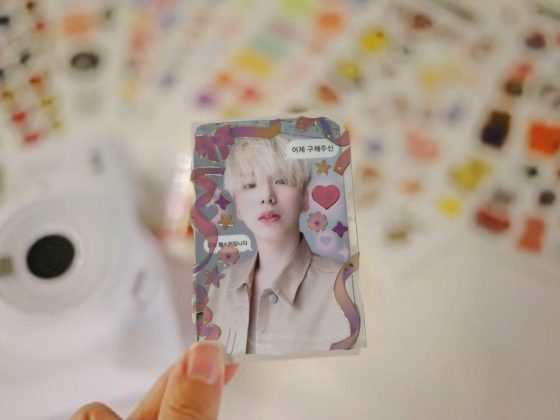 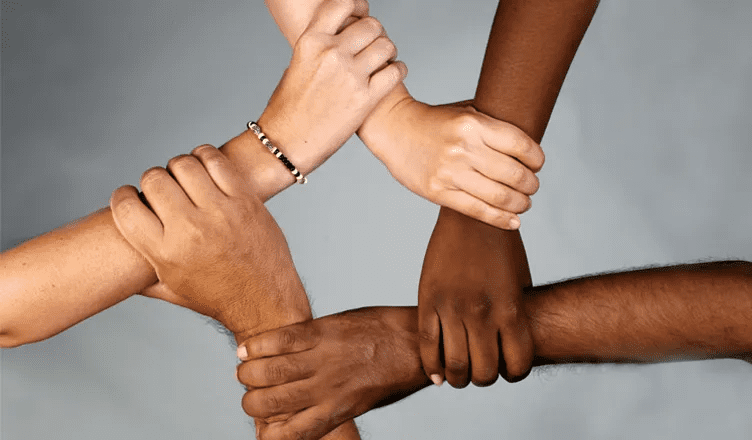 Issue of Racism in Korea: A Brazilian’s Perspective