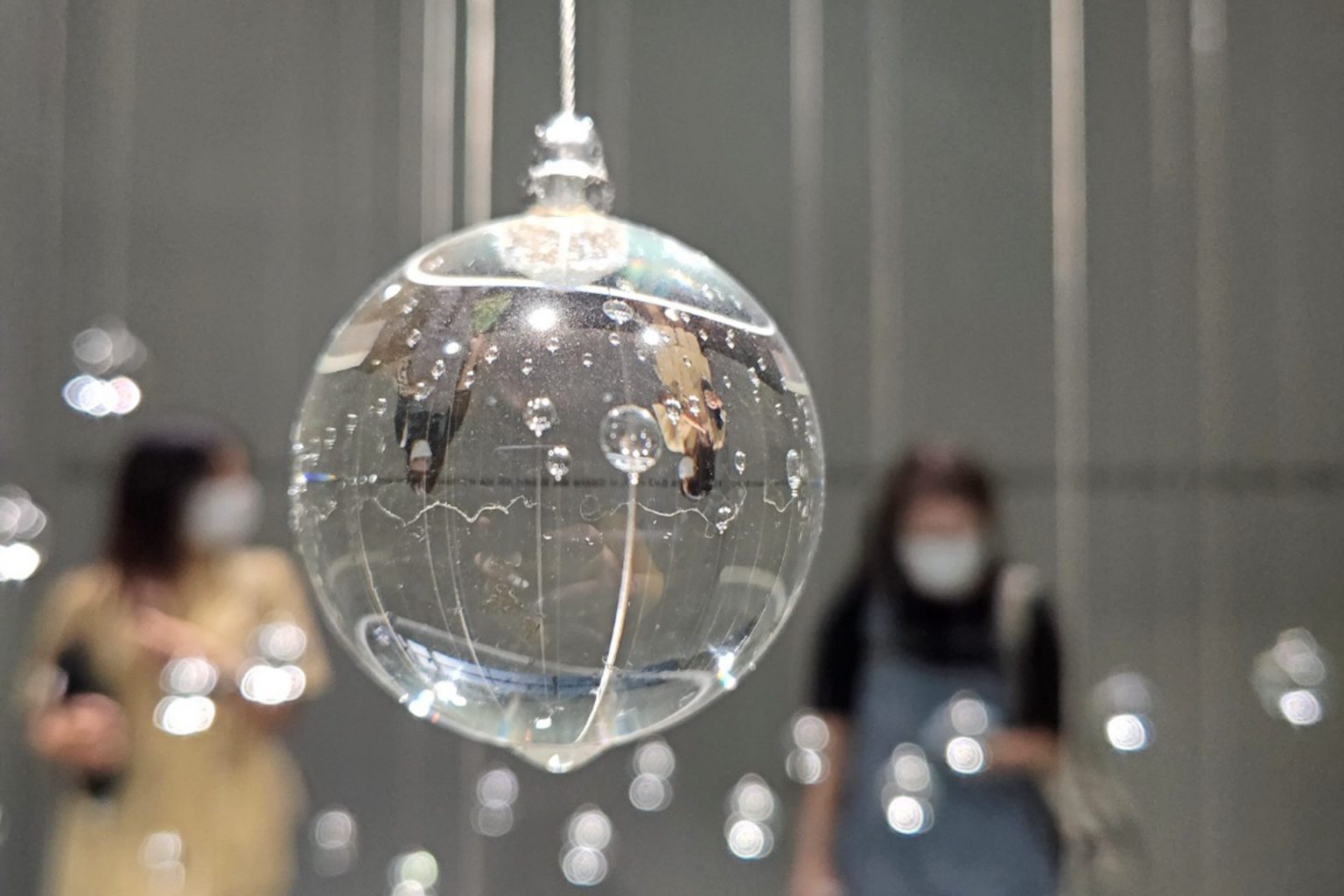 Lancome Paris is hosting a free interactive pop-up event in Seoul through Sunday, September 4, 2022. The event is being held to promote a new line of products, Lancome Génifique Wave.

My friend and I spent Sunday afternoon in Itaewon. On our way back from a delicious Turkish bakery nearby, we noticed people coming out of a large building with boxes reading Lancome Génifique Wave on the side.

To be honest, I’ve never used any of Lancome’s products before, but I was curious. We asked the man at the door what was going on. He told us that it was a free experience gallery and that we could get free stuff. Free activities and free stuff? Of course, we said yes!

And so, my friend and I made our way into the building. Right away, we were greeted by a herd of handsome men. I am taken, my friend is married, but it was a welcome sight nonetheless. One of the extremely tall and attractive staff came up and told us we should add Lancome (랑콤) on Kakao. Then, we clicked a few buttons and came to the Pop-up’s passport page.

On a side note, even if you don’t want to use data, you can still participate. They have free wifi for the event. Plus, they did have staff who speak English.

Once a small group had assembled, we were escorted into the first room. 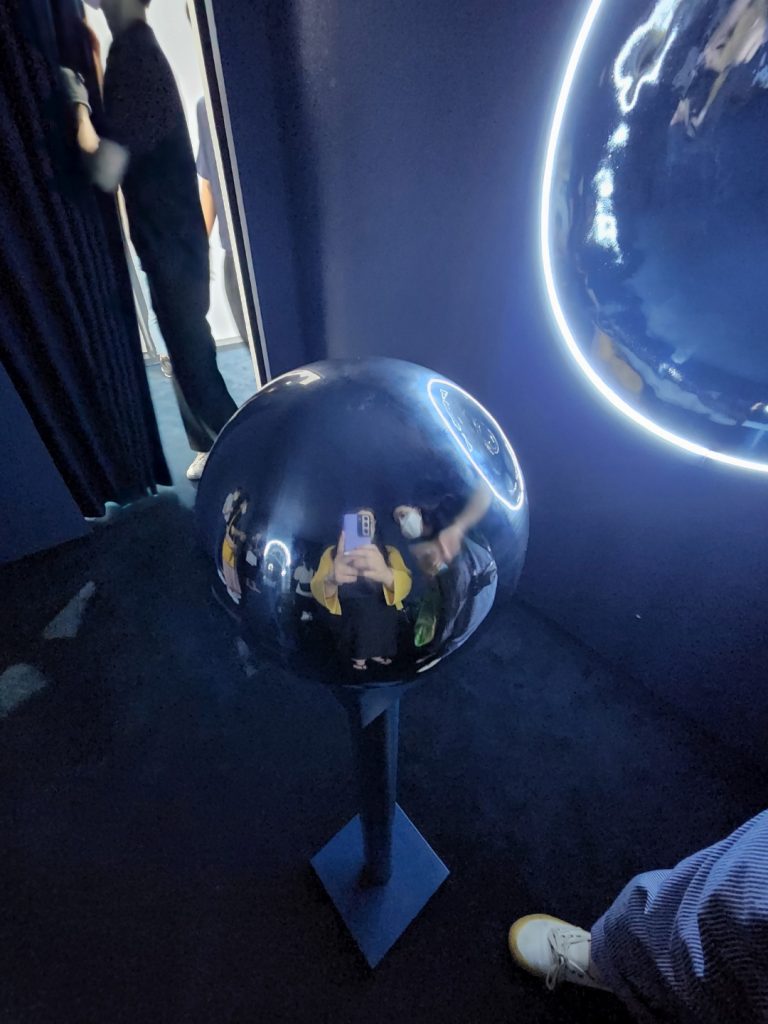 It looked like something out of a sci-fi movie. There was a large neon ring emitting blue-silver light around a speaker. Then, leading away from the speaker, were large metallic orbs. Calming music was playing and when we pressed down on the orbs, they made a plopping sound.

It was a little weird, but very Instagram. Once the sound had played through, a good-looking guy came and held a stamp to our phones. It ticked off the room on our Pop-up passport.

Next was a room called Génifique Light. I was very surprised by my reaction to this room. There were calming nature sounds playing as the room lit up with different colors. In front of us, there was a mirror that made our reflections carry on into the distance. 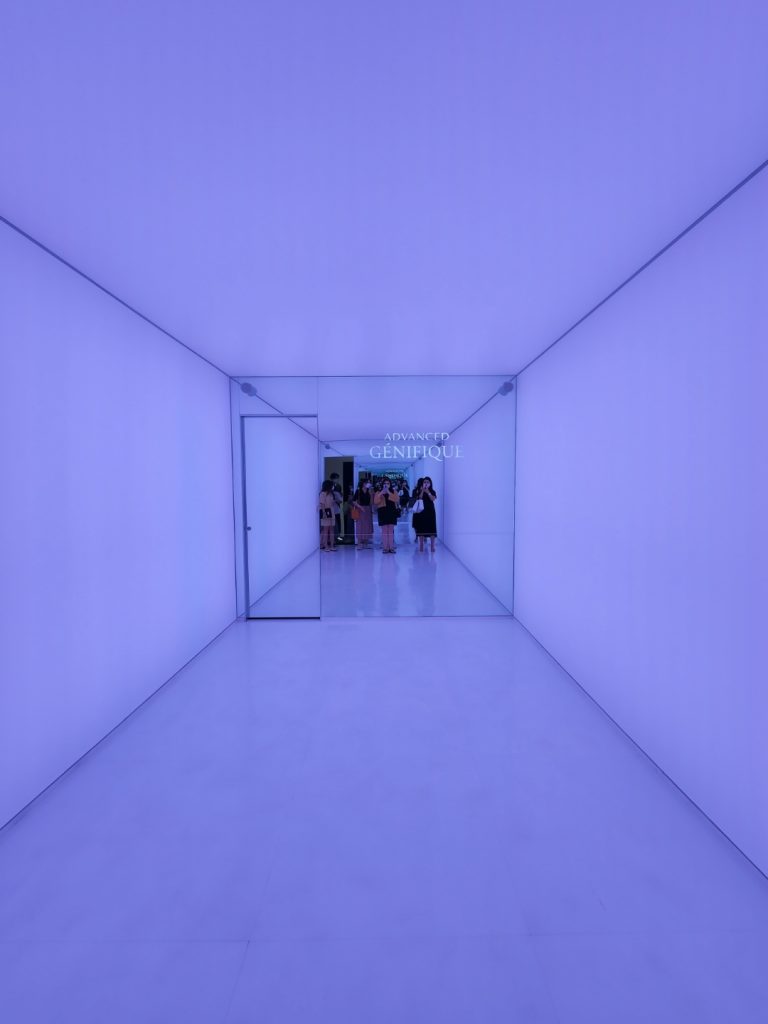 About halfway into the light show, I began to feel extremely relaxed. If we had been seated, I would have fallen asleep. However, I came out of the room feeling much more bright and cheerful than I had when I entered.

In the next room, I whipped out my photography skills. The photo is very misleading – I don’t think the room was bad, but in the photo it looks more interesting than it really was. 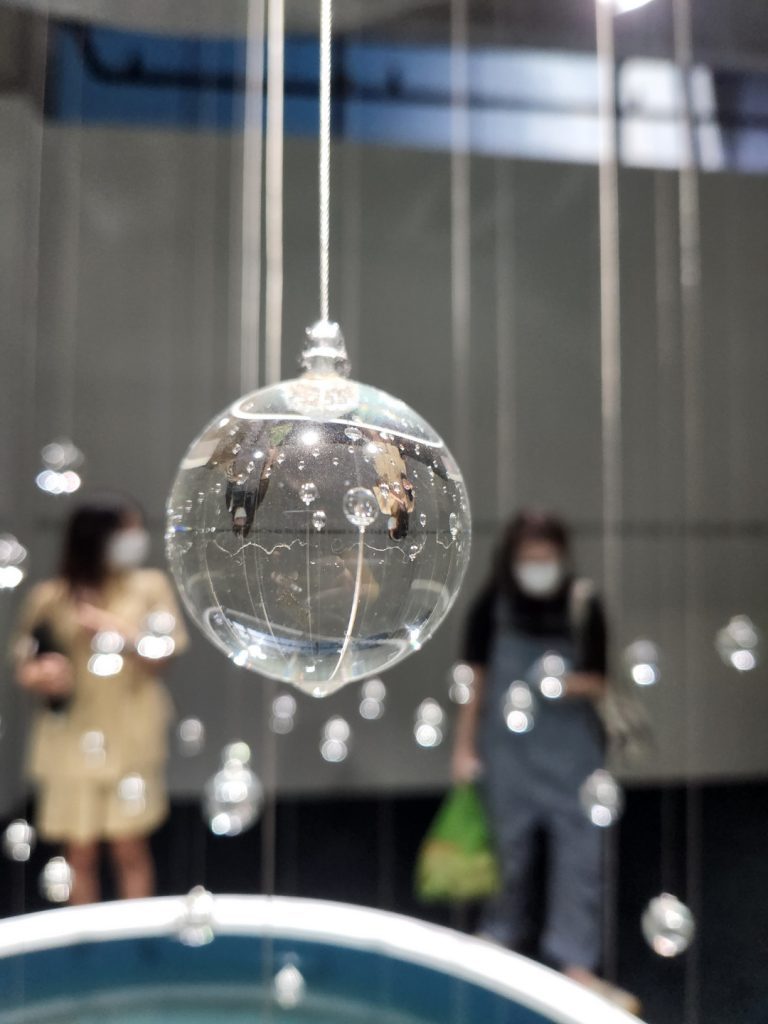 There was a small pool of water in the middle of the room. Above it, there was a circle of glass balls on wires. Then, they dipped into the pool in a wave motion. It was cool from a mechanical standpoint. However, I wasn’t really artistically or emotionally moved by the display as I had been in the previous room.

Once we were done with the experience rooms, we entered the room with Lancome’s Génifique Wave line on display. 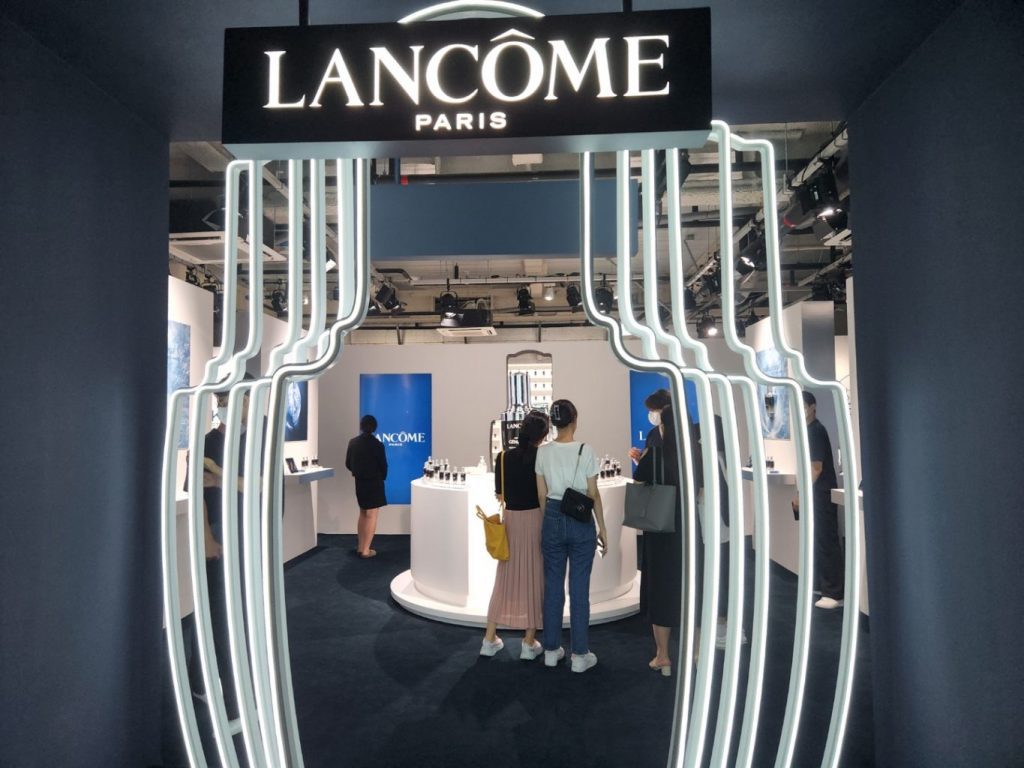 We received our final stamps and were given the option to register for a skin consultation. At first, I was a little hesitant because I thought it might just be a sales pitch. However, the gallery was free, so we decided to just sign up and see what would happen.

My friend and I both don’t have a problem communicating in Korean, so I am unsure if there is English assistance available for the skin consultation. However, they began by asking what issues we believed we had with different issues related to our skin.

I have extremely dry skin, have struggled with acne in the past, and am a little self-conscious of the wrinkles around my eyes and the redness of my skin. So, that is what I told her. Next, she did multiple scans of my skin.

Once the scans were done, she presented the results and let me know how they compared to what I thought about the condition of my skin. First, she confirmed that I do, in fact, have extremely dry skin. However, I did not have problems with redness, acne, or wrinkles to the extent I believed I had. Actually, other than dryness, she said my skin was in far better condition than most people my age, even among Koreans.

First, she recommended I use Aloe vera during dry winter months, but unfortunately that is one thing I am allergic to. So, she said I need to stay hydrated and regularly use moisturizing products. Then, she gave me some samples and sent me on my way. There was so overwhelming sales pitch, which I was satisfied with.

After our consultation, it was time to leave. But, we had one final stop. Right before exiting the building, there was a counter where we presented our digital passports. They stamped it one final time and told us to choose a goodie bag.

Both my friend and I got the same thing. There were multiple packets of serum and a small vile of toner. It wasn’t anything overwhelming, but it was free so I was okay with it. However, they did say that some of the goodie bags have full-sized lipstick in them so, it is even more of a reason to go to this free event.

Overall, the Lancome Génifique Wave Pop-Up was a good experience. However, it isn’t something I would personally travel to go and see. But, if you are in Itaewon already, it is a nice addition to a day out.

In addition, if you are an influencer or someone who regularly needs trendy photos, this is a great location. If you are creative with the angles you use, you can get some pretty amazing photos in each of their rooms. Normally backdrops like this require an expensive coffee or cocktail, so this would be a nice opportunity to save money while creating intriguing content.

How to Get to There

The Lancome Génifique Wave Pop-Up is less than a 5-minute walk from Itaewon station. Once you take exit 3, keep walking straight uphill. The building will be on your right. It is extremely difficult to miss. It is a large building with no windows and a giant Lancome banner covering the entire store.

If you are interested in Korean skincare and don’t know where to start, no worries, we’ve got you covered. Click Here for information on how to start your Korean skincare journey. 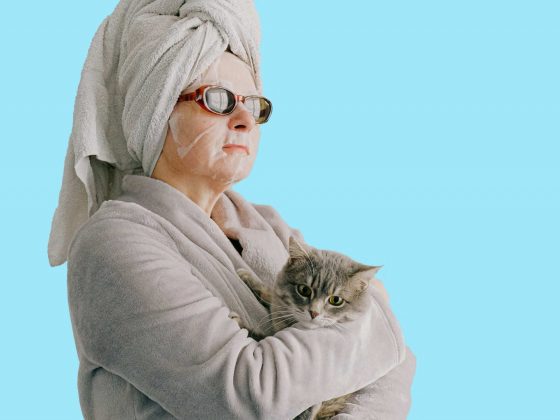 How to Start Your Korean Skincare Journey 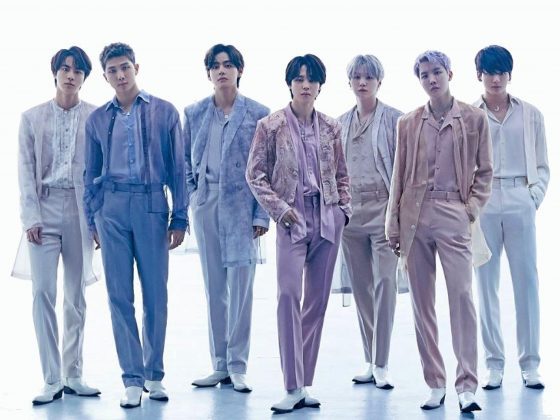 How to Get Tickets to BTS Yet to Come in Busan