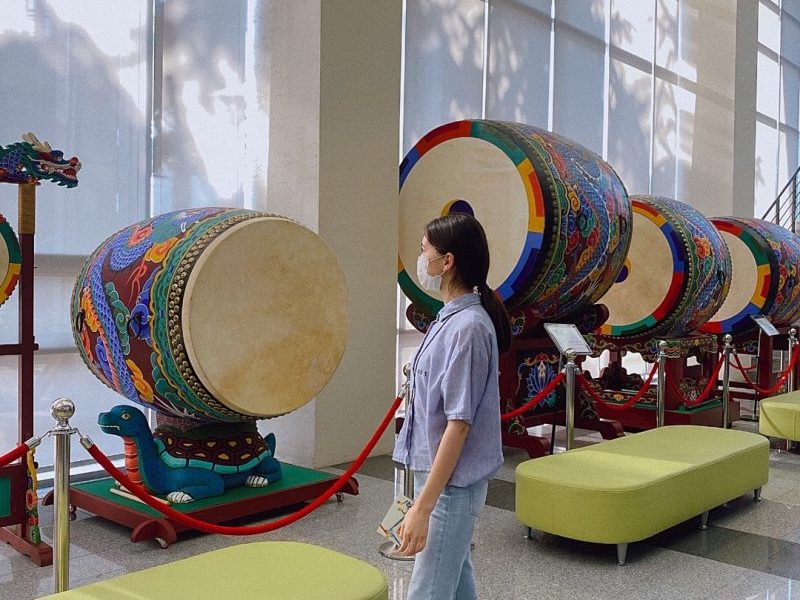 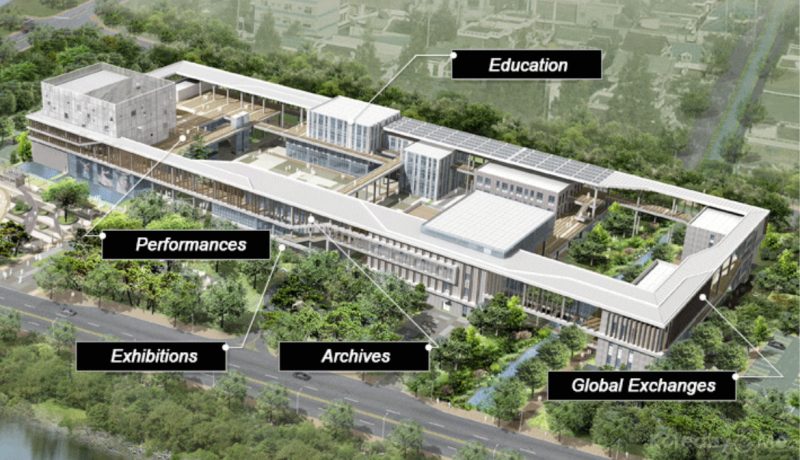 The center has permanent exhibition hall that introduces the meaning of intangible heritage as well as intended for the storage and display of archives. Besides, it has grand and small performance halls for various events, festivals and concerts of intangible cultural heritage. 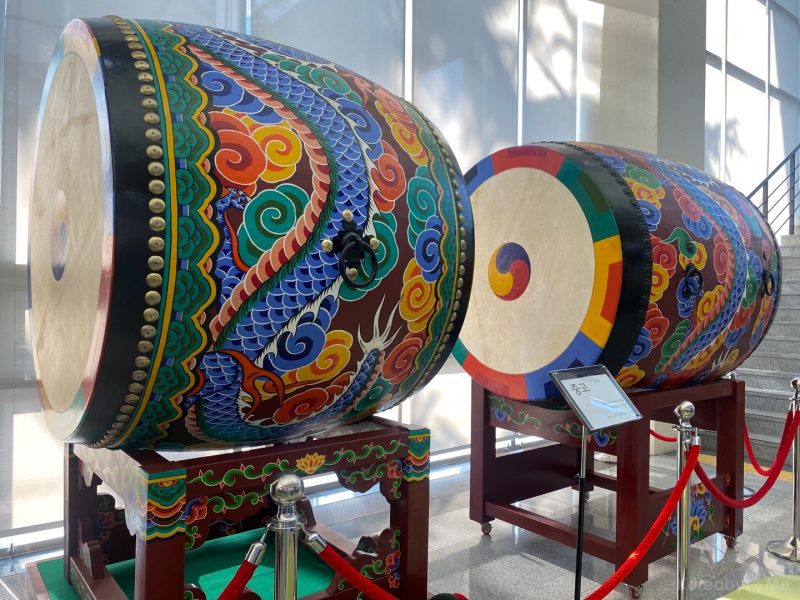 Moreover, there is education space, where operates some education courses, like crafts training, performing arts training. 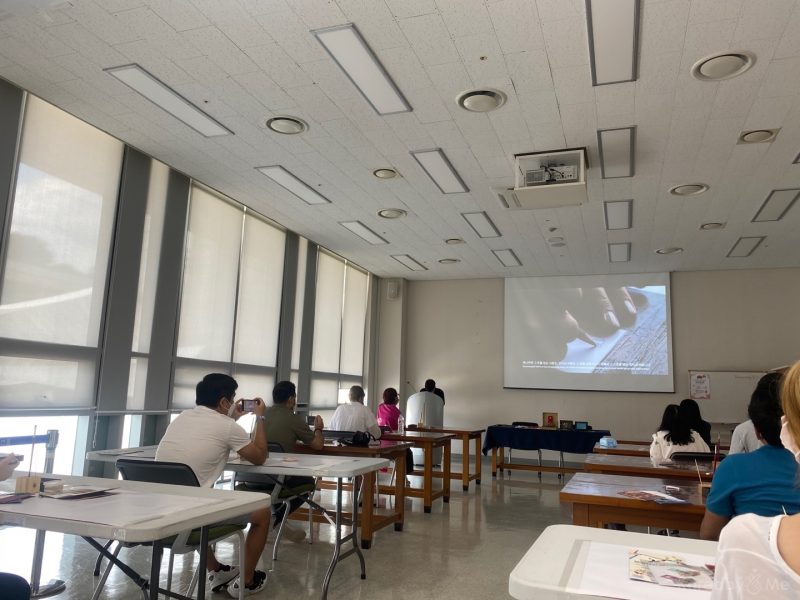 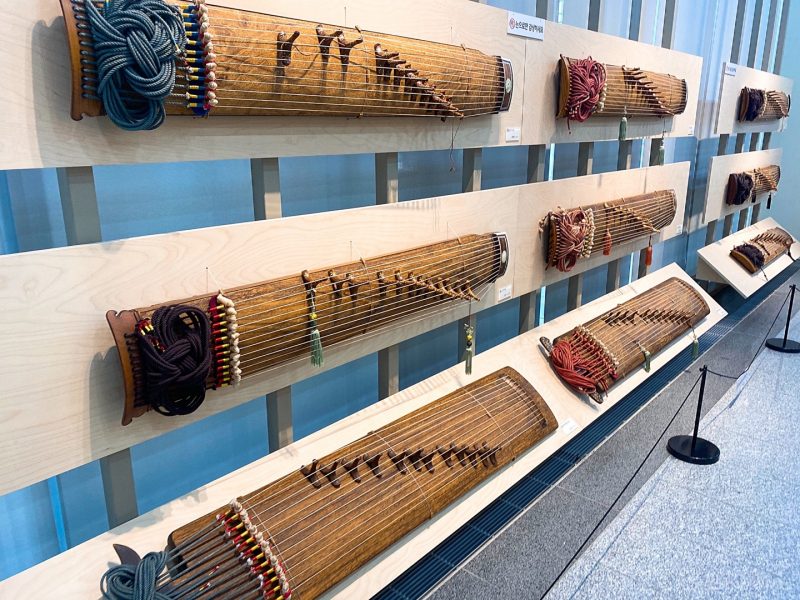 I visited this Center during the Korean Intangible Heritage Festival and learned different intangible heritages of Korea. 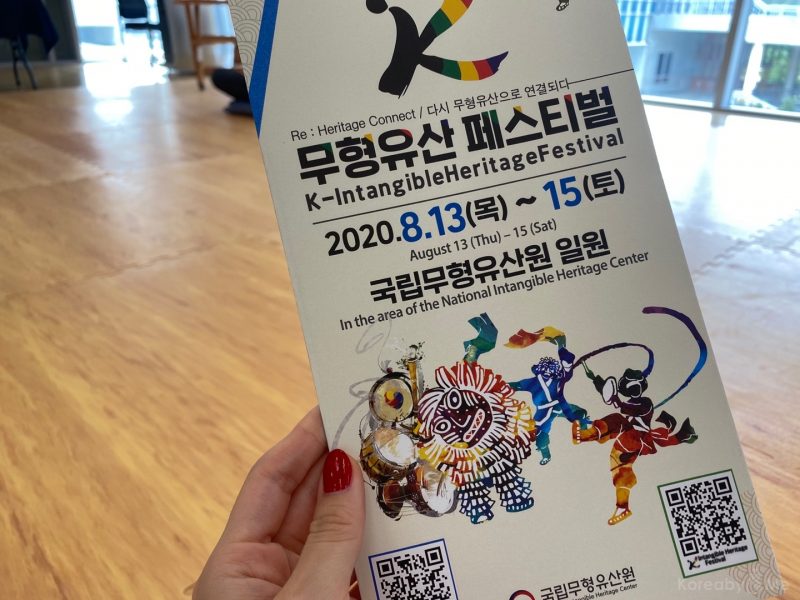 Let me introduce some of them! 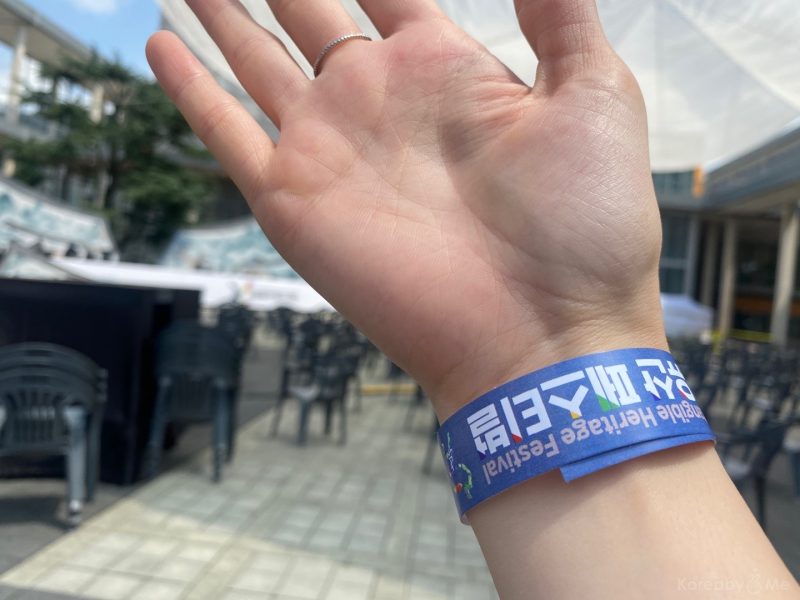 Talchum (탈춤) is a Korean mask dance, originated in Korean villages as rites and rituals so as to clean houses, protect villages and have a good harvest. After once had been performed at the court, during the Koryo dynasty, it became a popular entertainment and performed at royal banquets. 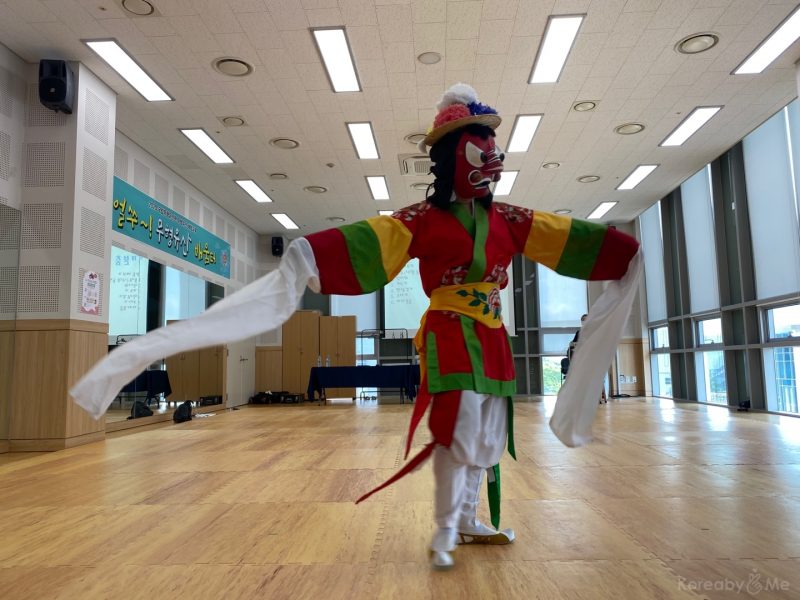 However, Talchum was not just a mask dance, but also included a dramatic content. It was reflecting the frustrations of lower classes towards the yangban (ruling class or gentry of dynastic Korea). So, Talchum was a way for showing the life of the common men, social problems and evils, privileged class. 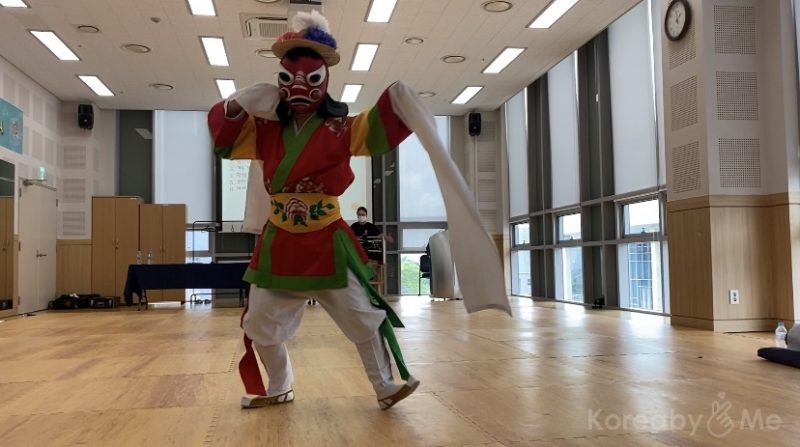 Mask dances varied according to region and performer. Nevertheless, they had common themes and dancers generally performed it on the big holidays, such as Buddha’s Birthday, Dano festival and Chuseok (“harvest festival”). Toward the end of dance, the mask dancers and audience joined together and brought the dance to a final. 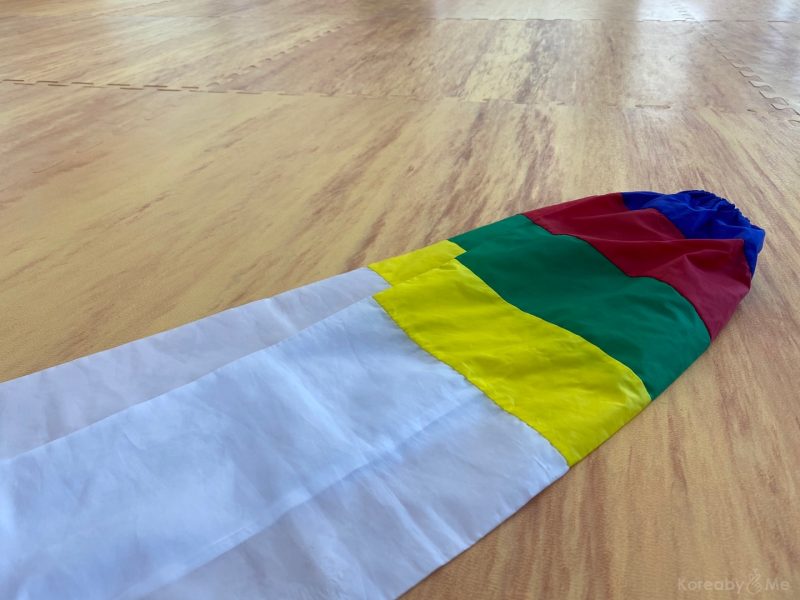 There are about 13 types of Talchum in Korea and among all of them “Bongsan Talchum” and “Hahoe byeolsingut talnori” are especially popular today. The “Bongsan Talchum” is recently attracts global interest, after the idol group BTS created music and dance inspired by it.

GeumBak (금박) is a creation of gold patterns on clothes, was designated as Important Intangible Cultural Heritage No. 119. 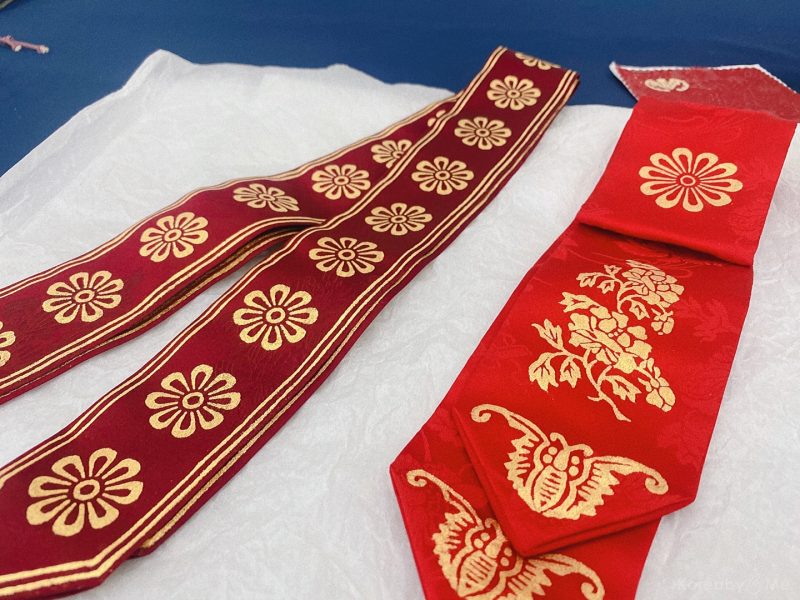 The master of geumbak is geumbak jang. In the Koryo Dynasty, gilding was used for paintings and Buddhist statues, because Buddhism was the national religion. Thus, geumbak had a religious content. On the other hand, in the Joseon Dynasty, when Confucianism was dominated, the gilding had a royal purpose. Royal families worn clothes with gilt patterns in order to show and magnify their dignity and authority. Especially, dresses with gold imprints were evident at royal weddings.

Beside dresses, some stuffs, such as bookmarks, greeting cards, pockets also decorated by masters with gold-gilt images. 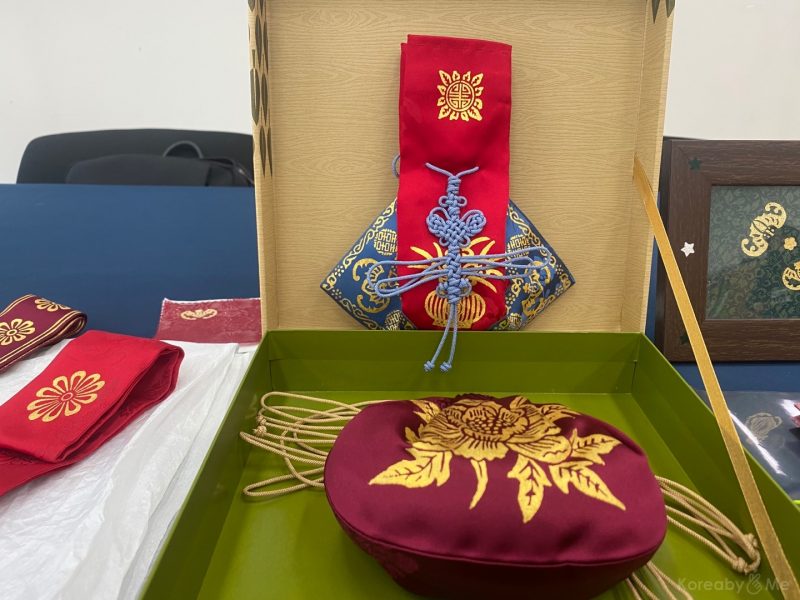 I had an exclusive chance to make my own pocket with gold imprints and learn the traditional gold leaf gilding technique at the Intangible Heritage Center. 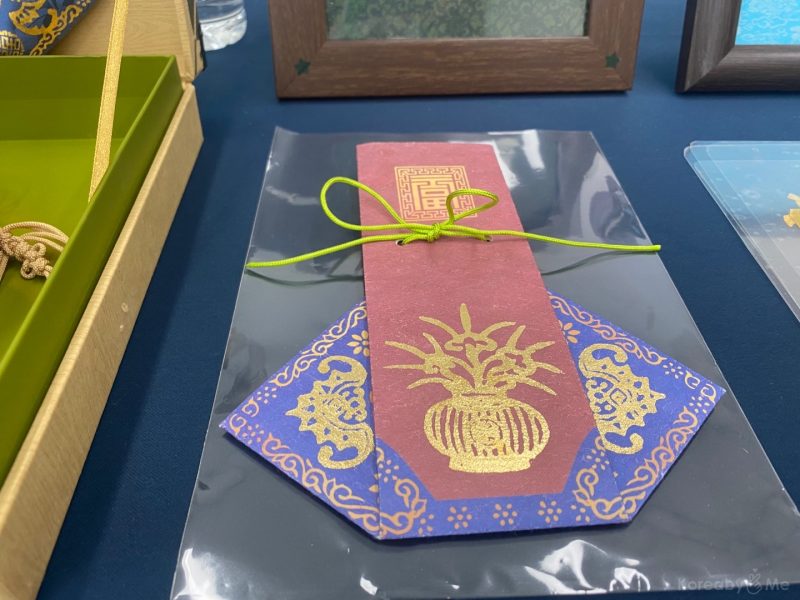 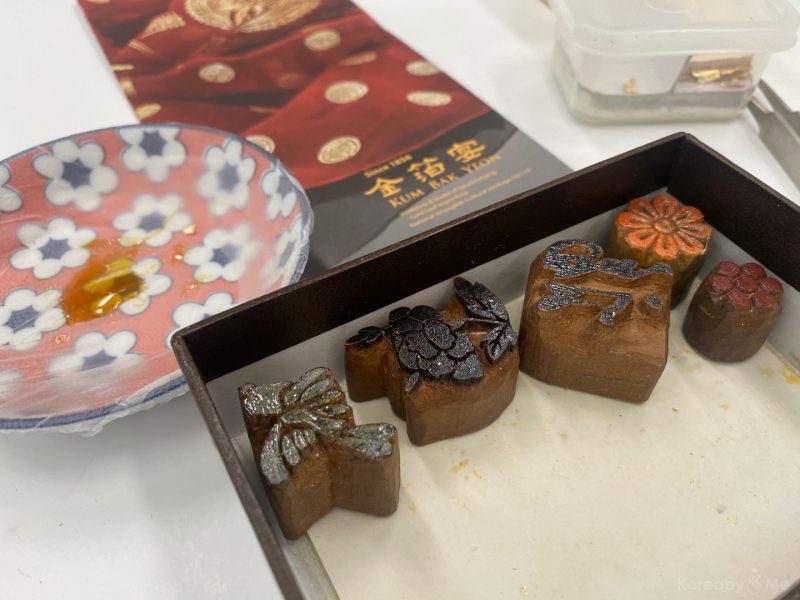 Pansori (판소리) is a Korean musical storytelling performance by a singer and drummer. The UNESCO added pansori in a list of World Cultural Heritage as a Masterpiece of the Oral and Intangible Heritage of Humanity on November 7, 2003. 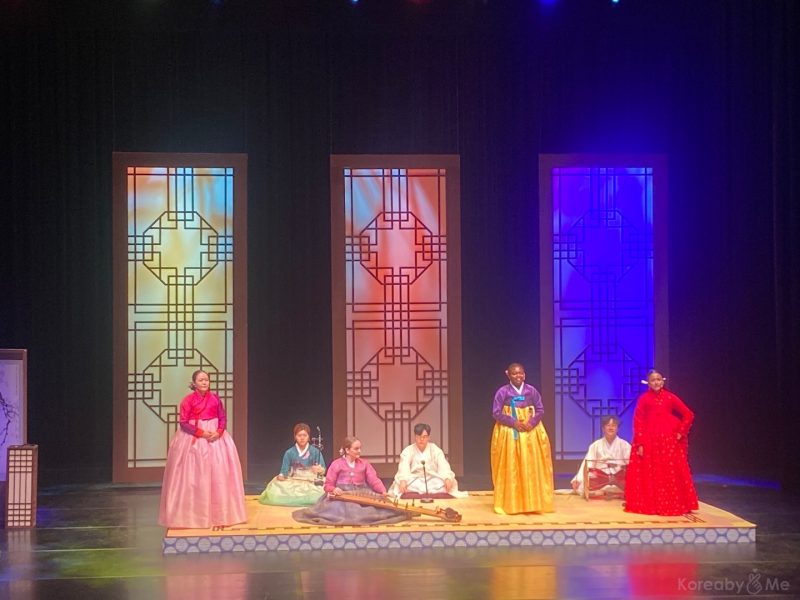 This kind of musical performance appeared in the late 17th century in Joseon Dynasty and the first region of the pansori development was Honam, Jeolla Province. The 19th century was a period of pansori’s popularity and musical techniques improvement. However, in the early 19th century, due to Japanese occupation, the pansori had a more tragic content. Additionally, Japanese government censored pansori, that included Korean nationalism content. 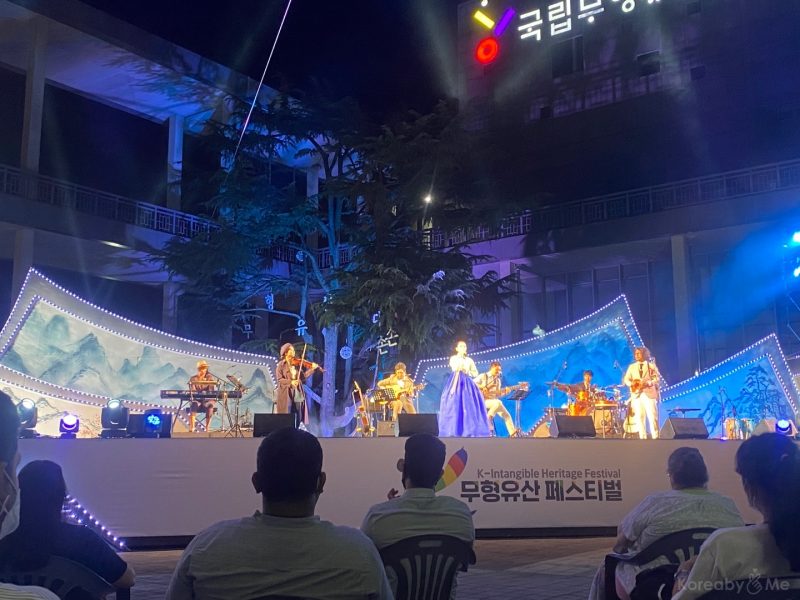 In the late 1960s, the government of South Korea recognized pansori as “living national treasures” and contributed a lot to preserve the tradition. Today, this Korean genre of musical storytelling is popular among older people, scholars and students of traditional music.

Pungmul (풍물) or Nongak (farmer’s music) is another Korean intangible heritage. It is Korean folk music tradition, that played at collective labor works, rural holidays and community-building events. Pungmul consists of music, dance and acrobatics. The central position of pungmul is the music playing by drummers. Generally, there are five kind of drums for playing pungmul. They are kkwaenggwari (RR- ggwaenggwari) (small handheld gong), janggu (hourglass drum), buk (barrel drum), and jing (gong) and sogo. 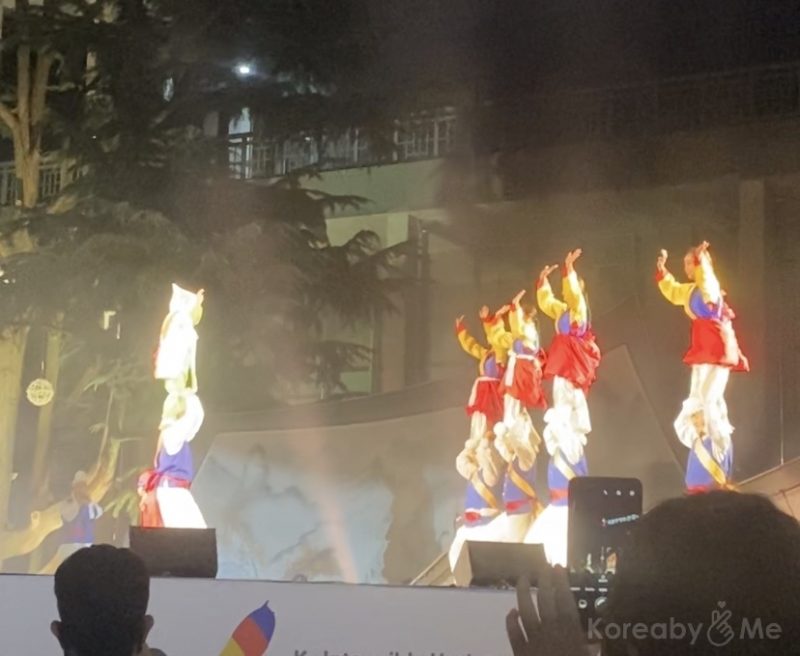 Following the music by drummers, dancers show the dance performance including some acrobatic choreography. The performers wear national brightly colored costumes. Some dancers have sangmo hats. The sangmo is a Korean ribbon-hat, that dancers were wearing during the dancing and moving head around. 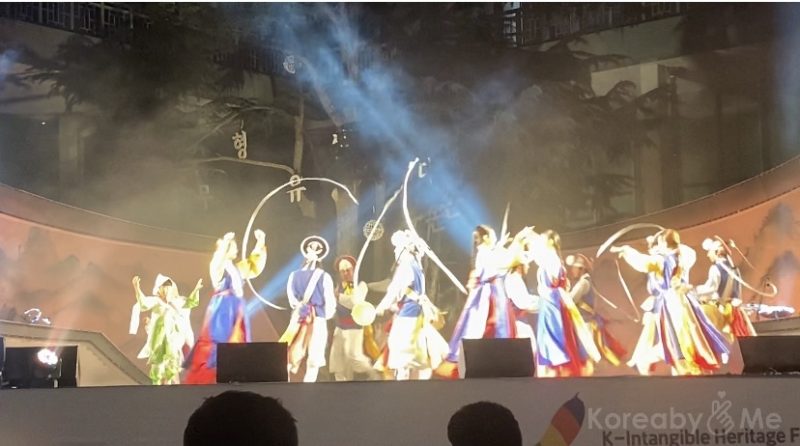