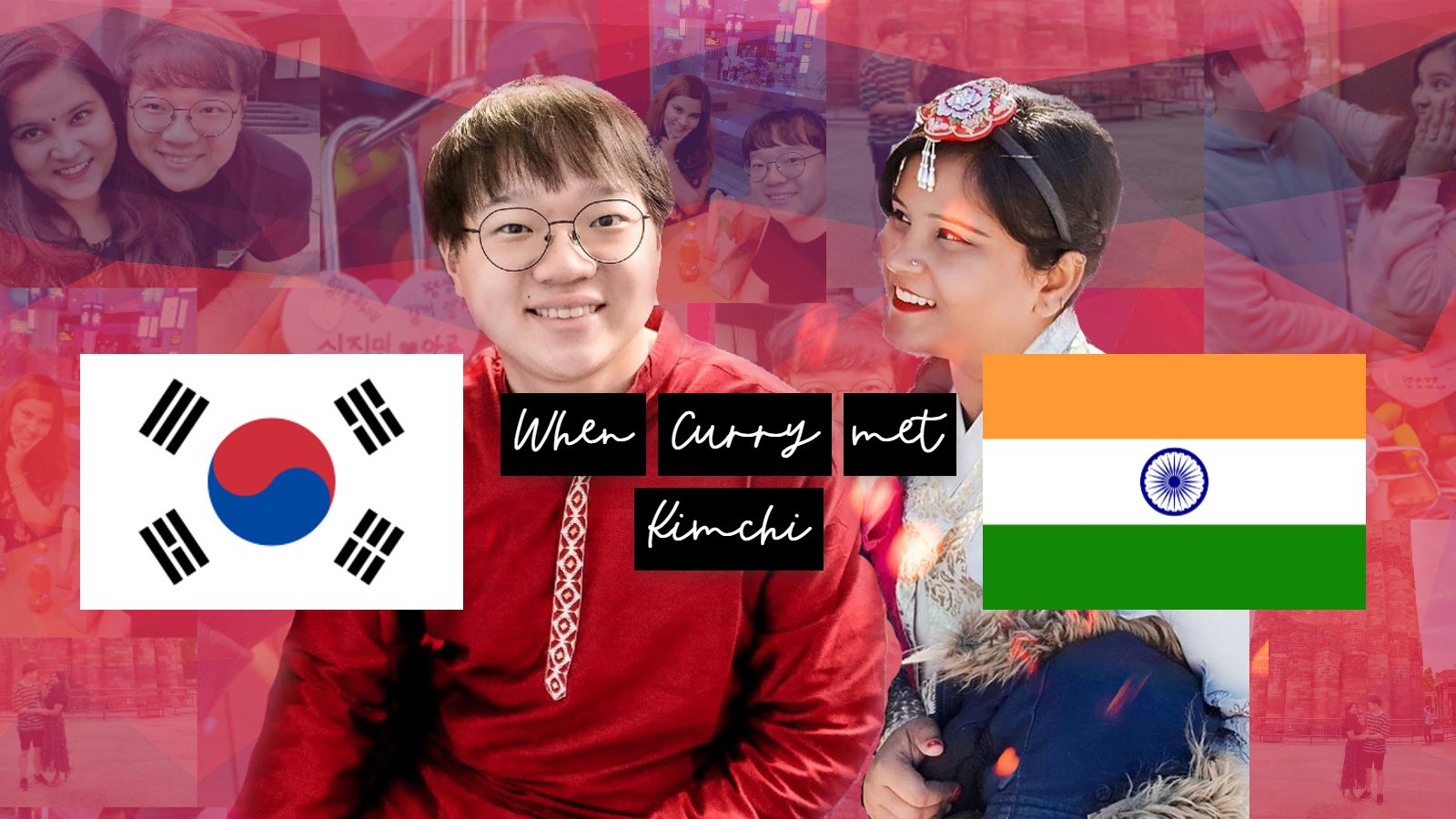 People say curry and kimchi are one of the best combinations, and this I can attest to. We are Shivangi and Jimin, also known as Curry n Kimchi! Today, we’re going to tell you the story of our international love, as an Indian (Shivangi) and Korean (Jimin). Additionally, we’re going to share with you some of the difficult parts of international love, from long distances to cultural differences. But don’t worry, our story has a happy ending.

As previously mentioned, we are an Indian-Korean couple. We’re both in our 20s, both born and raised in our country of origin, perhaps more connected to our cultural roots than most. Both of us never really had the chance to travel outside of our respective countries, but thankfully, we did.

In 2017, Jimin moved to India for work, where Shivangi joined a Korean company based in India. Although they worked in different companies, they ended up on the same collaboration project in Noida, a city in India. Their offices were on the same floor and they passed each other practically every working day, none the wiser to their shared future. Furthermore, Jimin was close friends with Shivangi’s Korean colleague. Therefore, he would visit her room once or twice a day, for work purposes.

I got used to seeing Jimin smile every day. While I had no intentions of dating him, there was something about him that just made me happy. He was so sweet and kind to everyone he met.

While I had feelings for Shivangi, I never acted on them. However, on 23rd Jan 2018, I went to her desk and asked for her phone number. I told her that a colleague needed it for something work-related.

That evening Shivangi noticed Jimin’s profile pop up on KakaoTalk… ah, he must have saved the number right? She messaged him to ask him his age, as most people in the company were middle-aged men (ah-jeo-ssi). Lo and behold, Jimin was just 2 years older than her. They ended up talking for hours and becoming close friends.

Shortly before Jimin was due to return to Korea for the holidays, Shivangi suggested that he should try some authentic Indian food, as it was Republic Day (26th Jan.) For Shivangi, it was just hanging out with a friend; a foreigner for whom she was happy to be a tour guide. However, for Jimin, it was their first date. Shivangi took him to the Safdurjung Tomb, a must-see historical site in Dehli. However, this place became a special venue of history for Shivangi and Jimin, as this is where Jimin took her hand and told her of his feelings. Magical right? Not quite… Shivangi told Jimin she wasn’t ready for a relationship. The two laughed it off and managed to stay friends, but Jimin was willing to wait until Shivangi was ready.

Shivangi had all of the worries that one might have over international relationships. What if Jimin just wanted a temporary fling? What will happen when he goes back to Korea? Both Shivangi and Jimin didn’t know what the future had in store, but they did know that if they got together, it wouldn’t just be temporary. Jimin came back to India from his holidays, plushies in hand as they celebrated their first real date. It was scary, there were so many things that could go wrong, but they were happy with their decision. Fast forward to 2022 and they are engaged, soon celebrating their 4 year anniversary.

So, I bet you’re wondering what are the most difficult things that Shivangi and Jimin have had to face together? They were both raised in entirely different countries, each with distinct cultures and languages.

Long distance is by far the toughest obstacle. Shivangi and Jimin were together for 9 months in India, before doing long distance for an entire year! They then spent 3-4 months going back and forth from each other countries, finally enjoying another year and 3 months together in Korea. Now, because of the pandemic, the two have been separated yet again. Thankfully, Jimin put a ring on Shivangi’s finger before leaving, promising that one day they can swear off long distance for good.

When you get into a relationship with someone from another country, language barriers are practically unavoidable. However, they do not have to be the pitfall of your relationship. While English is a common language shared between multi-national couples, Shivangi and Jimin originally spoke to each other in Korean. Now they’ve been together for such a long time, Shivangi can speak Korean very well, while Jimin continues to learn Hindi.

Shivangi and Jimin learned to embrace their cultural differences instead of letting them be an issue. The key is to be open-minded and work to understand another culture’s way of life.

Say you’re in an international relationship and suddenly everyone around you starts telling you what is right and wrong, what to do and what not to do. Both Shivangi and Jimin had people in their lives who tried to talk them out of their decision to be a couple, but they ignored it. Remember that no one knows your relationship better than you. Trust your feelings and don’t let other people’s closed-mindedness bring you down.

While parents are less conservative these days, there are still many families that worry about their children dating foreigners. Jimin’s family had a hard time accepting Shivangi as Jimin’s partner, but after some time, both of their families came to love and accept their relationship.

Which country to settle in

Once you have a foreign fiancee, you have no choice but to think about where you are going to settle. Right now, both Shivangi and Jimin live in Korea. However, for Shivangi, this means living far away from everything she knows. Although Jimin will be at her side, it will never be the same as living in her home country of India. Similarly, living in India was not a walk-in-the-park for Jimin either! Taking that first step is difficult, but remember why you’re doing it and that you’re not alone.

For the one leaving their home country, they have a long road of pesky visa issues and job-searching ahead. Unless you are in a special field, you may find it difficult to land a decent long-term job. Shivangi is currently focusing on social media roles, running the couple’s Youtube and Instagram, while searching for a suitable job.

International Relationships: It can Work!

There is no magic formula to any relationship, every single one requires patience and understanding. However, for international love, you can times those by 100! But what advice do the 4-years’ strong Korean-Indian couple, ‘Curry n Kimchi’, have?

For international love, acceptance and respect is of the utmost importance. There are going to be many things that both of you will fail to understand about each other, because of your nationalities. However, the key is to be accepting and always listen to your partner when they talk about what matters to them. Do not try to change them into someone they’re not. Both you and your partner will have some deep-rooted beliefs that cannot change overnight. If you feel the urge to change them, then they may not be right for you.

You may need to be more straight-to-the-point when talking about your feelings with a foreign partner. Always be open with each other and really try to think before talking. The latter, of course, can be hard during an argument! Regardless, accept that there will be some miscommunication, and rest assured that calm conversation and understanding will see the two of you overcome your barriers.

Step into their world, learn their language

You will never understand your partner’s country and culture if you don’t try. Hit the web and start learning their language, cultural norms or their country’s history. If possible, plan a trip to go there and develop your own relationship with their country and culture. You do not need to become completely fluent in their language, but a knowledge of their native tongue allows you to better explain foreign concepts or overcome miscommunication.

Never force your partner to follow a particular religion or set of beliefs that they are not used to. Instead, introduce them to the concept and help them to understand why you follow those particular practices. In the case of Curry n Kimchi, Shivangi is Hindu and her religion forbids her from consuming beef. Furthermore, there are certain days where she cannot eat any meat or egg at all. However, she does not expect Jimin to follow these rules, just respect her choice to do so.

While Shivangi and Jimin have had their fair share of hardships, doubts and worries, they wouldn’t have it any other way. Conquering these obstacles together can strengthen your relationship for the years to come. As they’re about to start a new chapter on their journey, they of course have things that stress them, but they believe that love can overcome any hurdle.

We see rain, but we also see many rainbows. We are happy to be both eachother’s sunshine and umbrella.

Curious about dating in Korea? Check out this article.

Namaste! 안녕하세요~ Curry n Kimchi입니다. Meet us, we are Shivangi and Jimin, an Indian-Korean couple and we are more than delighted to share our journey with you all.

Can I Work In Korea?