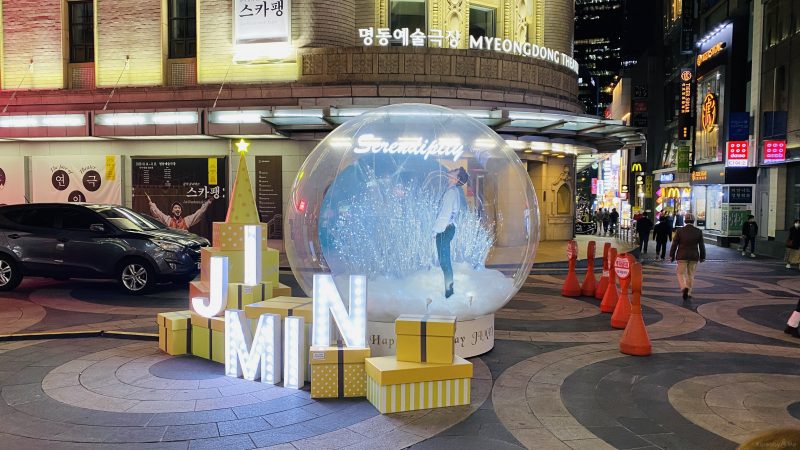 Park Ji Min is a star that needs no introduction whatsoever. Born and raised in Busan, South Korea, he is definitely a powerhouse of talent. Recently, the star turned 26 on October 13th. Therefore, it’s not surprising to see his fans ring in the star’s hatch day in absolute style. Moreover, for those who aren’t aware, Jimin Birthday Celebration, Myeongdong was the most happening place to be this 2020. 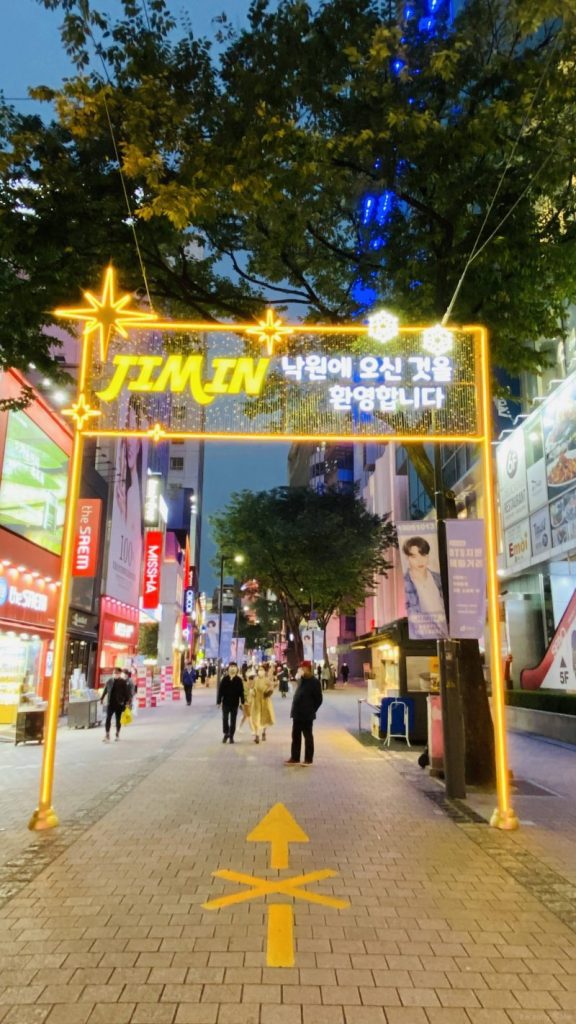 At such a young age, the heartthrob has millions of fans around the globe. And that’s why his birthday celebrations in Seoul’s hotspot district was bound to be glamourous.

Think along the lines of starry nights, plenty of lights, and décor for days. Featured on plenty of global magazines, websites, and news channels too- if you missed it, here’s something special for you.

Arriving at your destination

To get to the famous Jimin Birthday celebration, you need to arrive at Korea’s famous shopping district, Myeongdong. For this, take Seoul line number 4 to Myeongdong station. Now get off at exit number 6. You’ll immediately see the giant display in front of you. 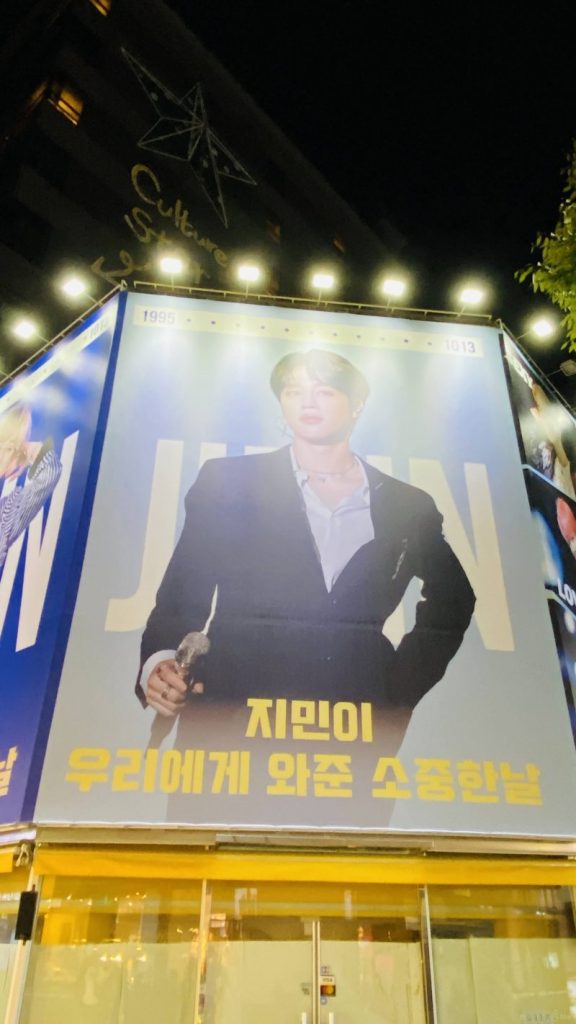 Before we get into the actual fan site that seems to be the hottest thing in town in Seoul, let’s take a trip down memory lane. Who is Ji Min and why is the world going crazy over a single star.

The world of KPop is one of Korea’s finest and most popular offerings. And one name that’s on everyone’s mind is BTS. Ji Min was the last member to join the mega-stardom that surrounds the popular boyband. 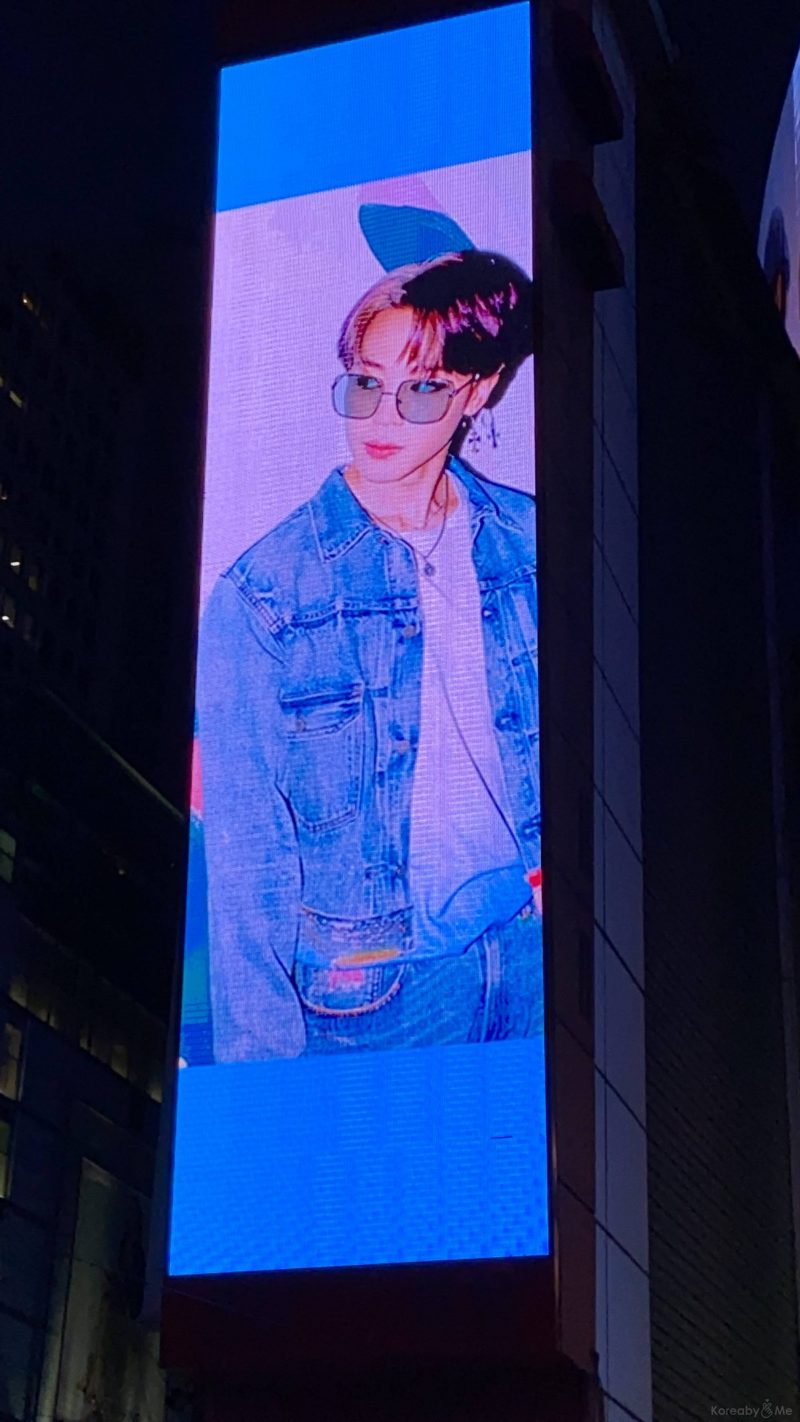 Nevertheless, his fame is just as much as the others. Jimin lives with his parents and younger brother. As far as education is concerned, it’s no surprise to note that dance and singing were in his genes. Hence, he joined Busan’s High School of Arts.

Graduating as a top student in the world of modern dance, he was always conscious of his looks. However, little did he know, the world would fall in love instantly. 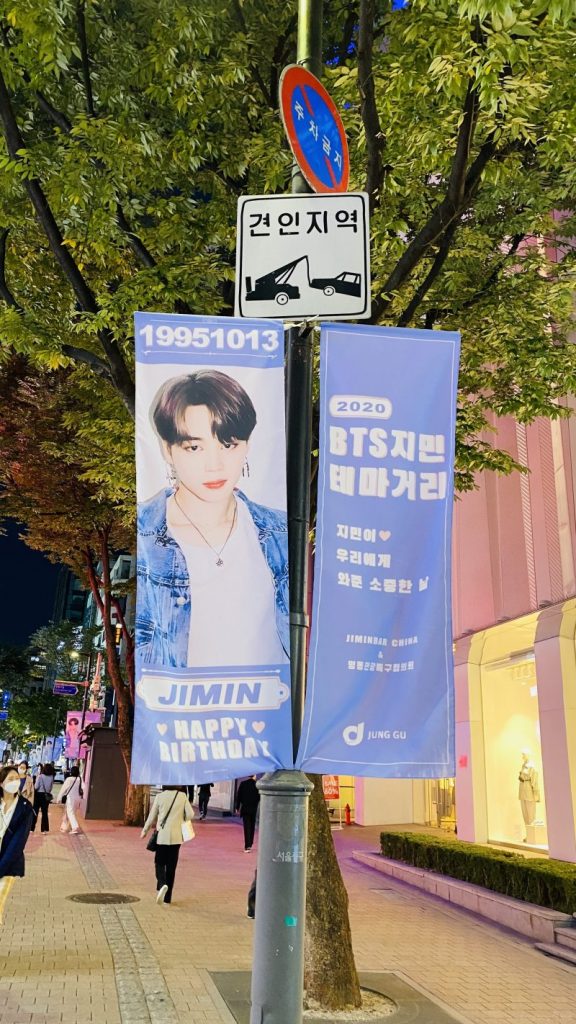 Kpop idols may be plenty but there’s truly something special about Jimin. His striking personality and chocolate boy looks have fans in a frenzy. Did we mention his talent too?

From an incredible voice to romanticism at its finest, there’s truly a lot to brag about here. Meanwhile, you won’t believe how humble this star actually is.

Despite being one of the last members to join the pop group, it’s popularity is just as much as the others. Hence, the stunning fan sites are proof of this notion. 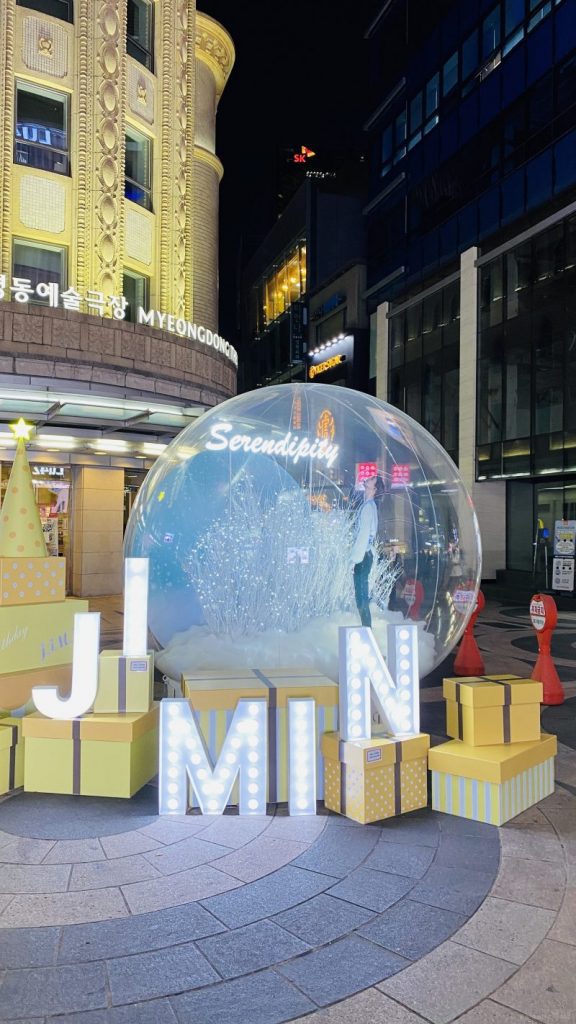 Therefore, it’s no wonder why he received a staggering amount of birthday wishes. And no, we’re not solely referring to Korea. From the Asian subcontinent to Australia and the Caribbean, plenty of hearts beat for Jimin.

Hence, when it came to Jimin birthday celebration, Myeongdong, everyone’s eyes were on this destination. Some cried while others enjoyed through the camera glimpses. Whatever the case may be, it was nothing less than a magical affair. 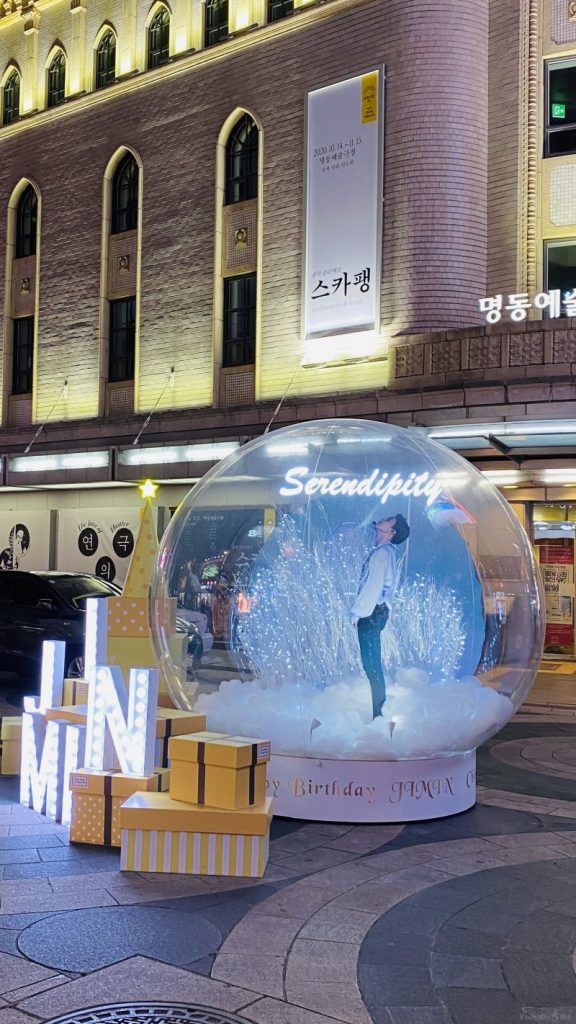 It wouldn’t be wrong to term this stunning project as a fairytale wonderland. Needless to say, the pop star’s fans seem to be as romantic as the man himself. Therefore, witnessing the efforts put forward here is simply mind blowing, to say the least.

Located in the famous Myeongdong district of Seoul, you don’t need to ask for directions. And that’s because once you arrive here, you’ll instantly see the stellar layout that’s too good to be true.

While the star maybe 26 in Korea, he is commemorating his 25th birthday worldwide. For those who may not know, you’re always one year older in Korea as compared to the rest of the world. So simply add one year to your actual age and that will give you your age in Korea. 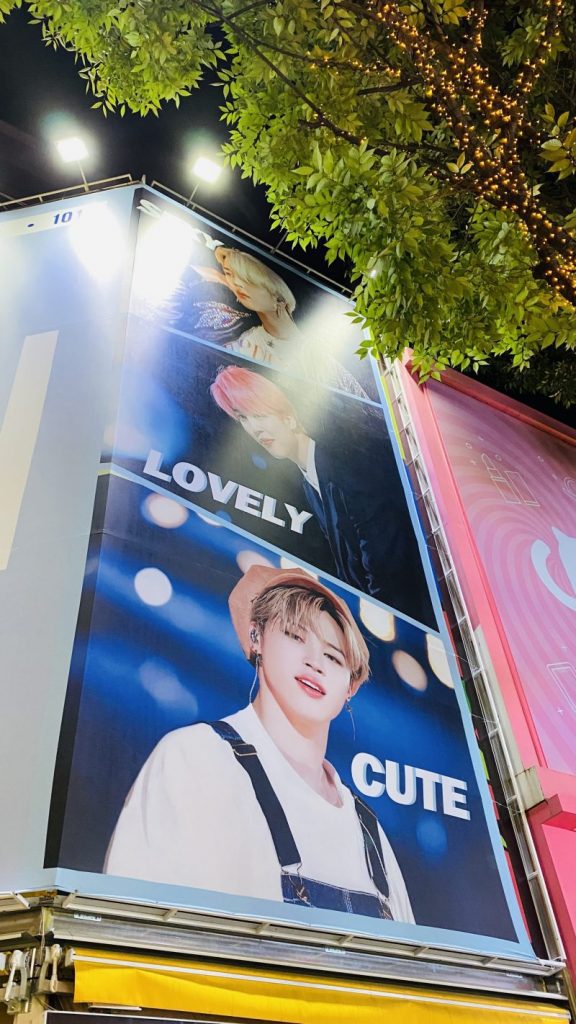 Chinese fan Park Jiminbar speaks out on his masterpiece creation

As a fan of BTS, you’ve probably seen some pretty interesting and incredible things. However, this might be something that’s miles apart from the rest. Think along the lines of Jimin Paradise.

Yes, arriving at the location will make one gasp in sheer awe. Moreover, it simply wouldn’t be wrong to say that this talented fan went beyond extremes.

Jimin Birthday celebration Myeongdong is a component of another project called ‘Come Across Love.’ Hence, it features gorgeous displays of lights, magic, and Jimin cutouts too. If you’re planning to visit, we suggest arriving during the night time. 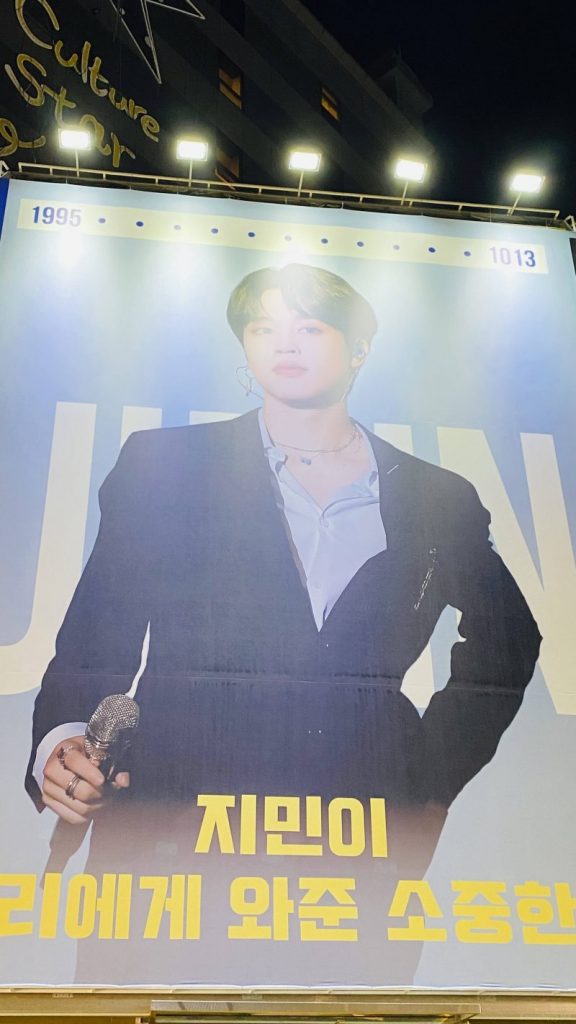 This is because the area comes to life like no other. Free to all members of the public, visitors can begin their admiration at the giant LED gate. Combined with plenty of starry lights and street flags, it’s a grand welcome

An arena that comes to life at night- Jimin birthday celebration, Myeongdong

On usually days, you wouldn’t find the streets as lit like this. Here, Myeongdong screams of striking scenes of pure bliss. At the same time, don’t forget the inspiring Jimin serendipity set replica. It’s a treat for fans as they get the ultimate opportunity to live in the BTS moment.

Likewise, they can reminisce about the rather whimsical performance. But when can fans get their hands on this wonderland? Well, starting from October 1st till October 14th– you can make all of your Jimin wishes come true.

Whether you’re a foreigner or a local, the Jimin birthday support festival has a theme that will make you want to explore more. Don’t forget to strike a post against the giant LED gate, Serendipity remade stage and street lights too. All in all, it’s truly heartwarming, to say the least. 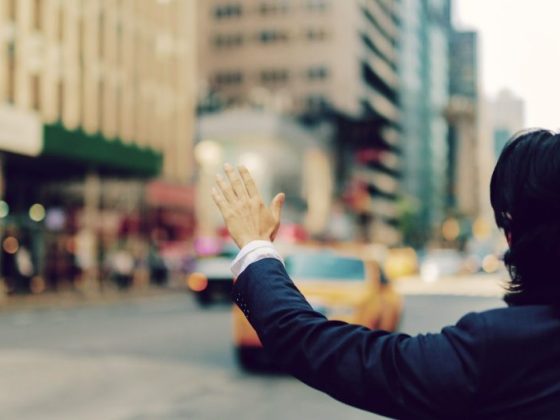 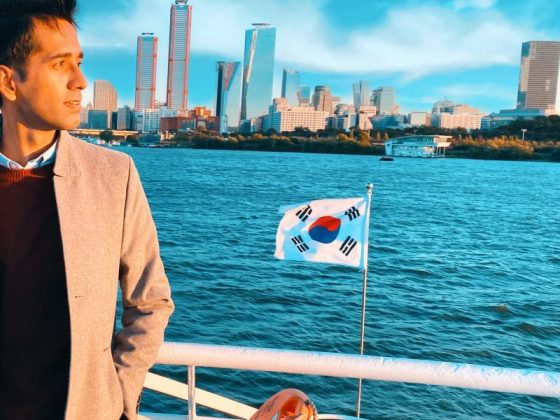