Seoul is one of the most diverse and largest cities in the world. From water parks to mountain ranges, there’s something for everyone. Therefore, it’s not a surprise that Seoul attracts all kinds of tourists. However, there’s one place you probably don’t know: the Ihwa Mural Village.

The Ihwa Mural Village is a hidden gem, located in Ihwa-dong, Seoul. It’s one of Seoul’s oldest localities, originally referred to as daldongnae or ‘moon village’. 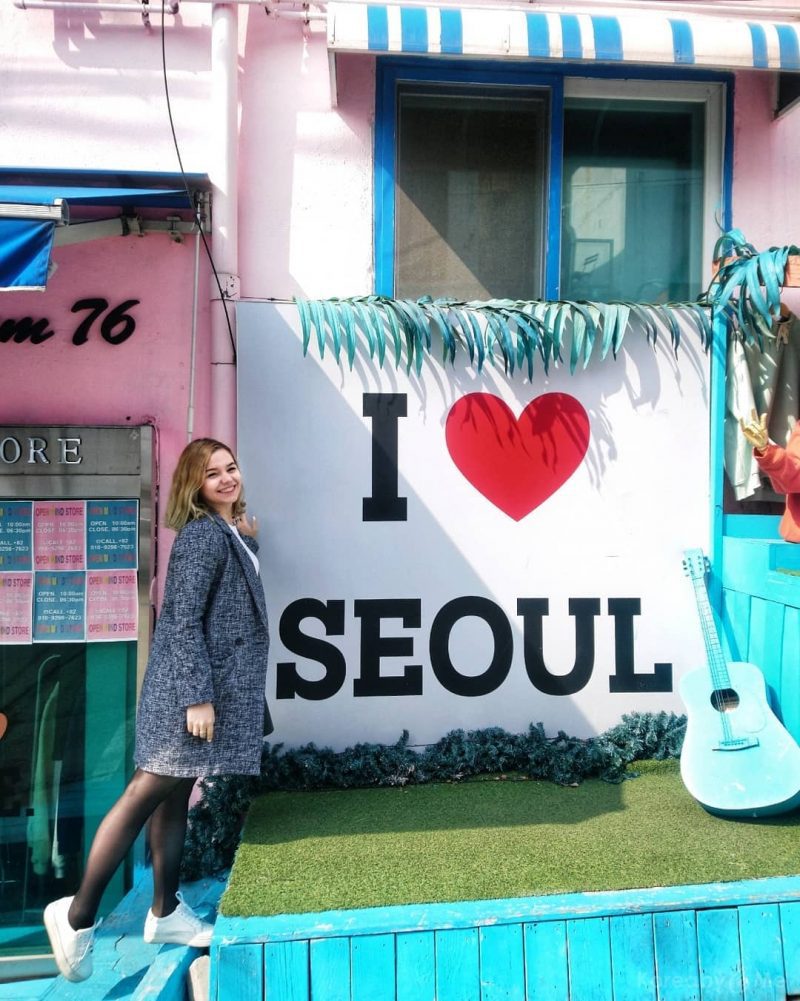 In 2005, the neighborhood, which was decaying, was revitalized as part of the Korean government’s ‘Art in the City’ campaign. Today, it’s a highly popular tourist spot, especially among artists and art-lovers.

If you’re planning a visit to this quaint village, there are a few things you should know. What are they? 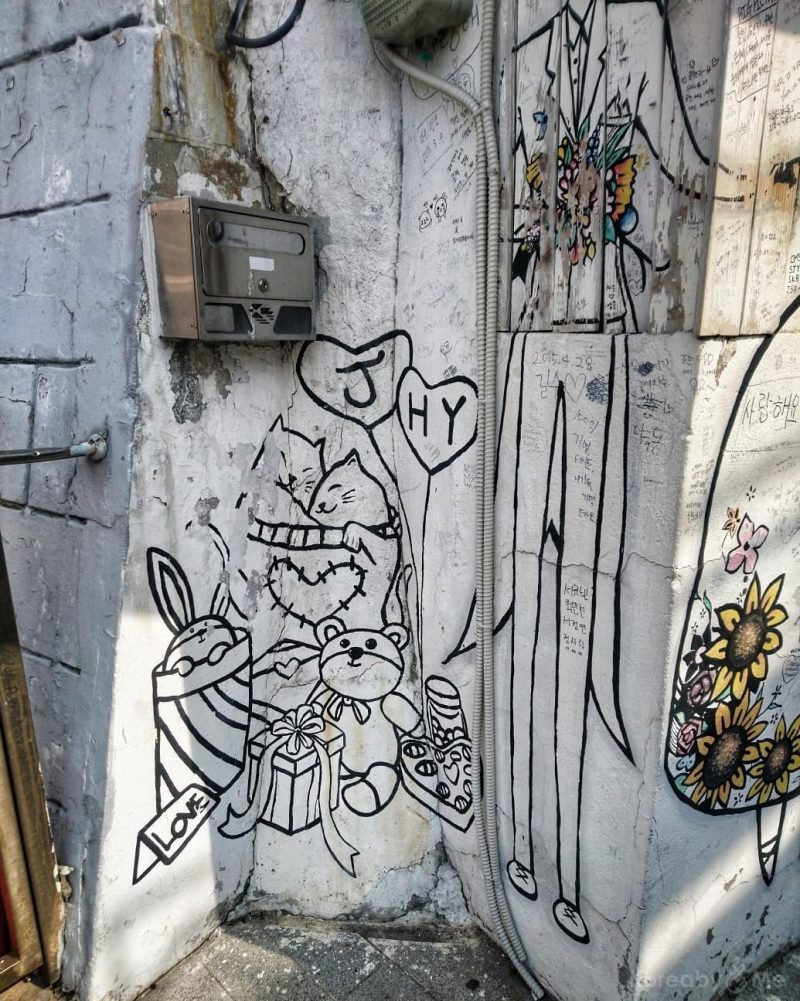 As mentioned, Ihwa Mural Village is one of Seoul’s oldest localities. Today, at a superficial glance, Ihwa doesn’t look that different from other high-class Seoul neighborhoods. However, there was a time when it was one of the poverty-ridden areas in the entire country.

During the early 1950s, while the Korean War was being fought, Ihwa was a refugee center. Refugees, who couldn’t even afford low-income housing, began living in Ihwa as squatters. Eventually, they built the area into a prospering residential and commercial zone.

Throughout the 1970s, the local government poured money into the neighborhood, building high-rises and factories. However, the area lost its vitality in the following decades, with many residents moving away and local businesses going bankrupt.

When the ‘Art in the City’ campaign began, artists from all over came to the neighborhood. As pictured above, they painted murals depicting happiness and warmth—contrasting the gloomy history of the area. 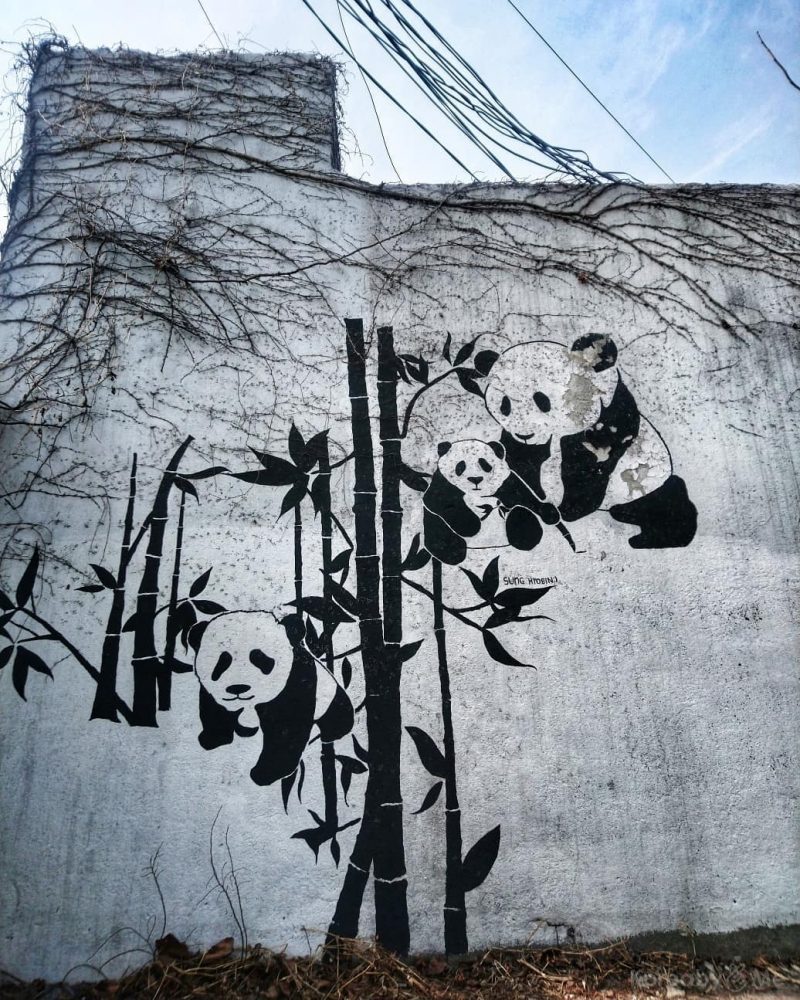 Again, as part of the ‘Art in the City’ campaign, many artists came to Ihwa to leave their mark. Currently, there are around 70 murals in the township. You’ll find these murals on walls, doors, windows, and benches on both residential and commercial buildings.

As you can see in the picture, the walls still look a bit old. However, the mural of the pandas changes how we perceive the wall. It’s still old, but it looks quaint rather than decrepit.

Apart from pandas, there are murals depicting people and other animals. For example, there’s one very popular mural, illustrating a father and a daughter (pictured below). Both locals and tourists appreciate the works and their significance. 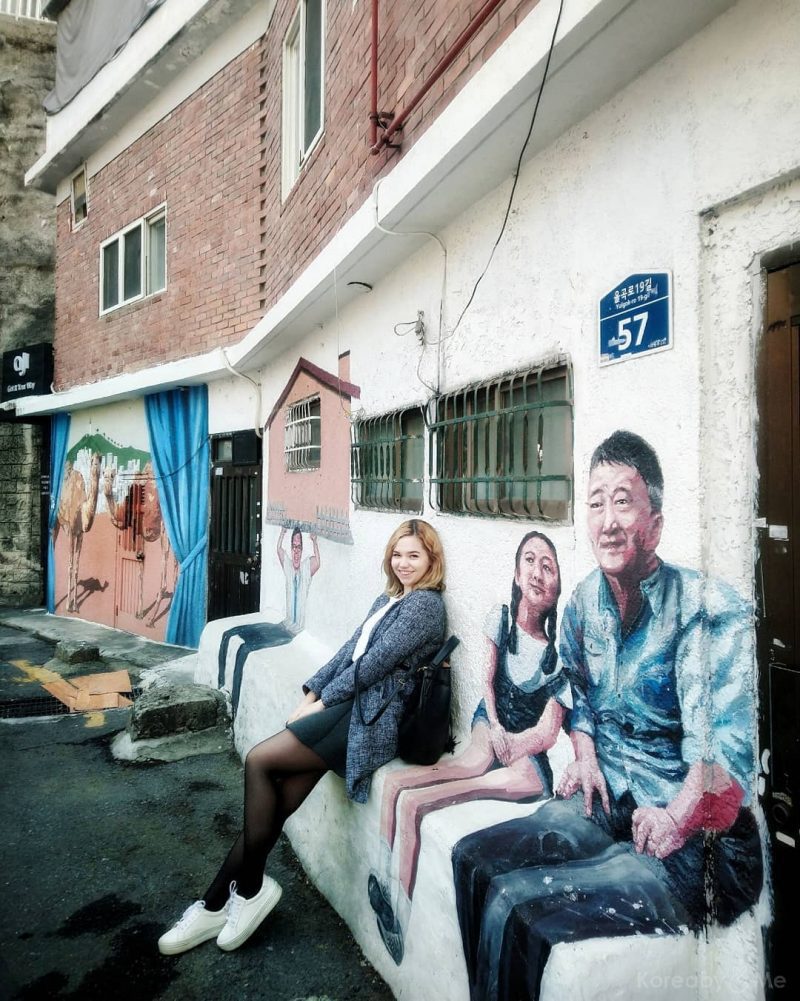 3. You Can Leave Your Mark on the Village 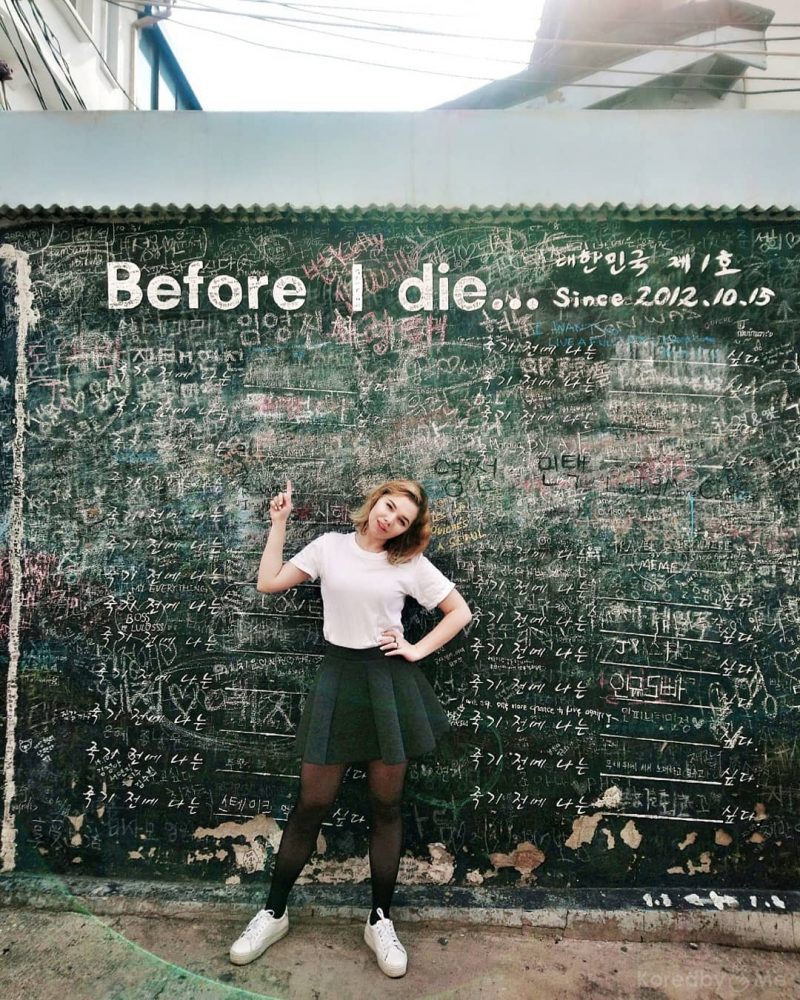 Some murals are more interactive, allowing you to put your mark on the neighborhood. For example, there’s this one near some of the older houses (pictured above). Since it’s a blackboard mural, you can take chalk and add your thoughts.

It’s very cool. You can add items from your bucket list, favorite quotes, poetry, etc. Essentially, the board allows you to hone your own creativity.

Similarly, there’s a post-it mural on the other side of the village: 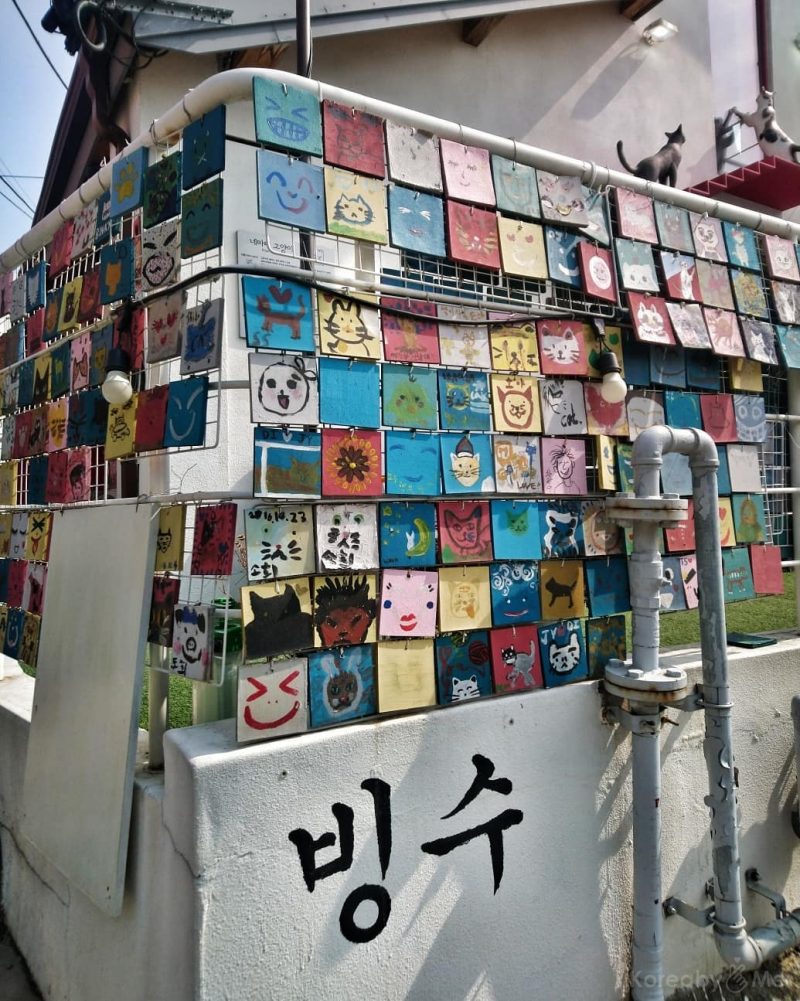 As you can see, most people have added emojis or cartoon imagery. However, you can add whatever you want, attaching it to the pins on the wall.

4. You Can Rent School Uniforms Here 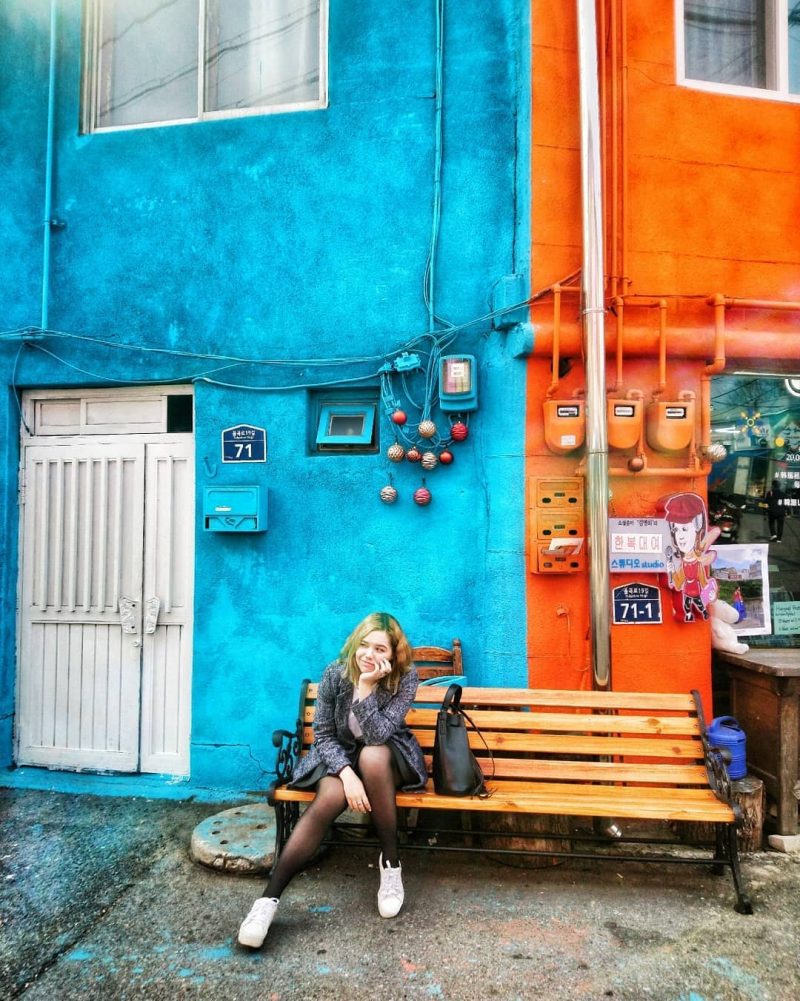 The museum commemorates the ‘Live Well’ school, where working-class refugee children studied from 1960 to 1987. The school only ever had 3600 graduates, before being forced to shut down.

When you go to the museum, you’ll see the various school rooms and displays. You can rent uniforms and take photos with each display.

It’s a very unique way of revitalizing the history of the school.

5. Ihwa Mural Village Is a Residential Area (So Here Are Some Dos and Don’ts) 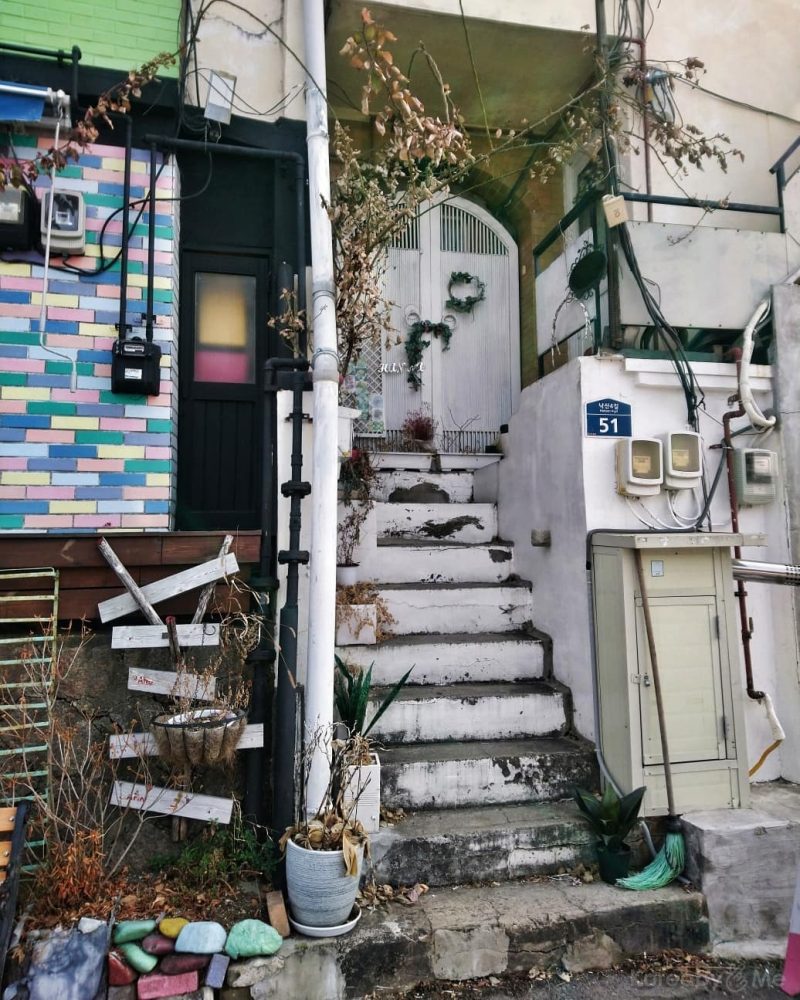 Lastly, you should know that the Ihwa Mural Village is still a residential area. Therefore, there are a couple of things you shouldn’t do.

For one, don’t go inside any open door unless there’s a sign permitting you to do so. Most of the murals are on the walls of residential buildings, so it’s easy to confuse art museums and cafes with people’s homes.

For another, don’t go to the neighborhood at odd hours. Since it’s a residential area, normal business hours apply. Therefore, it’s inappropriate to visit the locality before sunrise or after sunset.

However, it’s perfectly okay for you to walk around and talk to the locals. They know a lot about the area and its history, so you’ll have fun talking to them.

In sum, Ihwa Mural Village is a very trendy tourist spot. If you’re ever in Seoul, make it a priority to visit this area. You’ll get lots of Instagram pictures and learn more about local history and culture.

Do you need more suggestions on what to do in Seoul? Don’t worry. If you’re interested in hiking and mountain climbing, don’t forget to check out this travel guide to Gwanaksan, Seoul’s largest mountain range.