Today I want to share with you one of the must-visit cultural center in Daegu where the history is embraced  and old memories transcending time on the street of the past. 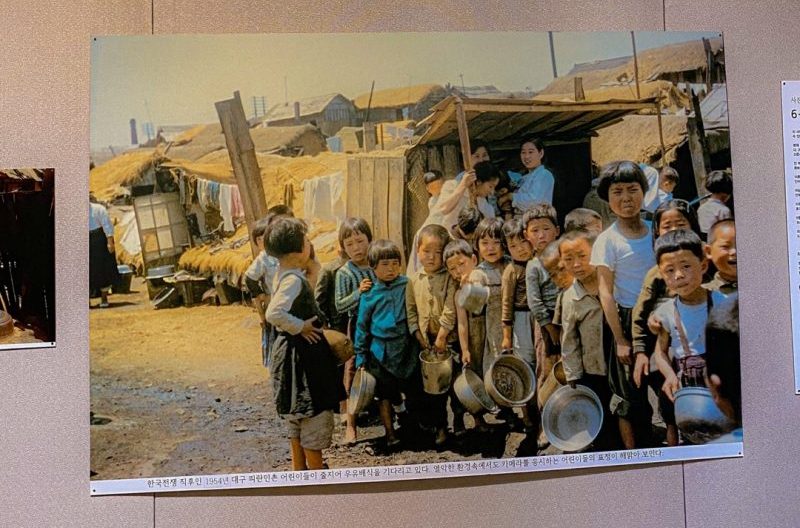 Hyangchon-dong used to be a remote area where an explosive warehouse of Daegueupseong Fortress was located. As Daegu Station was established as the center of logistics and transportation in the area and the Eupseong was demolished, Hyangchong-dong gradually transformed to the hub of the administrative, financial and commercial districts. After going through the Korean War, the area became a place to demonstrate the process of modernization as the center of economy and commerce as well as the hub of culture and arts in Korea. Referred to as “downtown” of Daegu until the 1970’s, Hyangchon-dong was the most busiest and most bustling commercial district full of tea houses, pubs and music listening halls.

The location of the Hyangchon Cultural Center is where Seonnam Commercial Bank, the first commercial bank of Daegu, was founded in 1912. In 1941, Seonnam Commercial Bank was merged with Joseon Commercial Bank, which supported the colonial policy. In 1950, the name of the bank was changed to Korea Commercial Bank, and the bank has been in business in the  current building that was built in 1976 until it was closed when it was merged into the Daegu branch of Woori Bank in 1999. In 2009, Jung-gu in Daegu Metropolitan city started developing an exhibition space to recreate the Hyangchong-dong area that was spiritual homeland of artists during the refugee days in the 1950’s to revive the depressed downtown and revitalize the local economy, and opened the Hyangchon Cultural Center on October 30, 2014.

Nokhyang is one of the oldest music halls in Korea which was opened in 1946 by Lee Chang-su in his own house located in Hyangchon-dong, Daegu. Starting with a collection of around 500 gramophone records and one gramophone player, the music hall was an familiar venue often visited by many artists, back then, who had fled to Daegu during the Korean War and served as the cradle of many artists’ works. The poet Yang Myeong-mun’s poem “Pollack” was also born in this place. The hall once suffered financial hardship, but was able to be sustained by the efforts of Daegu City’s senior musicians association holding a “50th Anniversary Concert of the Founding of Nokhyang”, etc. In July 2014, the family of the deceased Lee donated all the materials and equipment associated with Nokhyang to Jung-gu of Daegu Metropolitan City. As Hyangchon Cultural Center was opened later, Nokhyang was relocated in the basement floor of the building.

Because of the artists who gathered from all over the country during the Korean War, Hyangchon-dong was full of poets, writers, theatrical and movie people, and singers. Daegu in particular became the center of art in Korea when Goo Sang, Cho Chi-hun, Lee Jung-seob, Lee Sang-beom, Kim Dong-jin and Park Si-chun came down to the city. The buildings those popular artists of the 50’s and 60’s frequented still look as they did in the old days and the alleys they roamed to look for a drink during the war remain intact.

Bukseong-ro, the Foundation of Industry

Bukseong-ro is a road that was built where the north wall of the Daeugueupseong Walled Town was demolished. It was the bustling commercial center of Daegu during the Japanese colonial period, and it was where the main store of Minakai Department Store, which had the first elevator in Daegu, was located. After Korea’s independence, there were manufactures of hardware made from cans and drums from America army bases, and Bukseong-ro changed into a full-scale hardware street after Korean War.

Gyodong Market, the Livelihood of Refugees

Gyodong Market, which is also called Yankee Market and Dokkaebi Market, was established when a refugee village was formed by overseas Koreans who came back after Korea regained independence. Relief supplies and cosmetics from the U.S Army PX were actively traded when refugees descended right after the Korean War. The market was officially licensed to do business as Gyodong Market in 1956 and was prosperous until the 1980’s.

Tea houses in the 1950’s were important spaces and the living witnesses of the history of culture and music in Korea. The tea houses, music halls and bars of Hyangchon-dong were the hangouts of artists who were passionate about art and culture. Writers frequented the Monami and Sangnoksu tea houses in Bukseong-ro, and movie people often gathered in Galmaegi tea house.