If you’re a Muslim, finding halal food in Korea is a bit challenging. However, now that Halal Guys is a global food chain, you can fulfill all your falafel cravings in Seoul. Although Halal Guys, Korea is only recently launched, it’s quickly become a highly popular food spot.

South Korea does have some spectacular street food. However, if you’re craving something a bit more Middle Eastern, you can pop into a Halal Guys branch. Those who’ve never tried out this food truck are undoubtedly missing out. 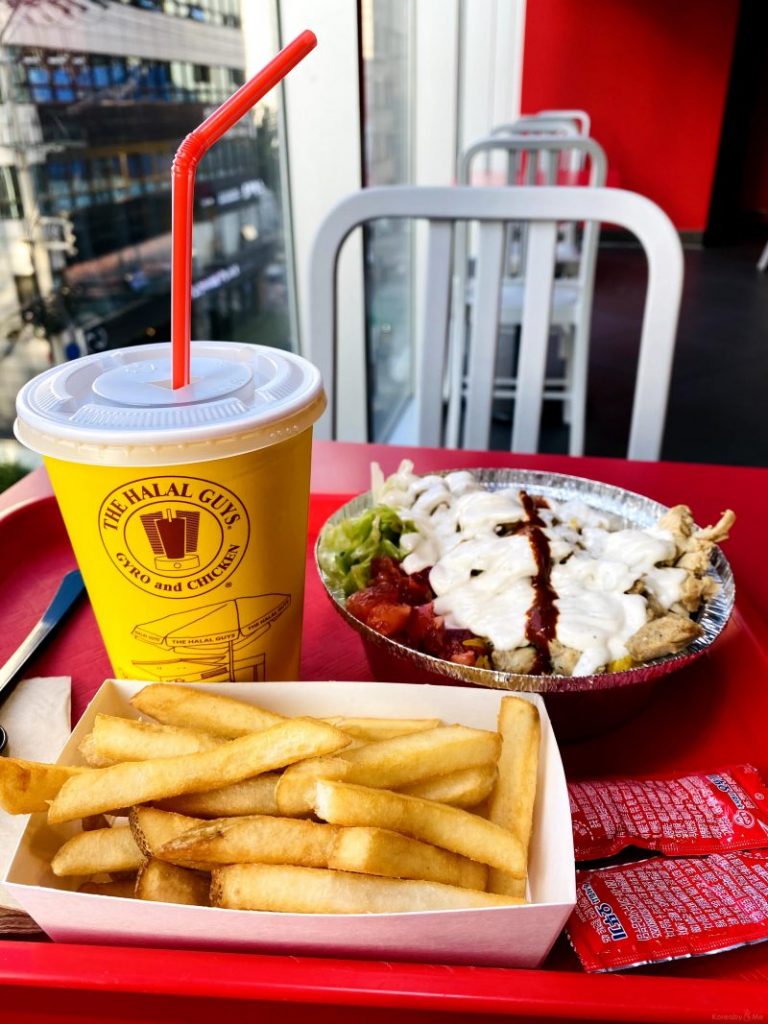 If you’re wondering what’s so special about Halal Guys, Korea, let’s talk a bit about the brand:

Table of Contents
The Brand Originally Started in New York City
The First Branch of Halal Guys, Korea Is Located in Itaewon
The Brand’s Signature Food Is the Falafel Platter and Sandwich
It’s a Good Option for Both Muslims and Vegans
Conclusion

Founded in New York City in 1990, Halal Guys is a halal fast-food chain. It began as a food cart, selling falafels and gyros. The founders, Ahmed Elsaka and Abdelbaset Elsayed, wanted to cater to the Muslim population in New York.

At the time, Muslim cab drivers did not have many options for their lunch as most local food carts would have meat or meat-based foods. After the launch of Halal Guys’ first food cart, the food chain primarily received cab drivers as customers.

However, eventually, the food cart gained more popularity, causing a significant decline in hot dog cart sales. Due to this success, the company became a franchise within its first year.

Currently, the Halal Guys franchise is spread across 200 locations in the US, Canada, Philippines, Indonesia, Malaysia, Dubai, and now Korea.

The First Branch of Halal Guys, Korea Is Located in Itaewon 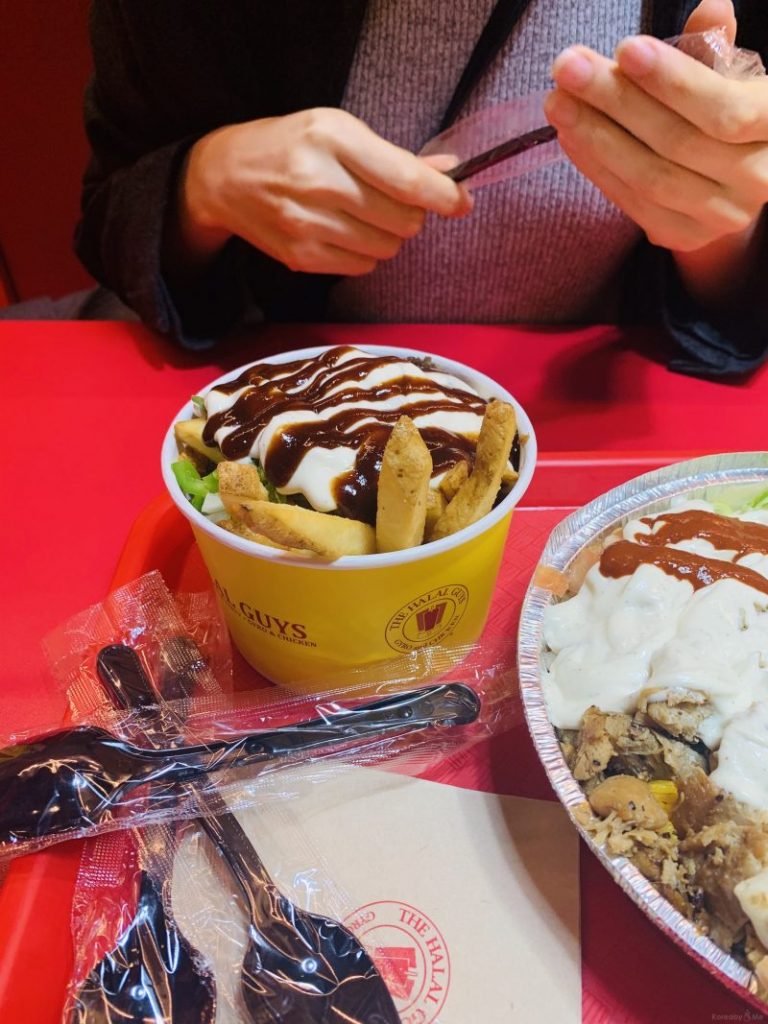 Halal Guys, Korea was first launched in 2016. The first branch was located in Itaewon, near Yongsan-gu. For New Yorkers living in South Korea, the food truck brought back a lot of nostalgic memories.

In this way, Koreans can experience New York and New Yorkers in Korea can have a bit of home with them. Moreover, the establishment of Halal Guys, Korea creates more diversity and options for tourists.

Consequently, it’s no wonder that Halal Guys, as a franchise, took off in South Korea.

The Brand’s Signature Food Is the Falafel Platter and Sandwich

Everyone knows Halal Guys sell falafels. However, what else is there?

The rice and chicken bowls are also very popular menu items. In Korea, one small platter costs around 7900 won. This is more than how much normal fast-food or street food costs. However, the portions are very big.

Even the smallest size is very filling for one person. The largest size, which costs 11,900 won, can feed around two to three people.

With every food item, you get a complementary salad bowl and pita bread. If you want, you can get extras added on. These extras include olives, pickles, cheese, french fries, etc. You also have your pick of sauces.

The spiciness of the sauces varies. If you like a lot of spice, you should go for the red hot sauce.

It’s a Good Option for Both Muslims and Vegans

As the name implies, Halal Guys food items are safe for Muslims. They’re certified halal, made with 100% halal ingredients. In regular restaurants, Muslims can’t each meat (chicken, mutton, or beef) because it’s most likely not been slaughtered according to Islamic rituals.

With Halal Guys, since the meat, sauces, and other ingredients are labeled halal, Muslim individuals don’t have to worry.

Similarly, Halal Guys is also a good option for vegetarians and vegans living in Seoul. Many menu items do feature meat or dairy. However, there are sufficient vegan options, including the vegetarian falafel platter.

There is also a wide range of salad bowls. If you’re a vegan looking to try something new, Halal Guys is a good fast-food option.

To sum it up, Halal Guys, Korea serves delicious food, catering to Muslims and New Yorkers in South Korea. It’s a must-try food experience, so those in Seoul should visit a Halal Guys branch.

Since the franchise still isn’t available in many countries, tourists flocking to South Korea may also enjoy trying the famous falafel platter. It would be very interesting to compare this franchise with traditional Korean street foods. 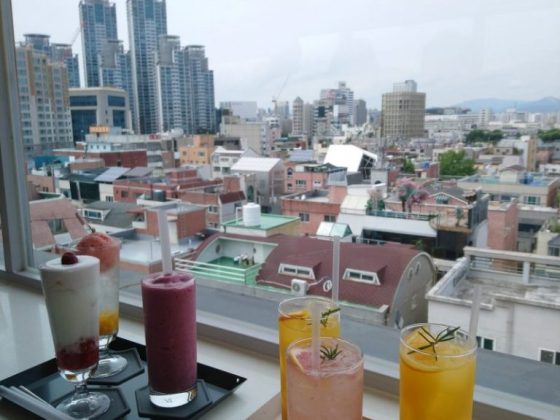 Why Is A-Plane Cafe Daegu So Trendy? 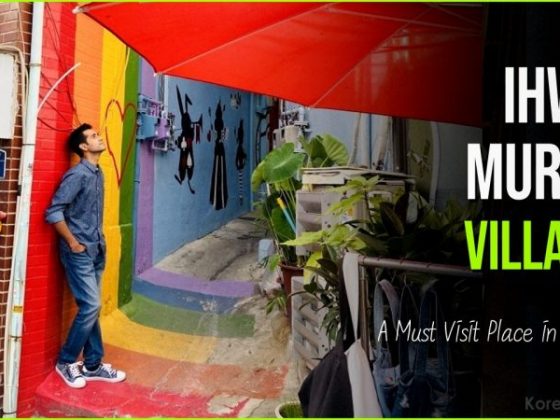