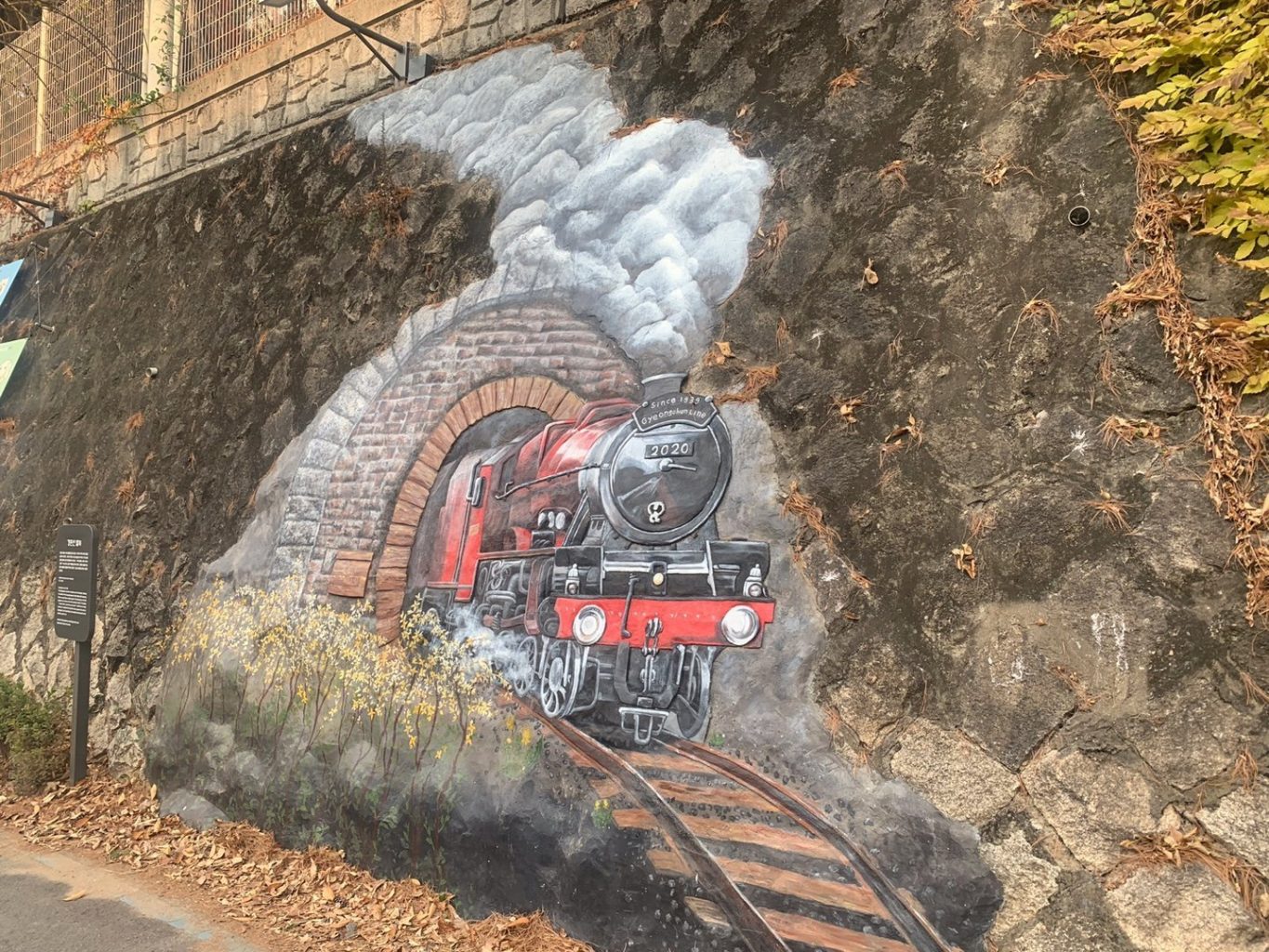 I’ve been staying in Korea for 4 years as a student and this is the first time I’ve heard of this gem in Korea. The places that I will be writing about is the Gyeongchun Line Forest Park (part 1) in this post and the Hwarangdae Railway park in part 2 of the blog which I will be linking at the end of this blog. This place is so low key and it deserves more light. Let’s get into it, shall we?

The Gyeongchun Line Forest is a 6.3km long railway from Kangwoon Univ. Station to the old Hwarangdae station. It’s operations come to a halt in December 2010 and was transformed into the Gyeongchun Line Forest Park that it is now thanks to the Seoul Urban Generation Project. Later it opened as a resting recreation area for its citizens and it’s taking its steps to be one of the best tourist attractions in the Gongneung-dong area.

I recommend you to go here during the autumn or spring! The Gyeongchun Line (Railroad) Forest trail, a trail that stands along the old railway is great for leisurely walks. It is also a popular spot to view the cherry blossoms, as a place where the start of spring can be seen.

As I mentioned before, it is a 6.3km long of a trail, so it’s perfect for when you just want a relaxing long stroll or a light exercise. When I went there, there were so many people who were just having their evening walks and some where even riding their bikes or electric boards.

SHORT HISTORY OF THE PLACE

Initially, the Gyeongchun Line was the first railway built using Korean capital during the Japanese colonial era and is preserved in its entirety. The railway is divided into three sections to regenerate the industrial legacy and develop a cultural walk path as a green welfare space. Visitors can walk or bike along the old railway that trains to Chuncheon traveled on to reminisce over past memories or enjoy a romantic walk. (source:visitseoul)

THE PAINTINGS along the railway

Here’s one of the paintings that I found really beautiful. It’s the “Nostalgic Lighthouse” It’s said that the lighthouse has witnessed so many sweet memories that are made on the Gyeongchun Line Forest Park over the years.

I find it very true as a lighthouse usually is tall enough to overlook things surrounding it.

I recommend you to really take your time on the trails when you’re strolling and stop to read the signs. You will really take away a lot with you about the place!

A collection of dog photos which I thought was quite random but it was fun to look at.

A sign that tells more about the Gyeongchun Line Train and its history. By the texts on those signs, I’m guessing it’s a place that means alot to Koreans especially to the older generations.

This is my favourite painting there. I’m guessing it is a painting to the train when it was in operation back in the days. The paintings there make a really good photo op as well!

At the near end of the railway, there’s a really cool restaurant that is recommended by many, I will introduce more about that in the part 2 of this blog!.

HOW TO GET THERE

This was honestly the highlight of the trip. Have you seen a bus like the picture below in Korea? When I was on my way to the Gyeongchun Line Forest Park, I saw this train themed bus. The model of the bus is just an ordinary bus that you can find anywhere in Korea but the exterior and interior is what catches my eye!

I love the design of the bus, they even got down the upper detail. Gyeongchun Line Forest Station is still a rising tourist attraction and it’s not that well known but the fact that they have a bus to match the theme of the place is really cool to me. That gives you another reason to visit the place, right?

If you zoom in closely to the picture above, you can see the interior of the bus. It has wooden seats like the old antique train seats. How cool is that?

Unfortunately though, I can’t remember what bus stop that was. But if you take a bus to the Gyeongchun Line Forest Park, there’s a high chance you might run into that bus. Or you could look up that bus’ number and try to catch the bus to any destination just for the sake of trying out.

Check out: bus.go.kr (Korean only)

Now, there’s a special place called the core of this Gyeongchun Line Forest Park, called Hwarangdae Railway Park. I’ll continue on that one the part 2 of another blog, click on the link below~!

Welcome Dental Clinic at Pusan Univer...
Arban Hotel in Busan
Downtowner: Most Popular Burger Joint...
The Garden of Lights - DPIRANG, Tongy...
Werebear of Gomanaru Pine Forest
Korea for All Seasons: When is the Be...
Best Cafes in Jeju with an Ocean View
Oryukdo Skywalk and Oryukdo Haemaji P...
Total
872
Shares
Share 872
Tweet 0