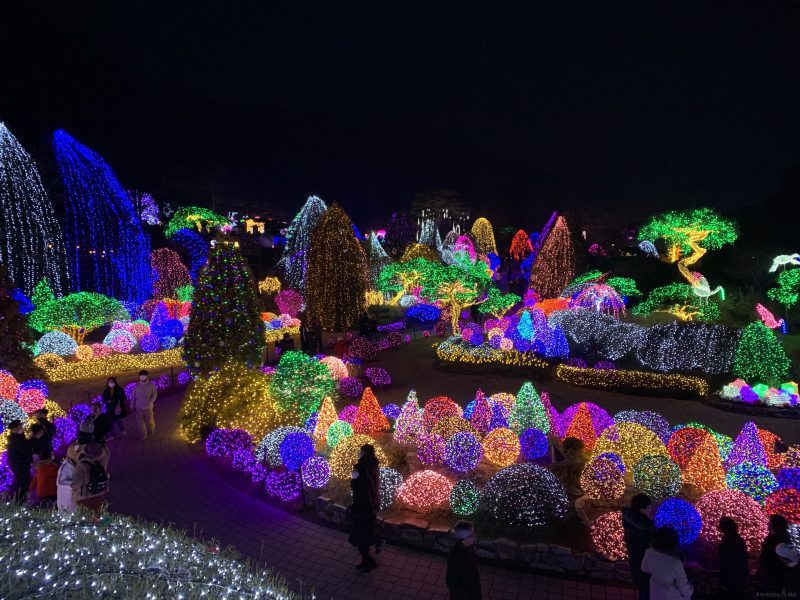 Lovely scenery on a winter night

Garden of morning calm (아침고요수목원) is one of the most fabulous botanical gardens in Korea. It works all year and depending on the season, there are different kinds of festivals and specific exhibitions. But actually, it does not matter what time of the year are you going there, because the Garden of morning calm has a spectacular view during all four seasons. And today I am going to present to you the garden in the winter season. So, if you have not yet been there and think about where to go on a cold winter evening, then do not hesitate about taking a ride to this botanical garden!

How to get to Garden of morning calm

First of all, the Garden of morning calm is situated in the Gapyeong district at the Cheongpyeong metro station. Only 2 hours or even less from Seoul. It is Gyeongchun Line, but you can buy a ticket on KTX/ITX from the Cheognyangni station. It will cost 3800 won and take around 35 minutes. Obviously, taking a subway is not complicated at all. On the contrary, it might be inconvenient to go from Cheongpyeong station to the garden itself. Provided that the garden is surrounded by mountains and located relatively far from the highway, the bus does not seem to go often. That is why, the only way is taking a taxi, which costs around 15,000 won.

A little bit about the history

The Garden of Morning Calm was opened on May 11, 1996, by professor San Kyung Han. And the name of the garden was originated from an Indian poem, where the author called Korea “The land of morning calm”. The main intention of establishing this private garden was a desire of San Kyung Han to show the beauty and uniqueness of Korean nature, oriental grace and spirit of the nation worldwide. An enormous number of different flowers and trees is organized and blent together in harmony. That attracts a lot of tourists to visit the garden annually.

Below I list of the entrance fee prices for an individual:

I could recommend you to check the prices on Naver and book it there in advance, it might be cheaper.

In case you enter with a group (more than 30 people), then you can get a weekdays discount and it will cost cheaper in 1000 won.

So we arrived at the garden around 5 pm and looked around for while before the Lighting Festival has started. Before entering the garden we ate hotdogs and took some coffee directly in front of the entrance gates.

The Lighting Festival (오색별빛정원전) in The Garden of Morning Calm starts every December and ends around February-March. It is one of the biggest festivals in Korea, when more than 30,000 lights are illuminated.

As it starts darkening, the lights begin to turn on. Here are some photos before festival started.

Finally, when all the lights turned on, it was like true magic. Every single tree was decorated with lights. By the way, all the lights used in the festival a LED, which is considered to be eco-friendly.

There were lots of paths and gates. But in the dark night, when everything around is dazzling and sparkling, I completely lost my way and just followed my friends. It was hard to understand where are we and where should we go.

Especially, the place I liked the most is where the church was located.

It was an absolute miracle, we felt like the angels were flying around. In addition to the lighting, they turned on a beautiful melody, which completely gave us the atmosphere of a dream.

Look at these tiny mushrooms! There are so adorable. Are gnomes living there?

The next breathtaking spot was a blue sea with a boat.

It really looked like the sea… in the space.

The garden is huge! And after an hour of walking and taking photos, we started freezing and entered a cafe called Good Morning Coffee. You can have a hot coffee or tea, take a break, have a talk, and then go further. 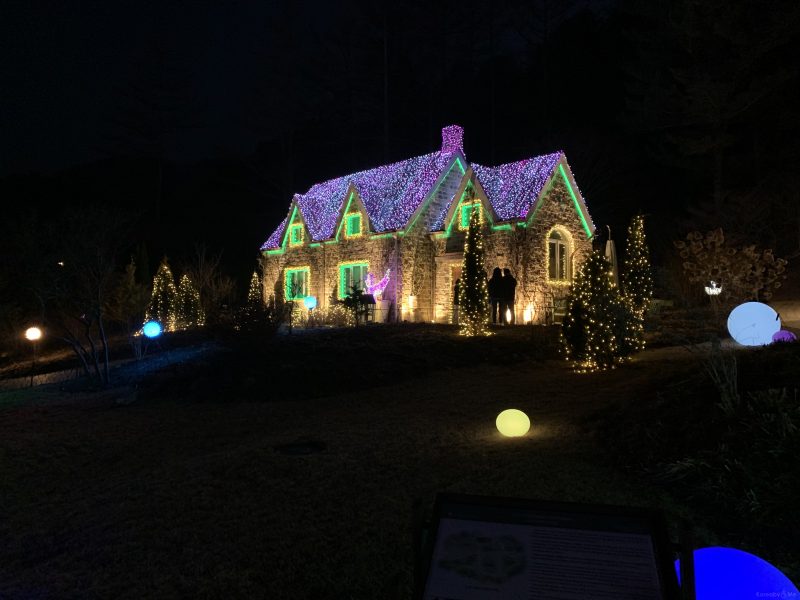 Now, after we warmed up, what do you think about cozy-looking Gingerbread house and a cute lighting bear?

I will show the last and the most majestic photos.

To sum up, we experienced a marvelous atmosphere of being and living inside of a fairy tale. How great is it, turning back into childhood and start believing in miracles? Overall, It was a lovely trip, which gave us a wonderful Christmas mood. I would like everyone to go there once before Christmas. But make sure to put on warm clothes and prepare hot coffee!

How to Rent a Car in Korea (For Forei...
10 Reasons You Should Watch Twenty Fi...
Aegyo, Bulgogi and Chimaek: Konglish ...
Hair loss in Korea
Craving For Turkish Food in Korea? Pu...
A guide to winter street food in Kore...
Mangwon in A Day: My Favourite Area I...
Basic Korean Phrases You Should Know ...
Total
1K
Shares
Share 1K
Tweet 0