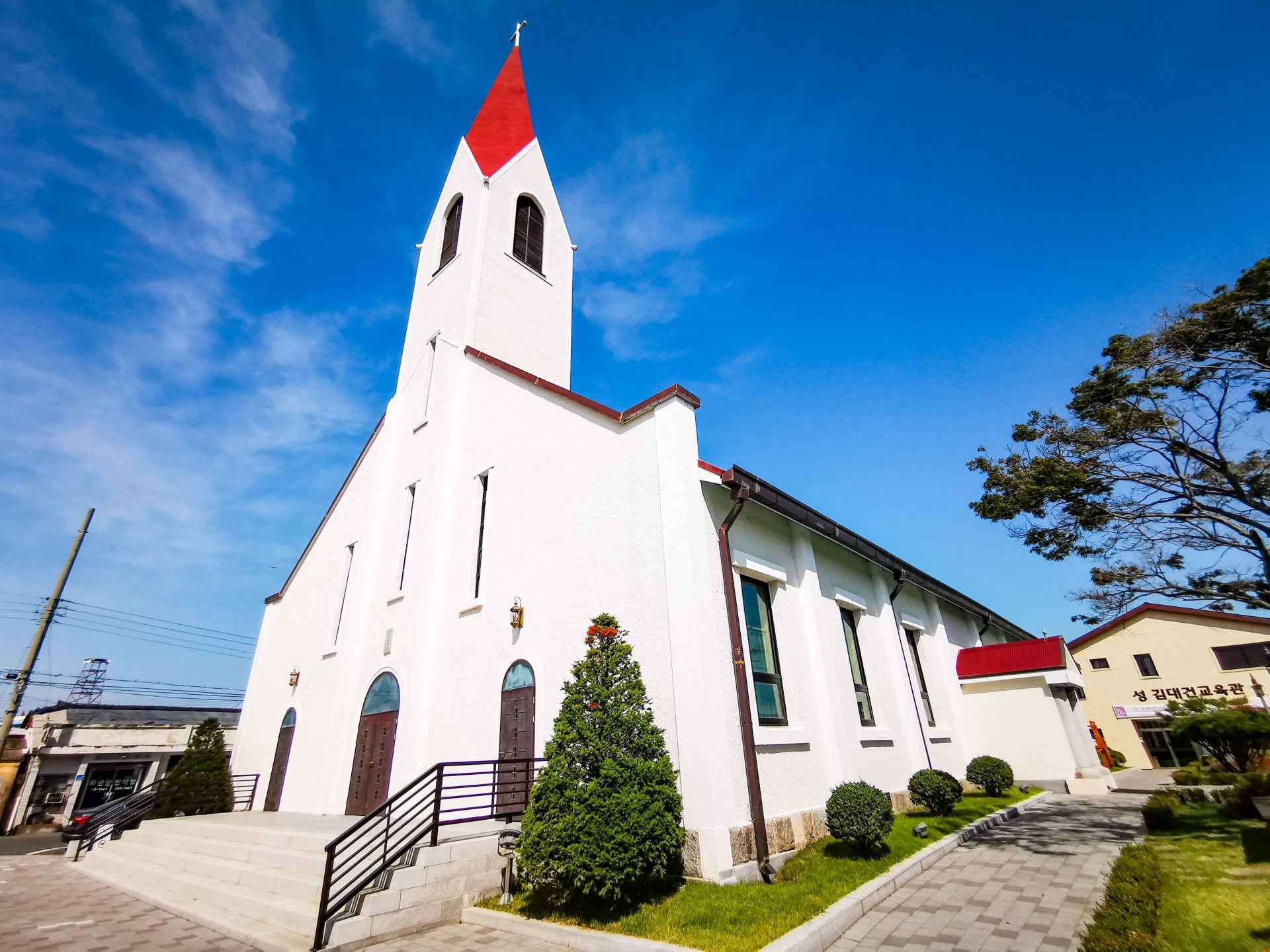 With its beautiful architecture inspired in Romanesque and Gothic styles, Ganggyeong Catholic Church stands out from other cathedrals of the area. Here, you will not only be mesmerized by the beauty of this building, but also you will get to learn about Father Kim Dae-gun. Who was the first Korean Catholic priest and martyr.

So now, get ready to learn why this church is important!

Ganggyeong Catholic Church was built on February 13, 1961. Designed by a French priest called Emile beaudevin (1897-1976). Who came to Korea in 1926 as a missionary of the Paris Foreign Church. He directly supervised the construction as a person with a deep knowledge of architectural technology.

After some time, this church went through changes. Now instead of Ganggyeong Cathedral, it is ‘Ganggyeong Seongjisungdang’. That is why there is a sailboat-shaped sign made of stone at the entrance of the cathedral.

The French priest and architect modeled this cathedral after a ship. In fact, it is easy to notice due to the high ceiling. As it gives a triangular shape. Which is a simple characteristic that every ships’ structure used to have. Being one of the details that also make Ganggyeong Cathedral stand out: its peak arch. By its sharp angle, makes us think of a Gothic style.

Maybe some people think that this church does not look unique at all. But let us not forget that we are speaking of Korea. A country with a completely different architectural style. That is why it is not surprise that these type of buildings become cultural properties. Plus they were established in order to bring a ‘new religion’ to the country. How could it not be of high value?

Unfortunately, in my case I was not able to see by myself how it looks from the inside. Despite of being opened, I chose to not disturb the people who were actually praying. As I went on Sunday. A day that many religious people use to pray.

The exterior is also shaped as a ship. But the highlight surely is the three-sided bell tower. Which is centered over a Rhenish helm. Typical of the Romanesque style. Due to this, this church catches anyone’s attention from distance. As it stands out among the other buildings from the area.

The main entrance is a piece of art as well. With a beautiful steel door that gives it a majestic look. It indeed reminds us of how churches were portrayed in old movies. Undoubtedly, nothing beats the architecture styles from back then. And to enhance its beauty, there is a window that has the shape of half moon. Divided into three pieces to add a uniqueness to this style.

Of course, this entrance protrudes toward the priest’s hall. Which is one of the details that I like the most. That along the triangle shaped ceiling, it gives you a sense of importance as you walk in.

It is worth to mention that this building is well maintained. Giving high architectural and religious value to it.

Especially due to the fact that it was constructed during the surge of modern architecture.

Another thing that caught my attention, is that there is another entrance on the side. In which you must take out your shoes to enter. While I do not know what type of room is in the other side, I surely find interesting how they integrate their culture with the religion.

Of course, a church would not be complete without its religious statues. Not only to honor these saints, but also to let people pray among the nature.

As we mentioned before, this church went to several changes before becoming what it is now. But the most noticeable is the creation of ‘Father Kim Dae-gun’s Memorial Hall’. Where they show us the relation between Father Kim Dae-gun and Kang Kyung. So as the history of Ganggyeong.

In summary, Father Kim Dae-gun was the first Korean Catholic priest and martyr. Who was canonized by Pope John Paul II during his visit to Korea in 1984. That is how he became a saint. After following the hardships of Jesus by climbing the Golgoda Hill until returning to Korea.

After that, Ganggyeong became the starting point of the pilgrimage course. Plus, Father Kim Dae-gun took his first step on the Korean Peninsula through Hwangsan Mountain in Ganggyeong at 8 P.M, on October 12, 1845.

He then stayed in Ganggyeong for about a month and engaged in pastoral activities. That is why this cathedral was declared the ‘Primary Pilgrimage Site of Father Kim Dae-gun’.

And now, this part of history is awaiting to be discovered by you in this memorial hall.

Nature is Here to Accompany you in Your Prayers

The green areas of this place surely enhances the overall beauty of the cathedral! It somehow gives me a sense of comfort. Just imagine finishing your prayers and being able to just lay down in front of the church. In that green field, along the shade of a tall tree.

As expected, there are some benches in case you want to take a break. Or just enjoy the nature after you are done with the mass.

Something that caught my attention were indeed these rocks engraved. Which show us some scenes from the Bible. Are not they not magnificent?

From Nonsan Station, you can take bus no. 101. And wait for 19 stops. To then get off at ‘중앙초등학교’. From there I would advise you to use a map. It is actually only 6 minutes away on foot, but can be confusing as it is a neighborhood.

Ganggyeong Catholic Church is surely stunning. As it portrays the architectural style that was popular back then. Plus it was built by a French priest and architect.

Have you ever been to Ganggyeong Catholic Church? What did you think? Let us know in the comments below.