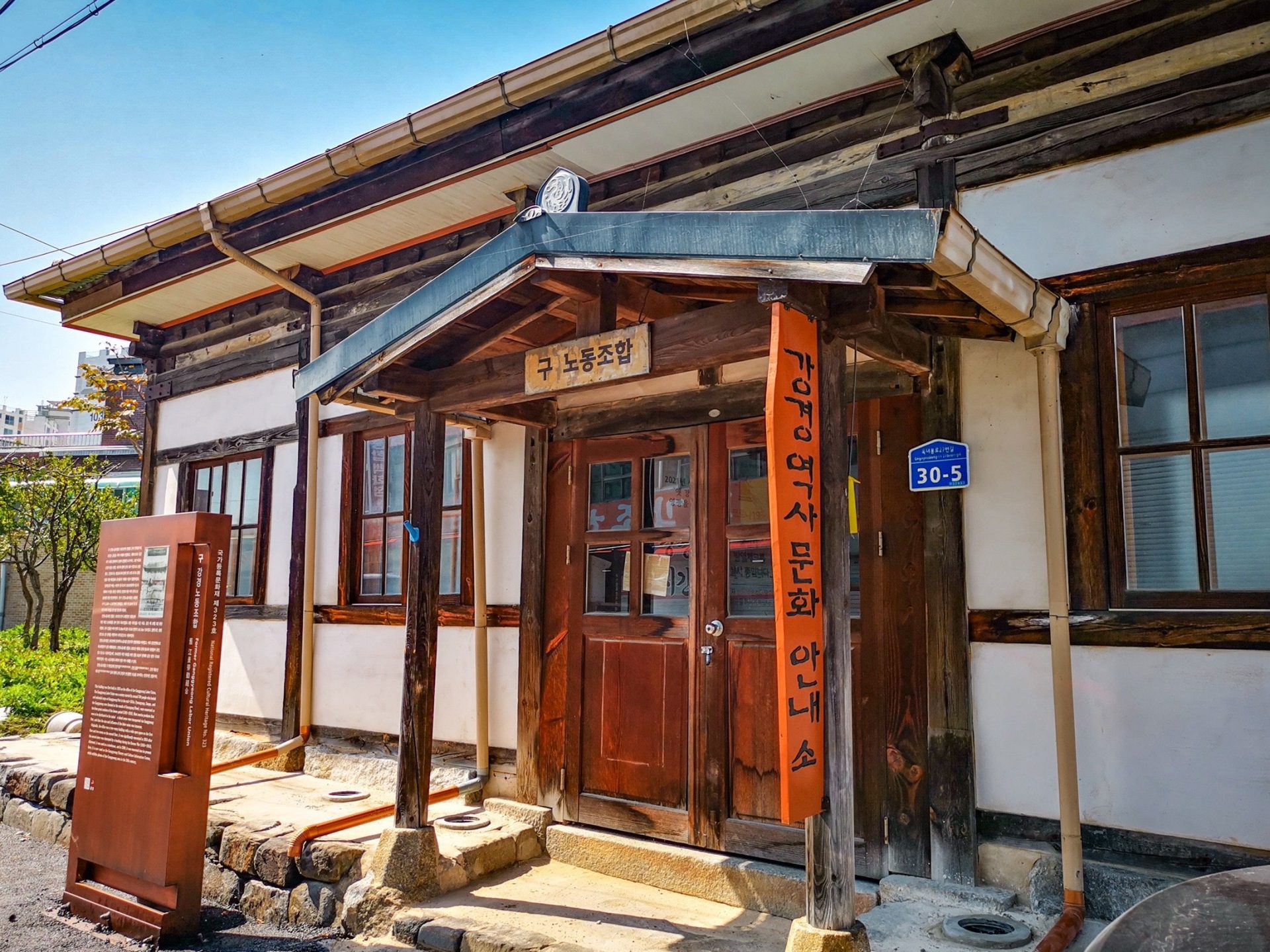 Former Ganggyeong Labor Union: The Rise and Fall of Ganggyeong

The Former Ganggyeong Labor Union is one of the modern cultural heritages in Ganggyeong-eup. A two-story building where in the past an association was formed to protect the rights and interests of more than 200 docks employees in Ganggyeong Port. As it was a nationwide commercial district that would gather tons of agricultural, marine and industrial products. Thanks to the development of inland water transport.

But now, it operates as an information center and museum that shows us that part of history through a summarized exhibition. Attracting visitors mainly due to its beautiful architecture that remains intact!

Without further ado, let us introduce you this place in depth!

In the 1920s, the distribution of various marine products to inland areas was carried out nationwide through Ganggyeong port. Which was the largest port in the country after Wonsan. Where about 100 merchant ships used to come and go on daily basis. Due to that, it is not surprise that during the Japanese colonial era it became an outpost for exploitation of seafood, rice, cotton and agricultural goods. Later expanding its power to fishing activities.

The fact that it became second biggest market during that period, of course led to labor exploitation. That is why in 1925, the Employee Friendship Association was formed to protect the rights of more than 200 dock employees in Ganggyeong. Later becoming the Ganggyeong Labor Union despite the oppression of the Japanese Police.

Now, it operates as the Ganggyeong History and Culture Information Center. Which show us photos of the area in the 20th century, through its exhibitions. On the other hand, they introduce us the modern culture of the city Nonsan. Where Ganggyeong-eup is located.

As we mentioned before, it became a small museum. Which teaches us about this part of history through a summarized exhibition. There, you cannot only see old pictures. But also read books that talk about the past and introduce us the modern culture of this area.

Despite of just being a single-room, it should not be underestimated. As you can find valuable information. Especially about this part of history that remains unknown to many people. Since this is a non touristy city that it is not usually visited for tourism purposes.

The History of Labor Union

Through a timeline of old photos, they show us the fall and rise of Ganggyeong. Leaving us impressed on how an area can change overtime. But in my opinion, it might have only changed when it comes to commerce. Because when we talk about the development and renovation of the area, it is hard to believe that it is not the 1930s anymore. As for how many old buildings can be found.

But that is not a downside, of course. Since it makes you feel as if you were walking through a whole museum when strolling along the streets. As you can discover lots of hidden gems that make this town very interesting. Especially due to the contrast of antique structures with the new ones.

It is worth to mention that originally, this building had two stories. But the second floor collapsed due to the negligence in management. Specifically, it was destroyed after being bombed during the Korean War. And then used as a storehouse.

Now what remains is the first floor. Which was renovated in 2009 into its present form.

Despite that, the building still beautiful in terms of architecture. With its Japanese wooden structure and its size of 5 bays in front and 3 bays on the side. So as a small roof protruding from the center. It is hard to believe that back then the total cost of the project was 5,000₩. Crazy, right?

As expected, they took the chance to start promoting Ganggyeong as a historic town. Even if it has not reached its peak when we talk about tourism, at least they have started to provide us information on why this area is so important. Which I am pretty sure, that little by little, will rise the interest of outsiders. Especially those who love history.

In the map, they have pictures of some important sites in Ganggyeong. Which some of them are considered as cultural heritage. The best thing is that you can visit all of them just by walking. As they are not far away from each other.

The fact that a city is historic, does not mean that they should be always trapped in the past. That is why they have some contemporary books that teaches us about the actual culture of Nonsan. The city of Ganggyeong-eup.

They do not only have books about culture, but also about the modern history. It was indeed surprising to see how big these books are. I believe that anyone could spend hours and hours to finish them! As far as I saw, they have precious information.

So if you want to read them, do not worry! They have some seats for you to stay and sumerge yourself in the old times.

As I mentioned before, the architecture of this place is stunning no matter where you look at! So I deeply recommend you to see around it. Because it is hard to believe that this is an old building. When it seems to be intact! Just look at how neat it looks like.

Plus, there is a park outside. Which is the perfect spot to rest after a long walk! As it is better to tour this town by foot. Because all of the important sites are close to each other.

But that does not mean that one would not get tired. Since when we do the sum of time that it took to tour the whole area, it is not few hours anymore.

From Nonsan Station, you can take bus no. 101. And wait for 19 stops. To then get off at ‘논산경찰서’. From there I would advise you to use a map. It is actually only 7 minutes away on foot, but can be confusing as it is a neighborhood.

One thing I love about South Korea is how hard they try to preserve their history. Because the fact that a country has development in terms of economics and technology, does not mean that the past should be erased. Rather it should be exposed as a strong proof of how far they have come as a country.

The Former Ganggyeong Labor Union definitely met my expectations. I am pretty sure that I could stay hours there and read all of the books that they have to offer. Believe me, the information that they provide is valuable.

Have you been to the Former Ganggyeong Labor Union? What did you think? Let us know in the comments below.