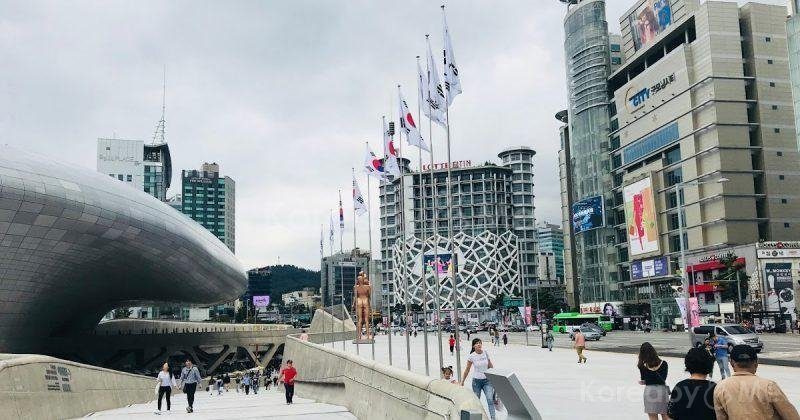 You may have known Seoul for its various urban places to visit such as the N-Seoul Tower, Starfield Coex Library. And there is also the greatest football stadium called the Football Fantesium of all times, for football fanatics. But Dongdaemun Design Plaza is just something else! It’s also known as DDP, one of the biggest urban achievements of Seoul.

It’s a neofuturistic design which is characterized by the “powerful, curving forms of elongated structures”, as told by the press. This is one of the most iconic fashion hubs for people from all over the world. We will tell you all about this down below, stick with us!

You may not know but this was built by British Iraqi architect Zaha Hadid who has basically won the 2004 Pritzker Prize. Hadid came up with the concept of “Metonymic Landscape.”  Hadid tried to build this considering the scene of the landscape of Seoul City.

Since for South Korea cultural diversity is a big deal, the purpose of this Dongdaemun Design Plaza, as you can tell by the name, was solely for the cultural hub in Seoul. And Seoul is the historical district of South Korea. Not just this but it’s also Korea’s largest fashion district.

By the way if you are in Seoul for just one day, don’t forget to check out this 1-Day Seoul Itinerary.

The DDP looks like a plaza that keeps in mind the flow of liquid and allows flexibility in space, quite unique, isn’t it?

What you can do at DDP

So the question arises, how did this plaza come into existence, what’s the name story behind it all? We have the answers to these FAQs. To answer the first, the name comes from the district Dongdaemun-gu. A wall was built to protect Hanyang; capital of Chosun. But later because of war, expansion and rapid development, this wall was destroyed.

Firstly it was demolished in 1908 for the Japanese prince. There was a complete reign of Japanese Emperor Hirohito’s  until 1924. But then later in the 1960’s, the Dongdaemun commercial area started developing by the efforts of its people. Pyeonghwa Market in Dongdaemun-gu was formed and it became the largest shopping district soon.

Later Hadid appeared and started to function at the Dongdaemun Stadium in 2005 and eventually, Dongdaemun Design Plaza became of great interest.

Building Information Modeling as well as mega-truss (extra-large roof truss) system. It means there’s an insanely large rooftop where walk-able parks are made on its roofs. Not just this but large global exhibition spaces are present as well as futuristic retail stores.

Another fascinating thing about DDP is that restored parts of the Seoul fortress are there as well. And the space frame systems are the key features in terms of creating grand-scale spaces of this plaza.

You know when there are some plazas or buildings where you can tell exactly, for sure how they are from guessing them from the outside? Well, this plaza isn’t one of them. Quite frankly, it depicts something else from the outside and once you enter, especially the rooftop, it’s beyond mesmerizingly beautiful.

What to expect at DDP

When you first stand before it, you’ll see it as a mushroom-shaped smooth structure that makes it look like its floating in the air, above the ground. The exterior is made of concrete, aluminum, steel, and stone.

The interior is designed with plaster which is reinforced with synthetic fiber, acoustic tiles, acrylic resin, and also, stainless steel and polished stone. It’s beyond amazing to see all of these materials combined, even if you don’t have an architect’s eye, you’ll still be surprised at the inner and outer beauty of Dongdaemun Design Plaza.

This plaza has got public spaces such as an exhibition hall, conference hall, design museum, the design lab, the academy hall, media center, seminar room. Not only this but Dongdaemun History and Culture Park is also in it. DDP includes the designer’s lounge, and the design market. Open 24 hours, the design market is multipurpose space not just shopping but cultural events as well.

And if you go there on a date, don’t forget to watch this LED Flowers Garden 🙂 It is so romantic and looks so magical.

Share with us your pictures when you go there, here are some pictures from us to increase your interest!