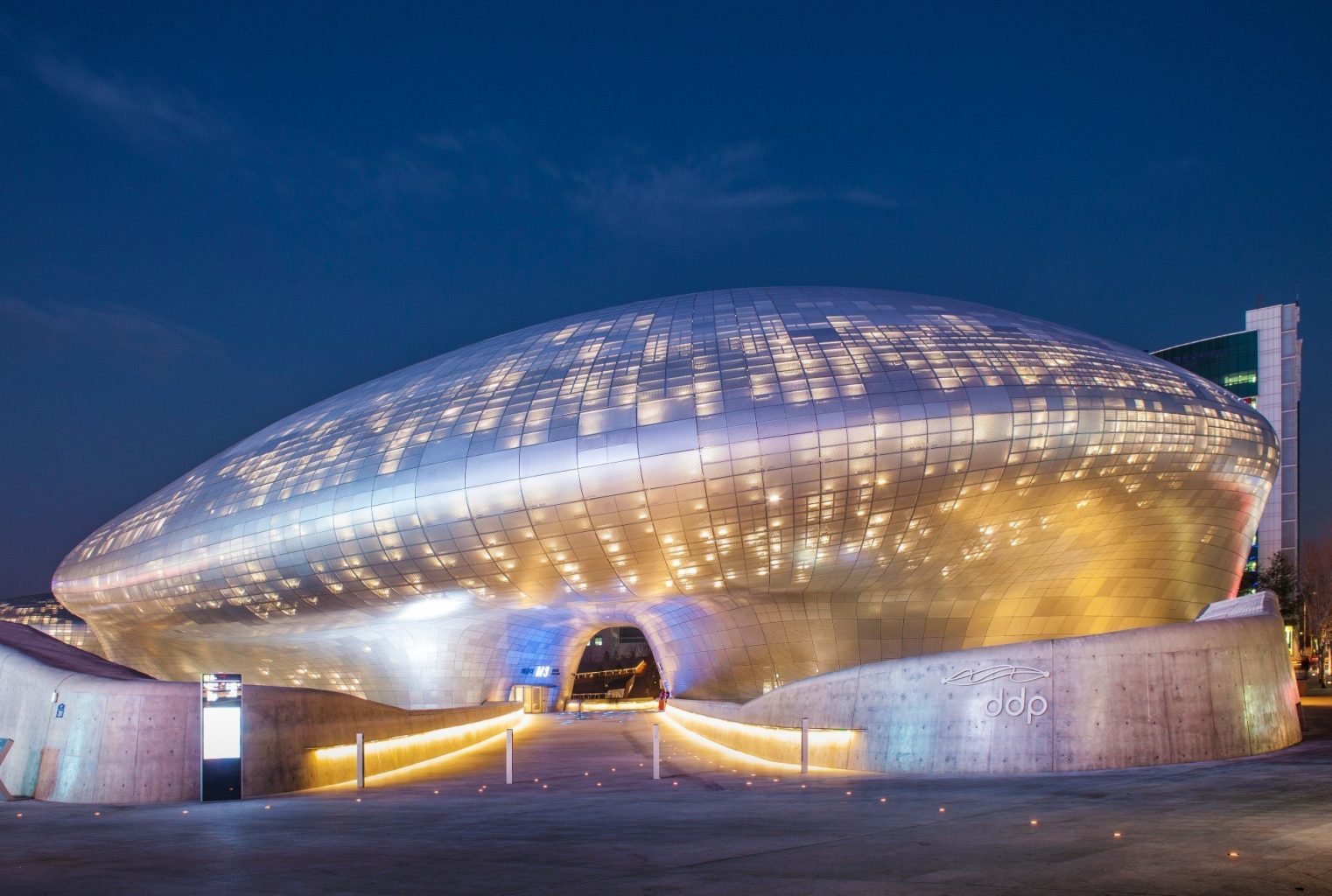 “Breaking news: This morning Korean capital city of Seoul and all of Seoul residents became witnesses to something quite unusual. A giant space ship landed in the Dongdaemun area.“

I guess this was the head title of all tv news in South Korea when on March 21, 2014, the Dongdaemun Design Plaza was officially inaugurated.

If you have ever been to Dongdaemun, you have probably seen this amazing building. But for those of you who are about to explore this place, carefully read what I am about to tell you. 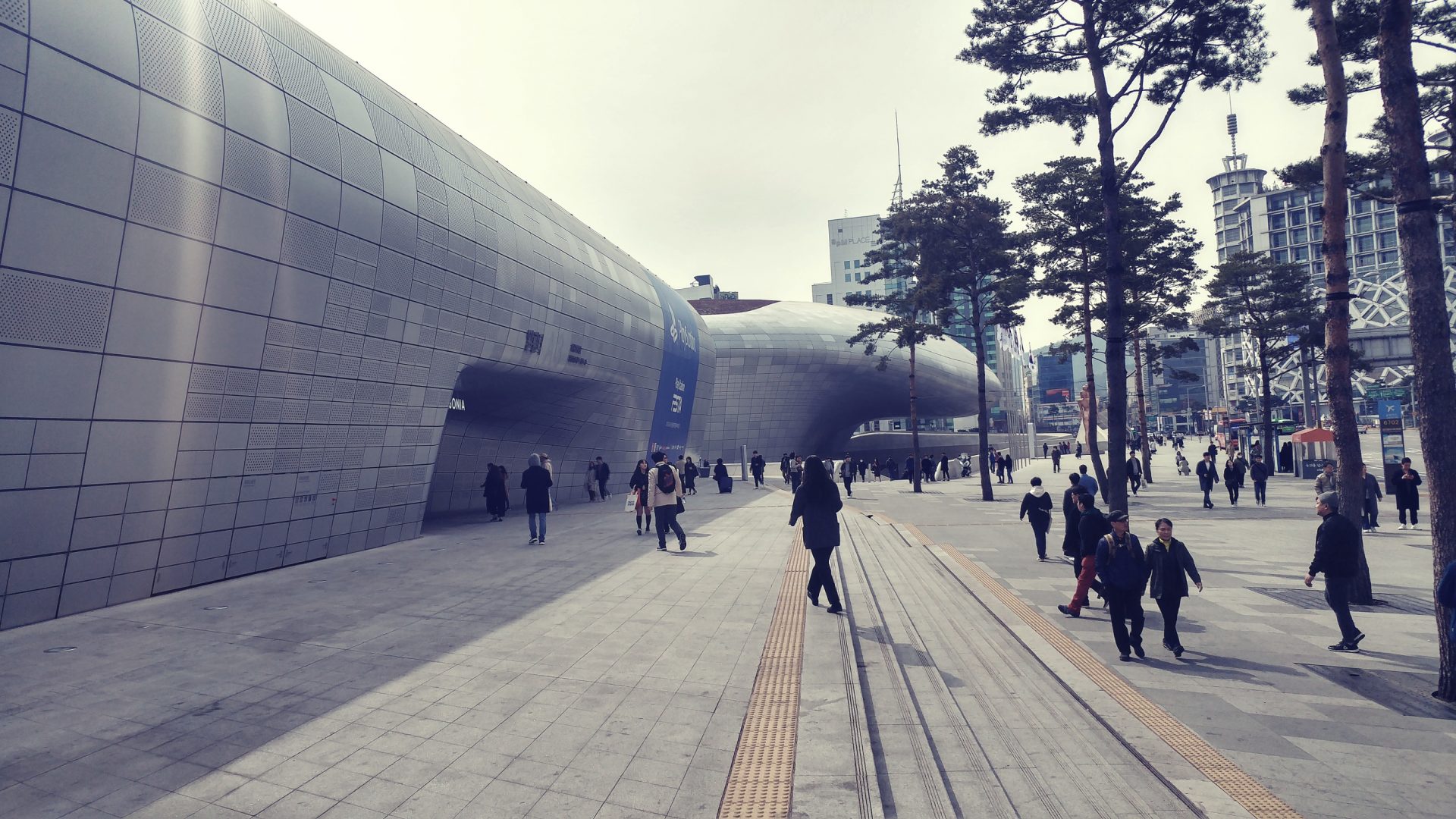 Table of Contents
DDP… What ?
Landed on what?
The stadium
Shopping center since the Chosun Dynasty
The history preserved in DDP
What a building
Outside
There is also…
And in the evenings
Should I use a bout or a ship?

Dongdaemun area is well known for its shopping malls and office buildings. The Dongdaemun historic park, and the DDP are also here.DDP stands for Dongdaemun Design Plaza. Its other name is “dream, design, and play.”The building is known for its Futuristic architecture and the variety of activities that it offers.

Once upon a time there was a fortress wall around the district of Dongdaemun. The wall was built to protect the Hanyang ( the capital of Chosun ). However because of the war and the rapid development and expansion of the city the wall was damaged and destroyed. The first demolition was conducted in 1889. The reason was the construction of the trolley railway between two areas of Seoul, Seodaemun, and Cheongnyangni. In 1908 the wall near the Dongdaemun was demolished during the visit of the Japanese prince, and a wall connecting Dongdaemun and Gwnaghwamun was destroyed to build Gyeongseong Sports Complex.

This was the first modern sports facility for athletics, baseball, tennis, and swimming. From 1925 until its demolition in 2007, various national sports and celebration events had been held. After the Seoul Olympics in 1988, the stadium was abandoned and become a local market. With the time Dongdaemun Stadium became shabby and deteriorated. Same thing happend to the surrounding downtown area. That is when the Seoul Metropolitan Government decided to take an action. They demolish the stadium and establish the Dongdaemun Design Plaza (DDP).A multi-complex center for the design and fashion industry and a history and culture park for citizens and visitors.

Shopping center since the Chosun Dynasty

The area around DDP currently has a lot of commercial buildings, but do you know that this area has kind of always been a commercial one? The commercial area here developed in the latter part of the Chosun Dynasty when people started to create an autonomous market place around Baeogae.Later Gwangjang Market was formed, and the district became a constellation of various markets and small businesses. In the 1960s, a large number of sewing factories were built near Pyenghwa Market, Dongdaemun-gu, and the market soon became the largest shopping district. In 1998 the Miliore shopping mall was build and the area became a new retail sphere where citizens and visitors of Seoul buy the latest fashions at a reasonable price.

The history preserved in DDP

The DDP is an art gallery design complex that has numerous spaces and rooms for outdoor performances and conferences. An interesting fact is that The Dongdaemun Design Plaza is home to the Dongdaemun History, Culture Park, and the Dongdaemun Relic Area 2. Part of the archeological finds have been discovered during the construction process of DDP.  The building design was slightly changed so that they can integrate the new artifacts into the area.

This amazing futuristic architecture houses a museum, a kid’s playground, a gift shop, and an underground shopping mall. But wait, there is more.

The Dongdaemun Design Plaza also is home to eateries, coffee shops, art, gigantic sculptures, and a green rooftop park, which is home to a rose garden with a total of 25,550 LED roses. 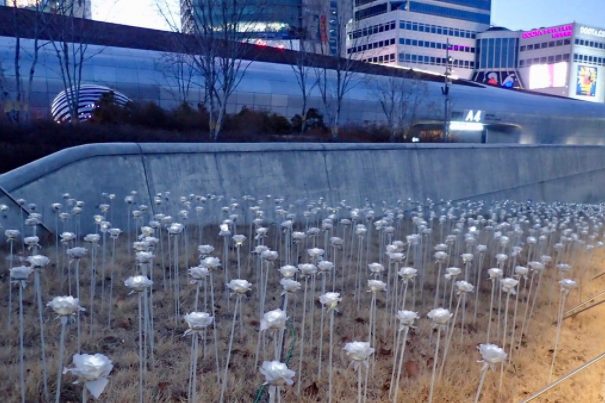 Before you get to the heart of the building, there is a big plaza and a walking ramp, which offers great opportunities for top view photos of the inner part of the DDP. The entrance is beneath the full structure. The architecture is unique from every perspective. There are pianos in various locations, free to play. Around the back, there is an upscale street clothing market. On the basement level of the plaza, you can find a few more cafes, shops, sculptures, and even street artists who could do a quick portrait for you. 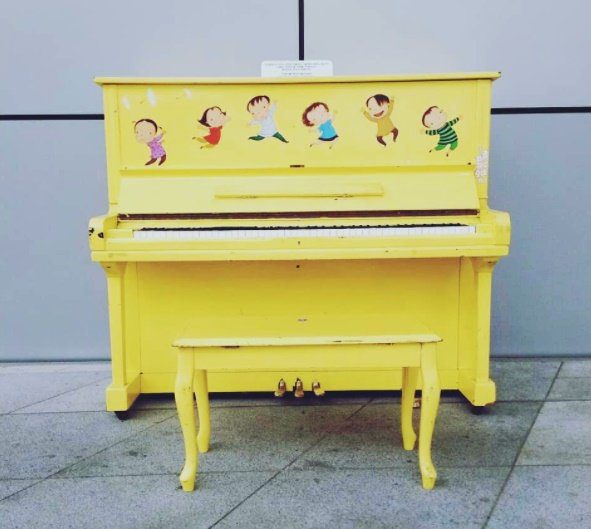 On the ground floor is an exhibition hall. The art museum is on the second floor. The third floor is where the children’s play area is.Here are also space for exhibitions and performances. Viewing are ,cafe and garden are on the roof .There are also leaderboards with maps in many locations that make it easier for you to find your way around.Nearby DDP is underground shopping, night markets, Dongdaemun Gate, a couple of fo hotels, and plenty of shops and restaurants.

And in the evenings

In the evenings there you can enjoy local people’s performances which include a dance with music. There is a food truck (night market)

And a couple of stands outdoors where people are selling handcrafted items such as jewelry.

Also, there are a few high tech projections on the walls of the building on which they display upcoming events or commercials.

Dongdaemun design plaza is not your typical exhibition center. It is a place that you can do multiple activities while enjoying the beautiful architecture. 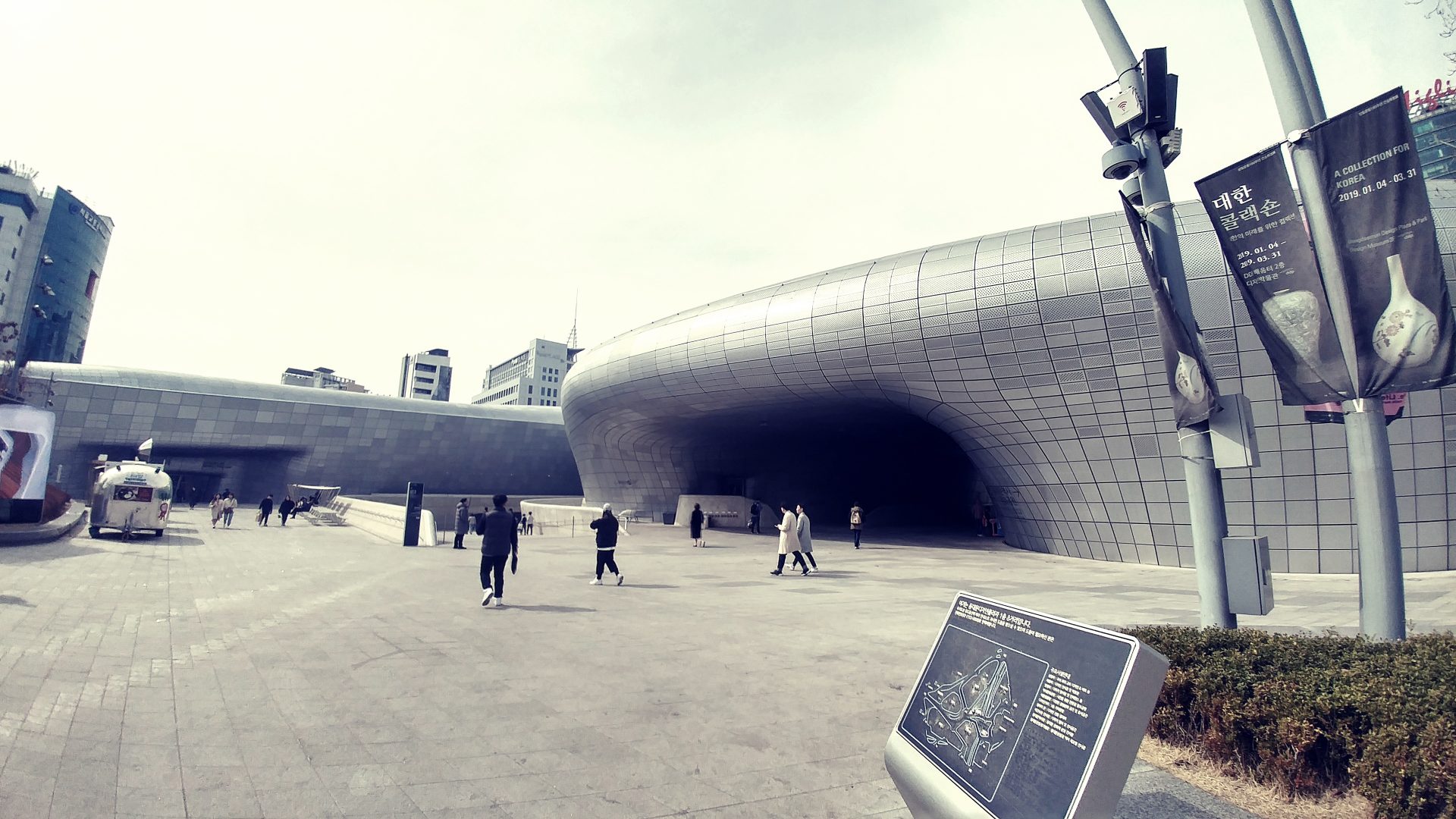 Should I use a bout or a ship?

There is no need to be too extreme when it comes to reaching DDP. There is easy and convenient access to the building. Take Subway Line 2, 4, 5 to get to Dongdaemun History & Culture Park Station and then take exit 1, which has a connection to the DDP. Once you walk out the exit of the subway station, the DDP just on the left. Climb the lighted stairs to reach the street level for the appreciation of DDP. 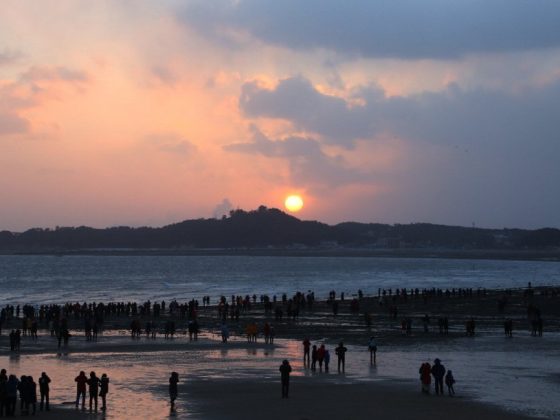 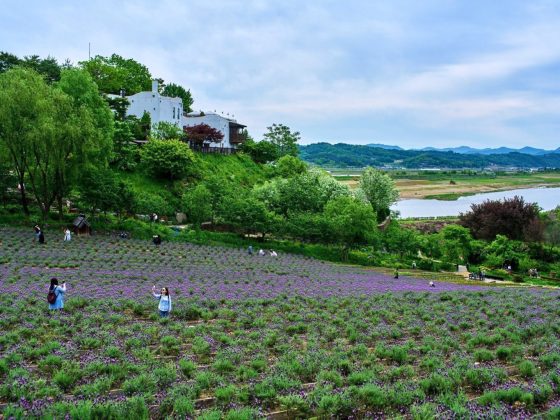