What to Expect at Daegu Nature Park?

Daegu Nature Park has one of the oldest landscapes in the North Gyeongsang Province. While, today, it’s a preserve for wildlife and natural vegetation, it was a place where soldiers took refuge during battle about 500 years ago.

Despite its rich history, it’s not as well-known as Daegu’s other attractions such as the Apsan Mountain. However, if you’re looking to explore all Daegu has to offer, you can’t exclude the Daegu Nature Park.

Now, if you don’t know what to expect at Daegu Nature Park, you’re in luck. This guide lists all the main attractions the park offers, including the famous Halloween ‘Horror Village’ event.

All Sorts of Animals and Reptiles

If you love nature and animals, Daegu Nature Park has an obvious appeal for you. The park has a wide range of animals, everything from unique breeds of goats to snakes. All animals come with educational sign posts. In this way, you get to learn about different species.

Apart from snakes, there aren’t any dangerous animals such as lions and tigers. This is because the park aims to preserve animal life, rather than commodify it. The zoo isn’t a full-fledged one; rather, it’s a haven for several species of animals.

Consequently, it’s both a fun and educational venture, especially if you’re visiting with kids. As mentioned, the animals are kept inside the zoo, which is located inside a bigger park.

Many restaurants surround the area, so you can eat and interact with the wildlife at the same time.

Secondly, you can visit the Daegu Nature Park aquarium. Who doesn’t appreciate marine life, especially when it’s so pretty?

The park’s wildlife preservation doesn’t stop at mammals and reptiles. It extends to aquatic animals. As you can see above, the Daegu Nature Park Aquarium has loads of colorful and vibrant fish species.

When you enter the aquarium, you get to see the magic of underwater life. The aquarium holds more than 30 species of fish.

It’s a great place to stop and take pictures. There are even several photo booths surrounding the aquarium. Consequently, this is one of the most Instagrammable places in the entire park.

The aquarium links the zoo to the rest of the park. Therefore, it’s surrounded by the park’s lights and flower gardens. 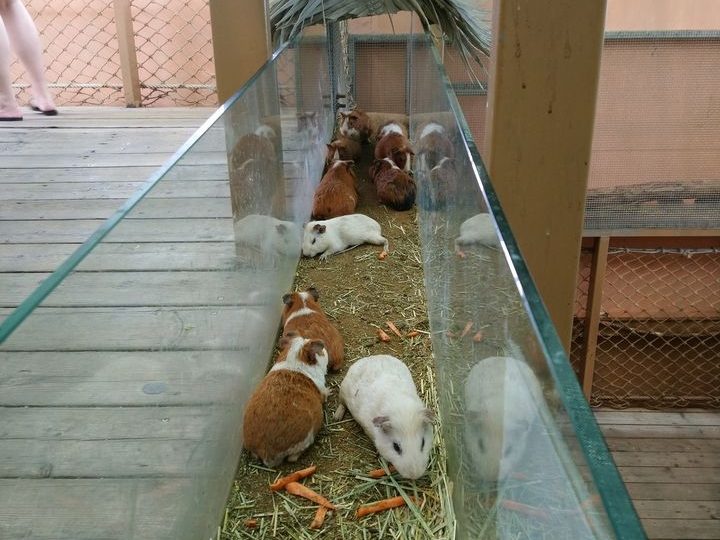 Zoos are the best places to take children, especially if you’re on vacation. As mentioned, zoos are educational in a fun way. Children can learn more about different animals while observing them. Since it’s hands-on learning, children retain information more easily.

Petting zoos are even better because they allow children to interact with animals, not just observe them. Luckily, Daegu Nature Park has a pretty extensive petting zoo.

If you want to keep your kids occupied, this is a fun way to do so. The park’s petting zoo has bunnies, lambs, hamsters, goats, kittens, and even puppies. Children can feed baby animals if they want to.

Don’t worry, though. It’s completely safe. Wilder animals such as deer aren’t kept in the petting zone. However, you can still feed them.

The petting zoos are located near the play areas. Therefore, you can easily keep your kids in one place.

Apart from cute animals (as pictured above), Daegu Nature Park also offers annual events such as Halloween and Christmas extravaganzas. However, the Halloween-themed event is much more popular.

If you’re visiting Daegu, consider going in October, so you don’t miss the event. The entire park is furnished in Halloween-themed decors such as pumpkins, skulls, and scarecrows.

The place is essentially transformed into a ‘Horror Village’. There’s a lot to do during this time. You can walk through haunted houses, ride in kayaks, take hayrides, and eat Korean barbecue. Moreover, you can also attend the Park’s famed light show at the end of the night.

It’s a very family-centered event. Therefore, it’s preferable to come with people you know. If you’ve got kids, this is a fun and interactive way to spend time with them.

To sum it up, the Daegu Nature Park is an interesting place to visit. If you like animals and nature, the park comes highly recommended. However, be mindful; as you probably inferred, the park is more of a family spot.

While you can come alone, it probably won’t be as fun as it would be if you were with someone. That said, it’s still a tranquil and relaxing place where you can relax and interact with nature.