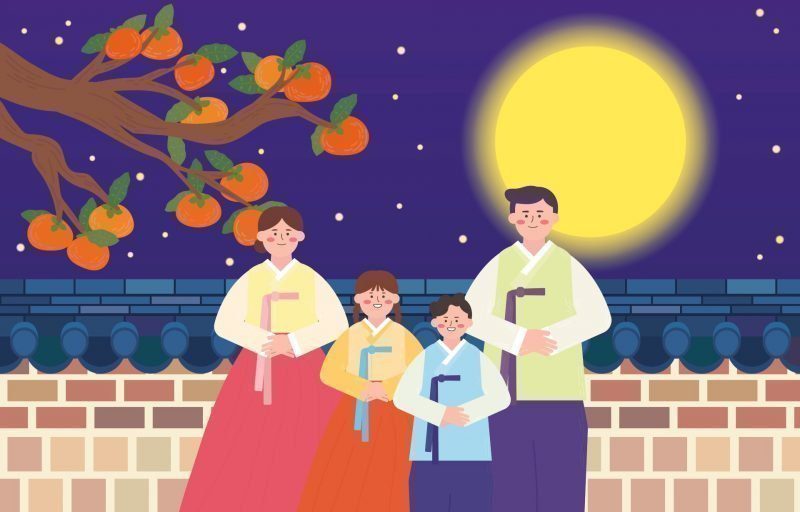 Chuseok is one of Korea’s major annual festivals. It is a celebration where members of the same family come together to share a meal and pay homage to their ancestors. In the United States, Thanksgiving could be referred to as one of the festivals most similar to Chuseok.

This holiday gives Koreans a few days off to visit their families scattered across the country. Usually, during this period, it is best to avoid driving by the risk of being trapped in traffic jams for hours. Plane and train tickets are sold very fast too! 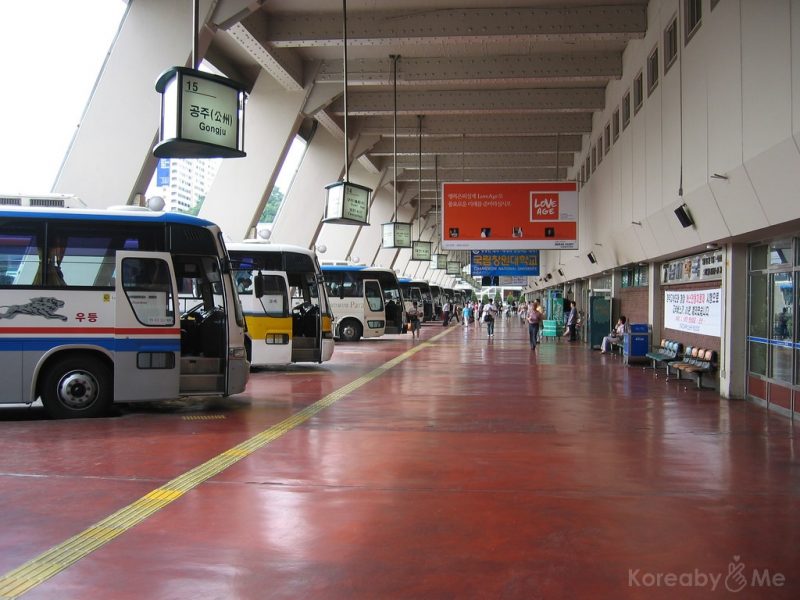 It is also customary to buy gifts on these feast days. Often stores offer a variety of ready-made gift sets to make the job easier.

On the day of Chuseok, we gather at the graves of the ancestors, we pray and we make offerings. Then there is a traditional meal consisting of typical dishes. A wide variety of fruits, ‘jeon’ pancakes as well as traditional alcohol …

Among its typical dishes, seongpyeon is unmissable. Seongpyeon cakes are a variation of ‘tteok’ rice cakes filled with sesame, red beans, dough, chestnut cream… These cakes are made with the family the day before Chuseok!

Originally, this festival was accompanied by various traditional games. If the mask dance is a famous spectacle, the “ganggangsullae” dance and the traditional Korean “ssireum” wrestling were also very popular. Today, we can still see some performances open to the public during the celebrations. But wearing the hanbok is still very popular.

Chuseok is an important event in Korea that allows families to come together and share warm moments. If you come to Korea during this time, despite many shops closed, you can enjoy free cultural activities, including palaces and even at night, as well as other festivities planned especially for the holidays.

Recommended Places to visit for the Chuseok holidays:

Outside this period, palaces and other museums are chargeable. If you ever can’t be in Korea during Chuseok or Seollal You can still rent a traditional hanbok from the shops near the palaces. Although the entrance is cheap. If you wearing a costume, you can access to the palace for free.

Gyeongbokgung if you want to see the most historically important & physically impressive of the Seoul palaces.

But I highly recommend visiting the Changdeokgung one. this palace was designed to be in harmony with its surroundings rather than imposed upon them (the Secret Garden in particular). Visiting all five would probably be overkill for most visitors, especially if you’re only in Korea for a short time. On the other hand, you should probably visit at least one or two while you’re in Seoul!

Most of the palaces have been destroyed over the centuries by fire and invasions. It was rebuilt and has survived since then.

Some of the palaces are famous for cherry blossom viewing in April, namely Gyeongbokgung, Deoksugung, and Changgyeonggung. Changing of the guard ceremonies are held at the gates of Gyeongbokgung and Deoksugung at various times through the day.

You know everything about this traditional festival. But this year is a bit special following the COVID pandemic.

Did you know? To prevent people from gathering, the government has put in place several rules.

In particular, the ban on large coffee chains from accepting customers eating inside. For the most part, only the take out is accepted. Most museums, palaces, libraries, and other public places are closed to visitors.

And as Chuseok approaches, the government calls on its citizens to be careful and avoid travels. This is the first time that bus and train tickets have not been sold out during the holiday season. In addition, for those who travel by car, the tolls usually free during Chuseok will be charged.

Many families will not be reuniting this year. But maybe for the best? Traditional festivals in Korea usually require women to do most of the work. Every year, it’s the same story, we visit our in-laws and the wife has to help in the kitchen and respond to any request from her in-laws. In short, it is not really a vacation to rest.

The word of the end…

This year looks completely different in the face of the changes that are taking place.

But that will not prevent us from taking advantage of these well-deserved days of rest. Take care of yourself and your loved ones. And I wish you all a Happy Harvest Festival.

Relaxation with Meditation at Godowon...
Without You! Korean Tinder Museum Dat...
Meerkat Park in Hyehwa
Suwon Hwaseong: Exploring the City of...
Filipino Food in Busan: Mabuhay
Food collaborations in South Korea: F...
Suneung: The Exam that Determines the...
Hannam Area: A Guide To The Best Seou...
Total
853
Shares
Share 853
Tweet 0

I am a french native passionate about Korea. During my studies, I had the chance to work for a bimonthly magazine devoted to Korean culture. I have made several trips and have been a travel guide on Seoul for our readers. Now I live in Seoul and I would like you to discover my city.