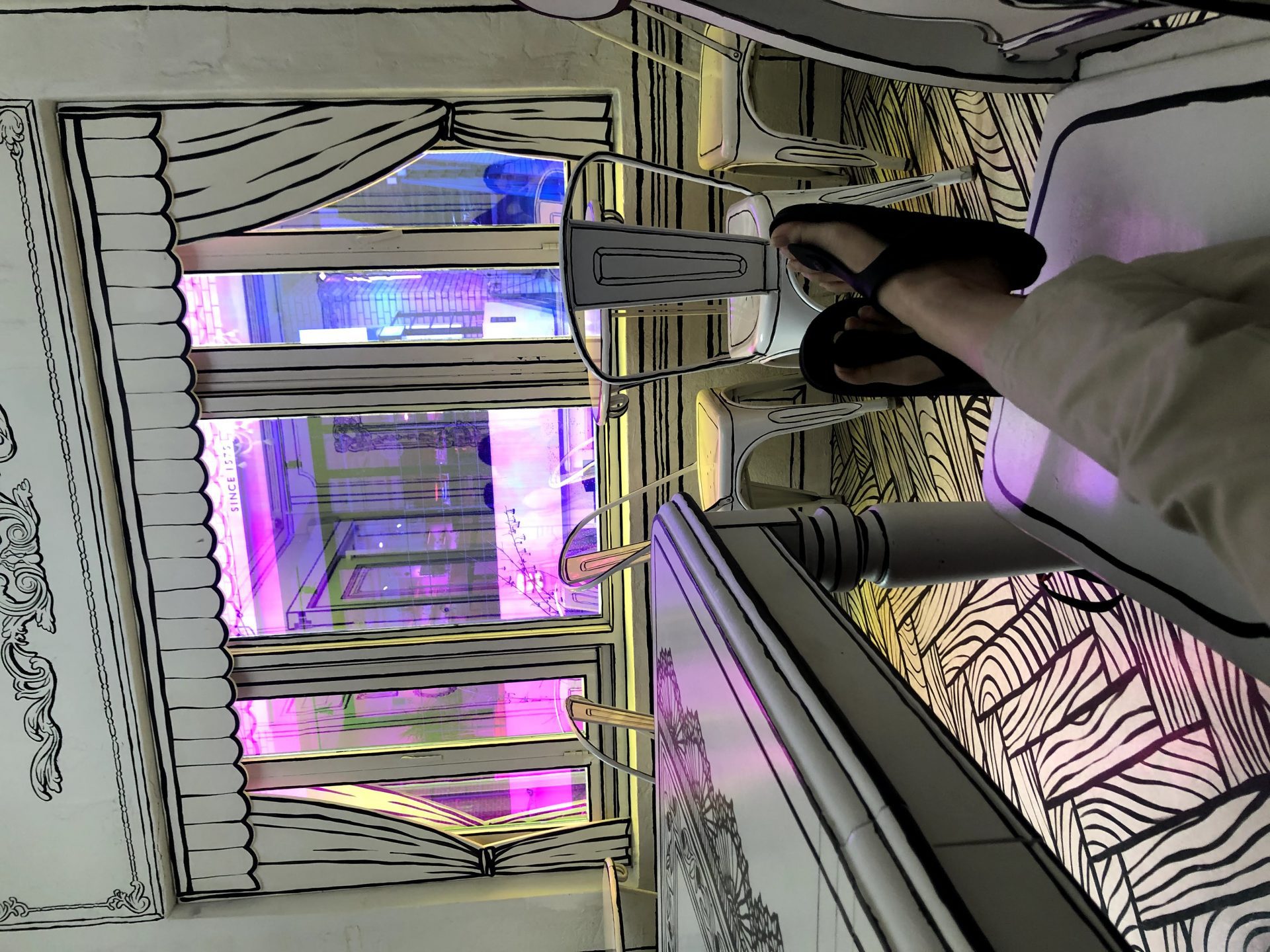 Previously known as Cafe YND 239-20, this viral cartoon-world-like cafe went viral since its opening in 2017 and has been welcoming more visitors from all around Korea thanks to its unique concept. Why does the name of the cafe change when it moves? It’s because the cafe name exactly takes after its address so you won’t get lost searching for Cafe YND 223-14.

The easiest way to get to Cafe YND 223-14 is to get off at Hongik Univ. Station and walk there. However, it may require quite a long walk for about 1.2km according to Kakao Map. If you hate walking, you could also choose to take bus 272 and get off at YeonHee 104 bus station. Then the cafe will be in 5-minute walk!

Inspired by the popular Korean Drama “W – Two Worlds” by Lee Jong-suk and Han Hyo-joo, in which the characters accidentally enter the webtoon world, Cafe YND 223-14 is designed uniquely just like a real webtoon world. 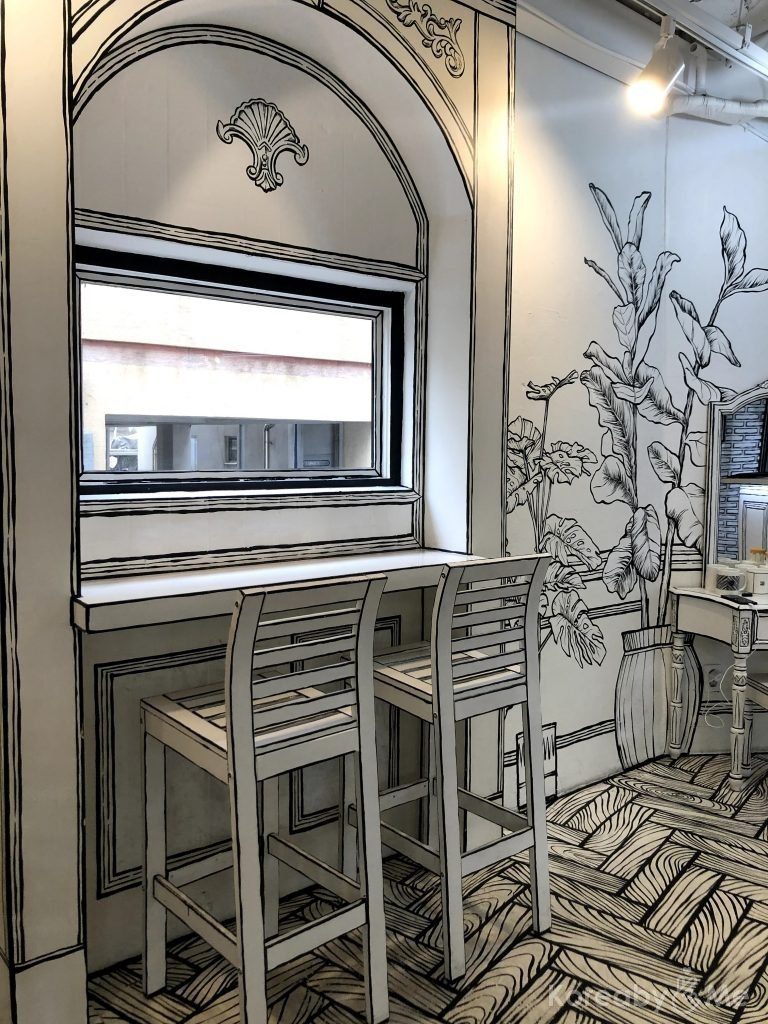 The walls are plastered with black and white decorations, which somehow seem real but somehow untouchable as well. The furniture, tables and chairs, windows, and even curtains are all in two-tone – the flat surfaces white and the edges black, making it look somehow in two dimensions. You may get easily confused about whether or not the chairs are really exist or just a painting. (At least I did.)

Everywhere inside the cafe looks Insta-worthy. Here are some photos we took inside the 2D-like cafe. 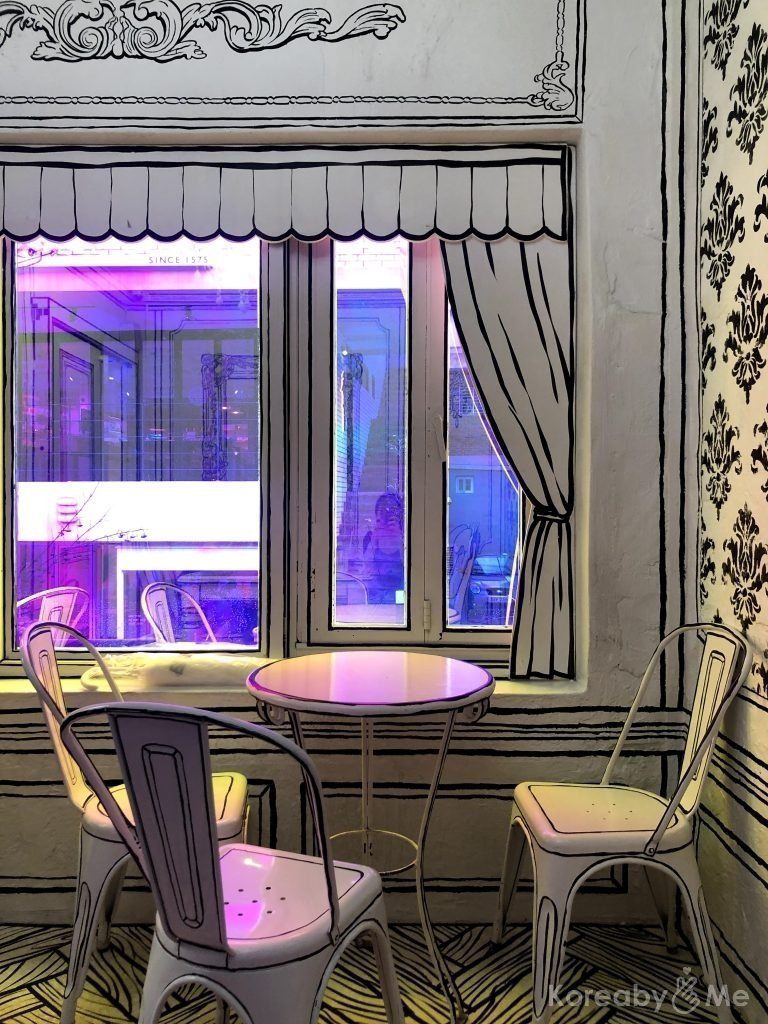 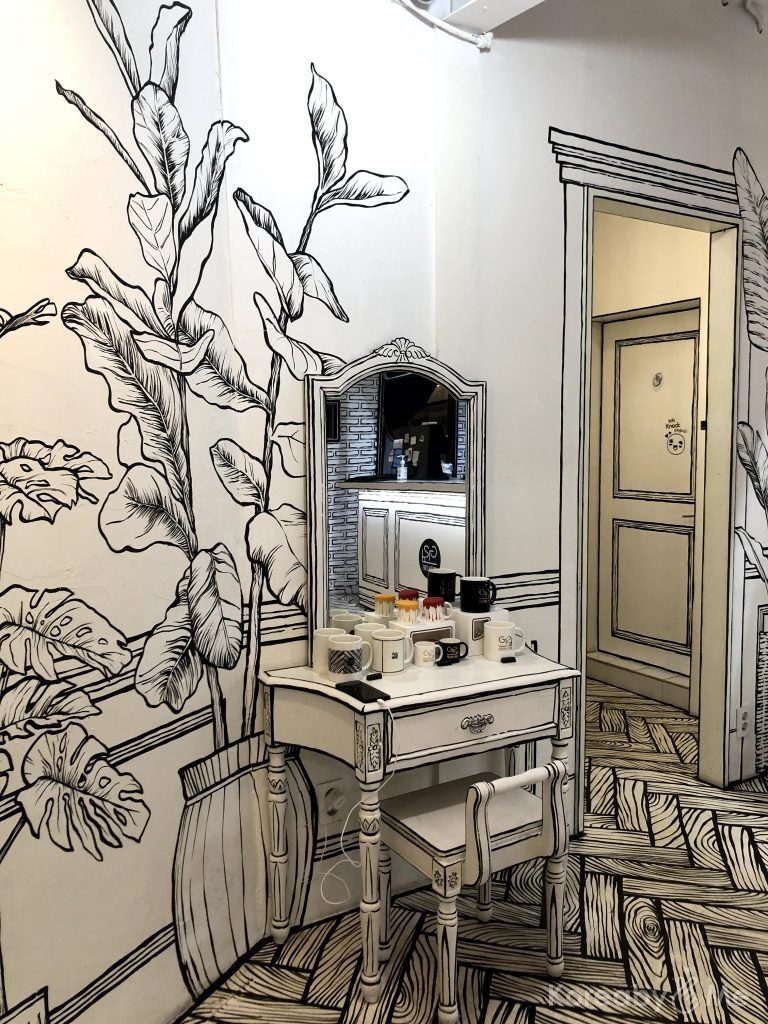 As what we know, they also have a rooftop terrace but unfortunately it was closed the time when we visited there due to the corona virus situation. (sob) Up there, there were laundry lines with many fake paper 2D clothes hanging on it and some chairs facing to the “real world” as well. Do you see the contrast?

Before they moved place, their cafe space was actually very limited, an outdoor patio and an indoor space which only enough to accommodate 2 tables of customers. But after some time, the cafe became popular so in order to meet the demand, they moved their place with expanded space. 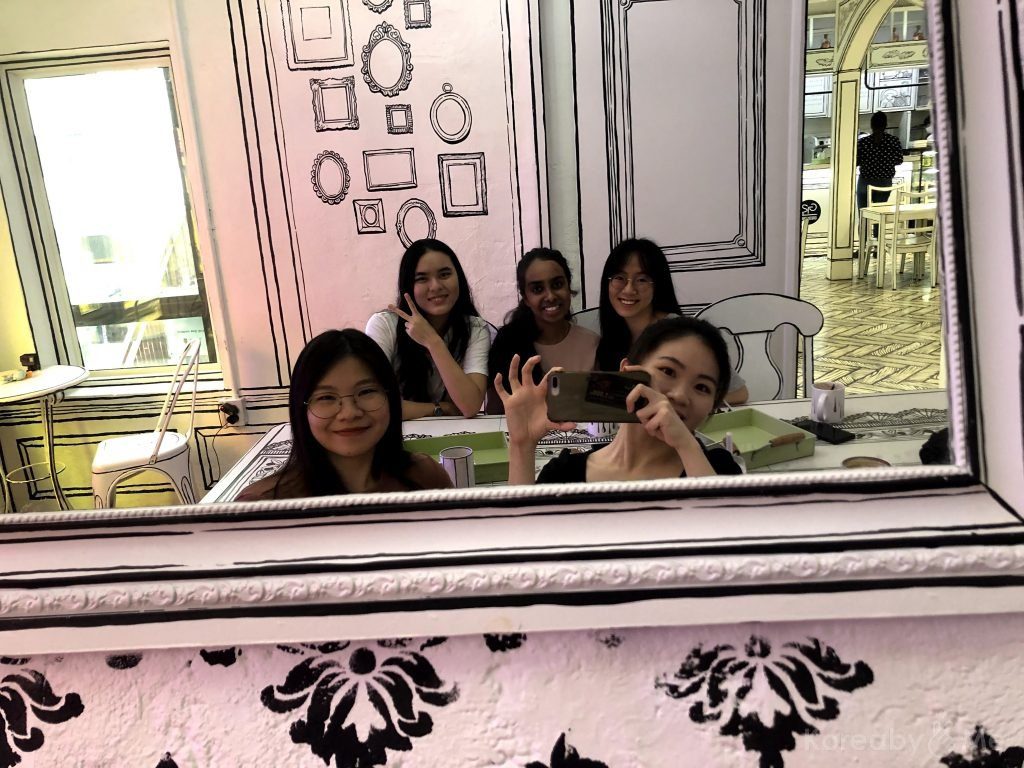 At the current location, there was an open space close to the ordering counter as well as a separated room for a long table enough to accommodate 8 people and another two small round tables.

The prices of their coffee and drinks range from 4500 won to 6000 won, which is considerably inexpensive for cafes in Yeonnam-dong area. Even the cups of the drinks look like a part of the webtoon world. 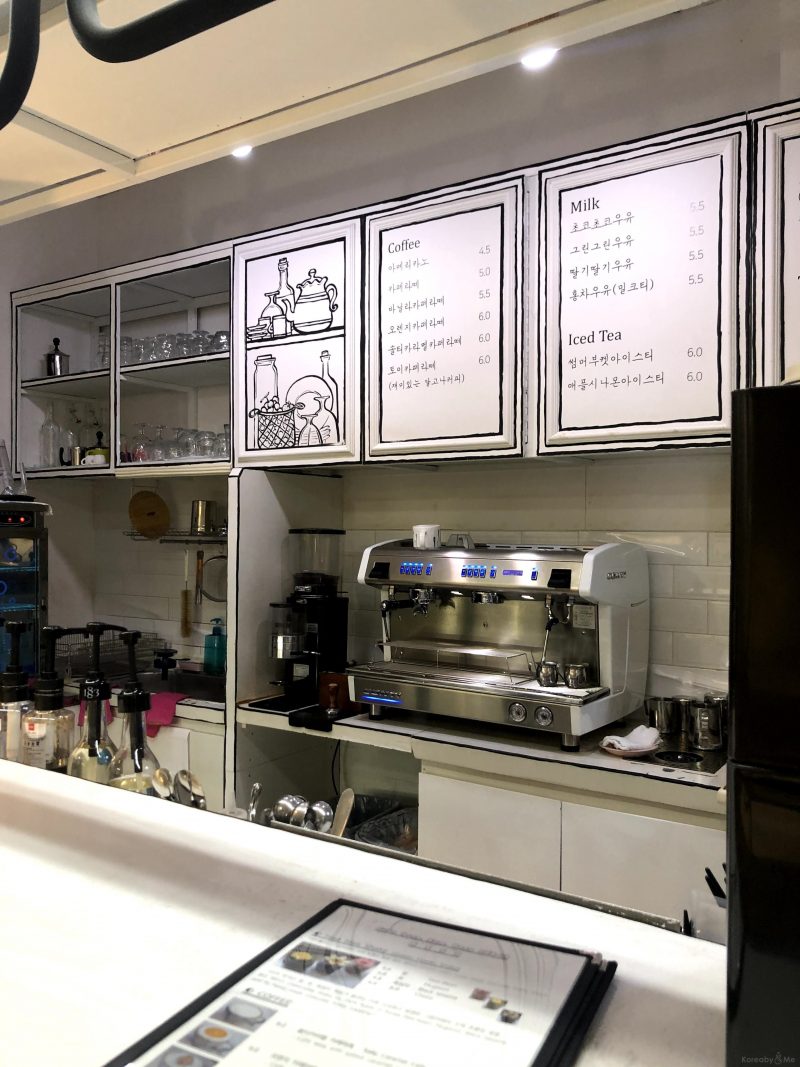 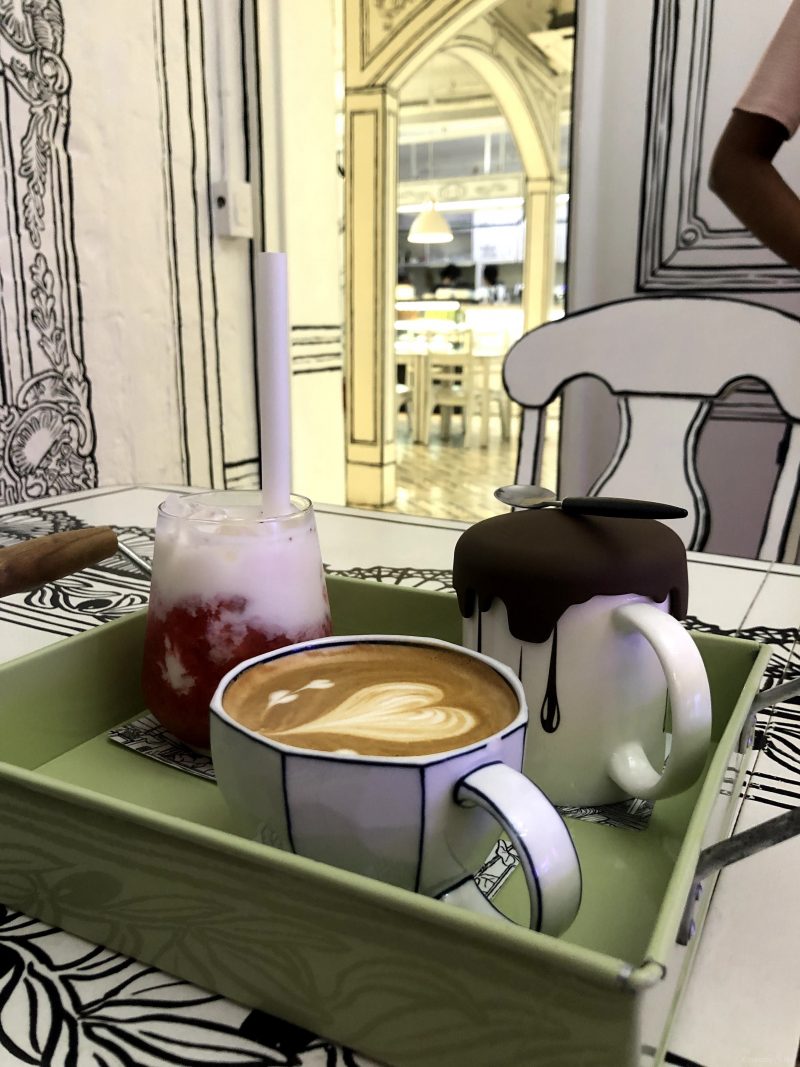 We ordered a strawberry milk(latte), a cafe latte and a chocolate milk(latte). Their Strawberry Milk was good. You can still feel and taste the strawberry extracts inside the milk. It feels fresh! Chocolate Milk(latte) cup was unique. There was a wax-like lid on the top of the cup, making them look extra adorable!

Yeonnam-dong is indeed a cafe treasure. There were so many beautiful cafes that are worth a visit along the streets. And Cafe YND 223-14 is just one of it! Recently, they also opened another branch in Jeju with the name Jeju Greem Cafe.

Hope you enjoy reading this! Visit their Instagram page for more info and photos! www.instagram.com/greem_cafe 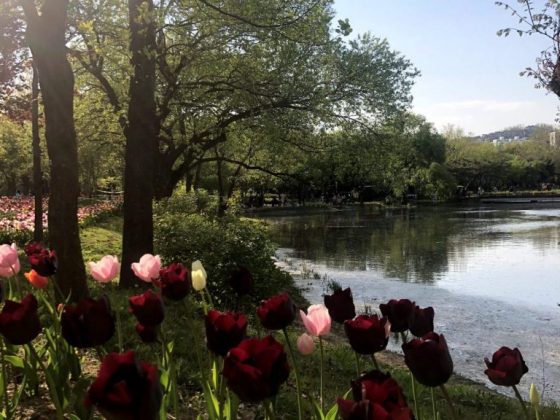 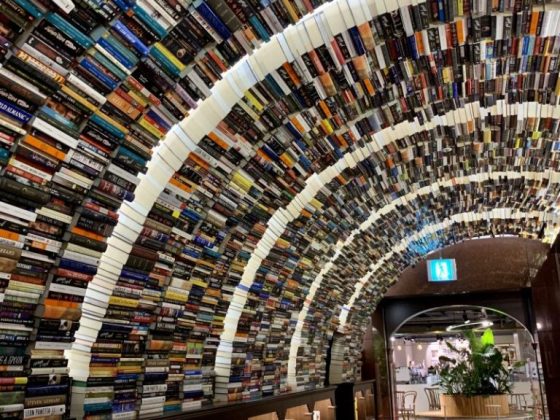