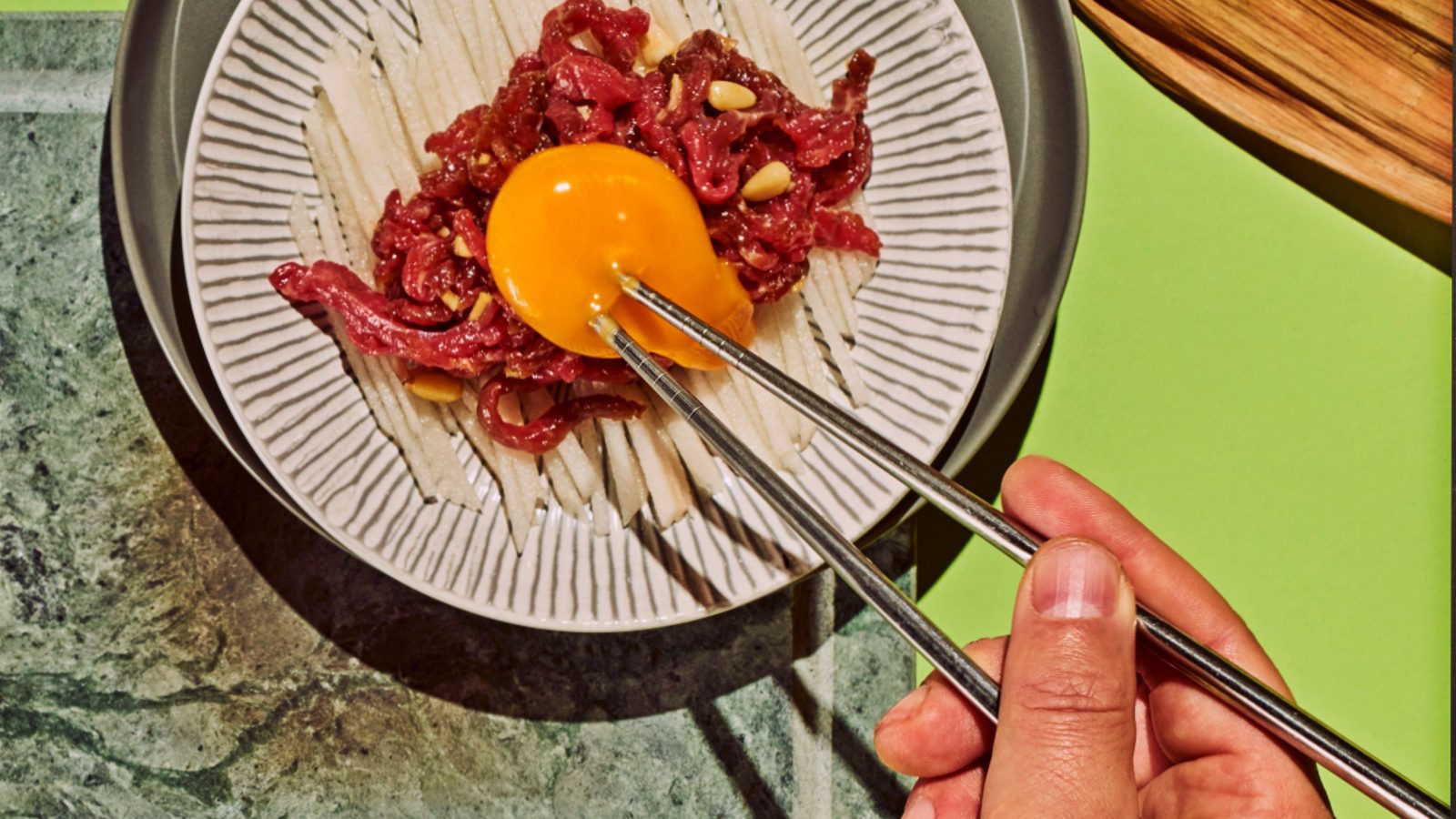 There tend to be mixed reactions when yuk-hoe (육회) comes up in a conversation. There are some who love it and some who are terrified at the notion of eating raw beef. For me, I side with the former. I love yuk-hoe, I think it is one of the best Korean dishes out there. Today, I would like to introduce you to the best yukhoe house in South Korea, Buchon Yuk-hoe. Located in the famous Gwangjang Market! But, firstly…

Table of Contents
What is Yukhoe?
Buchon Yukhoe
Our Order
Final Thoughts? 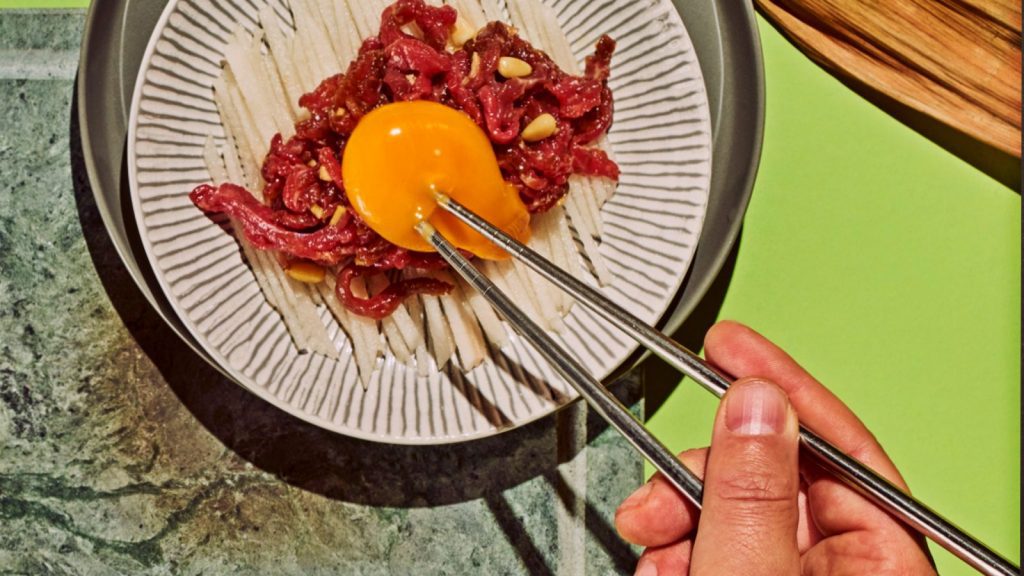 It is a dish of marinated raw beef slices. Yukhoe literally means raw meat. Yukhoe is made of lean cuts, however, slightly tender parts of beef can also be used. It is made by slicing the beef into thin strips and removing the fat. Then, the beef cuts are marinated with sugar, sesame oil, garlic, salt, and pepper. Most of the time, raw egg yolk and thin slices of Korean pear are served alongside it as garnish. It is similar to the Western dish, beef tartare.

Some people might feel a little evasive about eating raw meat, and that is fine. Yukhoe is safe to eat only if it is freshly made. In 2004, the Korean government implemented the Beef Traceability System. A system that requires the ID of the age of the beef, butchering date, distributor, and other factors to track. This maintains the safety of the consumption of beef. 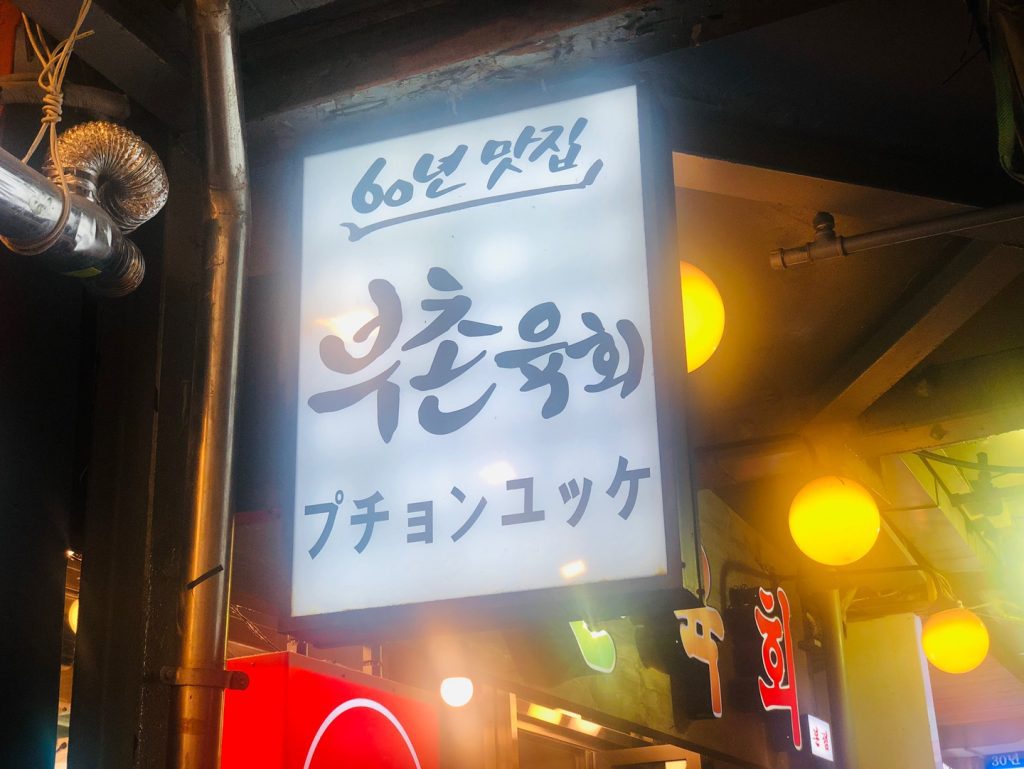 Tucked away in an alley in Gwangjang Market lies the hidden gem called Buchon Yukhoe. With over 60 years of serving their customers with the best and freshest beef, it’s not hard to see why they’re so popular. My husband and I both love yukhoe, so one sunny summer afternoon, we decided to visit this little treasure.

When we reached our destination, the first thing that greeted us was a long line of customers waiting their turn. We were surprised by the line, but that did not deter us from our mission to eat some good Michelin-starred yukhoe! After some time, we were finally ushered to our seats in the restaurant. It was bustling and buzzing with noise. Waitresses were rushing from table to table without rest. The chatter of the customers was overwhelming, but you could definitely tell that this place was popular.

My husband and I both ordered the Yukhoe Bibimbap, a staple in the restaurant. While waiting for our order, we were served a bowl of soup, which I guessed was Beef Radish Soup. I also took a look around the restaurant and noticed that they had a shelf proudly lined with Michelin certificates. As I was taking a gander at the certificates, our food finally arrived in record time. 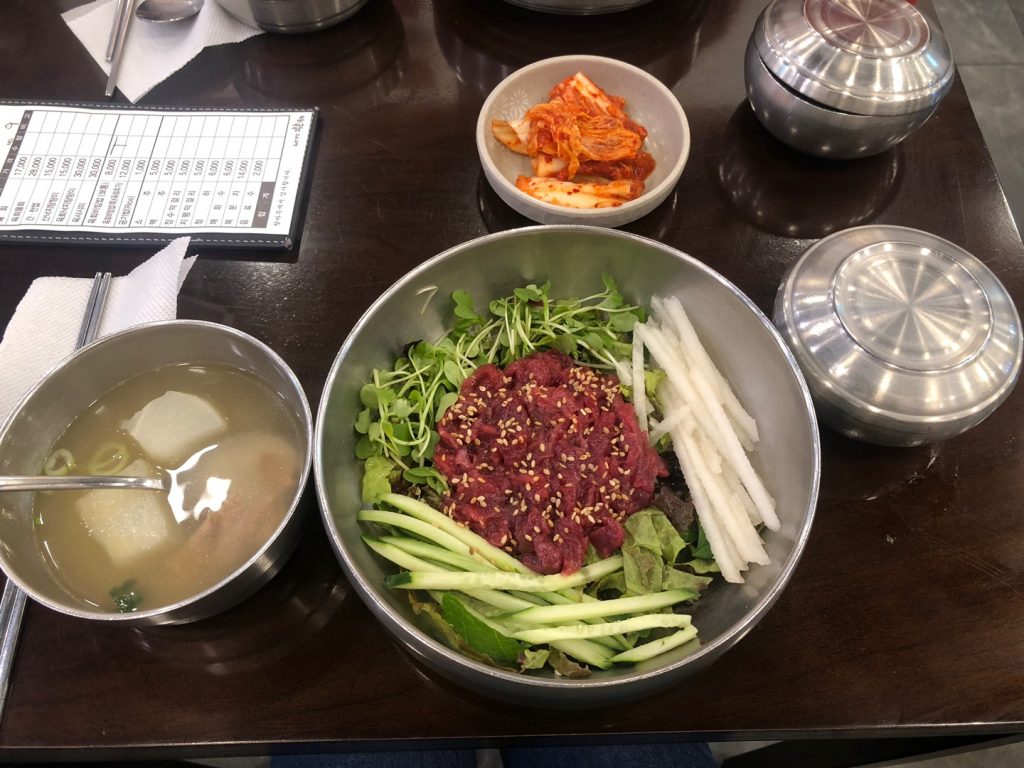 The dish itself was visually pleasing. The meat was encircled by vegetables such as cucumbers and perilla leaves, as well as a side of sliced Korean pears. The rice was served separately, so we had to add it ourselves. They also handed us a bottle of cho-gochujang to season to taste.

After mixing the ingredients together, I excitedly scooped a spoonful with plenty of beef and took a bite. The textures and flavors of the ingredients exploded like a party of fireworks in my mouth. The tender and soft beef literally melted away with every chew. The nutty taste of the perilla leaves with the sweetness of the pears complimented the dish extremely well. It was like as if I had a taste of heaven in my mouth. The rice was soft and fluffy, just absolutely perfect. The sauce was tangy with the right amount of spice. 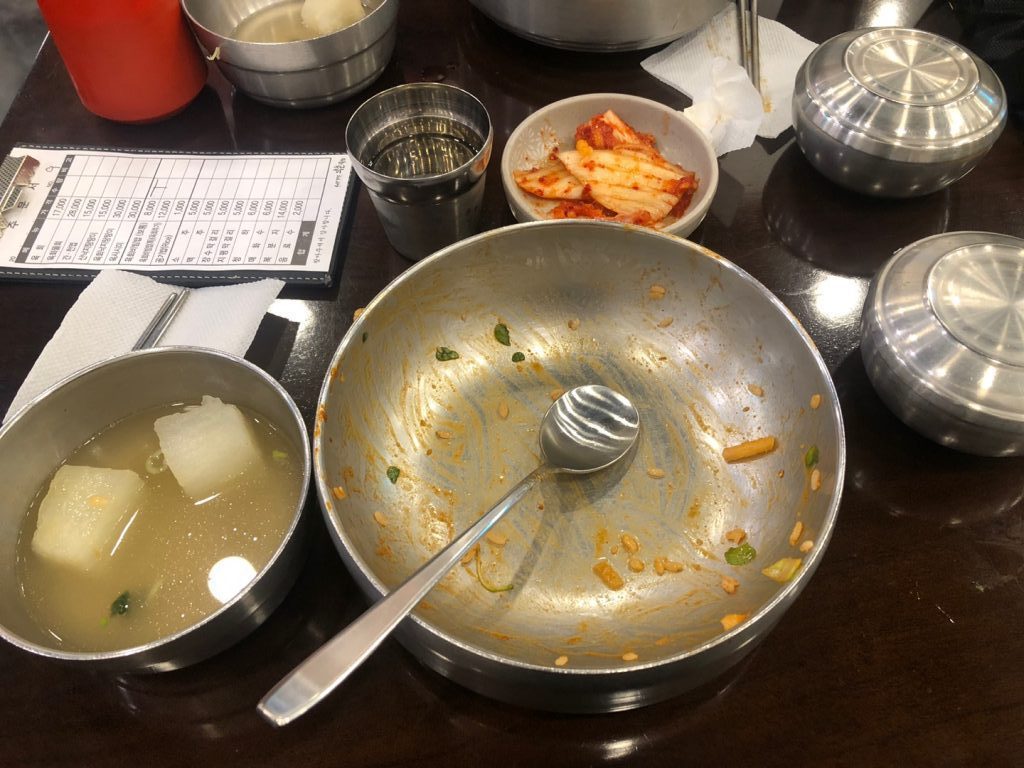 Within a blink of an eye, we had cleared everything in our bowls. It was a satisfying meal and our tummies were filled to the brim with the delicacy. After satiating our taste buds, we paid for our meal and left the restaurant with wide grins. In total, we paid less than 20,000 won for our meal. Delicious and affordable!

Definitely recommend this restaurant to everyone and anyone. If you just want to try it out or if you love yukhoe, I suggest giving Buchon Yukhoe a visit! I will, without a doubt, return to this restaurant just to satisfy my yukhoe cravings from now on!

Want to try some more Korean foods that might sound a little unusual to westerners? Click Here to learn about a delicious drinking food – chicken feet!