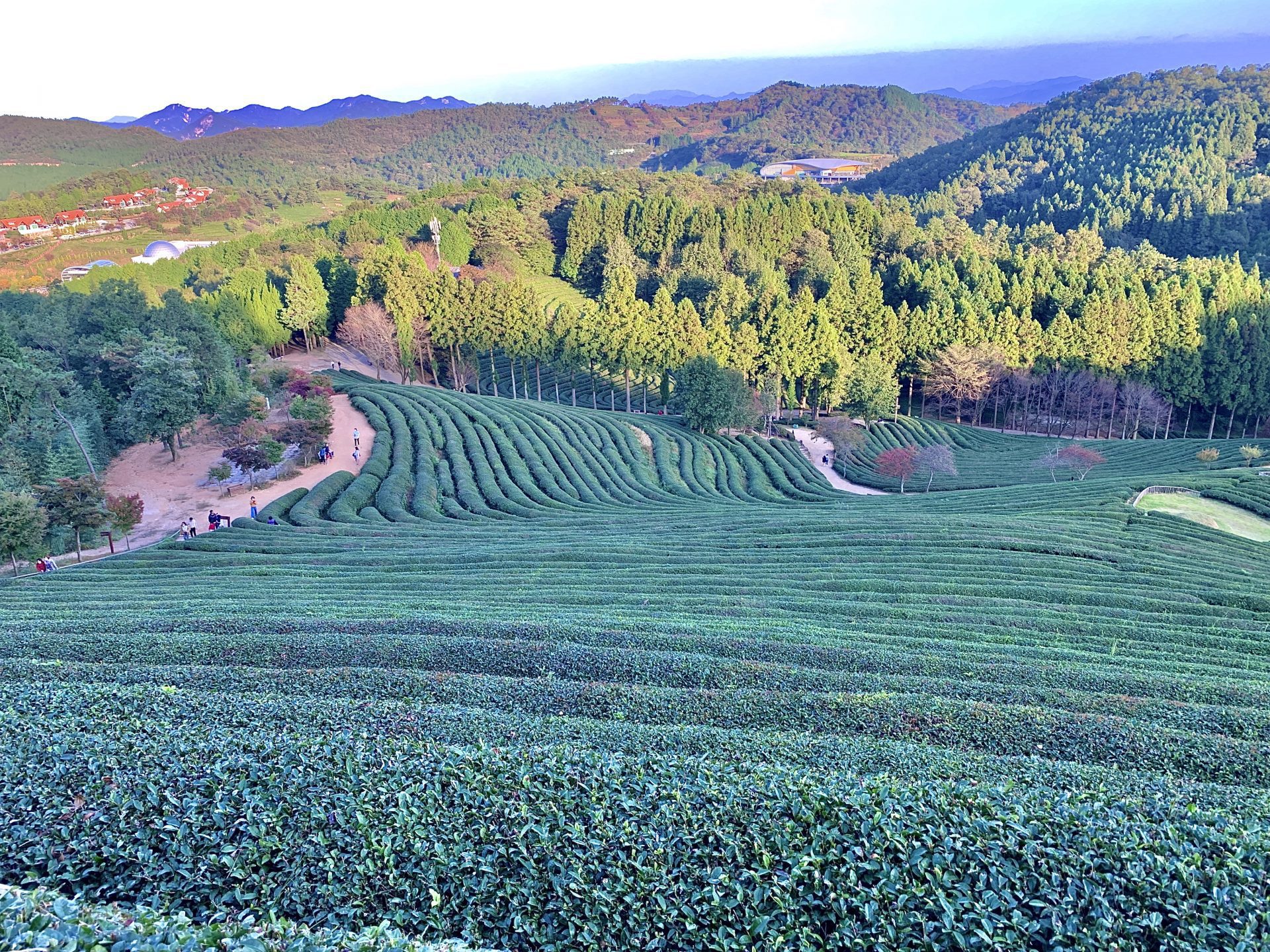 BOSEONG GREEN TEA FIELDS: Everything You Need to Know to Visit

Are you a nature lover and also a tea enthusiast? Then the Boseong Green Tea Fields should be #1 on your list of places to visit in South Korea. Even if you’re not a fan of green tea, Boseong should be pretty high up on that list just for the jaw dropping natural beauty!

Visiting the Boseong Green Tea Field is hands-down one of my favorite memories I’ve ever had in South Korea. It’s such a picturesque and magical place to visit. Here’s everything you need to know about visiting this place.

The Boseong Green Tea Fields are an amazing destination in South Korea. The lush green tea fields are vast enough to roam and perfect for a weekend getaway with friends and family.

Boseong is considered the birthplace of the commercial tea industry in the country. It is called as DongguyeojI-Seungnam (meaning ” tea house ” in the Joseon Dynasty). Boseong Green Tea is a special product produced only in Boseong county, and it is well-known for great quality.

Tea produced in Boseong County is still active in growing tea plants, accounting for 40 percent of the nation’s tea production and Boseong County marks as the largest tea-producing area in Korea.

WHAT EVENTS CONDUCTS IN BOSEONG

Boseong Green Tea Festival held in Boseong county. At the festival, some of the most popular festival events are the hands-on experience programs such as picking tea leaves, making tea, and sampling green tea snacks. Other events such as the Boseong Tea Plantation Light Festival , tea exhibition & sale, and a number of celebratory performances are also scheduled to be held during the festival period.

WHERE IS BOSEONG GREEN TEA FIELD

Boseong Green Tea Field is near the southern coast of South Korea.

WHEN IS THE BEST TIME TO VISIT BOSEONG GREEN TEA FIELDS

Boseong is actually a beautiful place to visit year-round. Still, most people visit either in spring (between late March and late April) to see the first new leaves on tea bushes, or in summer (from May to August) when the tea bushes are in their prime.

But even if you visit in late autumn or winter, you’ll see quite a scenery, as the hillsides are always beautiful – even when they are covered in pure white snow.

HOW TO GET TO BOSEONG

Getting to Boseong is relatively uncomplicated. The best way to get to Boseong is by express bus. Boseong also has a train station but no access to any KTX (bullet train) lines.

GETTING TO BOSEONG BY TRAIN

From Seoul, you can take a regional train called “mugunghwa” (무궁화) but it’s super slow. This option will take approximately 5 hours and 20 minutes. Not a great option.

If you are still keen on taking the train, a faster option would be to take the KTX from Seoul and then transfer at Gwangju-Songjeong station. From there, you transfer to a slower mugunghwa train for Boseong Station. This option would still take between 3.5 and 4 hours.

GETTING TO BOSEONG BY EXPRESS BUS

Taken a direct express bus is a great option. For those leaving from Seoul, the bus departs from the Express Bus Terminal in Gangnam (고속터미날) at 3:10 PM every day and arrives in Boseong at around 8:00 PM. There is also an additional departure time at 8:10 AM only on Saturdays and Sundays that arrives in Boseong at approximately 1:00 PM.

GETTING TO BOSEONG BY CAR

We chose to drive down to Boseong from Daegu and it was a comfortable ride. The Inter-city is pretty well maintained and you can get some pretty decent views of Jeollado Province along the ride. There are several rest stops along the route allowing you to stop whenever necessary.

Daehan Dawon Tea Plantation produces high-quality green tea and is a popular tourist attraction year-round thanks to the vast rows of tea trees that line the hillside like a deep green carpet. Despite being a small peak at just 350 meters above sea level, the observation deck offers views of the sea on clear days.

Now is the time to stop, stare and awe the breathtaking views of the green tea fields right below. The best part? You can get better results here. Take the main route to the field and stop at the observation deck for stunning views. Keep walking through the narrow rows of green tea plants or make more sense.

There are many different routes to explore around for different perspectives on this PICTURESQUE attraction. Climb to the top for a glance at the green tea plantations overlooking the sea. It’s all worth doing!

After strolling through the green tea plantation, head back down to the foot of the fields and stop by one of the cafes for a real taste of the experience. You can try a cup of Boseong’s very own green tea or a cup or cone of green tea ice cream as a refreshing treat, especially if visiting in the heat of the summer. Lastly don’t forget to stop by the gift shop to grab some green tea souvenirs for yourself or for dear ones before you head out.

There is really so much to see and do in South Korea. The Boseong Green Tea Field has been one of my favorite memories in the country and is a must-see for anyone visiting or living on the peninsula. Let me know how you liked your experience in the comments below

Korean Street Toast
Haunted Korean University Dorm
How to Save Money in Seoul
Top 3 Unique Cafes in Jeonju
Suwon - Walk on the wall (Hwaseong Fo...
Starbucks Famille Park: One of my fav...
How To Join Fan Sign Events in Korea:...
Spring in Gyeongju: A Day Trip
Total
854
Shares
Share 854
Tweet 0