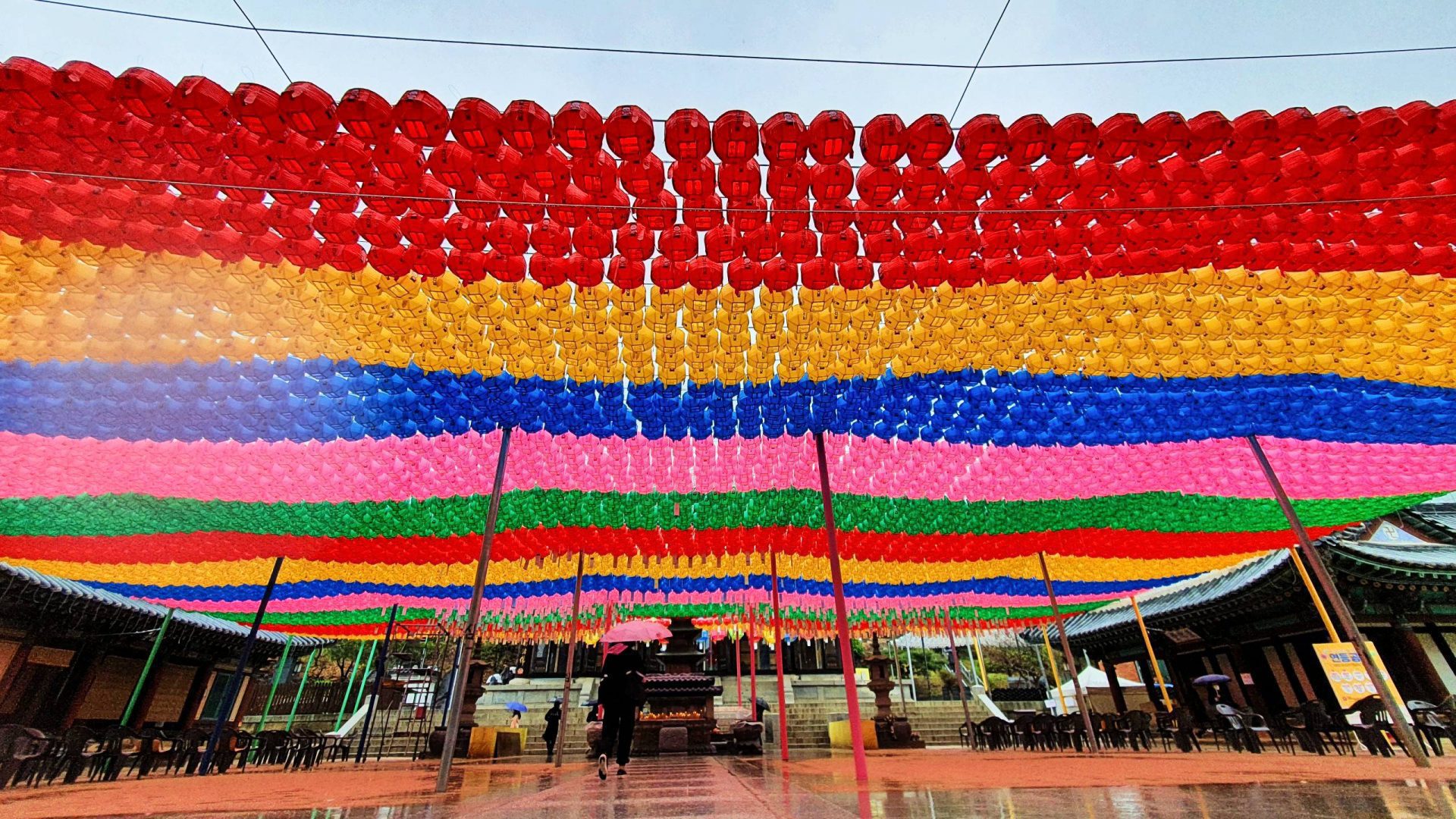 Bongeunsa is a millennial Buddhist temple with a long history of over more than 1,200 years old. National Master Patriarch Yeonhoei in 794 during the reign of King Wonseong of the Shilla Dynasty founded it. Its original name was Gyeonseongsa. Bongeunsa is the cornerstone of the revival of Korean Buddhism as the head temple of the Korean Seon (meditation) lineage. For instance, this is owing greatly to the religious devotion of the Venerable Bowoo.

Many distinguishable masters like the Venerable Seosan and the Venerable Samyeong are the produce of this system. Likewise, they are the carriers of Seon(meditation) legacy of Korean Buddhism.

The Venerable Yeonggi took charge of building Panjeon. It preserves the 81 volumes of the wood blocks of the Avatamsaka Sutra. Kim Jeonghee, one of the greatest scholars and calligraphers of the time, stayed at Bongeunsa Temple in his latter years.

His caligraphy displaying on the hanging board at the Panjeon and is his last work. It is representing his Chusache style at the highest level of calligraphic art. Nowadays, this temple is writing a new history of Korean Buddhism through its practice-oriented temple management.

Moreover, it not only spreads Korean Buddhism and Korean culture at home and around the world with diversified programs including Temple stay, but also continue to maintain its place as a important sizable temple with contribution to the public welfare in the center of Korean society.

The temple is easily accessible through both subway and buses. The 3 subway station connecting the temple are:

The list of buses in route to the temple are:

However, depending on where you are travelling from, the buses may vary too. You’ll not miss the temple station by any means though.

The temple spreads over a wide area and has many different halls, pavilions and houses. Not to forget about the beautiful overhanging stretches of the colorful lanterns which cover the entire temple. Therefore, these lanterns make for amazing pictures for instagram. Although, there are 14 in total attractions to see inside the temple premise. I will try and share with you most of them as follows:

Jinyeomun Gate: It is also known as the One-lined Pillar Gate. On the other hand, Jinyeo means as it is and the ultimate truth without any discrimination. Therefore, entering this gate means searching for the Real Truth.

Beopwangru (The Dharma Hall): The name means Pavilions of ‘Dharma King’, the Buddha. Contrastingly, this pavilion faces the Daewoongjeon which is the Main Buddha hall. This hall holds various religious ceremonies like morning rituals, grand Dharma meetings, prayers and meditations.

Daewoongjeon: This hall was rebuilt in 1982. There are statues of the 3 wooden sitting Buddhas inside it. The Sakyamuni Buddha is in the center with the Medicine Buddha on his left and the Amitabha Buddha on his right. In fact, there is a beautiful painting behind the Buddhas which portrays their theme.

Jijangjeon (Kshtigarbha hall): Kshtigarbha Bodhisattva is enshrined in this building. He guides the dead spirits over to the Pure Land of western paradise where Amitabha Buddha resides. He stays in hell to save all suffering beings until no one remains there.

Yeongsanjeon (Disciple hall): The Sakyamuni Buddha is present here with Mahakashyapa and Ananda with 16 Arahants on both sides. Koreans believe Arahants have supernatural powers and respond quickly to Buddhists’ wishes. Therefore, many Buddhists’ pray for their wishes in this hall.

Bukgeukbojeon: Bukgeukbojeon and Yeongsanjeon were reconstructed in 1942. The BigDipper, the Mountain Spirit and the Hermit-Saint are present in Bukgeukbojeon. The seven stars of the Big Dipper are like God responsible for health, longevity, wealth, fertility and a good harvest. Subsequently, this building shows Korean Buddhism embraced this traditional folk beliefs (traditionally called this building as the Chilseong-gak or Samseong-gak.)

Panjeon (Tripitaka Hall): Panjeon was built in 1855 by the Venerable Yeonggi and a great scholar and calligrapher Kim Jeong-hee. His pen name is Chusa and this hall preserves the wooden printing blocks of the 81 volumes of the Avatamsaka Sutra. In fact, added later were the wooden printing blocks of the Vimalakirti Sutra, the Collection of Poems written by hermit Hansanja, the Initial Self-Discipline by monk Jinul, the printing of Sakyamuni Buddha’s feet among others. Currently 3,438 wooden blocks are wellkept in this hall. However, this is the oldest building in the Bongeunsa Temple where the Vairocana Buddha is present. Additionally, the sign board of Panjeon features the last work of Chusa Kim Jeong-hee as a calligrapher of the Joseon Dynasty.

Jongru (Bell Pavilion): In the Bell Pavilion, there are four sound instruments – a Dharma Drum, a Wooden Fish, a Cloud-Shaped Gong and a Dharma Bell. These four instruments play at dawn and in the evening just before the ceremonies with the intention of saving all being.

The Statue of Yeonji Gwanseum Bosal: This Statue is the Avalokitesvara Bodhisattva of the lotus pond. Statue of Yeonji Gwanseum Bosal, a symbol of the faith of Bosal in Korea, is present in the center of the lotus pond. This Bodhisattva of compassion is holding a bottle of Sweet Dew in his hand, the Amitabha Buddha is present in his crown. This pond is one of the nine ponds lotus flowers are blooming in the Western Pure Paradise of Amitabha Buddha. Subsequently, Avalokitesvara, the Bodhisattva of Compassion, can hear and see the sufferings of all sentient and save them accordingly.

Koreans have been practicing Buddhism for more than 1,700 years. The Bongeunsa Templestay is a program in which you can experience the Buddhist tradition of monastic daily life and purify your mind and body. You put your busy mind down for a moment and take a deep breath to look inside yourself at Bongeunsa Temple and then you can meet and reflect on your true nature.

Templelife is a day program that gives you a chance to experience traditional culture of Korean Buddhism in a short time. Similarly, it is made up of programs that interest for international visitors. Templelife programs include of a tour of the temple, Copying Sutra in Golden ink, Cham-Seon meditation, and Da-Seon (tea – ceremony). You will feel the peaceful atmosphere and relax your body and mind int he Bongeunsa Temple.

Although I was not able to attend any of these programs due to COVID-19, I had a good time exploring the temple. Therefore, I urge you to pay a visit to this place and feel the peace. Luckily, the daily afternoon prayer was on in the Main Buddha Hall when I was there. Therefore, I was happy for attending that. The place is full of serenity and calmness. Everyone is super happy there and smiles with you. Greetings are also really well. There is a souvenir shop at the gate 1 from where you can take home beautiful memoirs. I love bookmarks and bought 2 cute ones from there.

I hope you liked the post. Thank you for sharing my experience. You can read some of my other posts here. Stay Safe and Stay Healthy !! 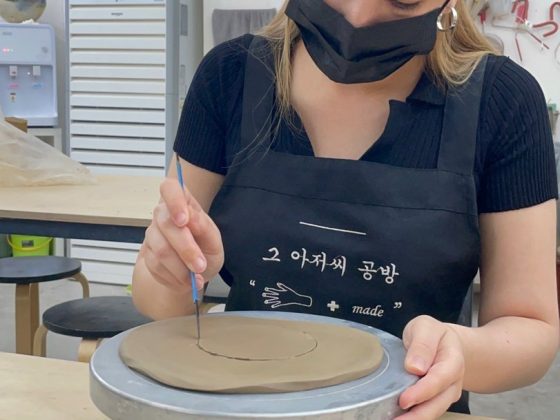 One day Pottery class in Seoul 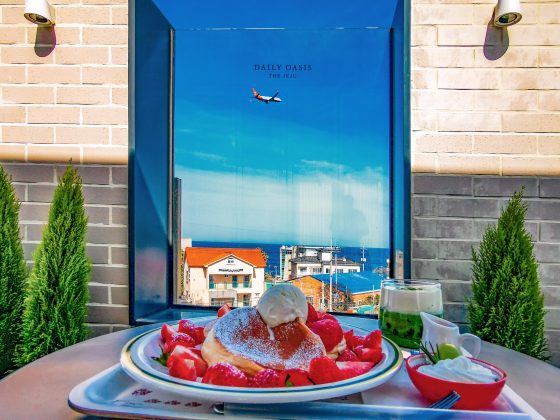 Daily Oasis: Get Breakfast with a Great View!