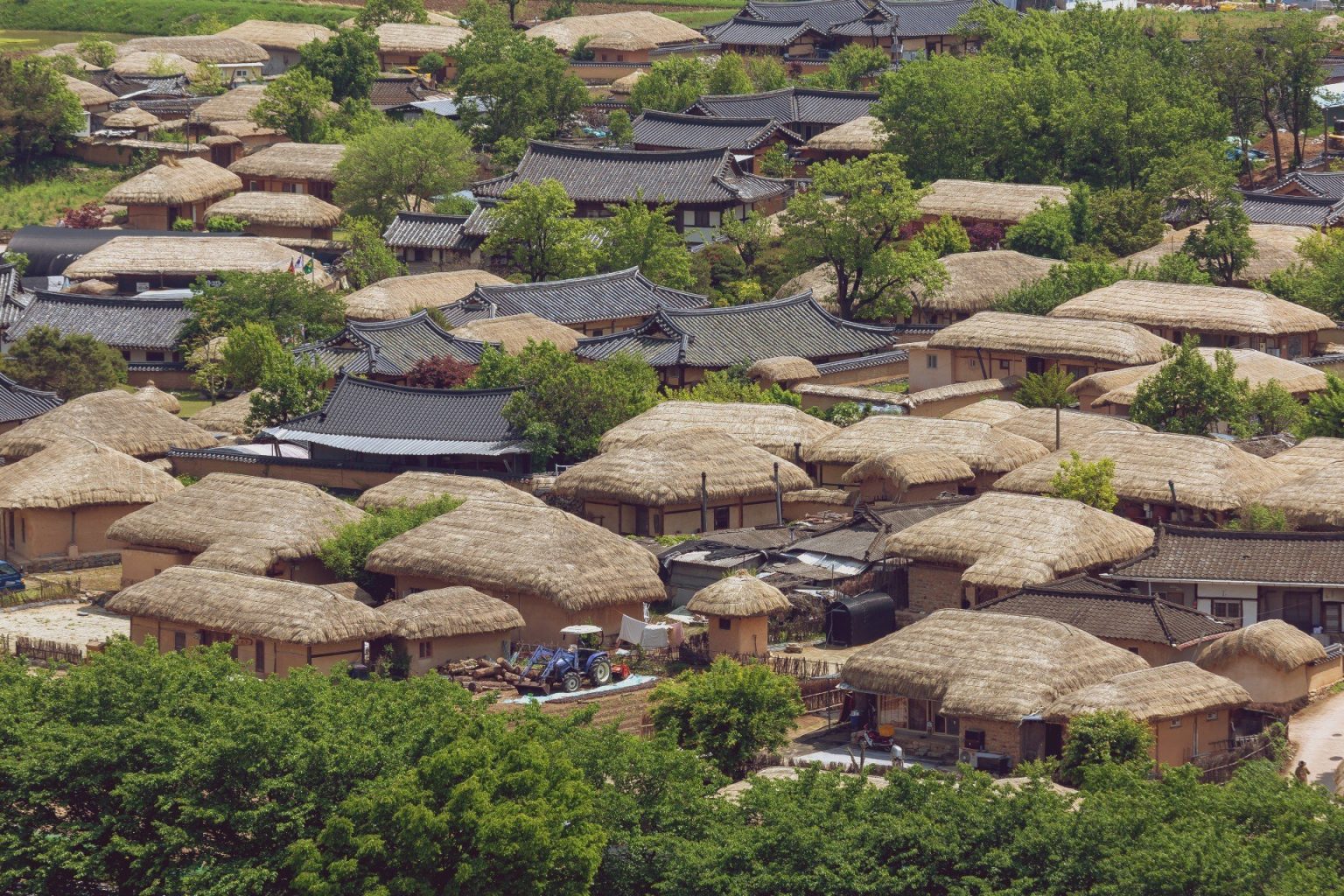 This particular village in Andong city of South Korea is no ordinary village. Anyone visiting the village takes a leap down the path to ancient times of this region. Seriously! When I say “ancient times”, I quite literally mean so because this village is known for its heritage, culture, traditions and unique homes. By unique homes, I mean lots and LOTS of traditional homes.

The village is also known by the name of UNESCO Andong Hahoe Folk Village. With that being said, Andong Hahoe Village is a traditional village with a rich historical background. The background leads back to the Ryu clan, descendants of Pungsan and renowned scholars of the Joseon period like Seoae Ryu Seong-ryong and Gyeomam Ryu Un-ryong.

If that’s not all, the village is magnificently beautiful, encapsulating the wonders of nature in its heart.

Therefore, this blog is solely dedicated to the beauty of Andong Hahoe Village and what more it has to offer.

How To Reach The Andong Hanok Folk Village

Traveling From Seoul Taking The Bus

From there on, after reaching the city, you can hop on the bus no.46 from the Andong bus terminal which will lead you towards the Hahoe Folk Village.

Traveling From Seoul Taking The Train

You can also make your way towards your destination by hopping on the KTX from Seoul. This will take you to Daegu. From there on, you can take the express bus towards Andong Folk Village.

Have you ever witnessed a mask dance before? Maybe not before but after visiting the village, you very well will witness the mask dance.

The Andong International Mask Dance Festival has garnered a lot of attention from international communities over the years. This particular event is held yearly in autumn, featuring mask dance performances from different parts of the world.

If that’s not all, you also get to witness a magical display of fireworks and lantern balloons being lit up over the beach and set free towards the sky.

However, if you are traveling to this part of the world during off-season, even then you can enjoy the taste of the mask dance. These off-season performances are held from January to February every weekend, that is, Saturday and Sunday. You can also enjoy the performances during the month of March till December throughout the week except Monday and Tuesday.

The traditional Korean mask show usually features characters like the wise man, an innocent girl, a drunk man, a grandmother, an evil stepmother and more.

The Mask museum not only serves as a site for UNESCO World Heritage, but it also is a home to famous folktales and national treasures. The Hahoe Mask Museum houses over 3200 international and domestic masks.

Not only that, the beauty of the cliff has been a star of many Korean dramas. If you’re a fan of K-dramas, then you may have surely seen this beautiful cliff.

Some of the most famous dramas which were shot here, at the cliff are Arang and the Magistrate in 2012, Black Knight in 2017-8, Investigation Couple 2 in 2019, The Tale of Nokdu in 2019 and the globally recognized drama called Kingdom in 2019.

And by the way, if you happen to go to Busan, don’t forget to check out this 3-Day Busan Itinerary.

What To Do At The Hahoe Folk Village

Stay In At A Traditional Guest House

Yep! You most definitely can stay in one of the traditional guest houses in Hahoe Folk Village. One of the most well-known personalities, Queen Elizabeth II, celebrated her 73rd birthdays at the village in 1999.

You know, some people consider it a crime if you visit the Hahoe village and not have a taste of jjimdak. This particular dish is based on a braised chicken with noodles in soy sauce broth along with vegetable soup.

If jjimdak isn’t what you’d prefer to have, then you can look forward to other delicacies of the town. Heotjesabap is considered one of the traditional dishes of the village. It is basically a bibimbap which was used to serve only to the nobles of the Joseon era.

Other delicacies worthy of mention are Andong Soju, Gangodeungeo and Andong Guksu.

So let us know if Andong is on your bucket list? We highly recommend trying Jjimdak there.

Jagalchi Market - Korea's Largest Sea...
Online Temple Cookery Class from a Ko...
Personal experience on taking Covid-1...
21 Extraordinary Facts About Korea
Dangjin Waemok Village: An epitome of...
How to Get Tickets to BTS Yet to Come...
While You Were Sleeping Filming Locat...
Our Friendly Korean Villa Ghost
Total
1K
Shares
Share 1K
Tweet 0