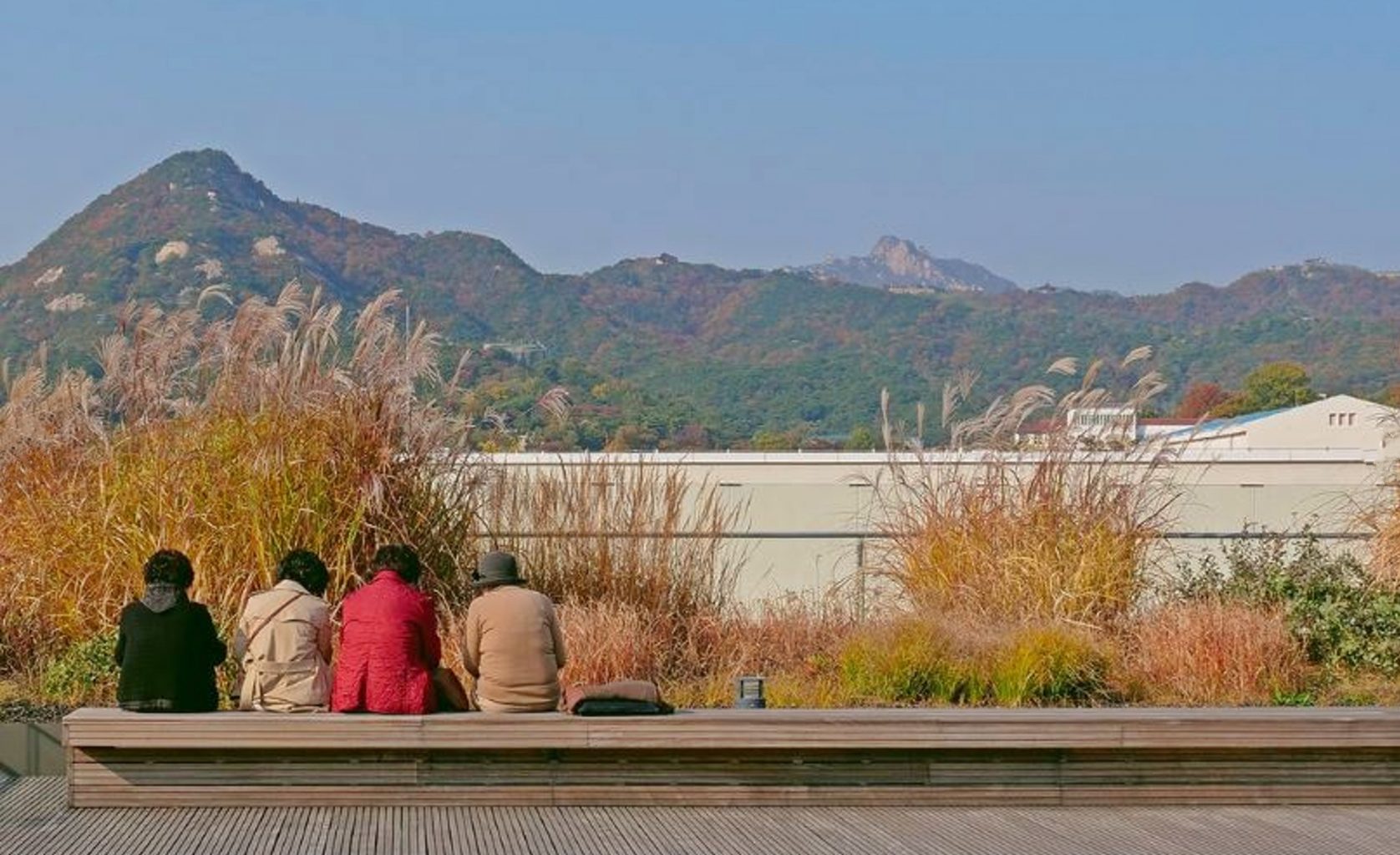 Seoul’s Bukchon neighborhood is famous among tourists for its Hanok village. Chances are, one of the first things you did in Korea was wear Hanbok and stroll around the aesthetic streets. However, Bukchon has a lot more to offer than the standard tourist itinerary. So, here is how you can step into the shoes of a local and spend a day in one of Seoul’s most beautiful neighborhoods.

There is an obligatory photo spot, Exhibitions about arts and crafts, and also a brilliant brunch spot!  Here is an itinerary for a day in Seoul that includes parks, museums, and a tasty brunch restaurant where you can relax in the busy city. It should be a very helpful guide for anyone who wants to visit Bukchon!

Did you know that a large green square has been newly opened in the center of Seoul? It has a long history but is only now open to the public. You can enjoy it temporarily, until 2024. So, be sure to go there and check out while you can and see how great it is!

The History of Songhyeon Park

The park is located in Jung-gu, specifically between the Seoul Museum of Craft Art and the Jongno Cultural Center. Songhyeon-dong was named as such because there used to be Solgogae Pass at this location in the past. It used to be along the path royal court officials traveled on as part of their daily commute. As a result, Songhyeon Park has a pretty long history.

After liberation, the site of Songhyeon-dong was handed over to the U.S. according to the agreement between the Korean government and the U.S. government, and the U.S. built an embassy accommodation there. Since then, Samsung paid 140 billion won to the U.S. to build an art museum during the 1997 financial crisis.

After that, Korean Air planned to pay 290 billion won in 2008 to create a cultural complex such as a seven-star hanok hotel. However, as there were many schools nearby, it was subject to deliberation by the office of Education under related laws. Eventually, it became impossible to build a hotel.

Instead, the Seoul Metropolitan Government decided to turn it into a park and purchased it from Korean Air. For this reason, it has been a forbidden land surrounded by high stone walls without any special use for quite some time.

This square is expected to be temporarily open until 2024. It’s an absolutely great place to take a picture and spend quality time. It’s very obligatory to take a photo here. It is super photogenic, and you can see all the beautiful, spectacular views of the city.

You can check it all out on their website by Clicking Here.

And as far as the special exhibition is concerned, there is something interesting exhibition at Exhibition Building 1. The special exhibition is named ‘White Porcelain How have We Humans Breathed Life into Soil?’. According to the homepage’s explanation of the exhibition, it traces the achievements of the ‘2020-2021 White Porcelain Craft Box Project’ and highlights the works of contemporary artists who are ushering in a new future for Korean white porcelain through their experiments with materials and techniques.

According to the homepage, SeMoCA has collected more than 20,000 pieces of craft art and craft-based materials from various eras and fields from the past to the present. Also, the site is at the center of Jongno-gu where Joseon-era master artisans of the royal palace produced and delivered works of art.

After seeing some sites, it’s time to eat something tasty!

I’d like to recommend you go to the dot blanket which is located near SeMoCA. After all, there is nothing better than having a sweet brunch after walking. Every now and then, I like to have my meal at a local restaurant rather than a well-known chain.

Dot Blanket has been serving comfort food to the Bukchon neighborhood for quite some time. As such, it has gained a reputation for its tasty food and cozy atmosphere among locals.  And – it’s hard to pass up the smell of freshly-brewed coffee!

I tried Avocado shrimp salad, which is their signature menu item, along with an Apple Tea Ade. The star point of this brunch was the fresh ingredients. Plus, there also there are other open sandwiches menu made with Shrimp, Bacon, and cheese that I’m sure are just as delicious as what I had.

It often has a line outside because they are one of the most popular brunch places near Anguk station. Nevertheless, it is worth the wait. You can enjoy your brunch with reasonable prices, fresh ingredients, and good vibes.

Hello, I'm hyeah! I'm Korean, based in Seoul. I love to journey whole regions in Korea, especially in Seoul! And I'm blogger specialize in lifestyle in Seoul, fashion, culture, work and beauty!