Korean food was a game-changer for me. Before coming to South Korea, I didn’t have the opportunity to try Korean foods. Back in Nigeria, what little exposure I had was through movies, hence I didn’t know much. However, ever since my first taste of Korean cuisine I was hooked and I’m never going back! And so, here are 15 of the best foods that you should try if you are new to Korea.

The Most Refreshing of Korean Foods

Bossam is a boiled pork dish. The meat is boiled in a broth that contains star anise, ginger, scallion, garlic, soybean paste, and tea leaves. Afterward, It is rinsed in cold water. 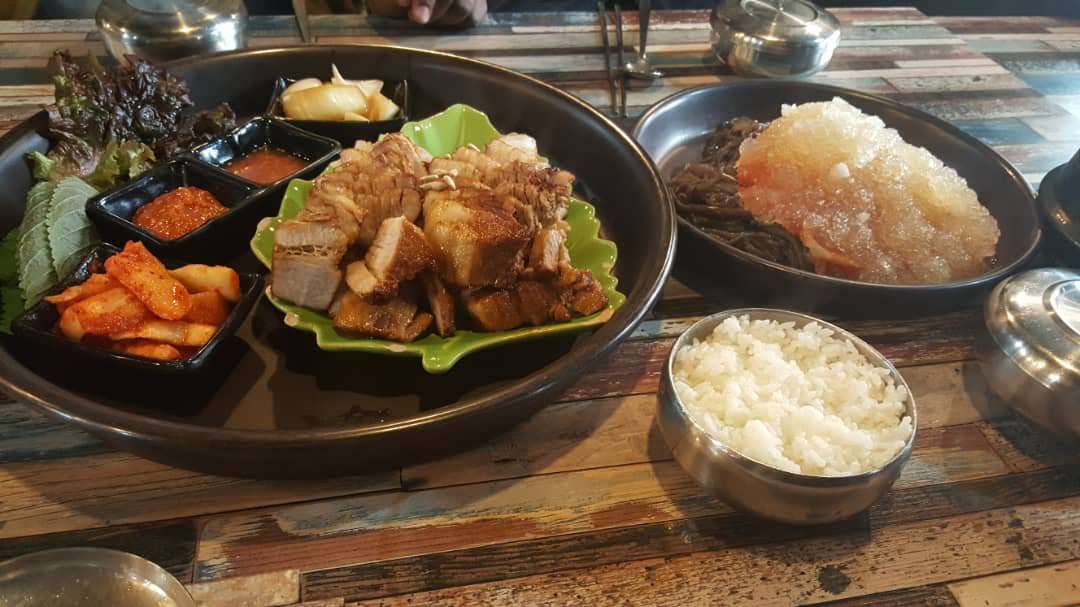 Bossam is usually served with a variety of sides like sliced raw garlic and kimchi. Normally, a bowl of cold noodles and tofu soup is served on the side. As the name implies, the pork meat is usually wrapped in vegetables like lettuce or perilla before eating.

The Best Grilled of Korean Foods 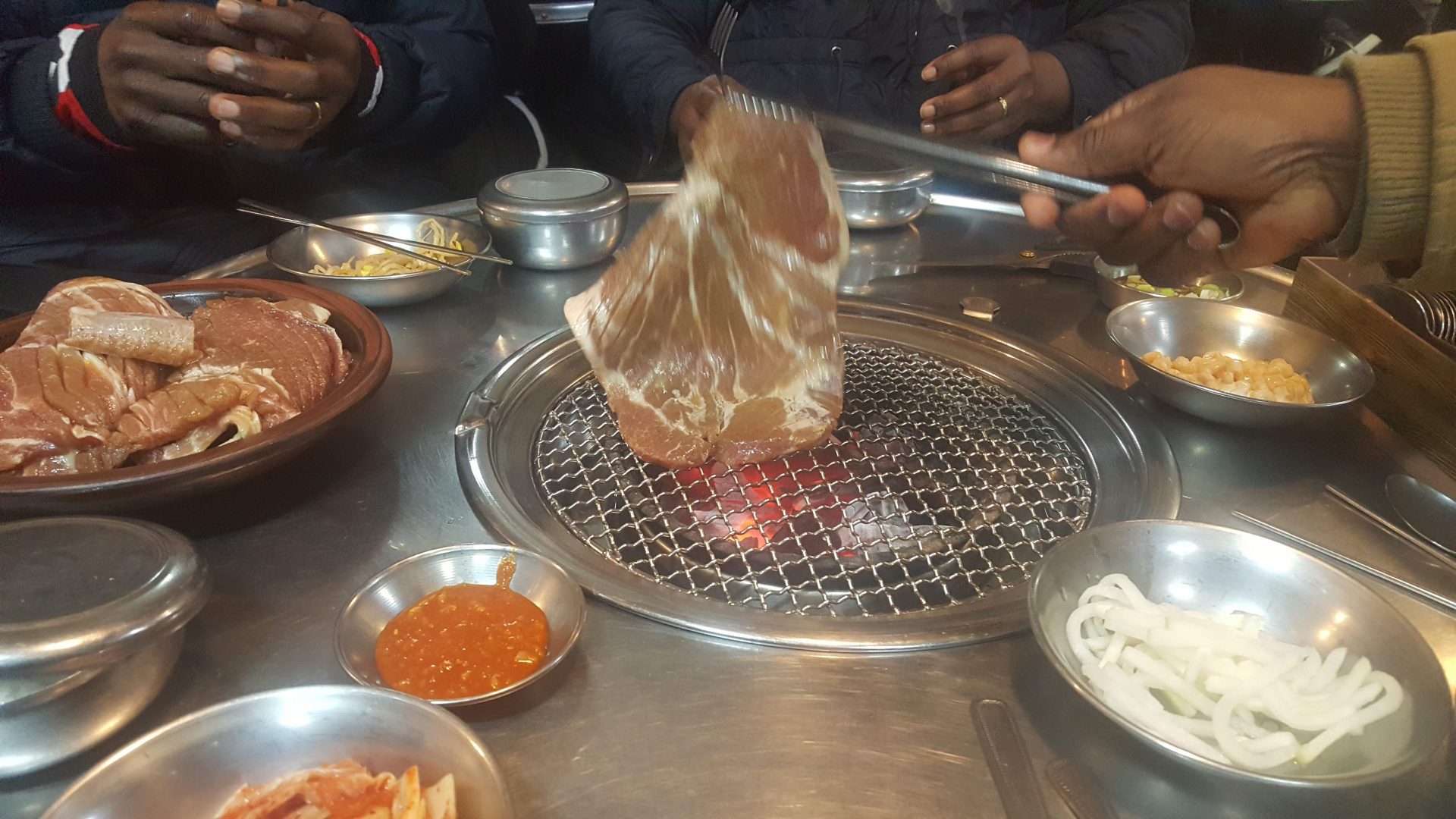 Bulgogi comes from the Korean words bul (“fire”) and gogi (“meat”). It is a juicy dish of grilled marinated beef or pork. The meat is often grilled with garlic with sliced onions, which enhances the amazing flavor. It can be eaten with steamed Korean rice and side dishes. You can also eat it by wrapping it in lettuce or perilla leaf. And, don’t forget to throw some chili paste into the mix!

The Most Diverse of Korean Foods

Mandu is the general term for Korean dumplings. They can be prepared by steaming, pan-frying, boiling, or deep-frying. There are a variety of mandu fillings. Some of the most common mandu are gogi mandu with meat as the main filling, kimchi, yachea (vegetables) and shrimp. I have eaten all, and gogi mandu is my favorite. Yeah! I am a meat gal.

The Most Internationally Recognised of Korean Foods

Samgyeopsal is the most popular form of Korean barbecue, and perhaps the most popular of Korean foods globally. It is pork belly with three fat layers, the same cut as bacon. In Korea, it’s one of the cheapest barbecue options and is often served buffet style. Once your meat is cooked, you cut them into bite-sized strips and wrap in lettuce or eat them with rice.

If you’re in Korea, you can find high-end options such as Jeju black pork samgyeopsal and ogyeopsal. Jeju island has a specific type of black pig, bred for Korean barbecue. If you ever come to Korea, give it a try! As for ogyeopsal, it has 5 layers of fat instead of three. The extra fat layers make the flavor out of this world!

The Most Comforting of Korean Foods

Manduguk  is popularly eaten on Korean new year’s day. The meal is made by cooking the dumplings in an eggy beef or anchovy-based broth. It makes a great meal during cold months. It’s one of those home-cooked-style Korean foods that warms your heart.

The Most Healthy of Korean Foods

Bibimbap literally means mixed rice. It refers to a bowl of warm white rice topped with a variety of sauteed and seasoned vegetables. Egg and sliced beef, are often added on top, they can be raw or cooked. Before you start eating, you should mix everything together. The result is a refreshing, delicious, and healthy meal.

The Best of Chinese Korean Foods

Jjajangmyeon is one of the most popular examples of Chinese Korean foods. It is made with thick, wheat noodles topped with a black bean sauce. This dish dates back to the late 1800s. It was created by the Chinese immigrant community in Incheon.

The Most Frequently Eaten of Korean Foods

Kimchi is a traditional side dish made from salted and fermented vegetables. There are actually hundreds, if not thousands of different types of kimchi. It is undoubtedly the most commonly eaten category of Korean foods. However, normally when you refer to kimchi without specifying the type, people assume the most common type.

The most common variety of kimchi is spicy Nappa cabbage kimchi. It is made by fermenting cabbage in a mix of chili powder, chili paste, salt, ginger, garlic, and seafood. Normally each family has their own recipe. And so, no two kimchi dishes are alike.

The Cheesiest of Korean Foods

Dalk galbi is a Korean spicy chicken stir fry. It is cooked on a huge pan and usually eaten communally on the table. The chicken is chopped and marinated in a mix of spicy Korean sauce and other ingredients. It’s common to see dalkgalbi feature rice cakes, sweet potatoes, green cabbage, and perilla leaves. However, these days the most popular dalkgalbi is served with gooey melted cheese. I’ve got to say – it is a match made in heaven.

The Most Savory of Korean Foods

Galbi jjim is braised beef short ribs. This meet dish is always slow-cooked and the result is a mouth-watering succulent dish. If the meat isn’t falling off the bone – if wasn’t done right. Not only are the ribs amazingly tender, but they are also seasoned to perfection. Galbi jjim sauce is sticky, spicy, and sweet.

The Most Invigorating of Korean Foods

Samgyetang is one of the more interesting dishes in Korean cuisine. It literally means “ginseng chicken soup”. The dish is made from a young chicken stuffed with rice and boiled in a broth of Korean ginseng, jujube fruits, garlic, ginger, and various herbs. It is Korea’s go-to dish if you are feeling under the weather.

The Best of Korean Street Foods

Tteokbokki is THE most popular Korean street food in Korea. They are chewy, cylindrical rice cakes simmered in a sweet and spicy sauce. Most stalls also add some fish cakes to the mix. It is the perfect snack food if you are traveling in Korea!

The Best of Korean To-go Foods

Kimbap is sort of the Korean version of a sandwich. It includes vegetables, rice, and cooked proteins wrapped in a sheet of seaweed. It is a convenient food that you can grab and eat on the go. They are available at every convenience store throughout the country.

The Best of Korean Stews

Jjim refers to dishes that are steamed or stewed in a sauce, and dalk means chicken. Chimdak is usually served in a large bowl with potatoes, rice cakes, mandu, and noodles. There are two types of sauce; black and red. I have had both the black and red sauce, and they are both delicious.

The Best of Korean Soups

Galbitang is a clear soup made with beef short ribs. It is a healthy, delicious meal. Typically, the ribs are boiled along with Korean radish, onion, garlic, and ginger until tender.

Once you’ve made your way through this list of Korean foods, Click Here to read about 9 of the best Korean soups and stews!

Which Korean foods do you love most? Let me know in the comments below! 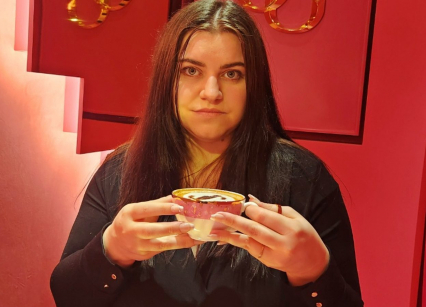 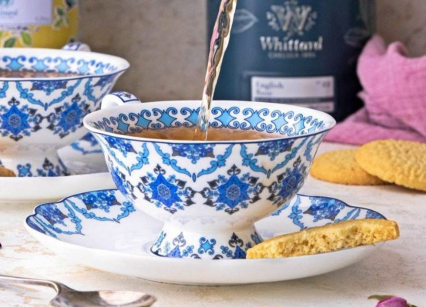